Accessibility links
Why It's Never Too Late To Rescue Failing Students : NPR Ed By the time a teenager is ditching classes and hanging with wrong crowd, is it too late? One woman set out to prove that with the right support, these students can make it. 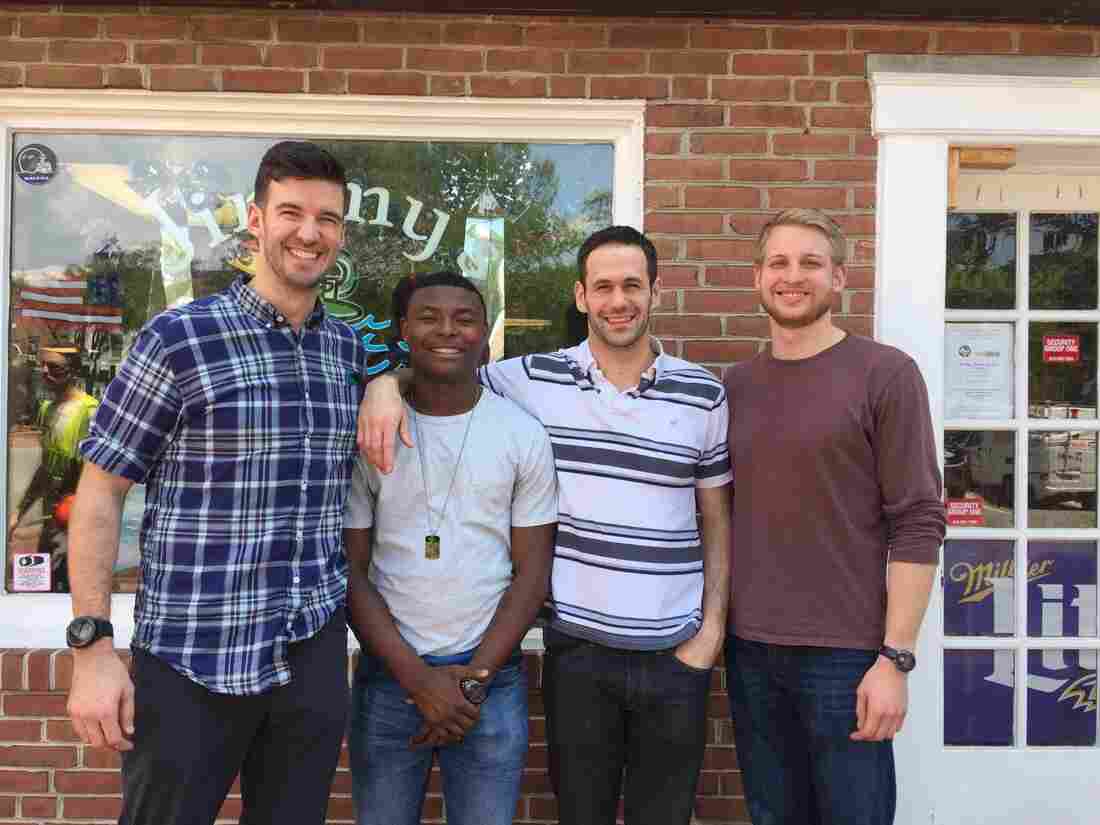 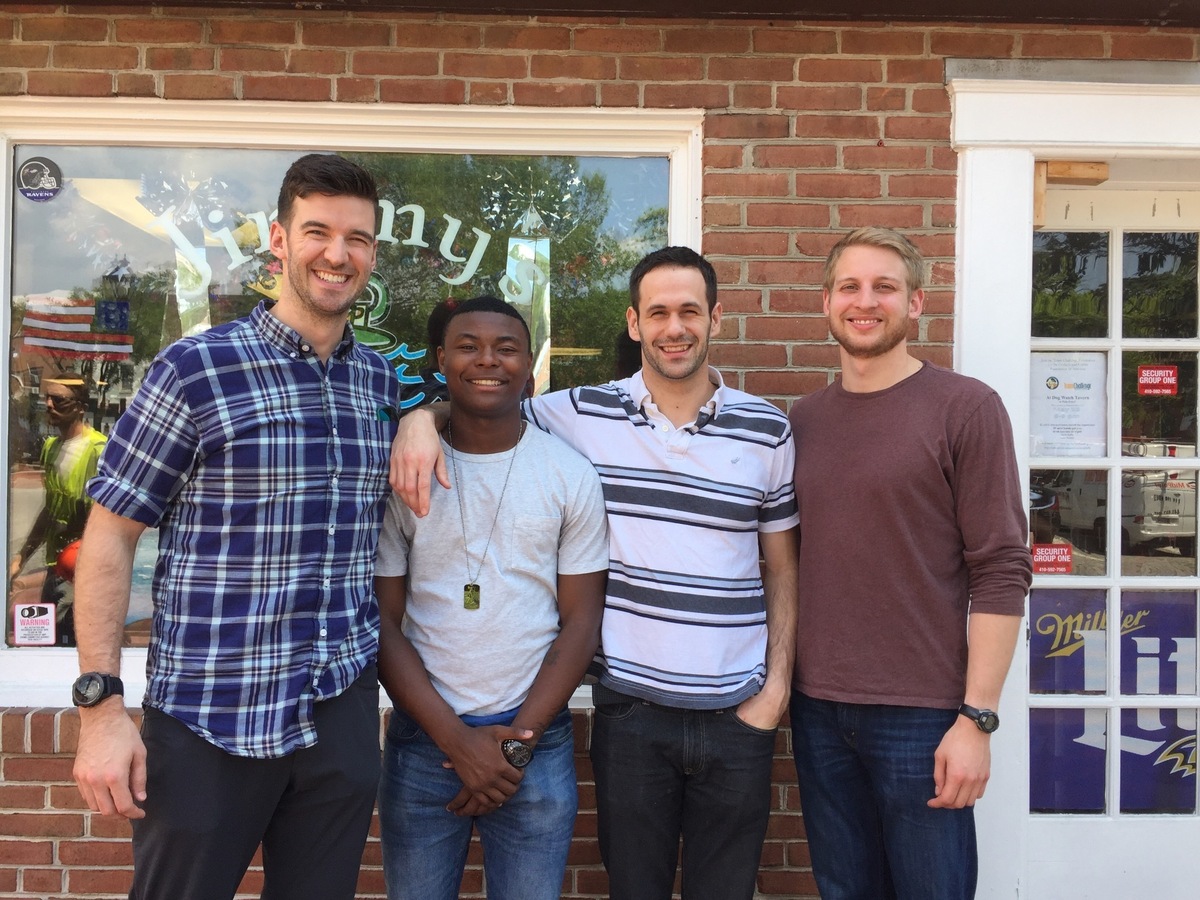 Mentors Chris Regan, Jordan Wagner and Eric Schiffhauer pose for a picture with Jebree Christian, a recent high school graduate from West Baltimore, in front of Jimmy's on Baltimore's harbor.

Four guys walk into a diner.

One, in a plaid shirt, sells golf equipment online. His name is Chris Regan. Two — Eric Schiffhauer and Jordan Wagner — are midway through their Ph.D.'s at Johns Hopkins University.

And the other, Jebree Christian, is a recent high school graduate from West Baltimore. His arms are covered in tattoos, most of them commemorating someone he has lost.

Each Sunday, they gather here at Jimmy's on Baltimore's harbor.

What are they doing? Technically, they are part of an effort to change the social fabric of their city, building connections between different sides of town. But mostly, they're laughing.

"Is that a mushroom?" Christian asks in faux outrage when Regan's vegetarian breakfast bowl arrives.

"You are killing animals, man," Regan responds without hesitation, looking down at Christian's bacon and sausage medley.

Hours pass as they banter and reminisce: a failed trip to get a driver's license. A plan to get rich by investing in toilet paper. And a college visit this past year to Ohio State.

"I drove and Jebree slept the entire way," Regan remembers.

"They came and got me at 5 o'clock in the morning," Christian protests.

There was a time when the idea of Christian going to college was not in the picture.

He grew up in a tough neighborhood where gun violence was common. And, he says, things were particularly challenging after his baby sister died.

"It was a struggle," Christian recalls. "It felt as though I had to mature real fast."

Christian bounced around, from house to house, adult to adult.

He says he learned how to do much of the cooking and cleaning. "At 13, I mean I knew how to do everything there is possible to do." He made sure he got to school on time. "I had a perfect attendance rate all through middle school."

Then, in high school, he hit a rough patch.

"I started hanging with the cool kids," Christian remembers. School was the first casualty. He finished the fall quarter of his freshman year with a GPA of 1.6.

But his low grades qualified him for a second chance — a nonprofit called Thread.

Unlike most programs that select high-scoring, promising young people, Thread chooses those who are most at risk: high school freshmen from Baltimore public schools who are struggling at school and who lack stability at home. The average GPA is 0.15.

Those students are given five volunteers chosen from the community. Together they become a Thread Family.

"The five volunteers do anything you would do for your own child: pack their lunch, give them a ride to school, help them find a summer job," says Sarah Hemminger, Thread's founder.

So how does it work? The five volunteers act as a team. For example, one drives to the student's house to pick her up for school. A few hours later, another goes to the school to see if she's still there. If she's not, another volunteer goes back to the house to drive her back to school.

Thread kids get such intensive support for 10 years, although the number of volunteers tapers off eventually.

Since 2004, Thread has worked with hundreds of students. So far, 92 percent have graduated from high school and 80 percent gone on to complete some form of higher education.

But Hemminger says that's not actually the goal. Instead, her goals for Thread students are the same as her goals for her own daughter. "What I really want is for her to figure out what she's great at in life and I want her to have purpose," she says.

"Every single student I can think of has, at some point, said they are dropping out of Thread," says Hemminger. Her response: "We just ignore it."

Volunteers who keep showing up

Christian remembers that phase. He signed up because there was free pizza at the meetings. But then, he recalls, a volunteer started showing up at his house.

"Who is this man outside my house?" Christian remembers thinking. He refused to come out of the house and, when he did, he told the man he'd come to the wrong house.

Eric Schiffhauer also remembers that phase: "He would throw earphones in his ears and he wouldn't talk to us."

Christian says his big worry was that these guys would disappear within a few week or months, just like every other volunteer and tutor he had known. But Schiffhauer and the other volunteers kept showing up — every day.

Christian says it all changed when they discovered a shared passion: "We love Chipotle."

Soon, they were going to Chipotle for dinner every day — except Sunday, when they have brunch at the diner.

"We've done 12-page research papers in Chipotle. We've applied to college from Chipotle." When the Baltimore riots happened, less than a block from Christian's house, Schiffhauer says, they discussed it at Chipotle.

And there are field trips: visiting colleges, hanging out with Christian's family or getting him a Social Security card and a bank account.

Now, Schiffhauer says, Christian is taking the lead on setting up times to meet and goals to accomplish. "We're sort of transitioning to a period where he's solving his own problems."

But Christian insists they'll still stay in daily touch — even when he heads to college in the fall.