Accessibility links
When Teachers Take A Breath, Students Can Bloom : NPR Ed An evidence-based program teaches mindfulness to educators. Research suggests it can reduce their stress and improve their teaching. 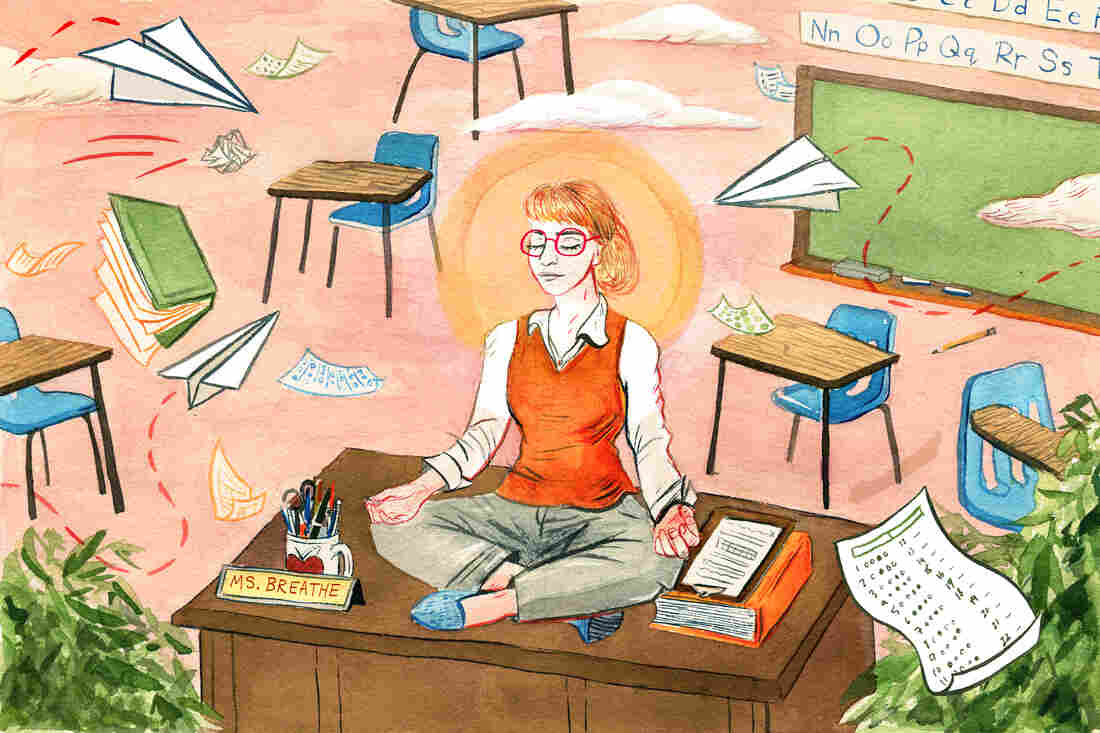 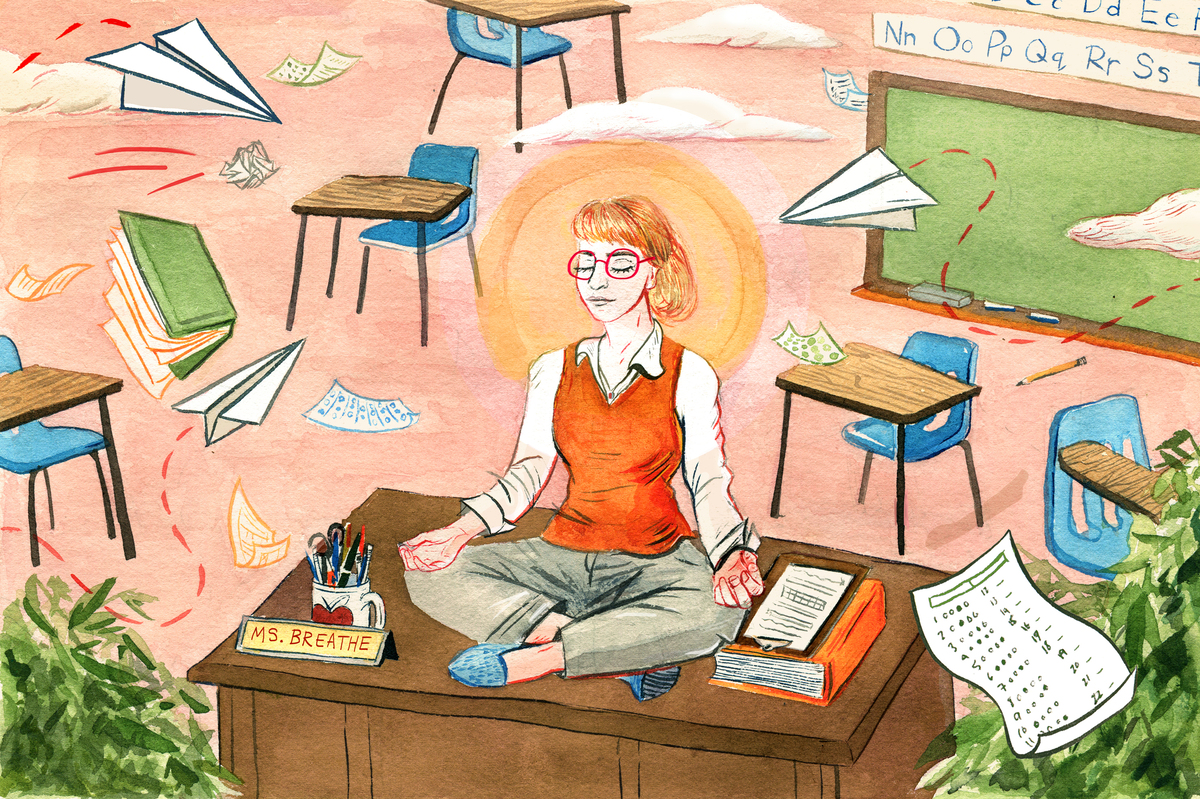 Garrison Institute looks a little like Hogwarts. The retreat center is housed in a former monastery amid tranquil green hills overlooking the Hudson River, 60 miles north and a world away from New York City.

Inside the airy chapel on a recent summer afternoon, about 35 educators from the U.S. and at least five foreign countries are seated quietly, shoes off.

"Just notice your breath, the sensation of your air coming in, going out," says Christa Turksma, a Dutch woman dressed all in white with silver-white hair. She's one of the co-founders of Cultivating Awareness and Resilience for Educators, or CARE for Teachers.

For the past nine years at this annual five-day summer retreat, and now within schools, CARE for Teachers teaches what's called mindfulness: calming the body and mind through breathing and movement, and using insights from psychology to better regulate your emotions.

They do a series of role-playing activities to practice listening and conducting difficult conversations with a boss, fellow teacher, parent or student. It's the first mindfulness program to be studied with funding from the U.S. Department of Education — and aimed at teachers, not directly at students.

Teaching is inherently a stressful occupation, and by many accounts, it's getting more so. Students bring the effects of poverty and trauma into the classroom. Administrators lay on the pressure to meet ever-changing standards. In the last few years, teacher job satisfaction has reportedly plummeted to a 25-year low, and turnover is high — almost 50 percent for new teachers.

Patricia Jennings isn't necessarily out to change all these factors. Instead, she aims to help teachers become the change they wish to see in the world.

Jennings is the second co-founder of CARE (Richard Brown is the third). She has gray hair cut straight across in bangs and a beatific smile. Jennings had a difficult childhood; she was orphaned at age 14 when her mother committed suicide.

Then, as a college student in 1970s Arizona, she discovered Zen meditation. "I started realizing that a lot of the suffering and anxiety I was feeling — that those thoughts were not me," she says. "That was a huge revelation, to go oh, this feeling of dread is a result of this experience, but it's not who I am and I can let those thoughts go."

Jennings studied at the Buddhist Naropa Institute (now Naropa University) in Boulder, Colo. She earned a degree in psychology and a teaching degree, then founded a Montessori school where she taught kids meditation as early as 1980.

In the classroom for over two decades, she also used mindfulness techniques moment-to-moment, whether to smooth transitions between activities or when figuring out what was really going on with a student who was acting up. Later, she took a position teaching teachers, and realized that other teachers could benefit from these tools as well.

Jennings is now an associate professor of psychology at the University of Virginia, where she conducts research on the CARE for Teachers program.

In a soon-to-be published study, Jennings and her co-authors provided an extended version of CARE training to 224 teachers in high-poverty schools in New York City, with several two-day sessions spaced over the course of a year. The participants reported that their anxiety, depression, feelings of burnout, being rushed and perceived stress all went down compared with a control group. Their sleep improved, and the teachers said they felt less judgmental.

Among the students who rated lower on social skills at the outset of the study — presumably some of the most vulnerable — reading scores also improved. Again, these effects came from working with the teachers, not directly with the students.

Bonnie Kirkwood and Michele Coyle-Hughes work at P.S. 279 in the Bronx. They spent the school year that just ended helping teach CARE techniques to their colleagues.

They are back at the CARE For Teachers retreat to figure out how to spread it further. As part of the student support staff, "I deal with teachers in crisis," says Coyle-Hughes. "I can see that they need more tools."

About a third of the students in their K-8 school come from homeless shelters. A large percentage have incarcerated parents or are in foster care. Most are English language learners, including a refugee population.

"Our kids gravitate to our building because they want structure and routine," says Coyle-Hughes. Kirkwood, a reading specialist, says the CARE techniques have improved her relationships with students and colleagues. "I'm learning to let go and let God," she says.

(Although the practices taught in CARE draw on many different traditions, Jennings makes clear that the program is entirely secular and suitable for public schools. For example, they use the term "mindful awareness practices" rather than "meditation.")

Like Coyle-Hughes and Kirkwood, Nicole Willheimer has also agreed to help facilitate CARE training for her colleagues, at P.S. 140 in the Bronx. Jennings and Turksma are trying out this expansion this year, called CARE Coordinators, with the idea that these techniques will best spread from colleague to colleague, not as a top-down push from administrations.

Willheimer says the program has helped her be more attuned to her students. For example, rather than be set off by a kid who is tapping on a desk, she can recognize if he or she is trying to cope with attention difficulties. And like other teachers, she says CARE has been most helpful in dealing with her bosses, not just with students.

"When administrators call you, you never know what they want. It could be a parent is upset with you, or you forgot something," she says. "I used to rush to meetings, grab a seat, and jump in. Now, I practice mindful walking. I think about where I'm going. When I arrive, I'm not revved up. I'm able to receive criticism or conversation without being triggered."

In the training, CARE participants talk a lot about "triggers" and "scripts" and being "reactive." Past experiences may shape your perception of a situation, and bring on too-strong or inappropriate emotions. If you are "reactive," you'll succumb to those emotions, following the unconscious script in your head. If you are "reflective," you'll be able to pause and get a more accurate read on the situation.

In one session Jennings tells a story recounted in her book, Mindfulness for Teachers, of a previous CARE participant who was immensely bothered by a 7-year-old student who was late every day and disrupted the whole class with laughter. On reflection, the teacher remembered that in her own family, there had been severe punishments for being late. She sat down and talked to the girl and learned she was the daughter of a single mother who worked nights, so the little girl was responsible for getting herself to school every morning. And her giggling wasn't intended to be disrespectful — it came from embarrassment.

After a lunch of beet salad, quinoa and garden greens, the teachers disperse outside for a walking exercise and paired discussions. Here amid the wildflowers and butterflies, it's easy to feel tranquil.

But in a few short weeks a new school year will be starting. "I can feel my heart start to race when I think about September getting closer," one teacher says in a session. "In September there is NO space. If you were walking into an inner-city urban school this September, what two CARE practices would you bring?" she asks Jennings.

Jennings replies that she has an empirical answer, from the forthcoming study, where they asked all the teachers the same question. Their top answer was simply stopping yourself, whenever needed, to take three deep breaths.

And the second answer was cultivating a daily practice in breathing, mindful walking, yoga or other relaxation discipline. "That helps you remember to take the three breaths when you need it!"

CARE Techniques To Try In The Classroom

Mindfulness for students and teachers