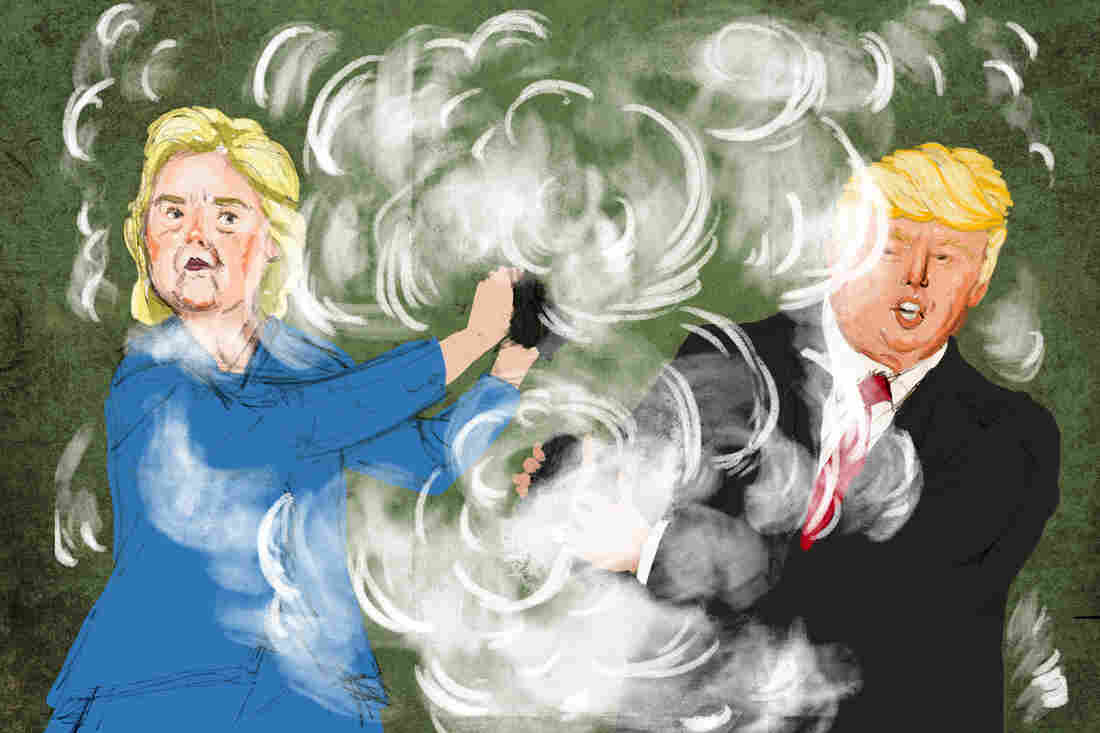 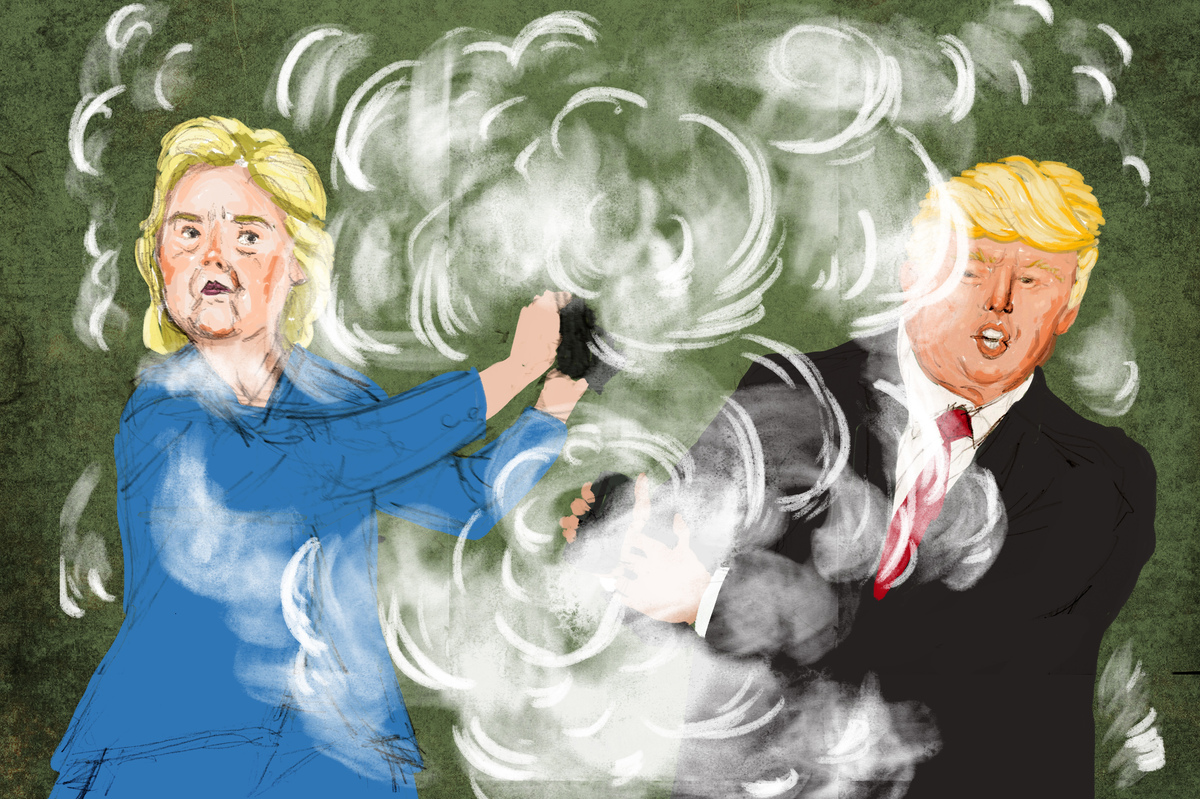 "I'm a tremendous believer in education."

But what does that mean?

What does Trump believe about how we should fund and fix our schools, train and pay our teachers, and, most importantly, educate every child whether they're rich or poor, fluent in English or anything but, learning disabled or two grades ahead?

To these questions the candidate has offered few clear answers.

"Donald Trump's policy positions are performance art." That criticism comes not from the left but from Rick Hess, who studies education policy at the right-leaning American Enterprise Institute. And, Hess says, "it is an immense mistake to take any of it all that seriously."

Hoping to flesh out Trump's education ideas ahead of tomorrow's big presidential debate, we asked his campaign for help. They never got back to us.

We also reached out to the two men who, as reported by Education Week, have been named to the candidate's presidential transition team for education. Both said they could not talk without permission from the Trump campaign, permission that was not granted.

And so, in trying to get a picture of his education platform, we're left mostly with the candidate's own words.

Let's start with the rest of that campaign ad:

"I'm a tremendous believer in education. But education has to be at a local level," Trump says from his leather office chair, looking directly into the camera. "We cannot have the bureaucrats in Washington telling you how to manage your child's education."

This is a common theme for Trump: Washington needs to butt out of our schools.

"There's no failed policy more in need of urgent change than our government-run education monopoly," he said earlier this month at a campaign stop in Cleveland.

In this story line, schools are the business of the local community — of the district — and the U.S. Department of Education is Public Enemy No. 1, pushing down onerous rules that make life harder for educators, students and parents.

That would be a profound policy shift from past presidents and one worth reckoning with briefly here.

It's not clear if Trump, in cutting the Department, would also cut the services that it provides, but, since his conversation with Wallace was in the context of broader spending cuts it's reasonable to assume he would.

Those services include providing roughly $15 billion in Title I funds to help schools that educate at-risk students, more than $12 billion for students with special needs, and some $29 billion in Pell Grants to help low-income students pay for college (all according to 2016 Congressional appropriations).

On February 10, 2016, Trump tweeted: "I have been consistent in my opposition to Common Core. Get rid of Common Core — keep education local!"

In that campaign ad on his website, Trump is even more colorful: "Common Core is a total disaster. We can't let it continue."

The Common Core are learning standards in math and English language arts that were developed through a collaboration between the National Governors Association and the Council of Chief State School Officers. According to the Core's website, they're being used in 42 states and the District of Columbia.

The Core were adopted by states at the state level. There was no top-down vote from Congress, no presidential signature. Yes, President Obama and his Education Department dangled money in front of states who agreed to do many things, including adopt rigorous new standards. But Washington could not, and did not, force the Core on states. As such, if states want to repeal the standards, they can and have. But a President Trump ... couldn't.

Besides, if he tried, it might feel an awful lot like "the bureaucrats in Washington telling you how to manage your child's education."

Earlier this month, in Cleveland, Trump unveiled perhaps the most specific education proposal of his campaign.

"As president, I will establish the national goal of providing school choice to every American child living in poverty," Trump said. "If we can put a man on the moon, dig out the Panama Canal and win two world wars, then I have no doubt that we as a nation can provide school choice to every disadvantaged child in America."

The plan would involve a $20 billion government investment, "reprioritizing existing federal dollars." The money would go to states as block grants and follow disadvantaged students wherever they go: to a traditional public school in their neighborhood or elsewhere, a charter school or even a private school.

While Trump made clear the $20 billion would not be new money, he did not say where he would find that much old money to reprioritize.

This idea, known as portability, is popular in conservative circles because, it is assumed, the competition that comes with choice would force struggling public schools to improve or close. But it worries many student advocates because, they say, it would also drain money from the schools that need it most and send taxpayer dollars to well-resourced private schools.

As with K-12, Trump has said little in detail about planned policies for higher education.

In May, a senior Trump policy advisor, Sam Clovis, did tell Inside Higher Ed that a Trump administration would work to get the government out of the student loan business and restore lending to private banks. The debt issue has gotten a fair amount of attention, as we've covered here, here and here, among other stories.

Would a push to privatize student lending work?

"I just don't think that's realistic," says Eric Hanushek, a Senior Fellow at the Hoover Institution, a conservative-leaning think tank at Stanford University. The government has historically played a key lending role and is likely to continue, Hanushek says. "Private lenders are not about to enter into that market sufficiently to make loans to all students. It would be wise not to get the government out of student loans altogether."

The basic mechanics of implementing that kind of public-to-private switch, says Deborah Seymour with the American Council on Education, "would require such a complicated plan that making that happen might take longer than he's probably currently projecting."

Hanushek adds that many of Trump's statements on education and other topics "are vague, and you could interpret them in many ways."

Finally, Trump's take on childcare. The pitch, on his website, tells us what most parents know all-too-well: "Raising a child is now the single greatest expense for most American families — even exceeding the cost of housing in much of the country."

What would President Trump do about that?

He's proposed making all childcare costs tax-deductible for kids up to 13 years old — and for up to four children per household. Deductions would be limited to a state's average childcare cost and to families earning less than $500,000 a year.

Returning to a common theme for Trump — choice — the proposal would cover "a variety of different kinds of childcare—institutional, private, nursery school, afterschool care, and enrichment activities."

Trump's proposal, which he unveiled earlier this month, would also provide six weeks of unemployment benefits to all new mothers. While states cap those benefits, the proposal would be an improvement for many new moms and a big change from current federal policy (which pays them nothing). That said, the plan did raise eyebrows for one word conspicuously missing: Dads.

A lot to digest — but still surprisingly few classroom specifics.

Both candidates, Eric Hanushek says, have largely side-stepped specifics about K-12 education. Clinton talks about universal pre-K and Trump a little about student loans, he says, "but there's this gaping hole in the middle called K-12 education." It's troubling, Hanushek says, as education is "second only to national security" in national importance.