Accessibility links
Shaken By Economic Change, 'Non-Traditional' Students Are Becoming The New Normal : NPR Ed The massive growth in the adult student population in America's colleges and universities — one quarter of all college students are over the age of 30 — is changing the higher ed landscape. 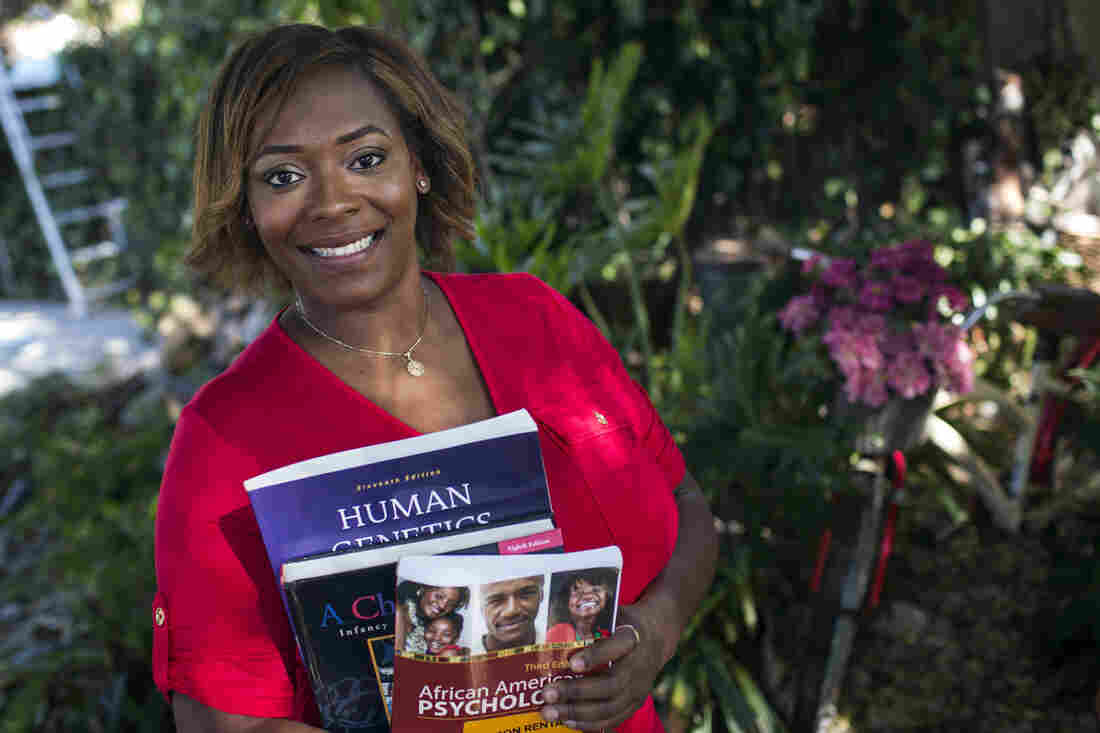 Asia Duncan, 30, is formerly a seller for a jewelry maker. Now, she's attending Pasadena City College and is working to be a doctor. Maya Sugarman for NPR hide caption 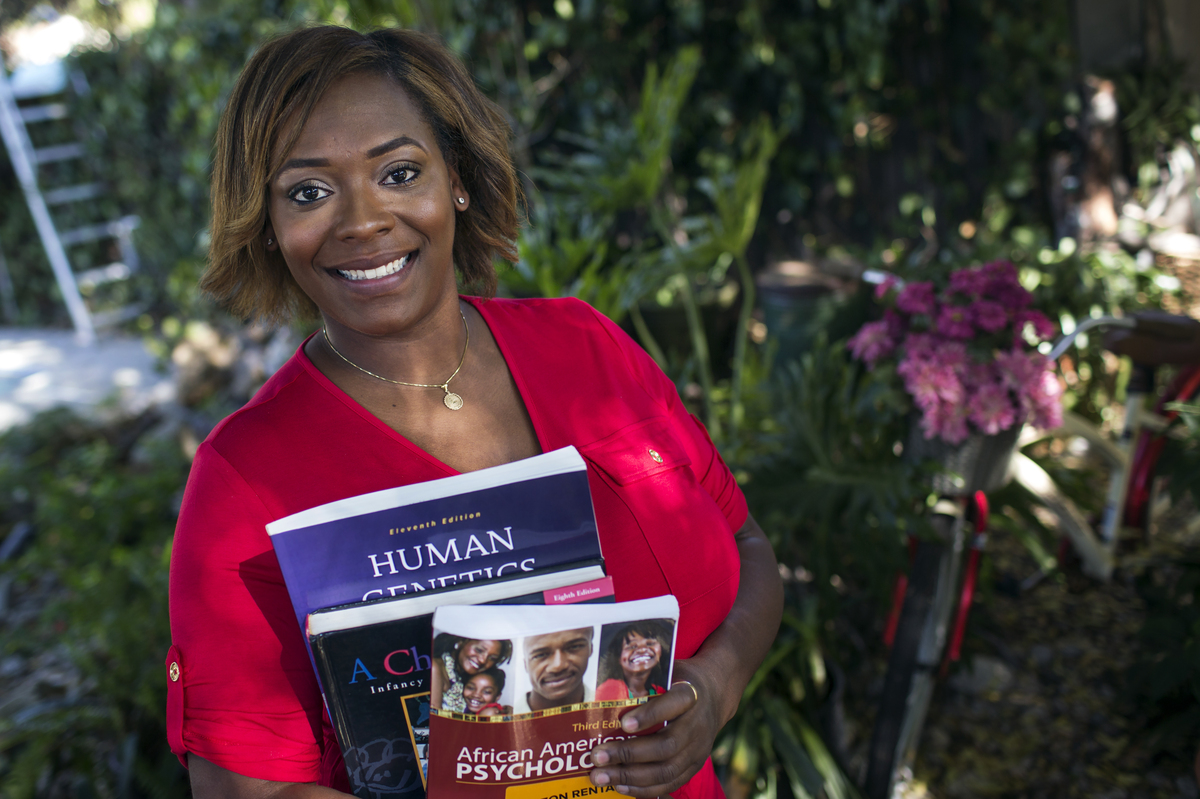 Asia Duncan, 30, is formerly a seller for a jewelry maker. Now, she's attending Pasadena City College and is working to be a doctor.

New community college student Asia Duncan makes her way to class up an outdoor stairwell on the sun-filled campus of Pasadena City College in southern California.

"I'm actually headed to an 'Intro to College' class," she says. "They're teaching you about college and what's a unit."

It's a class about taking classes?

"Exactly," she says, "It's telling me where on campus I can find different resources. So some of it is helpful."

The resources Duncan needs most now may not be things the school can help much with: childcare and income.

Duncan is a 30-year-old single mom with two boys: Leo, 8, and 18-month-old Ray. The father of her children, she says, is not yet paying child support.

"Now everything is kind of falling on my lap: two kids, I've got to kind of get my priorities in line and go back to school and do what I need to do." 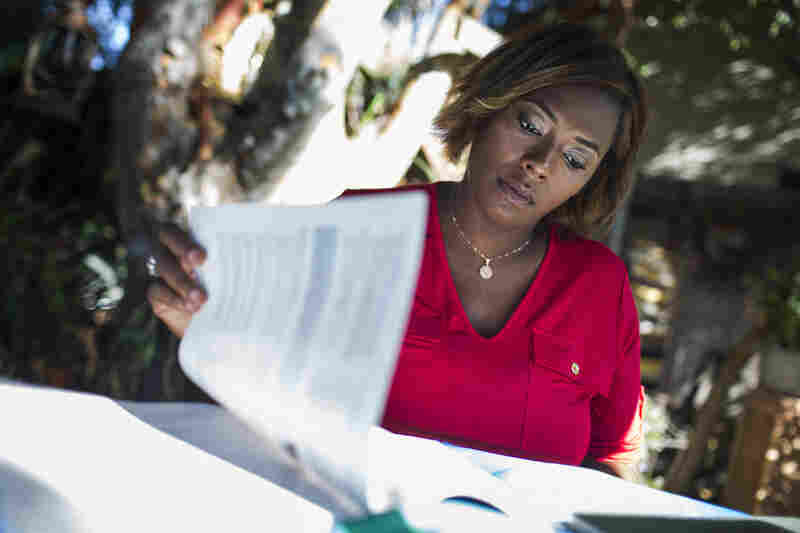 Duncan studies for a modern genetics class in the backyard of her Pasadena home. Once in medical school, she's hoping to go into dermatology. Maya Sugarman for NPR hide caption 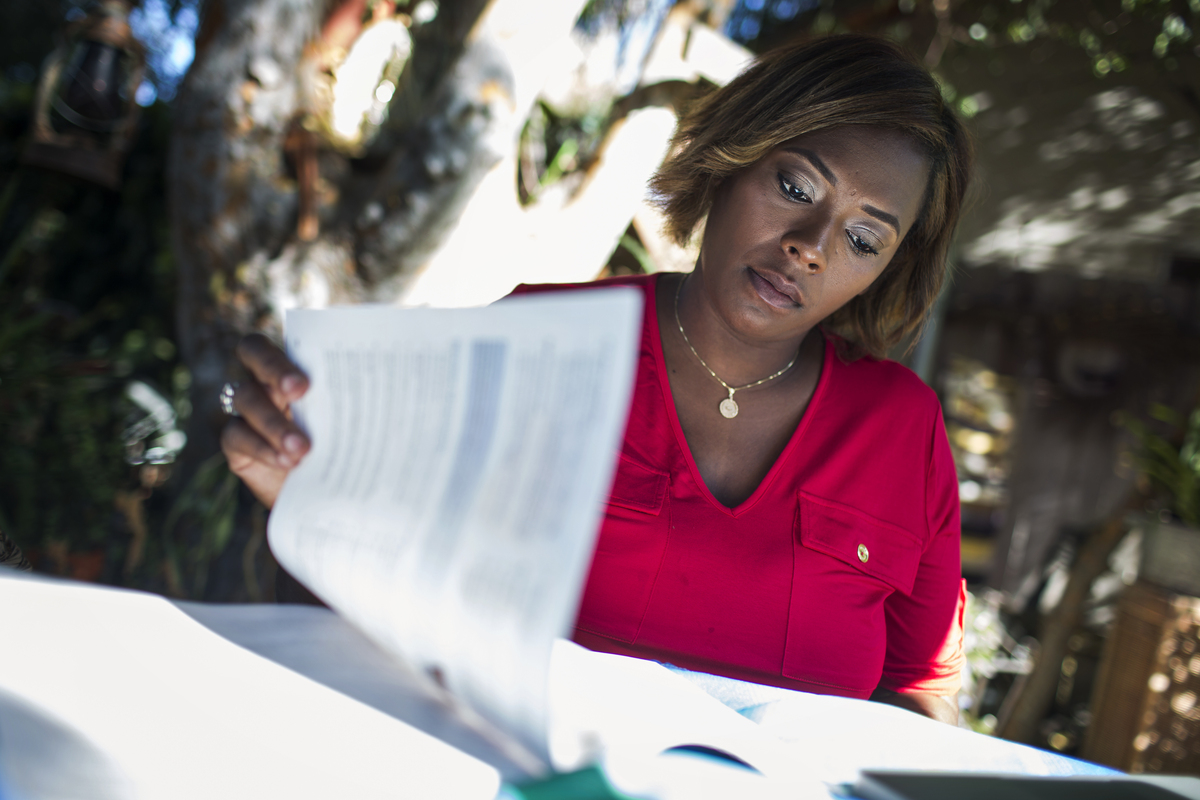 Duncan studies for a modern genetics class in the backyard of her Pasadena home. Once in medical school, she's hoping to go into dermatology.

Fresh out of high school, Duncan went into the retail jewelry business.

She earned a gemology certificate and worked in retail and corporate jewelry sales in Washington State and Louisiana for more than a decade. "I assumed I was going to live and die in the jewelry industry and work there forever, really."

These days, free babysitting from her grandmother who lives nearby helps a lot. And federal Pell Grants make a big difference with tuition.

But it's a struggle. She's now looking to take out student loans -– soon.

She's happy, though: She's getting good grades at Pasadena City College, which she says has been welcoming and supportive.

"I didn't really realize that I was going to like it so much. I think it's just the excitement of where this education is taking me."

She hopes it takes her on to a four-year school and, eventually, medical school — maybe dermatology: "I think I just want a job, a position, a career where I don't have to worry about money. I don't have to think about that. And I also want to be able to help someone."

While colleges and universities have seen enrollment growth follow every recession since 1980, the boost in enrollment following the Great Recession was far greater than previous.

And a growing number of those students enrolling are older, working, have a family -– or all three.

Nearly half of those enrolled in higher ed today are so-called "non-traditional" students. One quarter of all students are over the age of 30.

The increase is driven mostly by tough financial realities and a changing economy.

Duncan says she felt some angst about going to college later than most. How will I relate to 19- or 20-year-olds, she thought?

Yet they've been supportive and helpful, she says, even though she sometimes feels a little "hungrier" for school than some of her classmates.

"When I say hungrier, I mean I have to get this done. It's not an option for me. I can't take another two years off from school. I can't afford it. These younger students, they do have an opportunity to maybe postpone school and go and figure themselves out. A lot of younger students, they don't know — and that's OK," she says, adding "I'm coming in a little bit older and a little bit wiser and know what I want."

Chuck Sewell is another adult student taking that journey.

He grew up in a large, poor and — by his own account — dysfunctional family. He left school after the fifth grade to help care for his siblings. He eventually got a GED.

By his late teens he had found a career path — residential real estate -– and ran with it. Over the next three decades he built a successful business flipping homes, renting homes, staging properties and serving as an agent.

But when the Great Recession hit, that all came crashing down. He lost everything. For a time he was living out of his truck. "Ended up homeless. Didn't have very much money left," he says. "It was a tough time to go through. Emotionally, psychologically - it was very difficult."

After a few years adrift — "I think I was in shock," he says — Sewell found the strength to make a change. "I knew I needed to support myself for the rest of my life. I decided to go back to school. I'd always wanted an education. I felt cheated out of my education because of my childhood and was very eager to go back. That was exciting to me," Sewell says.

Now, at 58, Sewell is getting straight A's at Pasadena City College.

Inspired by his own financial and emotional challenges after wiping out during the recession, he wants to eventually get a master's degree in social work. "I want to give back," he says, "I want to help people."

Duncan and Sewell are hardly alone: Almost half of all undergraduate students in higher education today can be categorized as "non-traditional." At America's community colleges, those students are the vast majority.

Those realities underscore how outdated the term "non-traditional student" really is, says Yancey Gulley, an assistant professor at Western Carolina University. Gulley says that label sends older students a damaging message "that this place 'is not made for me.' We just keep 'othering' them and reminding them that this is a chance we're giving them, we actually don't think we belong here."

The terminology debate gets to a much larger issue: Gulley argues that too few four-year institutions are adequately addressing the fact that they are run on the antiquated idea they mainly serve students in the 18-to-24 range.

More and more schools "are having to adapt their policies and practices around these older learners," says Deborah Seymour with the American Council on Education's Center for Education Attainment and Innovation. "They can't isolate themselves from what is slowly becoming more than 50 percent of the student population," she says.

The hurdles for older students, she says, are often greater: many are juggling work and family with school. Many need to catch up on basic courses. "And the pressures are greater," Seymour says, "they may have fewer years left to work. It's a very practical challenge for people."

More colleges and universities need to become better equipped to address the needs of older students, she says. And soon. The already large adult student population is projected to grown even larger in coming years.