Accessibility links
Looking Back On 50 Years Of Busing In Boston : NPR Ed For 50 years, Boston has been busing kids to force desegregation. Audie Cornish, who was part of the program as a kid, travels back to Boston to check on its effectiveness all these years later. 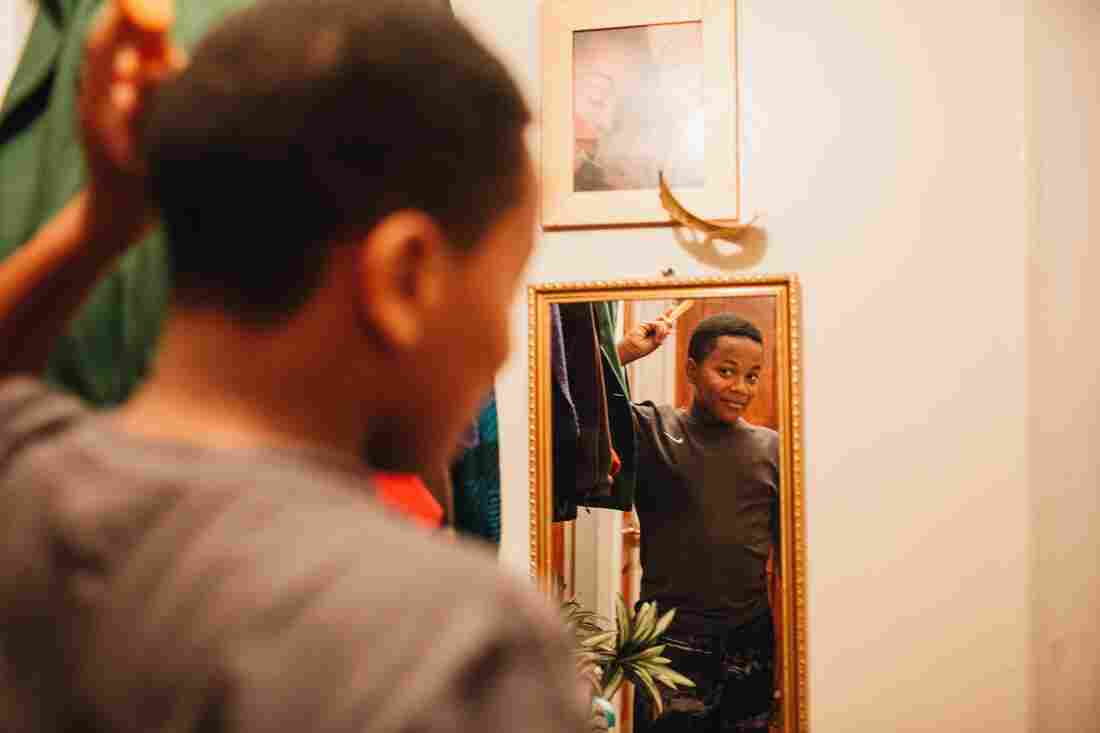 Bryan Bailey combs his hair before heading off to school. Kieran Kesner for NPR hide caption 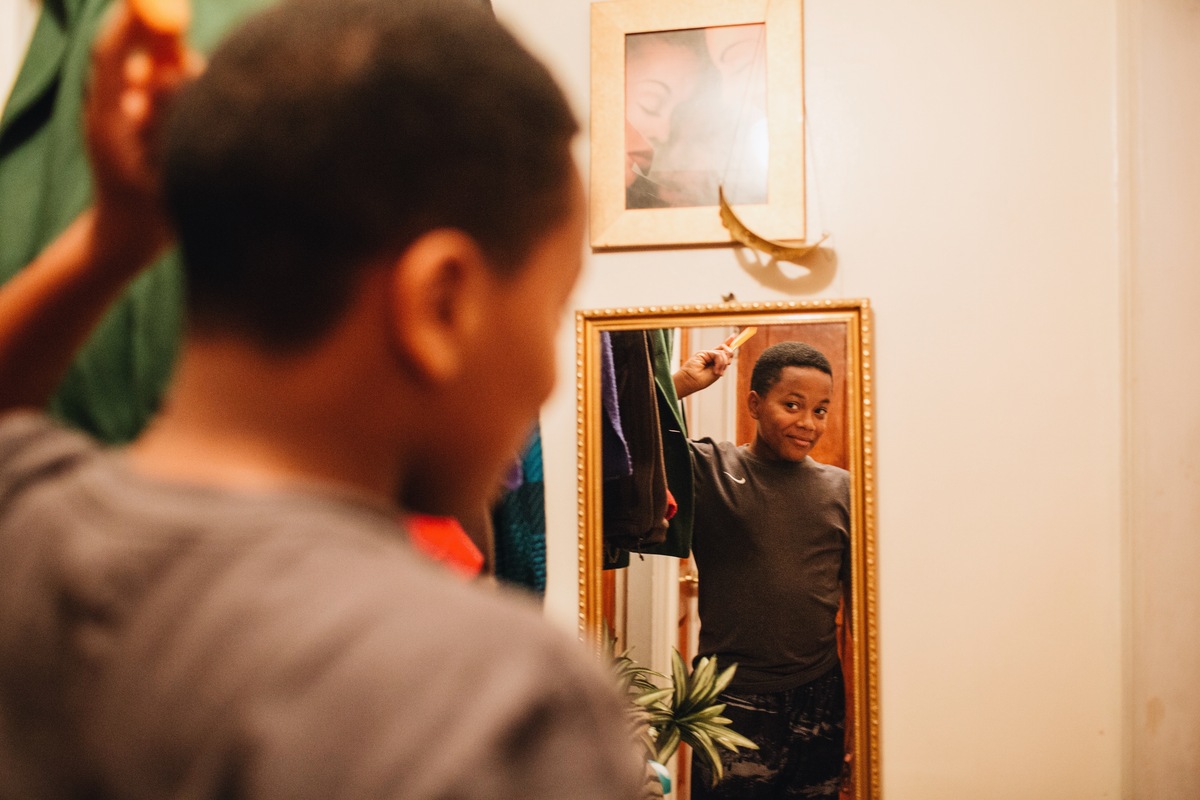 Bryan Bailey combs his hair before heading off to school.

It's been more than 60 years since the Supreme Court's landmark case Brown v. Board of Education ruled racial segregation in public schools unconstitutional — a watershed moment for the modern civil rights movement in America.

Yet 2016 began with one of the nation's top educators — the secretary of education — declaring that the job of desegregating the nation's public schools is far from over:

"There are communities around this country that have schools that are more segregated today than they were 10 years or 20 years ago," John B. King Jr. said in January.

I know this, in part, because I was in a desegregation program as a kid: a school busing program in Boston that is still going today.

When you hear "Boston" and "school busing," you might think of the 1970s: images of white people hurling rocks and racial slurs at school buses packed with black kids, rallying against a court order. That mandated desegregation ruling in 1974 tried to get the city to send black and white kids into each other's neighborhoods within Boston.

But there's another busing story in Boston, one that began years before in 1966, when progressive white school districts in the suburbs started taking in black students from the city. The founders, though, wanted to call it something other than "busing."

"We in the African-American community do not use the word 'busing,' because we feel it is a misnomer," says Jean McGuire. "It is about us — it hasn't anything to do with that school bus; it has to do with the complexion of the students who get on it."

McGuire has run the METCO program — which stands for the Metropolitan Council for Educational Opportunity — for the past 40 years. When she started the program, she was a schoolteacher in the Boston public school system.

Black parents boycotted the schools, held rallies and petitioned the all-white school committee, but still, they weren't getting anywhere.

So what did they do? They paired with an unlikely ally: white affluent suburbanites.

Seven white communities signed up to accept 220 black city kids into their schools, and METCO was born. Early-morning buses started carrying the kids across city lines to school.

I wanted to see how things have changed, so I went back to my old neighborhood in Boston.

Getting out the door 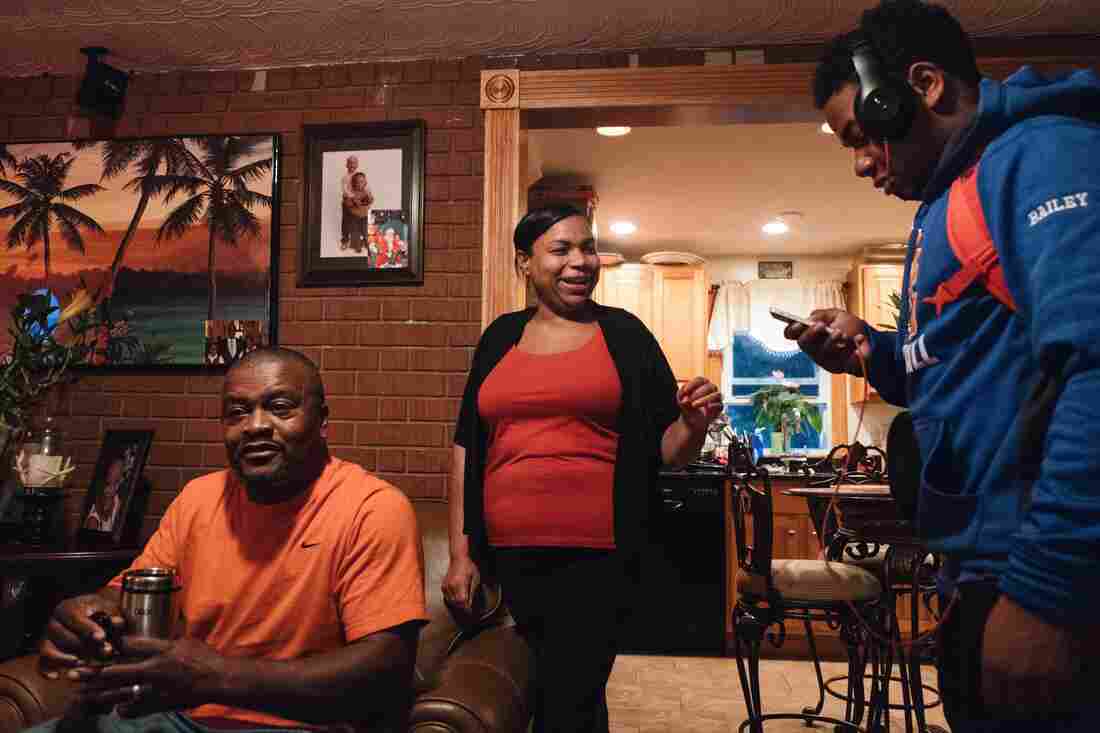 Barnet (from left), Marissa and Brandon Bailey chat before school at their home in Boston. Kieran Kesner for NPR hide caption 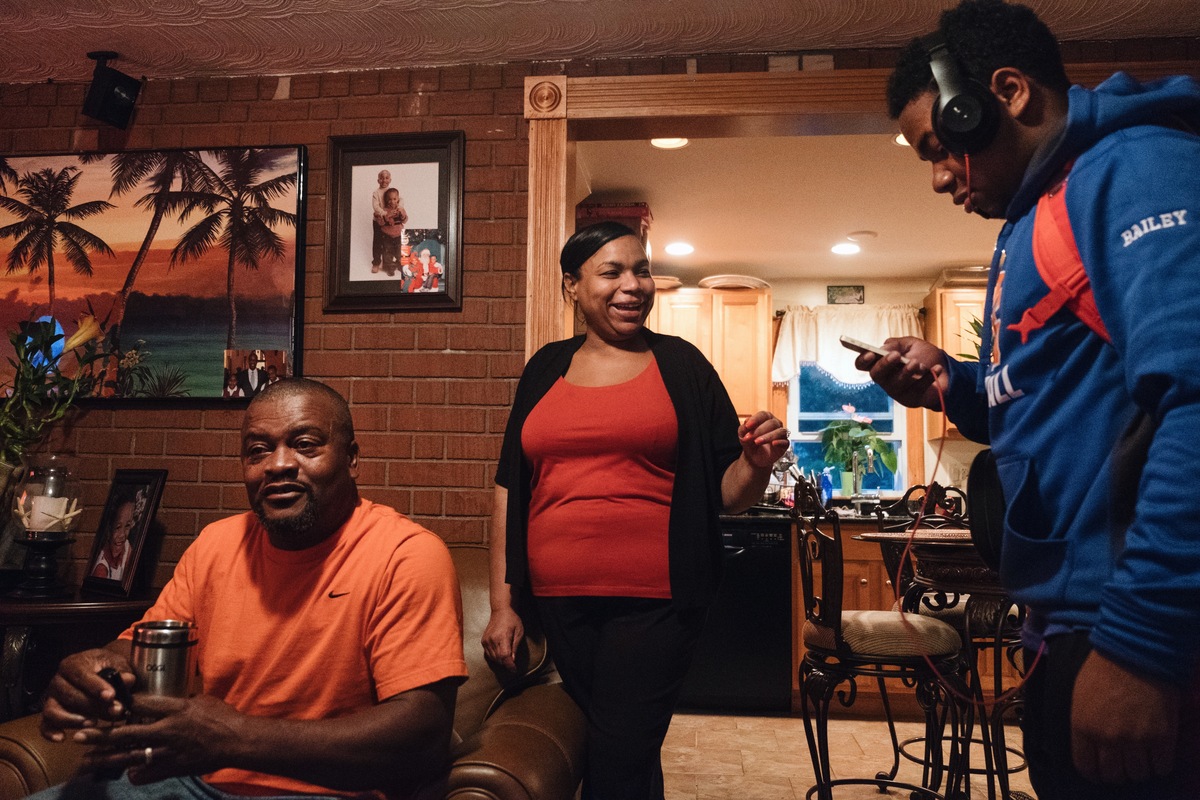 Barnet (from left), Marissa and Brandon Bailey chat before school at their home in Boston.

On school days, Marissa Bailey wakes up before the sun to make breakfast for her two kids, both students in Newton, Mass., a fairly affluent, mostly white suburb just outside Boston. The Baileys live in Mattapan, a neighborhood within the Boston city limits.

Because of the METCO program, Brandon Bailey is a sophomore at Newton South High School and Bryan Bailey is a seventh-grader at Oak Hill Middle School. There are 10,000 families on METCO's waiting list, parents hoping their kids will get a chance to bypass lower-performing city schools.

"I never even think about enrolling my kids in a Boston public school," says Marissa Bailey.

By the second week of Brandon's life, she was trying to register him in the METCO program. "He didn't get into the program until almost 5 years old. I went to Newton, I had an interview, I dressed him up — no sweatshirt, no hoodies," she remembers.

Both kids got in and have been making the commute ever since. Brandon, the high school sophomore, plays football. Bryan runs track, plays the saxophone, sings in a choir.

I remember as a METCO kid not being able to do a lot of that stuff because my parents worked late, and getting back and forth during weeknights was too tough. Explaining that to my wealthier classmates who already assumed all METCO kids were poor was too embarrassing.

Marissa Bailey says at first she worried about that too.

"A lot of the people in the suburbs think that when you live in the city — that black kids have nothing," Bailey says. "They don't think that you own a home."

So she brought parents from Newton to her neighborhood in Mattapan, so they could see where her children — and other METCO students — live. "And you see the reaction when they get onto the street," she said. "I would get comments like, 'Oh this is like the suburbs.' "

It helped her sons make friends, get invited on play dates and basically integrate into their school community.

Barnet Bailey, Marissa's husband and the boys' father, is also an integral part of the family's morning routine. He makes sure the boys get to the buses on time, driving them to their respective bus stops every morning.

By 6:45 a.m. he's ready to take Bryan, the middle-schooler, to the bus. I go with them to follow Bryan through his school day. 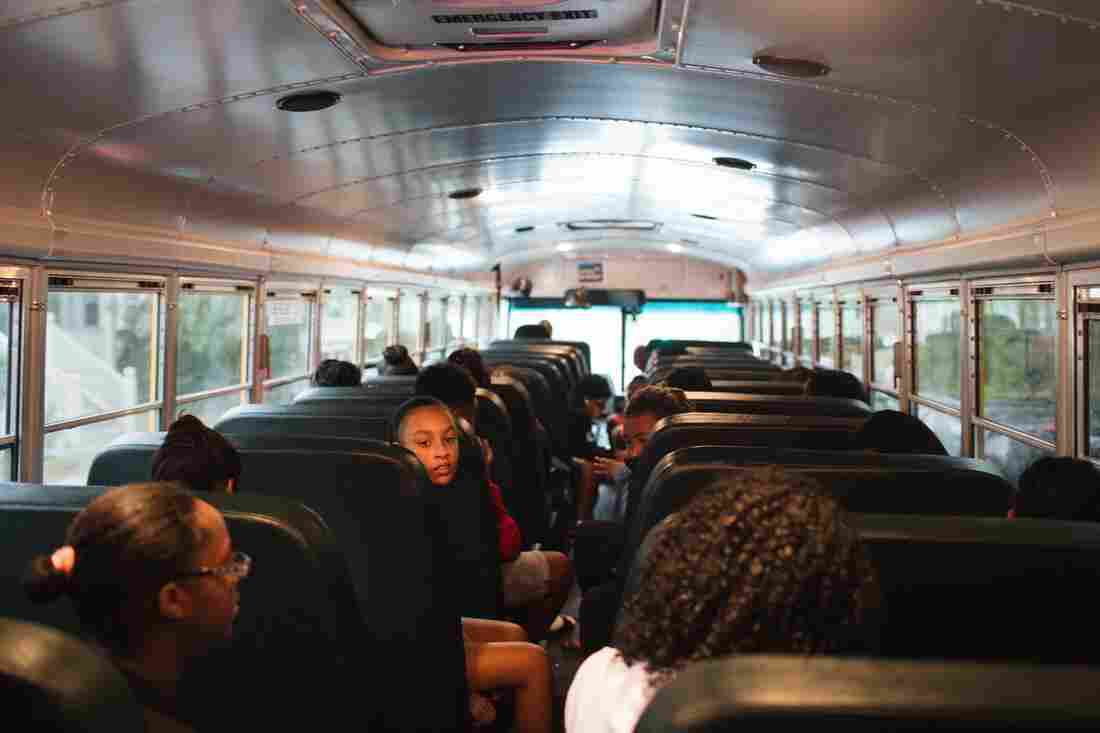 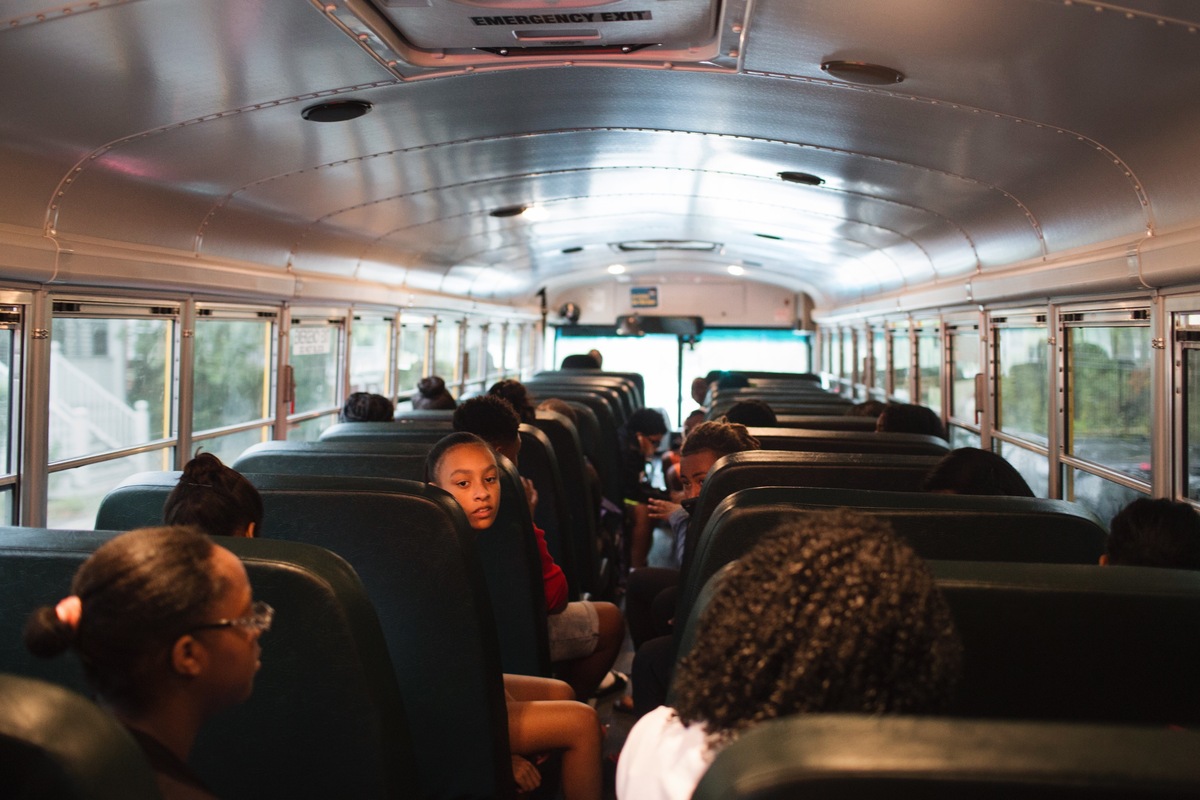 Students on the early-morning METCO bus ride to Newton, Mass.

The school bus is exactly as I remember it: tall evergreen seats that feel like vinyl, seat belt buckles clanging against the floor, kids sitting in factions. The METCO host communities pay for the buses, with added support from the state.

Bryan explained the school bus geopolitics to me. 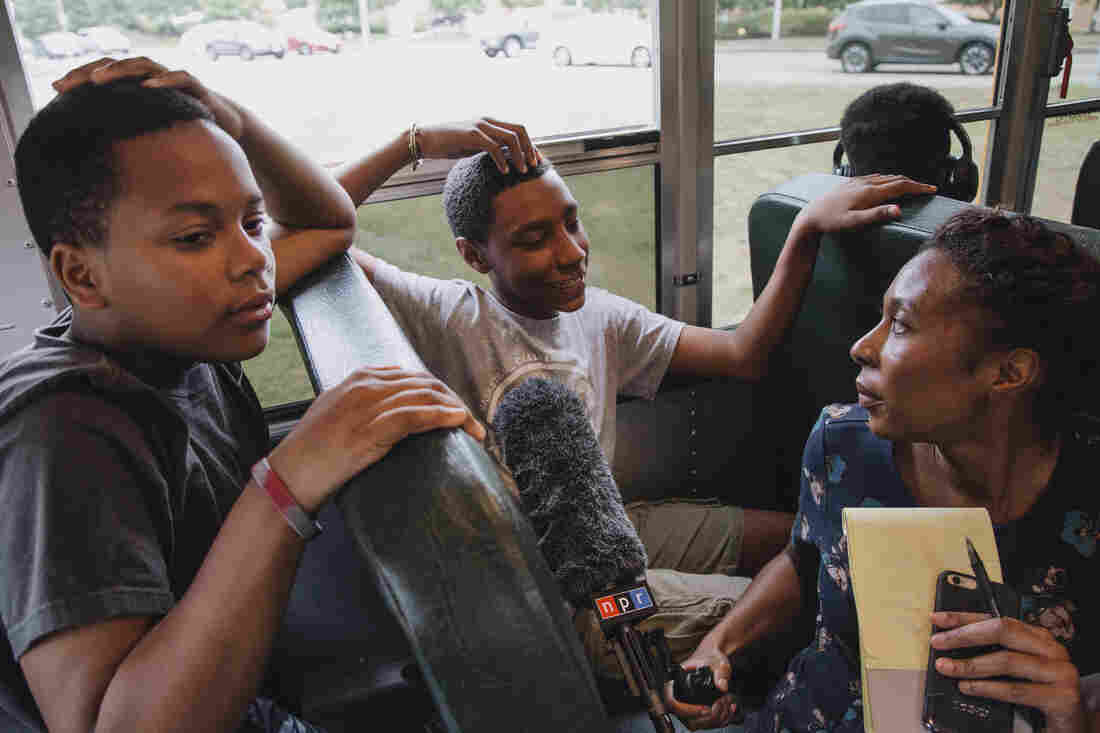 Audie Cornish, who was a part of the METCO program when she was a kid, interviews Bryan Bailey and Robert Figueroa as they ride the bus. Kieran Kesner for NPR hide caption 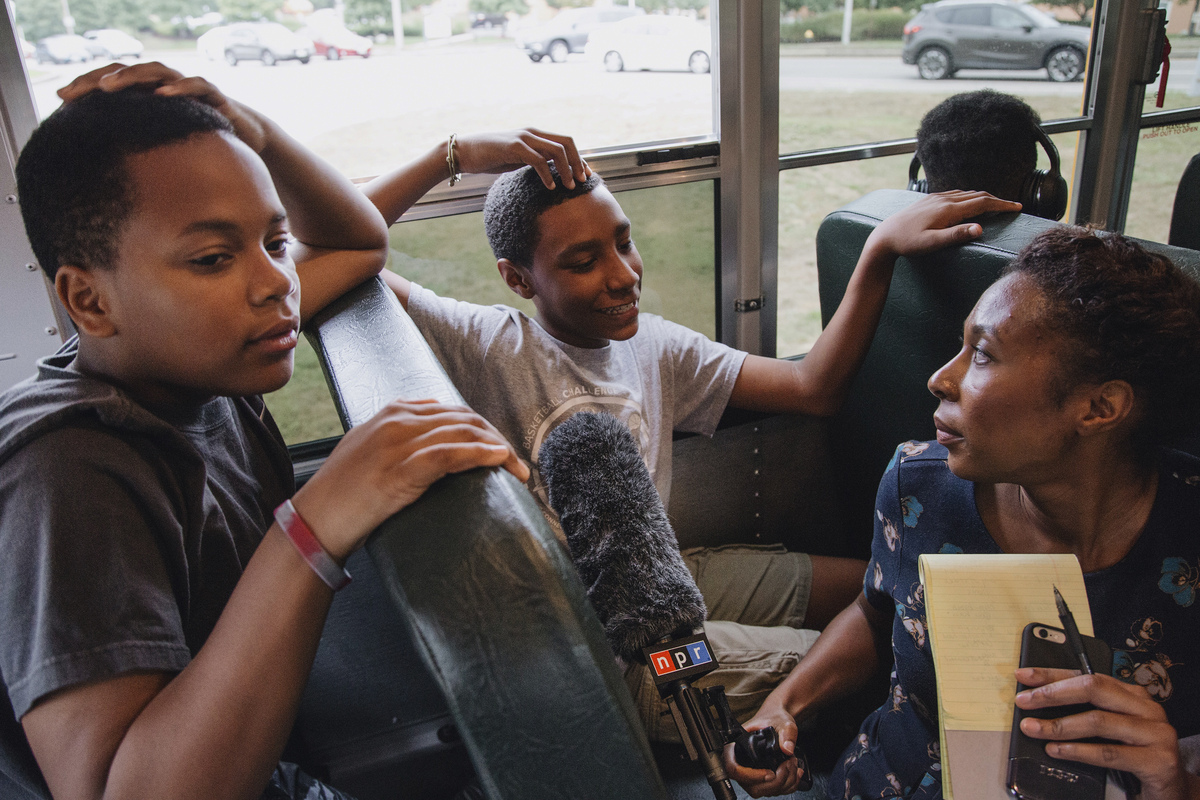 Audie Cornish, who was a part of the METCO program when she was a kid, interviews Bryan Bailey and Robert Figueroa as they ride the bus.

"Like the first week we sit in a seat — and as the weeks go on, that's your seat," he says. "And if somebody sits there, there is most likely going to be a problem."

Between the engine and the screaming, it's loud. The kids say there's no chance of doing any homework.

They arrive at Oak Hill Middle School a little before the local kids, and the rest of the day is like any other school day. Bryan's first class is history, then math.

But here's the thing: Bryan Bailey is often one of two or three students of color in each of these classes. There are just two black teachers in the entire middle school.

That's the case in many of the 30 towns that participate in METCO. Decades after the civil rights movement's desegregation efforts, nearly all are majority white communities. That's why METCO also assigns special counselors to each school.

At Oak Hill, that counselor is Alyssa Arzola. She meets with the METCO kids during lunch a couple of times a week. 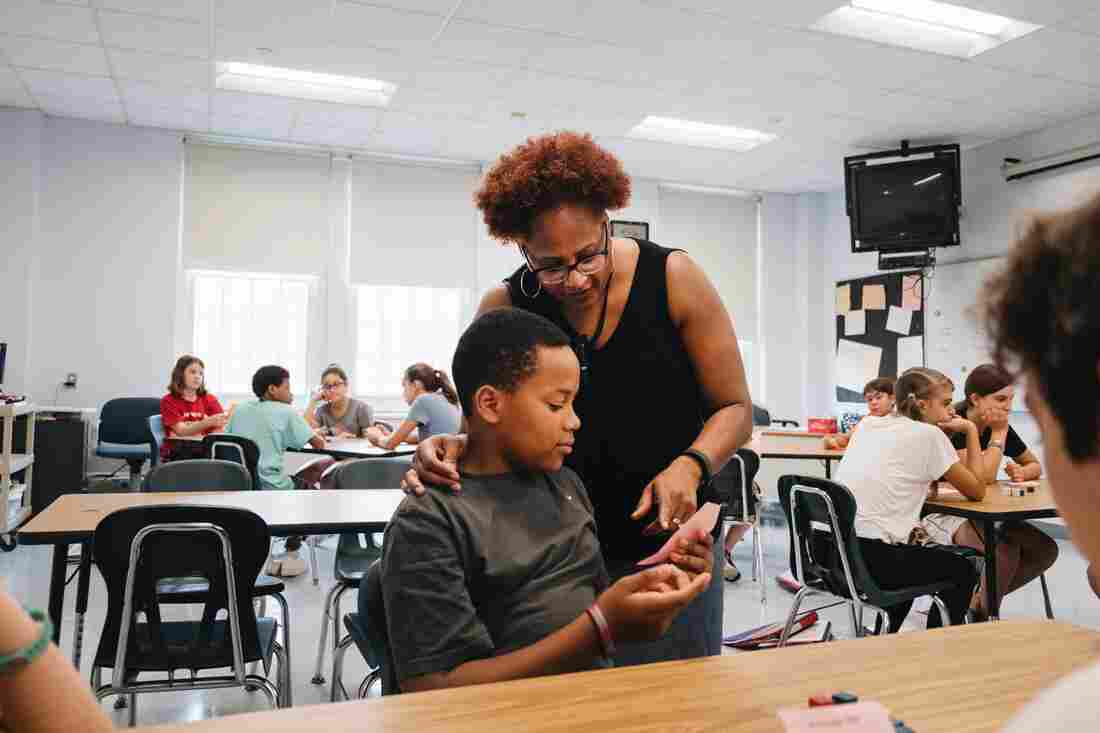 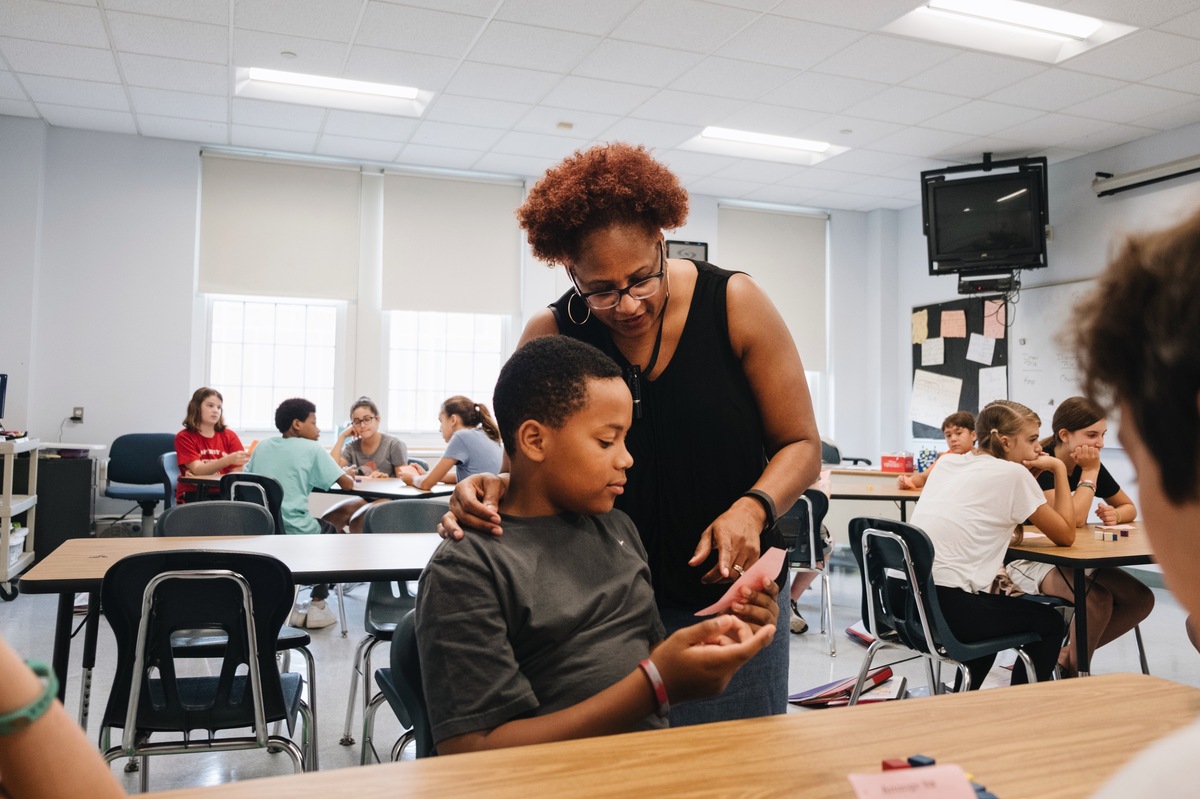 Bryan Bailey in math class with his teacher, Kirsten Turner.

"I talk to them — talk to them about everything," Arzola says. Her office is sunny and covered in inspirational quotes and colored printouts.

Arzola grew up in the METCO program herself. She still lives in Boston.

Do these middle-schoolers ever talk about race directly? Not exactly, she says.

"Let's say they are using terms like ghetto," she explains. "We will unpack that and we will talk about ... using language like that in a group of people who may not know the neighborhood that you are coming from. We talk about how [to] define the word ghetto." 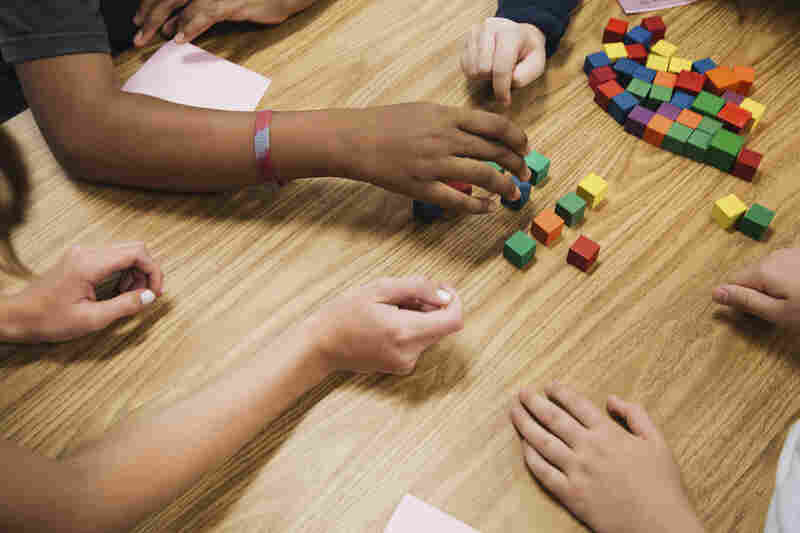 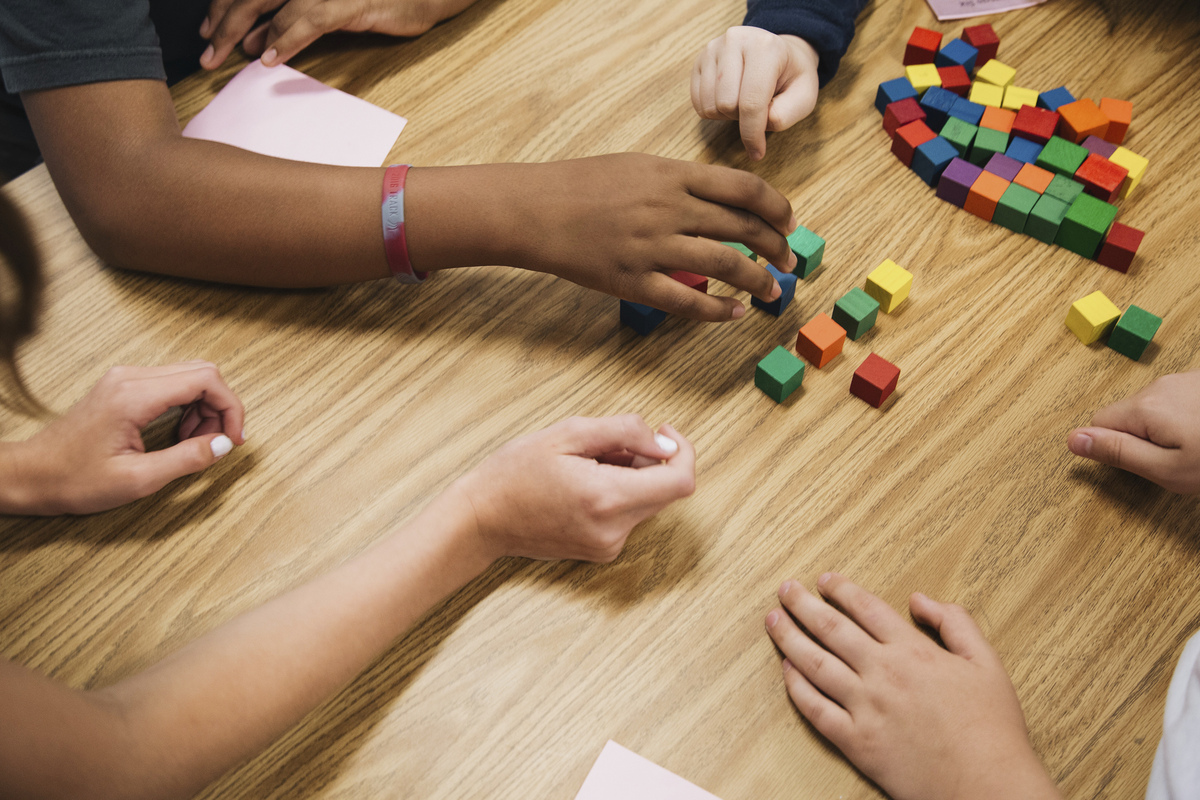 Students work on a group project in math class.

It's conversations like that that eventually lead to a larger discussion about race or class.

On the day I visit, the kids — including Bryan — all pile into her office, lunch in hand, cracking jokes and teasing each other. They talk about the usual adolescent topics: video games, chores, the way their parents make them crazy.

Not all the kids are METCO kids — some actually live in Newton. But they still find themselves drawn to this room with black and Latino kids from the city. This is the one place in their entire school day where they are not the minority, where they don't have to explain who they are.

Back in the city

At the end of the school day, the bus comes back for the kids, ready to return to Boston. But the day is not over for Bryan and the rest of the Bailey family. There's football practice in Newton and a visit to a youth club in Boston. 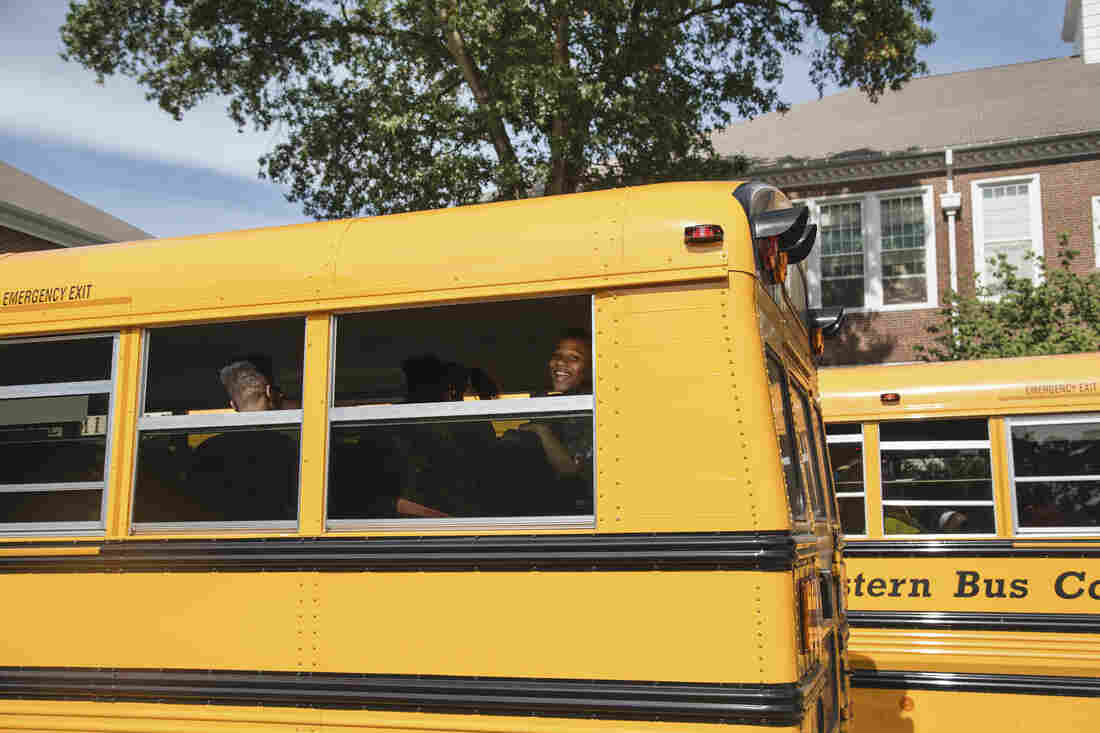 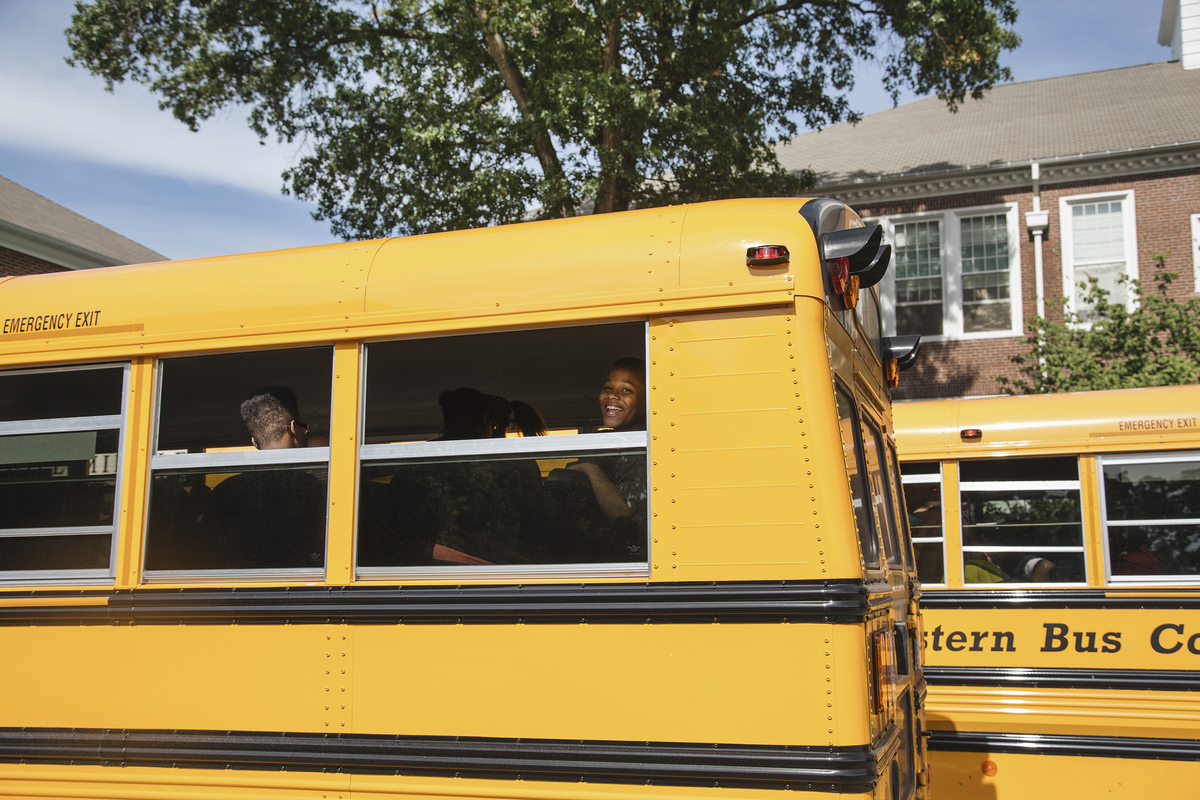 The next time I catch up with them, it's nearly 8 p.m. Bryan is downstairs, squirreled away doing homework. Upstairs, Brandon has math and history books spread out on the floor.

Unlike his younger brother, Brandon sometimes wonders what it would have been like to go to school in the neighborhood. He grew up playing in local football leagues so he still has friends in the city.

"Yeah, my friends tease me all the time, like, 'Oh yeah, you're a white boy, you go to school in Newton,' " he says. At 15, Brandon Bailey is at the age where he senses his place in two different worlds far more acutely.

He says being raised here in the city is different than in suburbs like Newton.

And in the suburbs? "Every man for himself," he says.

While the Bailey kids are doing well academically and on a path to college, they are also shouldering the work of the integration part of this program. METCO is not a swap. White kids do not take the bus into Boston. 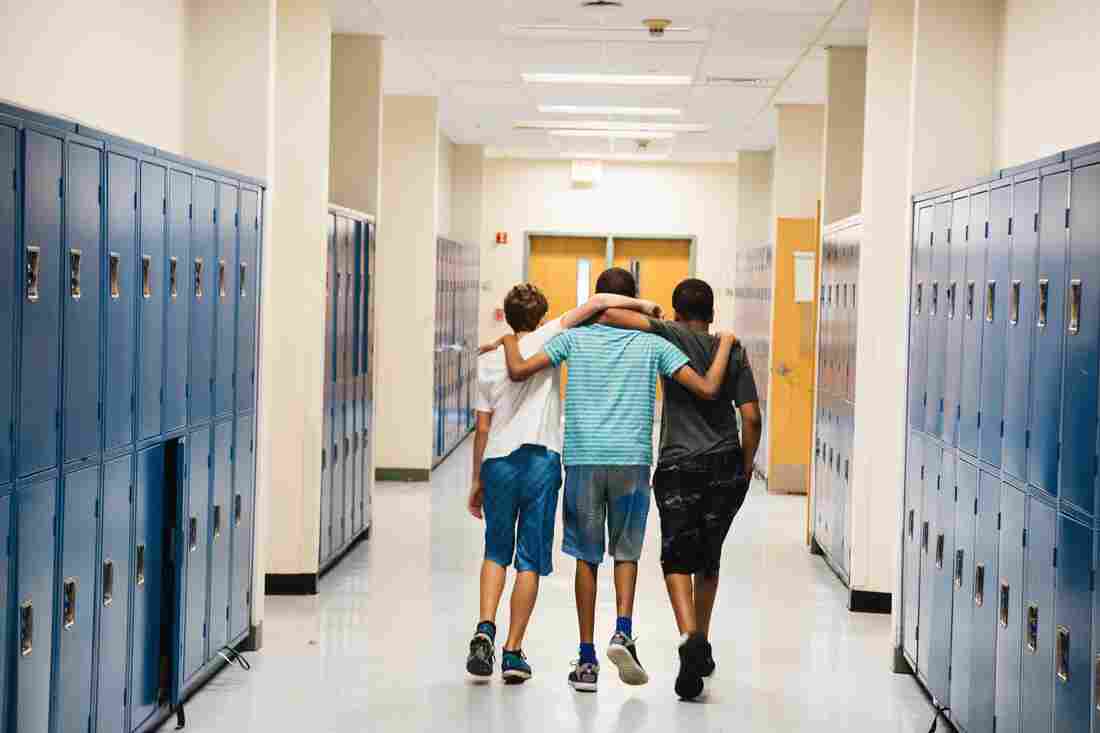 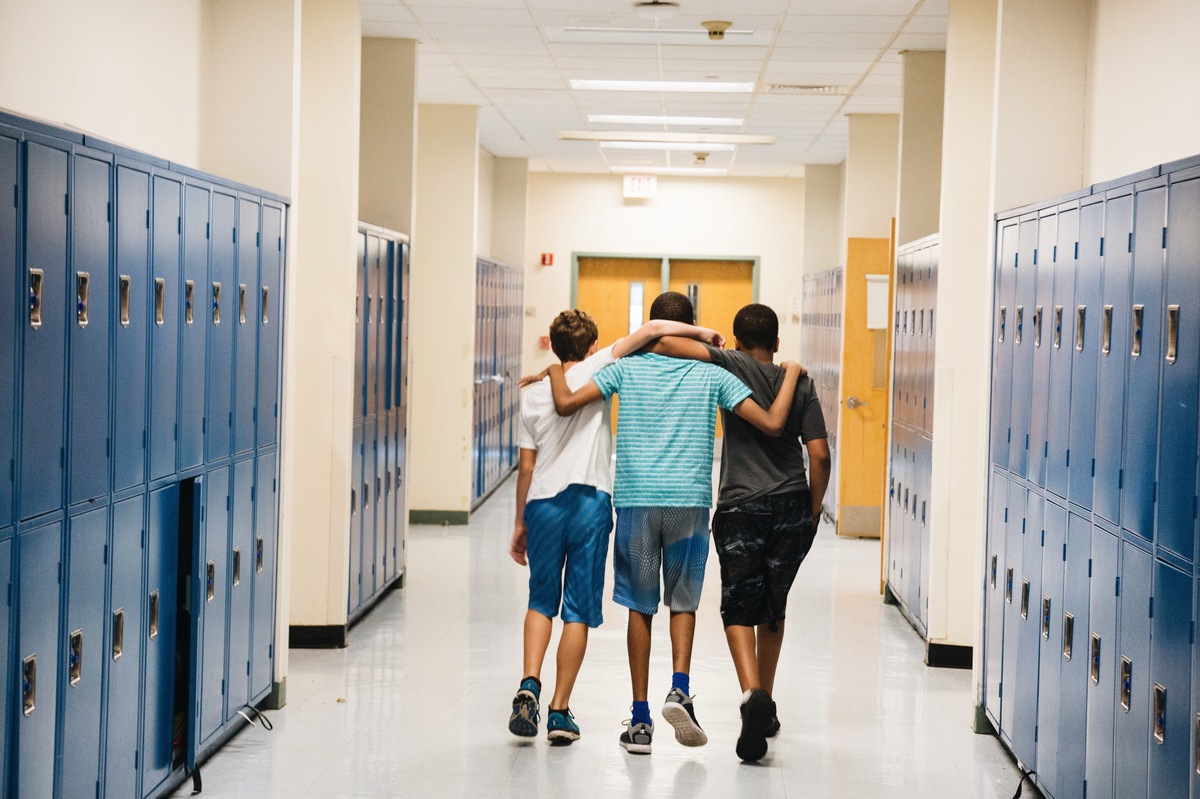 Bryan Bailey (right) and friends walk down the hallway arm in arm.