Accessibility links
Born In The U.S., Raised In China: 'Satellite Babies' Have A Hard Time Coming Home : NPR Ed Some immigrant families from China send their U.S.-born babies to their home country to be raised by relatives. Psychologists are studying what happens when these children return home. 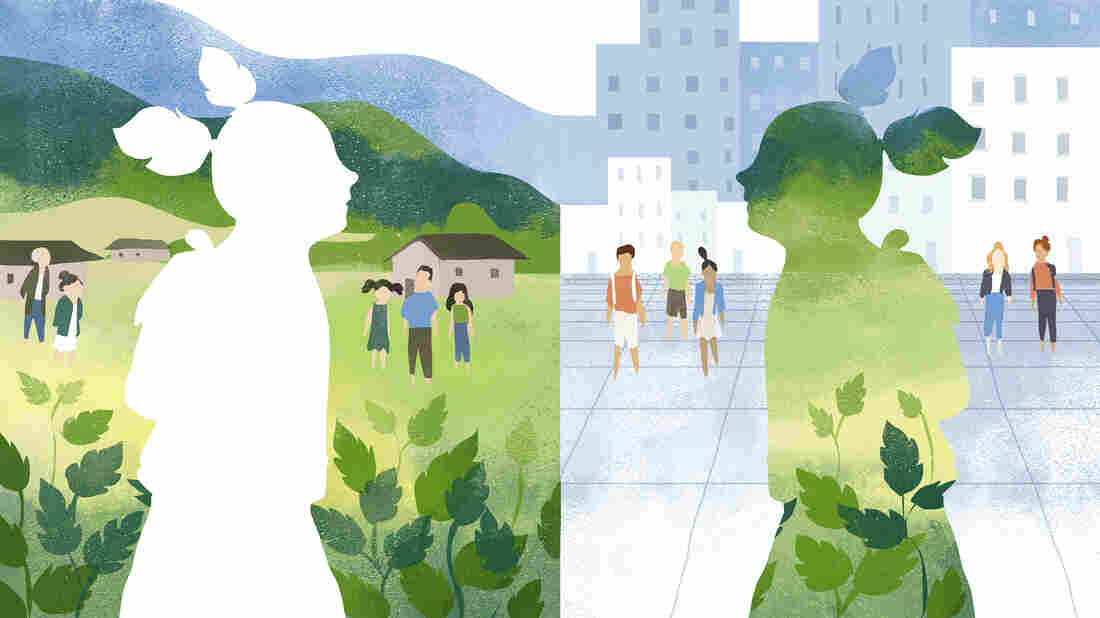 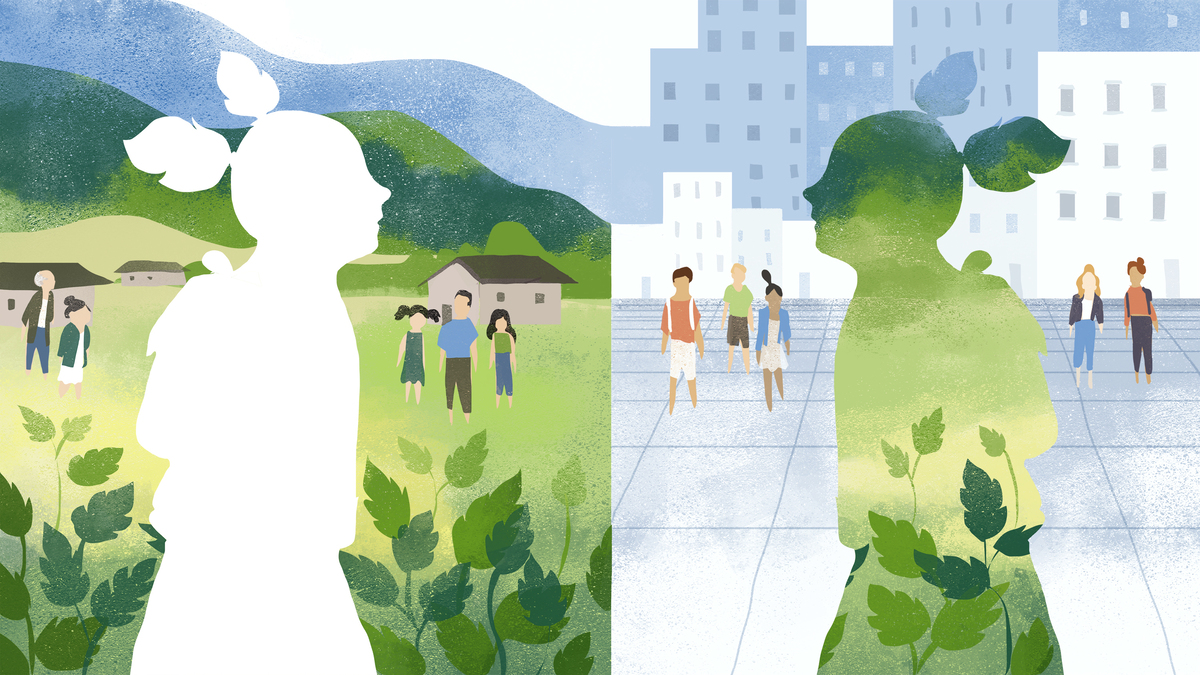 Chun Zheng has lived through a house fire, a flood and an earthquake. None of that, she says, compares to sending her infant daughter and son abroad to live with her extended family.

"It's the worst hardship I've ever had to bear," says the 42-year-old hotel housekeeper, speaking in Mandarin.

Both of her children — 7-year-old Joyce and 5-year-old Jay — were born in Boston. But for the first years of their lives, they stayed with relatives in Fujian, a southeastern province of China. Joyce spent more than four years with her aunt, whom she still calls "ma." (She calls Chun Zheng "mommy.")

Anytime you eat at a Chinese restaurant in Chinatown, it's likely that somebody in that restaurant has a child who is in China at the moment."

At the time, Chun Zheng and her husband were living in a cramped room in Boston's Chinatown, sharing a kitchen and bathroom with strangers. She says they worked long hours at restaurants to save enough money to eventually bring their kids home.

"Anytime you eat at a Chinese restaurant in Chinatown, it's likely that somebody in that restaurant has a child who is in China at the moment," says Cindy Liu, a psychologist at Harvard Medical School. She points out that no one knows exactly how many Chinese immigrant families send their babies to be raised by family in China.

That's partly why she helped start a research project focusing on Chinese immigrants in the Boston area who are raising what some psychologists call "satellite babies." Like satellites in space, these children leave from and return to the same spot.

You can find similar arrangements among immigrant communities from South Asia, Africa and the Caribbean, researchers say. The satellite babies of Chinese immigrants usually come back to the U.S. in time for school.

When Satellite Babies Go To School

For their study, Liu and her colleagues interviewed adults who were once satellite babies to try to track the long-term impacts of the experience. Researchers say there are benefits from spending your early years in another country, away from your birth parents. Many satellite babies are exposed to their immigrant parents' mother tongues and often develop strong ties with their grandparents and other extended relatives.

While Liu says that separation between satellite babies and their biological parents does not necessarily harm their relationship, some teachers and principals in New York City, where researchers also see this phenomenon, say these children can sometimes show subtle signs of trauma.

Listen to the story from WNYC

"They're always looking around to see who's there with them," says Principal Elizabeth Culkin of P.S. 176 in Brooklyn. "And they always need that sense of knowing where they are and who's there to protect them."

Members of Culkin's staff say sometimes these children may act out by pushing or shoving other students to get attention. There are, of course, language difficulties, and some children show signs of attachment disorders.

Brenda Tang, who teaches kindergarten at P.S. 176, has seen satellite babies in her classroom every year. This year, she spotted 5-year-old Vivien Huang on the first day of school. While most of the other students were busy drawing, Vivien only scrawled a couple of shapes. Her mother, Hong Zheng (no relation to Chun Zheng of Boston), says Vivien returned from China in June.

Hong Zheng's story may sound familiar; she says she took Vivien to live with her grandparents in Fujian province when she was a baby. That way she and her husband could continue to put in long hours working at a restaurant. She did the same when her younger daughter was born a couple years later. 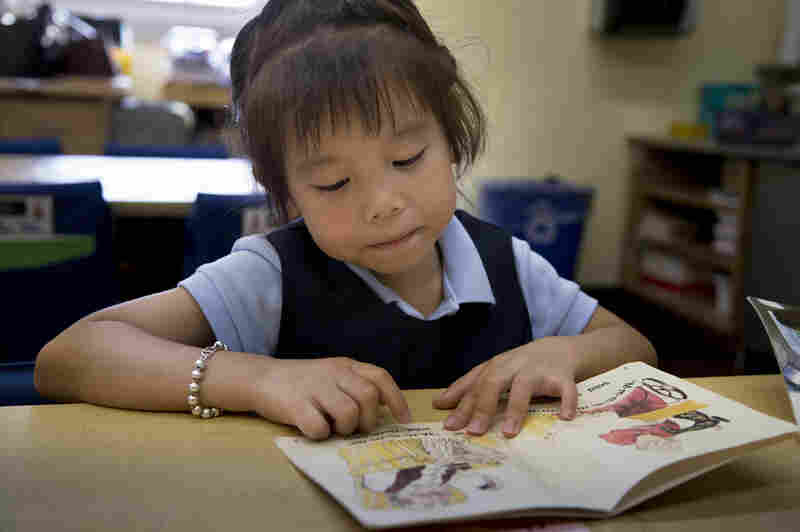 Though Hong Zheng says she cried for a month after Vivien left, they stayed in touch through video chats.

Now, Hong Zheng says she's quit working to care for the girls, and she's planning to bring her parents to New York City from China because Vivien misses them so much.

"Every morning she demands to video chat with her grandfather," she says in Mandarin.

The Role Of Social Services

In Boston, Yoyo Yau, who directs family and community engagement at Boston Chinatown Neighborhood Center, says she's concerned that parents and their children are often not prepared to be reunited in the U.S.

"That separation is so heavy for the parent to bear because they say, 'I'm the parent here. You should love me. I love you. How we can not do it?' But the child just can't," says Yau, who has organized parenting classes and offered counseling for mothers and fathers of satellite babies.

Similar services exist in New York City. In Flushing, Queens — home to one of the city's three booming Chinatowns — Lois Lee is an evangelist for the cause. She runs a child care program for the Chinese-American Planning Council inside a public school. Lee says the satellite babies she knows often experience a complicated mixture of emotions about leaving one family for another.

"They're angry," she says. "'Why did you send me away? How come my brother's here but you sent me away?' And then they're disconnected."

More free day-care programs, she argues, could encourage parents to bring their children back from China at an earlier age or even prevent families from sending children abroad. Lee says New York City's expansion of universal pre-kindergarten in New York City may be one reason why she's noticed anecdotally more children returning at age 4 instead of 5.

Meanwhile, her solution is to engage children in conversations about their experiences.

During a visit to a class of 8- and 9-year-olds, almost every hand shot up when Lee asked how many children were satellite babies — a term she says they all know. Many have vivid memories about the difficult transition, using the words "upset" and "frustrated" to describe how they felt about moving back to New York. We aren't using the children's names to protect their privacy.

One boy says he was angry because, "My parents lied to me that they were going to visit me" in China. Another says he was frustrated because, "I didn't even know my parents exist" until he got off the plane and they greeted him with gummy bears.

One girl recalls, "I was like, 'Grandpa, grandma, why are you leaving now?' And then my grandmother started crying."

Many of the children seem to understand that they were sent abroad because their parents needed more time to focus on their jobs, often in restaurants or nail salons.

"They didn't have enough money to raise us, to raise me in America," one boy adds.

Researchers say they don't think the satellite babies phenomenon is going anywhere in the U.S. as long as affordable child care stays out of reach for many immigrant families.