Accessibility links
E Is For Empathy: Sesame Workshop Takes A Crack At Kindness : NPR Ed A new survey from Sesame Workshop found that parents and teachers worry a lot about kindness — what it looks like, how to cultivate it and why there isn't enough of it in the world. 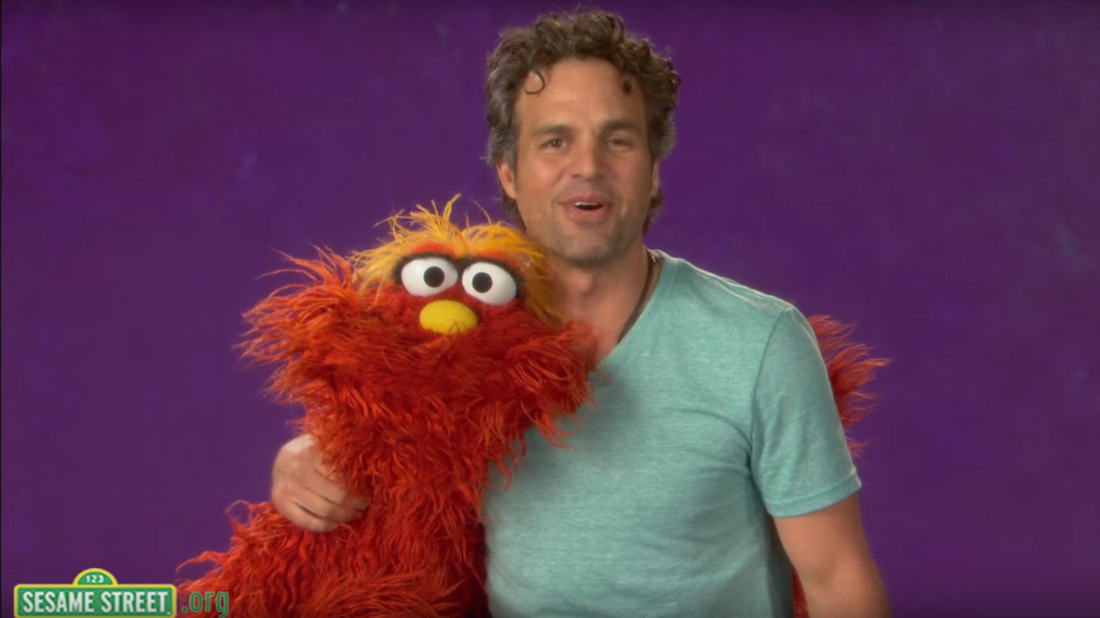 Actor Mark Ruffalo and Murray the Muppet talk about empathy.

Sesame Street via You Tube

Parents and teachers are worried.

They believe that today's kids are growing up in an unkind world and that learning to be kind is even more important than getting good grades. But, when it comes to defining "kind," parents and teachers don't always agree.

That's according to a new survey of some 2,000 parents and 500 teachers from the educational nonprofit behind Sesame Street, Sesame Workshop.

The folks at Sesame Workshop worried that too much of the world doesn't understand empathy — or doesn't try hard enough to feel other people's pain.

"We ... were concerned what the long-term impact of that would be on children and society as children grow older," said Jeffrey D. Dunn, CEO of Sesame Workshop. "This survey confirms our concerns. It is time to have a national conversation about kindness."

Indeed, a whopping 86 percent of teachers (and 70 percent of parents) admitted to worrying often that the world is an unkind place for children.

And they want to do something about it, says Jennifer Kotler Clarke, who is in charge of research and evaluation at Sesame Workshop.

"Both parents and educators overwhelmingly felt that being kind was more important than having high academic achievement," says Kotler Clarke.

But kindness can mean different things to different people, and here's where the results get complicated. And more interesting.

Kotler Clarke says, for the survey, they used several words to represent kindness, including empathy — but also helping, thoughtful and manners. As a result, "parents generally felt that their children were kind, but less-so helpful and thoughtful."

How can a child be kind without being helpful or thoughtful? By being polite. It turns out that manners were very important to parents. When given a choice between having manners and having empathy and asked, "Which of these is more important for your child to be right now?" 58 percent chose manners compared with just 41 percent who chose empathy.

Kotler Clarke suggests that some parents may assume that teaching a child manners is a good way of building empathy. But, she says, "There's really no great evidence around that. In fact, bullies are very good at having manners around adults."

On this point, teachers broke with parents, overwhelmingly preferring empathy (63 percent) over manners (37 percent). And teachers can see the disconnect in their classrooms. Thirty-four percent say, of the children they teach, that all or most of their parents are raising kids to be empathetic and kind, while just 30 percent say all or most parents are raising children with values consistent with their teachers'.

As part of the survey's release, Sesame Workshop linked to a number of outside resources, for parents and teachers looking for practical ways to help cultivate empathy in kids.

Because the vast majority of parents and teachers agreed: It's important to be kind not just to your own family but to everyone else, too.