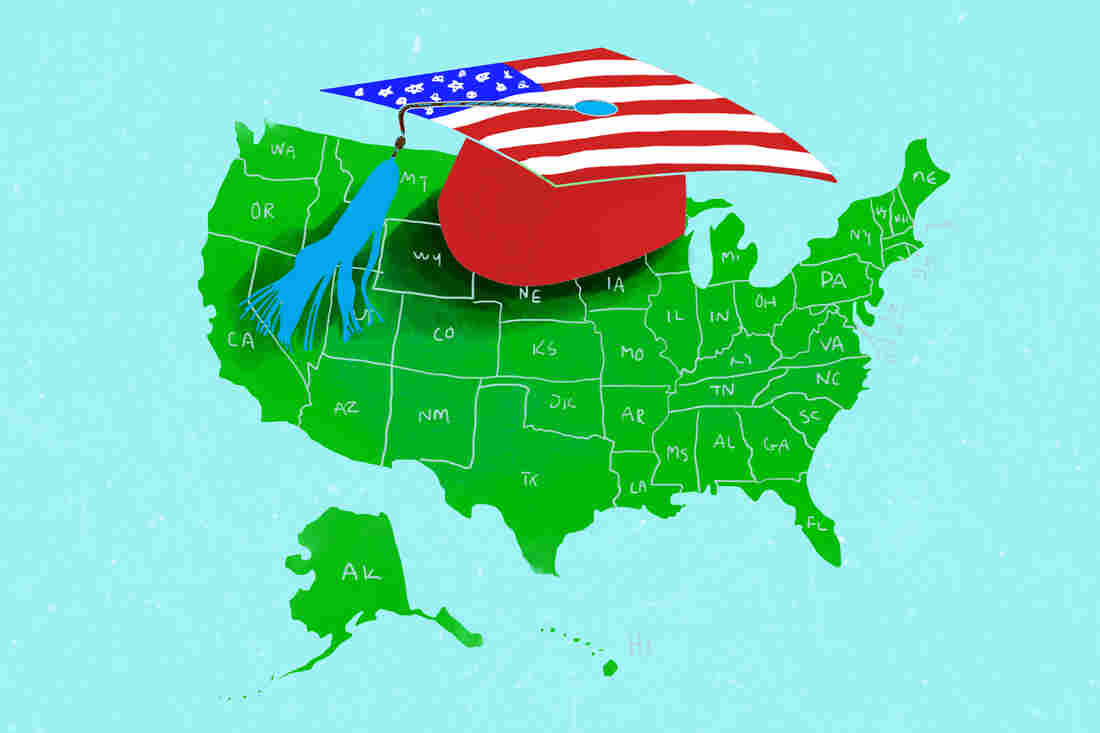 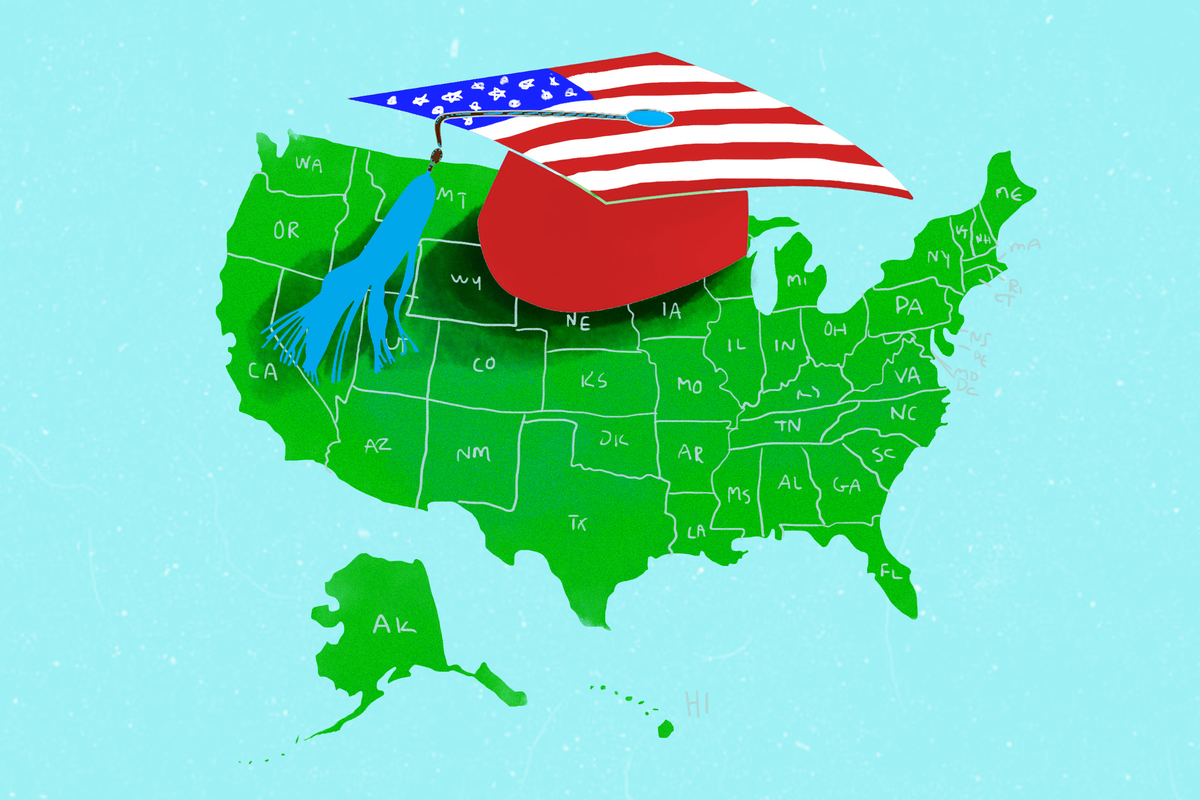 In remarks at Benjamin Banneker Academic High School in Washington, D.C., the president used the good-news announcement as an opportunity to tout his education initiatives, from Preschool for All through the America's College Promise free community college partnership.

"When I took office almost eight years ago, we knew that our education system was falling short," he said. "I said, by 2020 I want us to be No. 1 across the board, so we got to work making real changes to improve the chances for all of our young people ... And the good news is that we've made real progress."

High school graduation rates in the nation's capital, he noted, have grown faster than anywhere else in the country, from 53 percent to 69 percent.

While the graduation rate continues to climb, the improvement comes at a time when the scores of high school students on the test known as the "Nation's Report Card," are essentially flat, and average scores on the ACT and SAT are down.

As we've reported, the rising graduation rate reflects genuine progress, such as closing high schools termed "dropout factories," but also questionable strategies by states and localities to increase their numbers.

"For many students, a high school diploma is not a passport to opportunity, it's a ticket to nowhere," says Michael Cohen, president of Achieve, a national nonprofit that's long advocated for higher standards and graduation requirements.

Cohen points out that roughly half of states now offer multiple diplomas. Some of those credentials are rigorous, some aren't. "You don't know how many students who were in that graduation rate actually completed a rigorous course of study. We're not transparent about that. We're concealing a problem."

In many places, the high school graduation exam is also a low bar, Cohen says, while some states have dropped it altogether.

Just last month, in a major school funding ruling, Connecticut Superior Court Judge Thomas Moukawsher excoriated his state for watered down graduation standards that, he says, have already resulted "in unready children being sent to high school, handed degrees, and left, if they can scrape together the money, to buy basic skills at a community college."

It's difficult to know which states earned this uptick in graduation rates through high standards and hard work and which states achieved it through shortcuts and lowered expectations. In some cases, it's all of the above.

Trends vary widely from state to state. Ohio's graduation rate has been flat, while Georgia's reported rate has risen more than 10 points, from 67 percent to 79 percent since 2010-2011. It jumped more than six points from last spring to this spring.

According to the Atlanta Journal-Constitution, Georgia officials credited the rise to an increased focus on attendance and dropout prevention as well as to the elimination of state exit exams. But school employees in Atlanta have also reported pressure to inflate grades, particularly for students enrolled in online "credit recovery," which allows students to make up failed courses.

See below for more of our reporting on the graduation rate.

From 'Dropout Crisis' To Record High, Dissecting The Graduation Rate 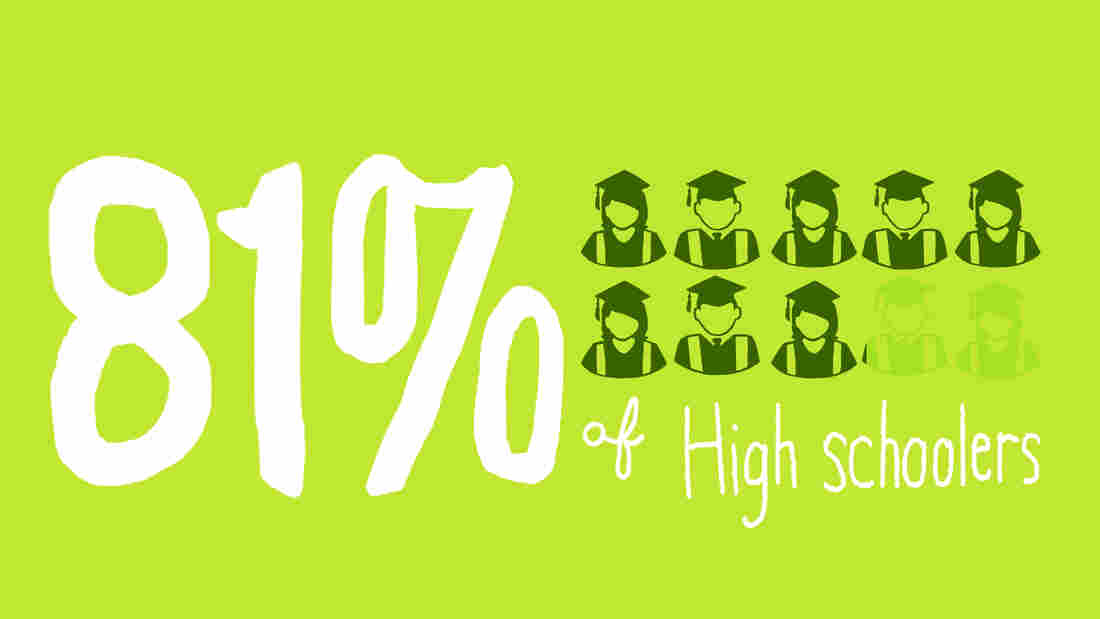 The U.S. high school graduation rate was 81 percent in 2013, the most recent year in which federal data are available. LA Johnson/NPR hide caption 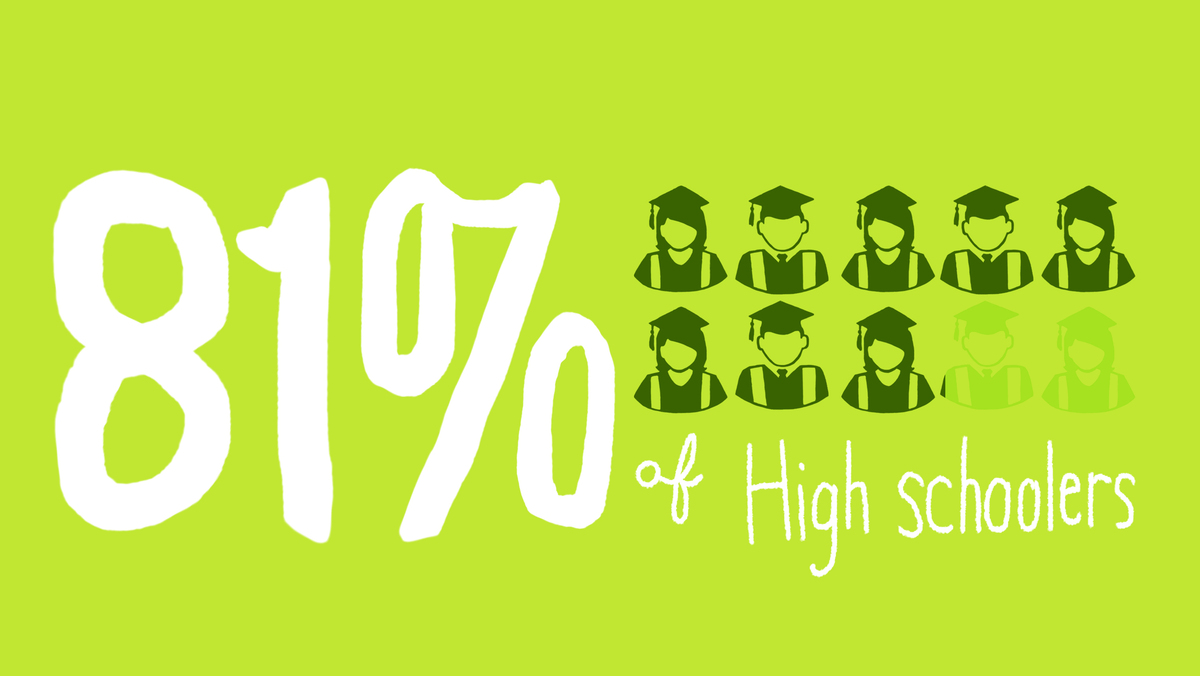 The U.S. high school graduation rate was 81 percent in 2013, the most recent year in which federal data are available.

In his State of the Union address in January, President Obama had some sure-fire applause lines: "More of our kids are graduating than ever before" and "Our high school graduation rate has hit an all-time high."

Which raised some interesting questions: "Is that really true?" and "Why?" and "How do we know?" and "So what?"

A seed was planted that grew into our project this week examining that number. Our reporting shows many of the individual stories behind a single statistic: 81 percent, the current U.S. graduation rate.

But in the course of pulling this project together, our team fell into a rabbit hole over something that doesn't often get attention: the origin of the statistic itself. It turns out to be a fascinating story, and not just for data wonks. It's a story of collaboration across the political aisle, heroic efforts and millions of dollars spent by state governments, and dogged researchers uncovering new insights that arguably changed the lives of tens of thousands of young people.

Many individuals worked hard, and worked together, to make the nation do a better job counting high school graduates. The effort had complex — sometimes contradictory — results.

The ABCs And No Child Left Behind

When we say 81 percent is an all-time high, let's put that in context for a moment.

For most of American history, high school was a rare achievement — one, by the way, that qualified you for a white-collar job.

Estimates vary depending on the method used, but generally speaking, the graduation rate didn't exceed 50 percent of the population until 1940. It peaked at the end of the 1960s, but continued to undulate, hitting the doldrums between 1995 and 1999. Historically, racial and ethnic minorities trailed behind.

While not quite a historic low, the "dropout crisis" was getting plenty of attention in 2002. That was the year of the No Child Left Behind Act, when the federal government got involved. The law required states to make measurable progress on high school graduation rates or face sanctions such as a loss of funds for poor students.

And it wasn't just a matter of legislation. New research was influencing the public discussion, creating a sense of urgency around high school completion.

Elaine Allensworth at the University of Chicago published work identifying what was later called the early warning ABCs: Attendance, Behavior and Course Performance, which reliably predict graduation by freshman year.

Robert Balfanz and Nettie Legters of Johns Hopkins University singled out the nation's "dropout factories." At almost 1,000 high schools nationwide, they said, your chance of graduating was no more than 50-50.

On the economics front, "We knew that 63 percent of jobs in the next decade would require some postsecondary education," says Sunny Deye, who works on education policy for the National Conference of State Legislatures. "There was an understanding that the way we were preparing kids for the 21st century economy needed to change. We had to shift the paradigm from allowing some kids to drop out to recognizing that a high school diploma was now the bar."

So the game was on. States had a legislative imperative to raise graduation rates; they knew where to target intervention (early on, and at failing schools); and they knew they would feel it economically if they didn't.

But there was a problem. The early 2000s were a dark time for state education statistics. States could report high school graduation rates any old way they pleased, and many did. Just to take one example, at the end of the 20th century, "North Carolina was reporting a four-year high school graduation rate in the high 90s," says Daria Hall at the nonprofit policy center The Education Trust. They accomplished that, she says, by comparing the number of graduates who earned their diploma in four years, to the total of graduates, including those who took five or six years to graduate. Did you catch that? Their tally included no dropouts at all!

Meanwhile, think tanks and federal agencies had competing information. The Census Bureau asks people about their level of education, for example.

But what was missing was a single, clear, comparable and accurate measure of graduation rates.

Then something unusual happened in the world of public policy: action.

Did you fall asleep in the middle of that sentence?

Well, let's hear from a member of the task force: Legters, co-author of the "dropout factories" research:

"It was a very heady time," she recalls. "We felt that we were getting a lot done. It was a real turning point. There were so many different organizations coming together at the table, asking, how we could have gotten this so wrong in the past? And, what could we do to remedy it?"

"This was a bipartisan issue, with something for everyone," echoes Deye, another member of the task force. "The dropout problem disproportionately affects communities of color and low-income communities. It was becoming a workforce issue; we were hearing from employers and the military. It was a state budget issue for social services and criminal justice systems."

So, the task force included representatives of the American Federation of Teachers and the Business Roundtable, officials from the administrations of governors including Republicans Jeb Bush of Florida and Mike Huckabee of Arkansas and Democrat Ed Rendell of Pennsylvania, along with many of the top-level researchers on the issue.

The mission, says Hall, also a member of the task force, was simple: "Let's get together and figure it out. What is it going to take to get the data where we need it to be?" (The project was underwritten by the Gates Foundation, which also funds coverage at NPR including of education.)

The task force recommended that states immediately adopt a single measurement called the Adjusted Cohort Graduation Rate — ACGR, as it's affectionately known. And the gears of state legislatures and education agencies started moving to put the ACGR into practice.

You've come this far. I know you want to get into the weeds with us. So let's break down the Adjusted Cohort Graduation Rate, shall we?

"Cohort" means you follow a single group of students through a single high school, from ninth grade through graduation. So this number captures everyone who drops out between freshman year and senior year.

That, by the way, wasn't easy in the age of paper records and attendance rolls kept in metal filing cabinets. It was only in the 2000s that most states acquired the technology to track individual students. The federal Race to the Top initiative in 2009 provided states with incentives to put tracking systems into place.

(There are other potential complications: GEDs, fifth-year graduates, special education and alternative diplomas. But we'll get to those later).

Moving over to the ACGR method, and putting tracking systems in place, was going to be hard work, the task force knew.

"States have spent millions on this," says Russell Rumberger, a dropout expert at the University of California, Santa Barbara. "It's a pretty major undertaking. We took years to get our system going in California."

At least now states had their marching orders. Crunch the numbers, 'fess up and start making the picture better.

As we've been exploring all this week, states have taken a variety of paths, sometimes all at the same time. But what a lot of them come down to is a balance between raising academic standards and broadening access.

Recall that the 81 percent graduation rate, while a recent high, has shifted dramatically. Despite all the action that's been taken recently toward this goal, we have to keep in mind the possibility that broader social forces are playing a larger role than policy initiatives in influencing the percentage who graduate.

A major report released earlier this spring argued that the U.S. is on track to achieve a 90 percent graduation rate by 2020. But it will take decades to know whether the students graduating from high school today will reap the same kind of lifetime benefits that their predecessors did from those diplomas.

Graduation rates make for good headlines and applause lines, but they can't capture that kind of nuance.