Accessibility links
How To Teach A Sea Lion Who's Fussy About Grammar : NPR Ed At the New England Aquarium, seals don't just cruise around the tank; they go to school each day. And their teacher has an individual lesson plan for each one of them. 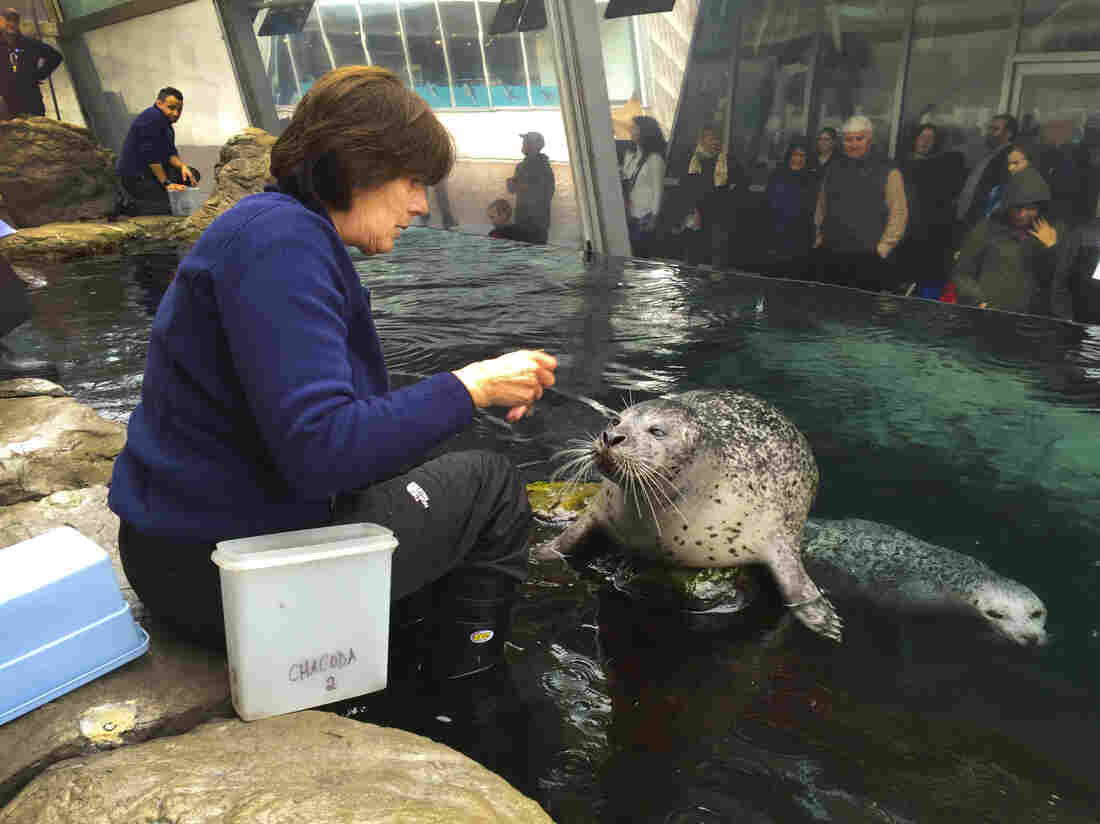 Chacoda, an Atlantic harbor seal at the New England Aquarium, is so good at vocalizing that he can mimic his teacher, Kathy Streeter, when she says, "How are you?" Gabrielle Emanuel/NPR hide caption 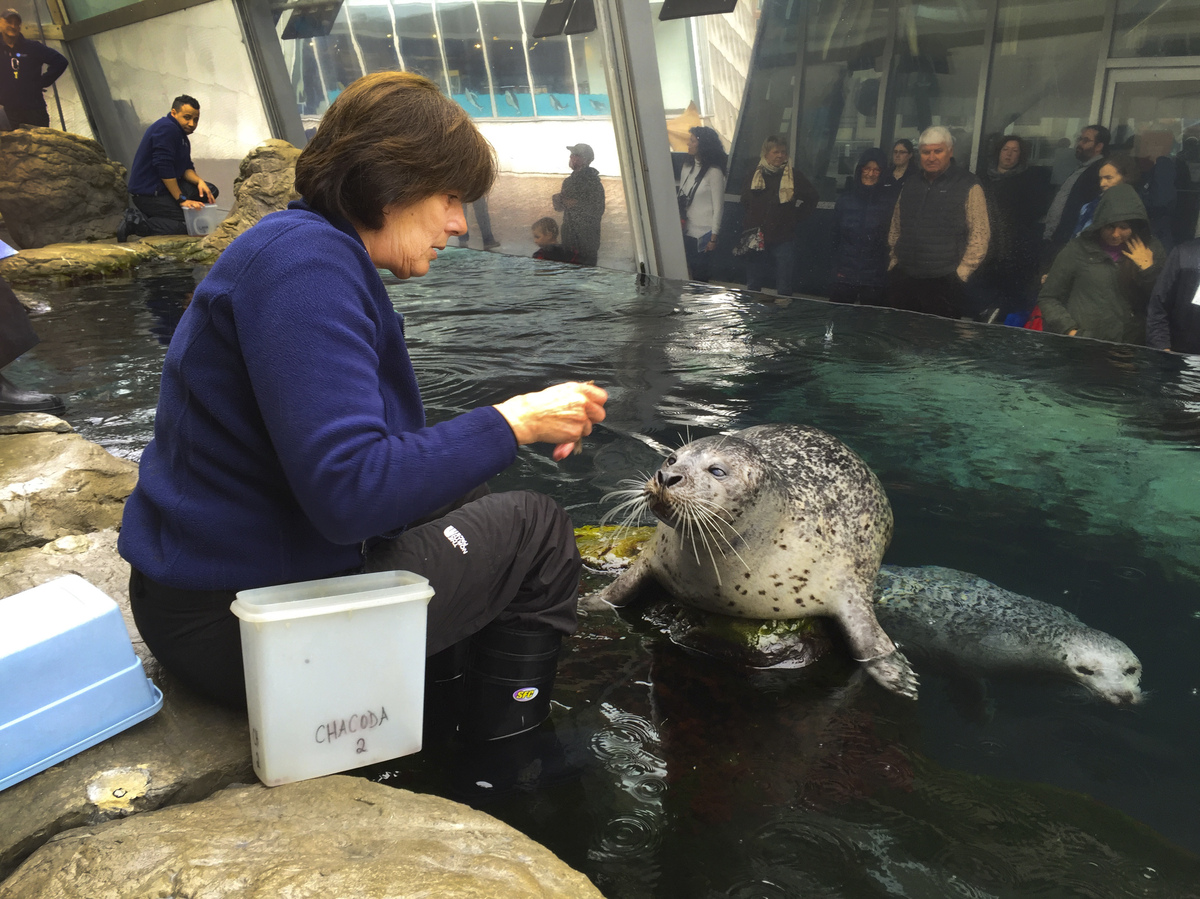 Chacoda, an Atlantic harbor seal at the New England Aquarium, is so good at vocalizing that he can mimic his teacher, Kathy Streeter, when she says, "How are you?"

When it comes to sentence structure, Rocky, a sea lion, was a stickler.

"It really mattered to her, what's going to be the direct and indirect object," says Kathy Streeter, an animal trainer.

For Sierra, it isn't the grammar that interests her. It's the vocalizations. This California sea lion loves experimenting with her vocal range, and she hates being interrupted.

More than 1 million people visit the New England Aquarium in Boston each year. Before walking through the front door, they watch Atlantic harbor seals play. Inside, visitors watch sea lions cruise around the open-air pool.

At This Summer Camp, Some Of The Best Friends Are Marine Mammals

What these visitors may not know is that the aquarium's 10 seals and two sea lions go to school each day; Streeter is one of their teachers.

Rushing between classes, Streeter can rattle off the disposition of each student.

With such different personalities, what's the classroom dynamic like?

"They get along really, really well."

But Streeter rarely works with the whole student body. Instead, most of her lessons are taught one-on-one.

Or, to put it in language that would sound familiar to just about any K-12 teacher, she has an individualized learning plan for each of her students.

With rubber boots and waterproof pants, Streeter starts her lesson with Chucky — short for Chacoda — by asking slowly and clearly, "How are you?"

In a rush of excitement, the harbor seal answers in a garbled voice, "How are you. How are you!"

Much to the delight of the tourists watching, Chucky dives underwater and starts blowing.

While this is not a normal classroom, Streeter's goals would be familiar to any teacher. She says she's "teaching concepts, not just teaching a pattern of response."

She can ask a sea lion to "go to the large white cube and take it to the small black football" and the sea lion will do it.

They can sort objects from the largest to the smallest surface area — and they can do it within a quarter of an inch.

If Streeter gives two sea lions a big object and asks them to move it to the other room, they'll collaborate — sometimes for more than half an hour. "They can problem-solve, and they will stick with it."

Can Pigeons Spell? New Study Suggests They Can Recognize Words

Most people with Streeter's job use the traditional approach, which is a "completely, totally food-based" system of rewards.

But Streeter had a different idea. "I really want us to be able to interact with the animals without food."

So, over the past 40 years, she developed her own approach. Streeter started her work with marine mammals in Florida and spent time in California, where she met Rocky the sea lion at a marine cognition lab.

Streeter's approach worked so well that she's now in charge of the marine mammal team at the New England Aquarium. Her co-workers quietly refer to her as a "Seal Whisperer." 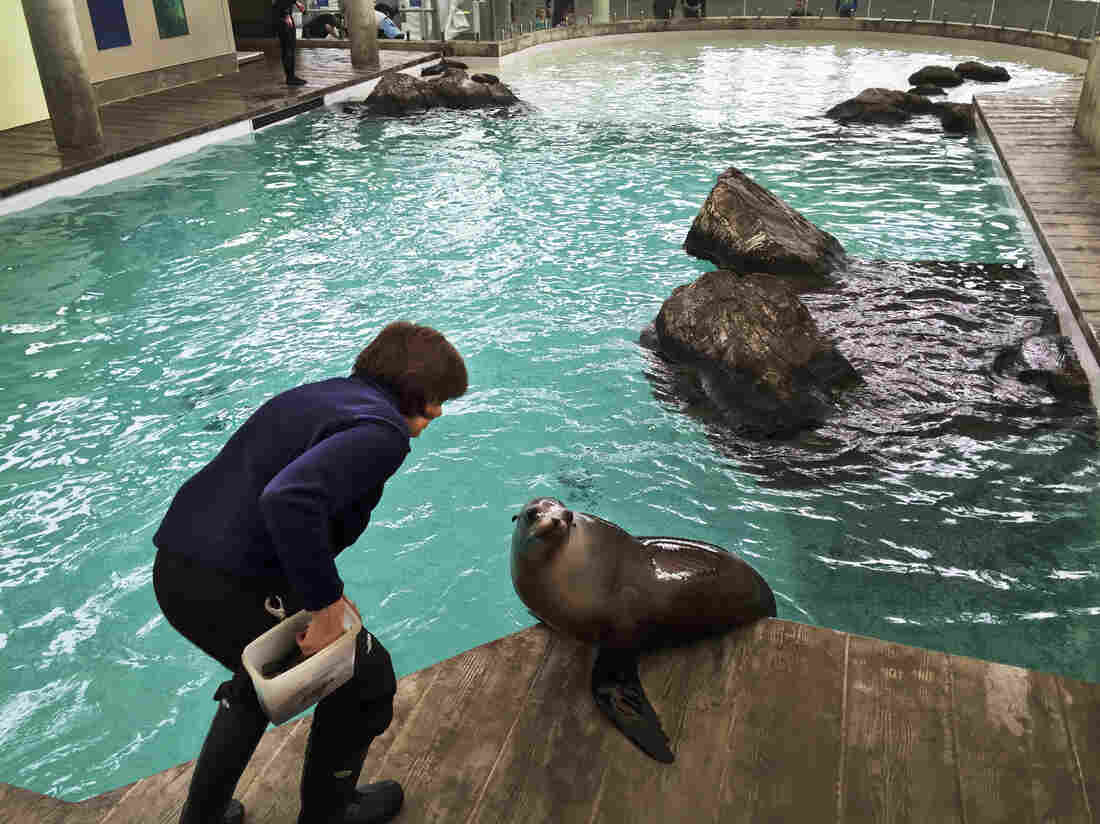 Kathy Streeter has been working with marine mammals since 1973. Gabrielle Emanuel/NPR hide caption 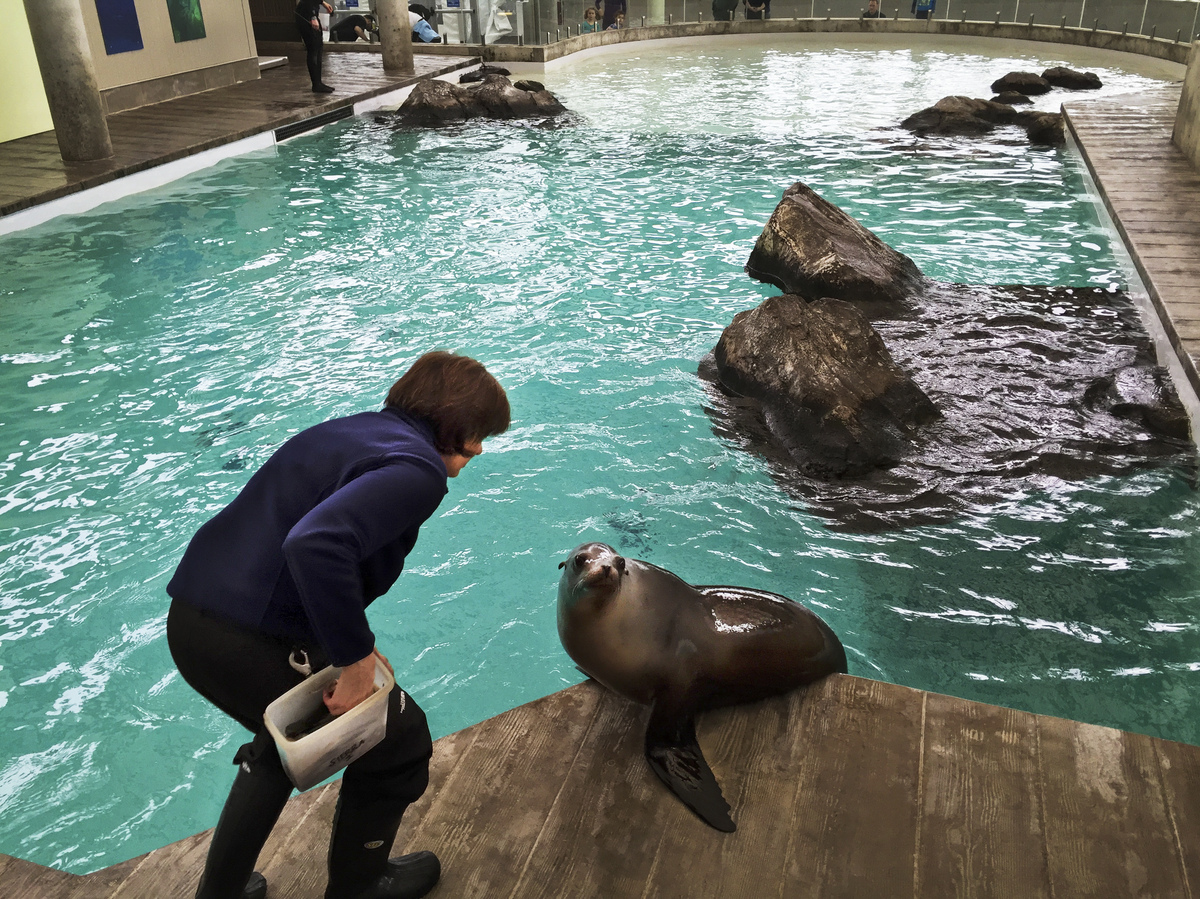 Kathy Streeter has been working with marine mammals since 1973.

Takeaways From The Tank

Watching Streeter closely, you begin to see how she practices her craft.

First, every animal has something that would be totally familiar in a human school: an individualized education program.

In most schools, IEPs are reserved for students with learning differences. Streeter finds the individualized approach is helpful for all her students.

"The training and the socialization and the kind of play that we do is all very individually configured," she says.

Cayenne works best when she's allowed to come and go during the lesson. And Zoe needs to be able to take a break whenever she wants.

"Sometimes they'll offer something so cool, it's like, 'Why don't we do that instead?' " says Streeter.

She realized that Kitovi, a northern fur seal, loved a little cat toy — a ribbon on a stick. Watching Kitovi throw it around and go after it, Streeter got the idea to raise it higher. Soon, Kitovi was jumping for it. Now, with a quick "let's go" from Streeter, Kitovi will leap into the air.

"I feel like they're teaching me as much as I'm teaching them," Streeter says. Each lesson offers her the chance to peek into the heads of marine mammals: learning how they communicate, what problems they can solve and how they socialize.

Peering into the New England Aquarium's seal tank, what visitors might see as an elegant flip may actually be the inspiration for Streeter's next lesson plan.