Accessibility links
Donald Trump Supports School Vouchers. Here's What They Are, How They Work — And If They Work : NPR Ed President-elect Donald Trump said on the campaign trail that school choice is "the new civil rights issue of our time." Here's what he plans to do about it. 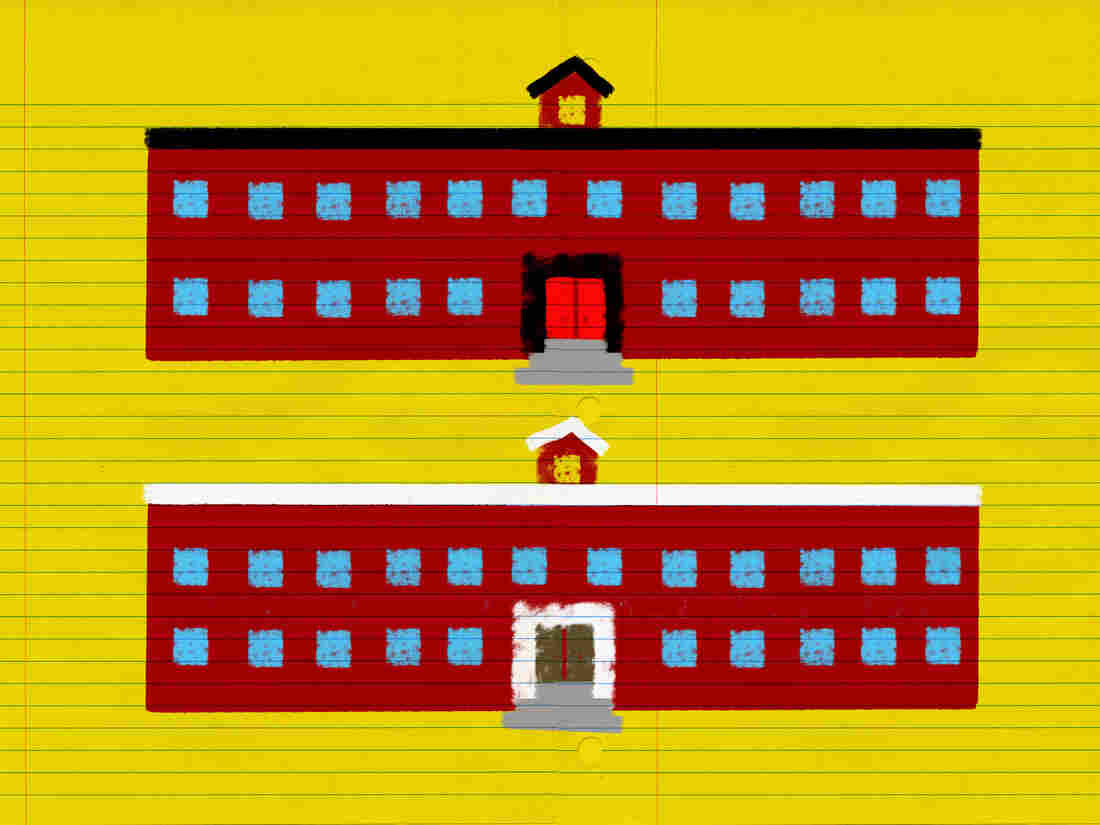 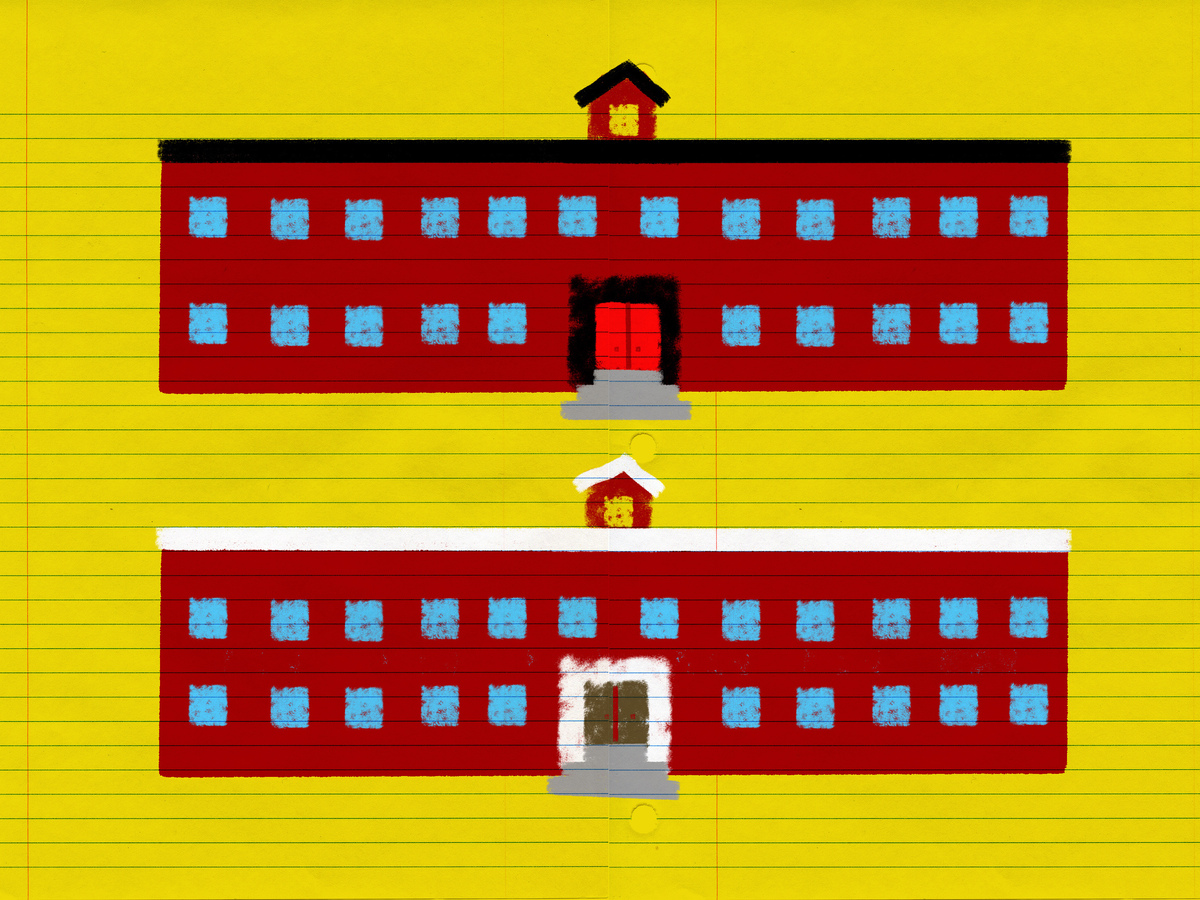 President-elect Donald Trump said on the campaign trail that school choice is "the new civil rights issue of our time." But to many Americans, talk of school choice isn't liberating; it's just plain confusing.

Politicians love to use this buzzword in perpetual second reference, assuming vouchers are like Superman: Everyone knows where they came from and what they can do. They're wrong. And, as Trump has tapped an outspoken champion of vouchers, Betsy DeVos, to be his next education secretary, it's time for a quick origin story.

Think of traditional vouchers as coupons, backed by state dollars, that parents can use to send their kids to the school of their choice, even private, religiously affiliated schools. The money is all or some of what the state would have otherwise spent to educate the child in a public school.

Often called scholarships, vouchers are most often reserved for low-income students, children with disabilities or for families zoned to a failing public school.

The idea has been making headlines since the early 1990s, when several hundred students first took part in the Milwaukee Parental Choice Program.

What about separation of church and state?

Ah, the old First Amendment. The U.S. Supreme Court upheld the constitutionality of vouchers in 2002, but many state constitutions still have what are called Blaine Amendments, which prohibit spending public dollars on religious schools. That's one reason the majority of states still don't offer traditional vouchers.

What does the research say?

"Most studies find modestly positive or neutral impact on student scores, and that's generally limited to African-American students in large urban centers," says Micah Ann Wixom, a policy analyst with the Education Commission of the States.

This 2007 Rand review of research found, as Wixom says, slight gains among students of color, but that the research "has a number of weaknesses that preclude comprehensive and definitive answers."

Can A President Trump Get Rid Of Common Core?

"Do voucher students perform better than they would have in their neighborhood school?" asks Josh Cunningham, a senior education policy specialist with the National Conference of State Legislatures. "At the most I can say, 'Maybe, a little bit.' But there's not a lot of evidence that they'll have any substantial academic gains."

Or, as the Center on Education Policy underscored in its 2011 survey of voucher research: "Achievement gains for voucher students are similar to those of their public school peers."

It's also possible, Cunningham and Wixom note, that vouchers can work in the opposite direction. Both point to recent research on programs in Louisiana and Ohio that found vouchers may have a negative impact on student achievement.

What is Trump's plan?

In a nutshell: Trump has pitched repurposing $20 billion in federal education dollars, distributing them to states as block grants. States can then pass the money on, as vouchers, to the nation's 11 million students who live in poverty.

Trump has said he wants parents to be able to use these vouchers at the school of their choice, even if that school is private and/or religiously affiliated.

What are the obstacles to Trump's plan?

We already mentioned the fact that many state constitutions still have Blaine Amendments. That's Obstacle No. 1. It's not prohibitive, but a problem.

No. 2: It's possible that many of those repurposed federal dollars would come from Title I, a long-standing federal program meant to send additional money to school districts that serve at-risk students. The problem there is, just a year ago Congress finally rewrote the big education law that sets the ground rules for Title I. It's hard to imagine the White House tapping this money without Congress cracking open the law and reworking the rules. And it's not clear there's enough appetite in Congress to do that.

No. 3: In Trump's speech unveiling his ambitious choice plan, the then-candidate said this about its price tag:

"If the states collectively contribute another $110 billion of their own education budgets toward school choice, on top of the $20 billion in federal dollars, that could provide $12,000 in school choice funds to every K-12 student who today lives in poverty."

Translation: Even if the Trump administration can scrape together $20 billion to pay for its voucher plan, that wouldn't begin to cover the full cost. Trump's plan would require states to kick in far more of their own money. And that will be tough, considering that as of 2014 35 states were still spending less overall per student than they were in 2008. The Great Recession put many state education budgets in a vise grip that has yet to loosen.

No. 4: Finally, and perhaps most important of all: Vouchers are not universally popular, even among conservative voters. They may make a certain amount of sense in a large school district or a city where there are enough students — and established private schools — to support multiple choices. But schools in many small towns are closing or consolidating. They don't have enough students to support choice. For lots of rural parents, vouchers are more abstraction than alternative.

Before the election, candidate Trump called school choice the new civil rights issue of our time, and his signature education proposal is a $20 billion school voucher plan. Again, traditional vouchers let parents use public money to pay for private schools, including religious schools. Now, for more on this, I'm joined by another member of the NPR Ed team, Cory Turner. Welcome to the studio.

CORNISH: So Cory, we just heard a lot from Eric about charter schools in Michigan but less about vouchers in part because Michigan doesn't allow for them. But vouchers are central to Trump's plan. So who has them, and how do they work?

TURNER: Yeah, so they're in about 14 states plus Washington, D.C. - traditional voucher programs. Wisconsin really pioneered the idea in 1990, starting in Milwaukee. We've seen them in lots of other states - Florida, Ohio, Indiana. I think the most important thing to keep in mind is that generally these vouchers are limited to students in certain categories - first and foremost low-income students, sometimes students who are zoned to a failing public school and also students with disabilities.

There's one interesting exception in Indiana, which also has one of the largest statewide voucher programs in the country. It's got about 34,000 students. Indiana has slowly been broadening access to its program beyond low-income kids to include some middle-class students. Although I should say that the higher their parents' income, the less money they get from the state.

CORNISH: Now, I mentioned that quote from Donald Trump calling school choice the new civil rights issue of our time. Help us understand that terminology.

TURNER: Yeah, so vouchers really took off as a big city movement, a conservative idea that crossed political lines because many African-American and Latino families who were really frustrated with their failing neighborhood schools - they liked the idea. That said, traditional civil rights allies like teachers' unions don't like them. They say they drain money from the public school system and that often vouchers don't really cover the full cost of private school tuition, which means that it's really not choice for a lot of low-income kids.

The research on vouchers is really hotly debated. There's one 2007 overview of voucher research that found some positive results for African-American students. But there are also a lot of important caveats in that research. A more recent review from 2011 found voucher students doing roughly the same as public school kids, really no better. And some of the newest research frankly - we heard a little bit of it in Eric's piece there - out of Louisiana and Ohio both found some negative academic effects for voucher students.

CORNISH: So what might be some of the obstacles to a national school voucher program?

TURNER: There are actually several big ones, Audie. First in 2002, the U.S. Supreme Court ruled that vouchers are constitutional, but a majority of states still have what are called Blaine Amendments which prohibit them from using state money to fund religious schools.

There are a few other obstacles. The price tag on Donald Trump's plan is roughly $20 billion. It is not clear where that money would come from. Also, it seems like to get this done, they would have to crack open the very big federal education law that Congress passed last year and took a long time to come to agreement on. And I'm not sure that Congress is in the mood to do that.

But maybe most important of all really is that vouchers are not universally popular even among conservative voters. They may make a certain amount of sense in a large school district or a city where there are enough students to support multiple choices. But if you think about it, in a lot of small towns - we've seen this on the Ed desk. In much of rural America, schools are closing or consolidating. There just aren't enough students to support choice. And for parents who live in these places, vouchers just seem like an abstract concept.

CORNISH: That's Cory Turner of the NPR Ed team. Thanks so much.