Accessibility links
'Schools Can Save Lives': An Exit Interview With The U.S. Education Secretary : NPR Ed John B. King Jr. talks about equity, testing and vouchers as he prepares for a Trump administration handover.

'Schools Can Save Lives': An Exit Interview With The U.S. Education Secretary

'Schools Can Save Lives': An Exit Interview With The U.S. Education Secretary 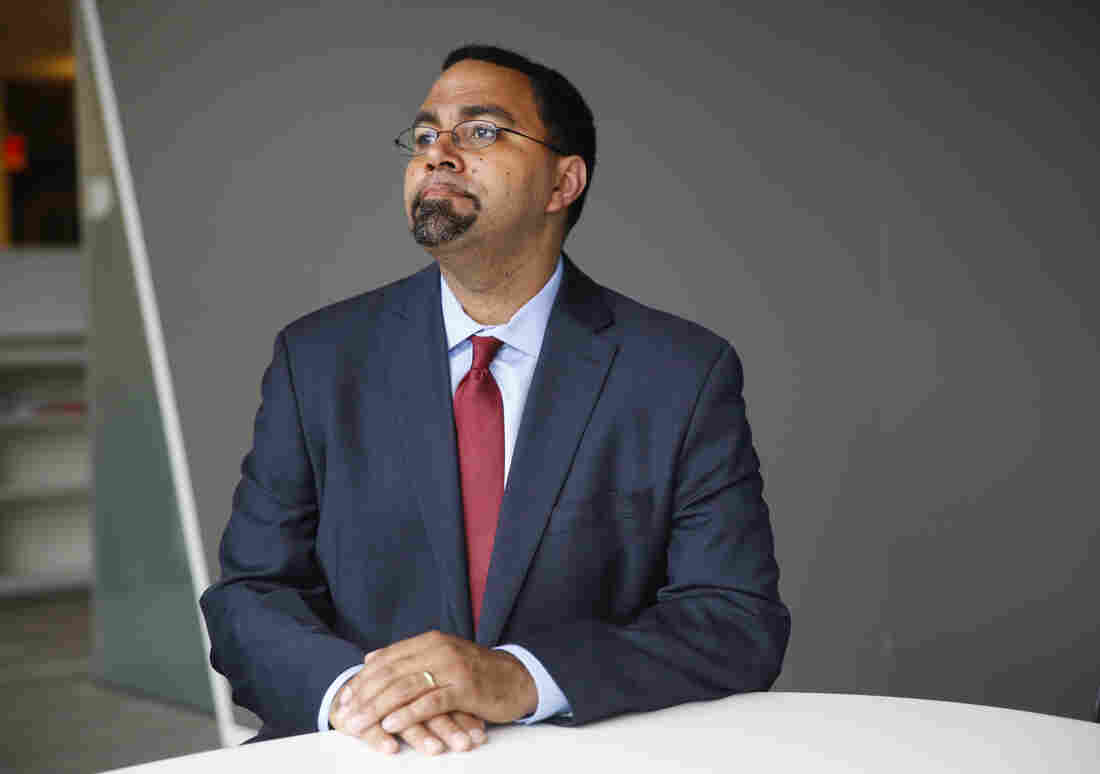 Education Secretary John B. King Jr. at NPR headquarters in Washington. King has worked to protect kids, especially those who have been traditionally marginalized — children of color, English language learners, students with disabilities and those living in poverty. Elissa Nadworny/NPR hide caption 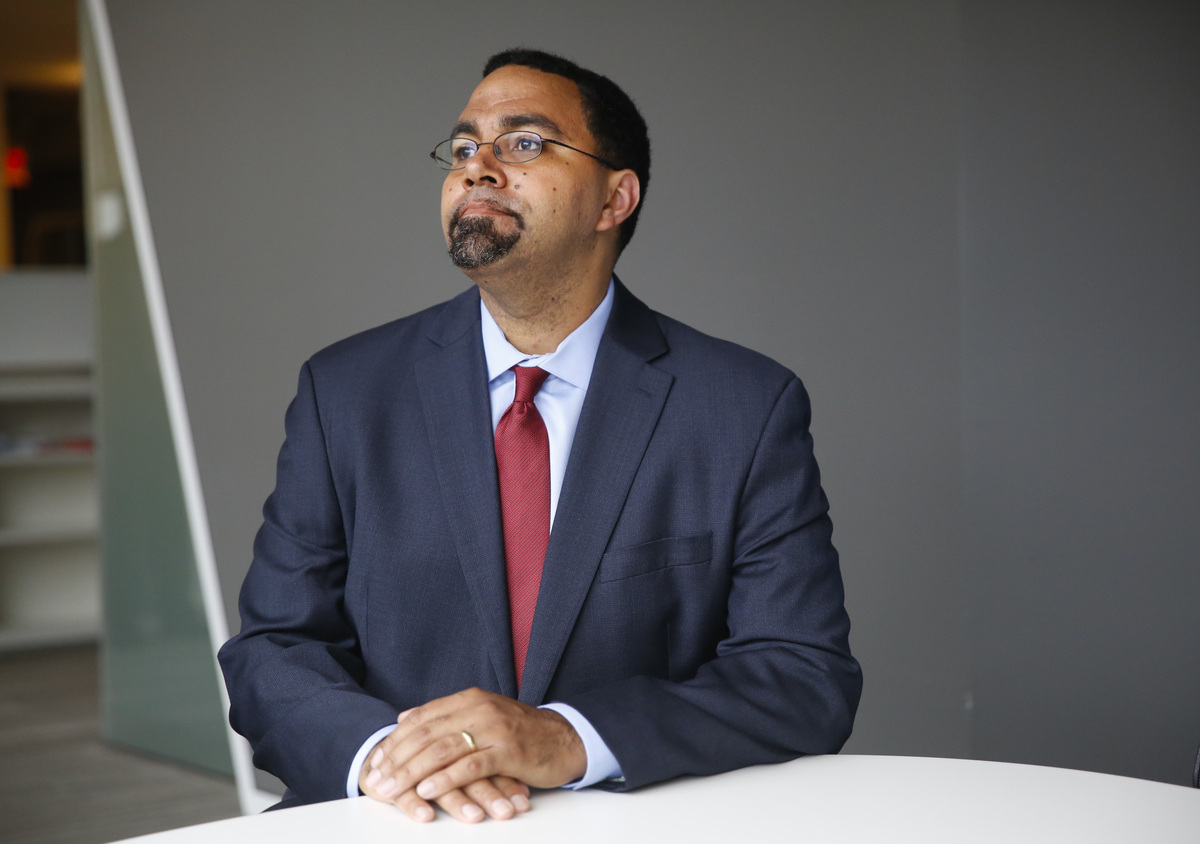 Education Secretary John B. King Jr. at NPR headquarters in Washington. King has worked to protect kids, especially those who have been traditionally marginalized — children of color, English language learners, students with disabilities and those living in poverty.

He didn't have long. Education Secretary John B. King Jr. was confirmed by the Senate in March 2016 after President Obama's long-serving secretary, Arne Duncan, stepped down at the end of 2015. No matter the outcome of the 2016 presidential election, King knew that Obama would be out in a year and replaced by a president who, regardless of party, would almost certainly replace him.

At the helm of the Education Department, King followed the polestar that had guided him as a teacher, principal and as deputy secretary under Duncan: protect kids, especially those who have been traditionally marginalized — children of color, English language learners, students with disabilities and those living in poverty.

King knows all too well what it means to live on the margins. Raised in Brooklyn, he lost both of his parents by the age of 12 and found the stability he needed not at home, shuttling between family members, but at school. He credits several public school teachers with saving his life.

The 'Intolerable' Fight Over School Money

In writing rules for the new federal education law, the Every Student Succeeds Act, King fought to include protections that would prevent districts from spending more money in low-poverty schools than in their neediest classrooms. The move infuriated Republicans in Congress, who accused King of overreach, and vexed teachers unions. King has also used his bully pulpit to urge schools toward greater racial and socio-economic integration.

With two weeks left as secretary, King sat down for an exit interview in his Maryland Avenue office overlooking the Smithsonian National Air and Space Museum in Washington, D.C. What follows is an edited transcript:

What was your best day in the job?

I think about a session I did with former Secretary Duncan a few weeks ago, with young men he's working with in Chicago who have been involved in the criminal justice system and are trying to get their lives back on track, and he's working to help them. It was a powerful moment, both because of the difference that mentors are making in their lives and also just talking with them about my own experience.

It's just clear to me: There but for the grace of God go I. You know, a small number of differences in experiences for me, and I would have been dealing with the same struggles that they are. I was fortunate that I had teachers and mentors who kept my life on the right path after I lost my parents, and these young men didn't have those mentors and teachers at the right moment. But now they do have folks who are intervening in their lives. Seeing that was a reminder of the urgency of our work. Schools and educational opportunities can save lives.

You've talked a lot about your biography while in office. Given that Donald Trump's pick to succeed you, Betsy DeVos, is a billionaire who has never attended public schools, do you think biography matters when it comes to running the Education Department?

What matters is beliefs and actions. For me, it is true, that my biography — my experiences in school, as a teacher, as a principal — shape my beliefs and how I approach the job. But you can arrive at similar beliefs and actions from different experiences. I think, fundamentally, regardless of party, anyone in the job of secretary needs to be focused on two things.

You've been a champion of diversity in schools, encouraging districts toward racial and socio-economic integration. But, after a presidential election in which race and class became dividing lines, do you worry that much of the country isn't with you and doesn't want to hear the argument?

I think Americans value diversity and the promise of equality of opportunity. I do worry that we haven't gotten as far as I would have hoped on the work of school diversity, particularly when you think about it in the broader sweep of American history. It's more than 60 years past Brown v. Board of Education, and we've got communities around the country that are actually more segregated today than they were 10 or 20 years ago by race and by class.

I think we'd be in a better place as a country, we'd have a better dialogue, if students had the opportunity to go to school with diverse student populations and to have diverse educators in the classroom. And the research evidence bears that out. Students not only do better academically, but they are better prepared to succeed in a diverse world if they've had those diverse school experiences.

I'm optimistic that, as a country, there is a realization that the success of our public education system is so central to our long-term future that we cannot afford to slide backwards. We achieved a high school graduation rate of 83 percent because we've seen significant reductions in the dropout rates for African-American and Latino students. We can't go back from that. And we've got 10 percent of our students around the country who are English language learners. Our success as a country depends on those students having excellent educational opportunities. We can't go backwards on that.

Both Trump and DeVos have been supporters of school vouchers and of letting federal Title I dollars follow low-income students wherever they choose to go, even if it's to private, religious schools. How do you feel about that?

Vouchers are not a scalable solution to the challenges we face in American education. In many places, I think, the conversation about vouchers is driven by a legitimate concern about how we ensure equality of opportunity. I think the way we do that is through strong public schools. District schools, traditional schools, and charter schools. And part of how we ensure schools are good is we have meaningful systems of accountability that focus people on outcomes for kids.

I worry that, in some states, whether it's vouchers or charters, where there aren't good accountability systems in place, you have a proliferation of low-performing schools, and you don't have the outcomes for kids that are, at least in theory, the rationale for the policy. So our support for charters is grounded in the notion that, yes, we can have an innovative charter sector that develops new strategies, new approaches that can be shared with traditional district schools. But that only happens when you have a strong charter law — you have high standards for who gets a charter and meaningful accountability.

Is there a voucher plan that you could support?

No. Honestly, I don't think vouchers get at the real challenges that we have. You know, I understand folks' concern about ensuring opportunity for the kids in our highest-needs communities, but the way we should do that is to have strong, high-quality early childhood education, K-12 schools that are providing a rich, well-rounded education that includes not just English and math but science, social studies and the arts, opportunities to take advanced coursework in high school, and then to have strong supports so that students can make the transition from high school into post-secondary opportunities. That, to me, is the answer.

I was in a school yesterday where all of the students receive free or reduced-price lunch and roughly two-thirds are below grade-level in reading and math. I asked a couple of the teachers if they had a question they'd like me to put to you. Without missing a beat, the English language-arts teacher said, 'You ask him why it is I'm still giving my kids standardized tests, when kids don't come standardized.'

I think, at the end of the day, assessments are one tool among many that we have to get a sense of whether students are making progress. We've been very clear, we don't think you should judge the performance of a student, teacher or a school just based on a single test score. But it is useful to know how students are doing in reading and math and science and writing, and it's important for us as a country to know whether or not we're making progress. It's important for this country — for states and districts — to know where there are achievement gaps so they can intervene, where schools are struggling so they can provide support.

But I imagine that question is driven in part by a sense of frustration that so much attention was placed on one single indicator. And I think the Every Student Succeeds Act gives us an opportunity to look at multiple indicators, things like chronic absenteeism, so that we can identify early if a kid is missing a lot of school, what's going on behind that.

What's the single most important piece of advice you could share with your successor?

I don't know if I can do one. I'd say two. One is to protect kids. Kids need to feel safe and supported in school. For some kids, kids like me, school may be the only place that is consistent, supportive and safe in their lives.

The second is to listen — to students, teachers, parents and communities — and try to understand the challenges they are facing and how we can help.

What's next for you?

I don't know yet. I'm very focused on the stuff we need to get done. We still have things on our list. We're going to be working hard all the way up until the last moment. And then I'll take some time with family and decide what's next. But whatever I do will be focused on the kids who are most vulnerable, kids for whom school is the difference — like it was for me.