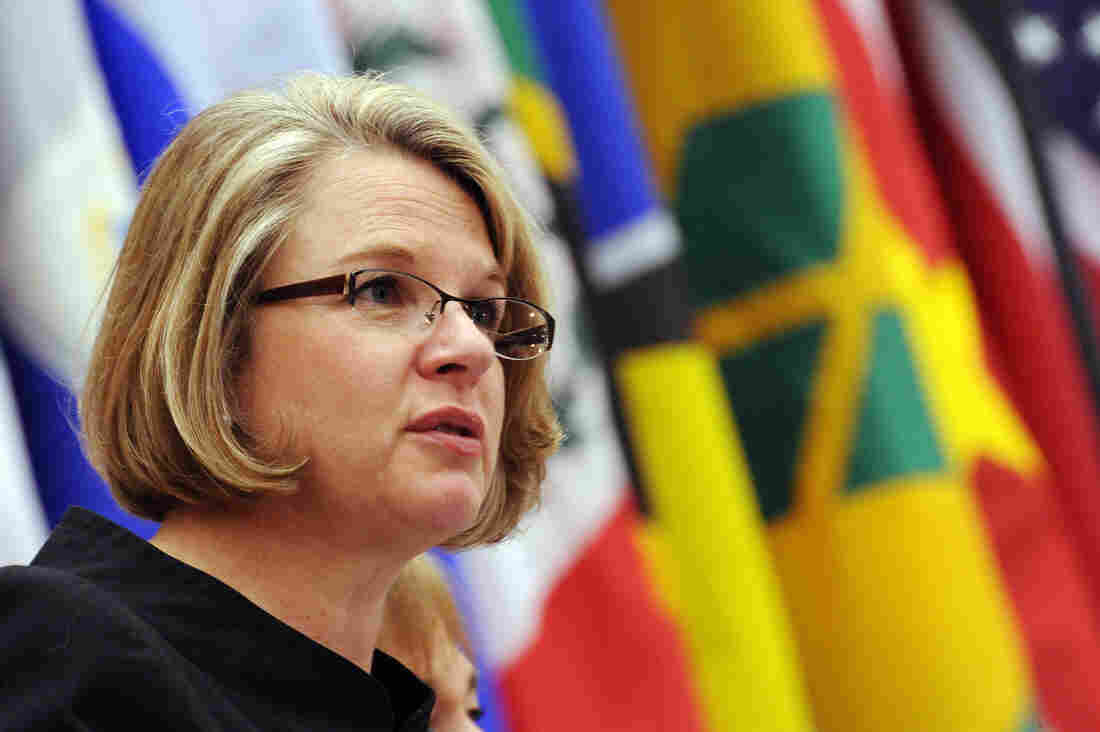 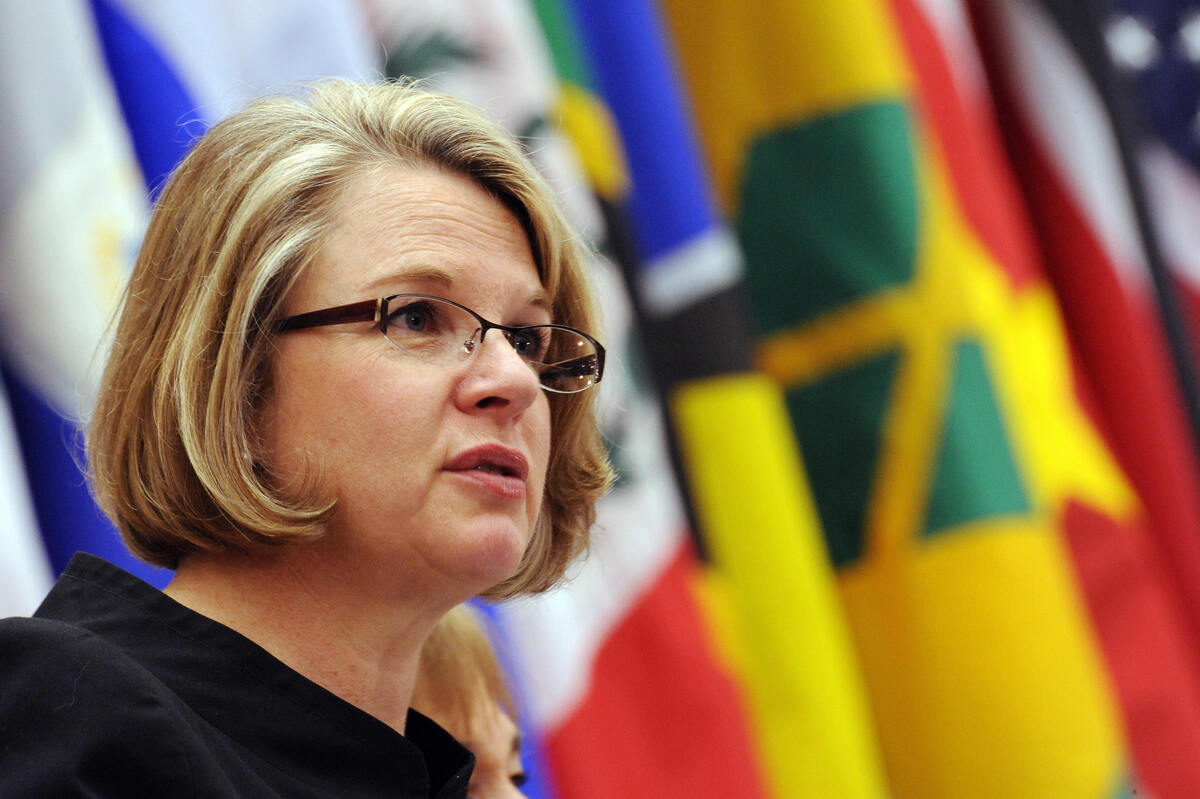 Margaret Spellings was the U.S. education secretary under George W. Bush from 2005-2009.

Since he began running for president, Donald Trump has been talking about a smaller federal role in education.

The confirmation hearings begin Tuesday for the person he has nominated to carry out his vision, Betsy DeVos. In her home state of Michigan, DeVos has been a powerful advocate of school choice and a larger private role in education. If confirmed, she'll take over a huge federal bureaucracy of some 4,400 employees and a $68 billion budget.

To get an idea of what's ahead, I reached out to a former Republican education secretary, Margaret Spellings. She ran the Education Department under George W. Bush, from 2005 to 2009, and was a leader in the implementation of his signature education achievement, the No Child Left Behind Act.

Today, she is the president of the University of North Carolina system, with 17 campuses and more than 220,000 students. She says she has not advised the incoming Trump administration on any official level, but she has met Betsy DeVos. She also recently penned a joint letter with other former Education secretaries William Bennet and Rod Paige endorsing DeVos.

Here's an edited version of our conversation.

How do you balance the federal, state and local roles in improving public education?

This is something we've debated for a long time. It changes. We've seen the pendulum swing from a more muscular federal role like we had during No Child Left Behind in the Bush era, to times when the primacy was in the states, which is the case now [with the Every Student Succeeds Act]. We're now in a phase where states can be incubators of innovation.

But what specifically should the federal government do to make sure low-income, minorities and kids with learning disabilities receive the best education possible? Isn't equity the central issue here?

We do not have equity without accountability and transparency. The reason we've moved the needle for poor and minority students is because we've cared enough to find out how they're doing and made them a priority. When we walk back — and this is going to happen [under ESSA] — at the state level, now that we have this crazy quilt of accountability systems with a lot of fine print, we know who gets masked in the data. That's what I'm going to be paying attention to. The federal role in education is, and has always been, a civil rights focus.

Did the U.S. Education Department, under both George W. Bush and Barack Obama, go too far in dictating or imposing education policies that weakened local control of schools?

When we spend a lot of federal money, we ought to expect something for our money.

But federal dollars on average make up no more than a small percentage of local school budgets.

Right, but it's billions of dollars. So we should know how well we are meeting the objectives of Title I [the government's main aid program in K-12 education] helping poor and minority students meet their full potential. In my book, accountability and transparency and measurement come into play. But we should take a lighter hand [in terms of solutions] and those [solutions] ought to be reserved for states.

And frankly, in NCLB's case, the federal intervention was oversold. There was a ton of local control in funding and policymaking.

But you would agree that the federal government's relationship with states was strained and adversarial?

Well, one of the things I'm proud of with NCLB was that it was a public policy debate that involved compromise. The construct for NCLB was that we care about poor students. That we invest resources through a muscular federal role.

Among the ideas in Donald Trump's education agenda are school choice, ending the Common Core and shrinking or eliminating the Department of Education. Are those the right things to focus on right off the bat?

The Department of Education should not be abolished. I do take the view that we need a right-sized department of education focused on our neediest students.

On Common Core standards, local control tells us that when states embrace standards, [federal officials] are not in a position to stop them. That ship has sailed. I can't imagine that the administration would insist that states must abandon Common Core.

On choice, it's tricky to drive a policy agenda on something like choice when [the federal government represents] only 8 to 9 percent of school funding. How do you compel state and local taxpayers to spend their dollars on choice? That'll be interesting to see. Having people vote with their feet makes a lot of sense, if we have the right kind of transparency, information and accountability.

What do you think about Trump's proposal to "re-purpose" $20 billion in federal funds to create a voucher program?

I think they'll try to create a pot of money that mayors or governors would contribute to to create [vouchers]. That's a possibility. Another possibility is block-granting funds to support vouchers and school choice programs.

Do you have any concerns about a possible drop in federal funding for early childhood education?

The nation's two big teachers unions have vowed to oppose Trump's education agenda. How can Trump and his nominee, Betsy DeVos, avoid a big fight with unions?

We do need to make a distinction between national teachers unions and teachers and what their concerns and issues are. Mrs. DeVos wants to hear from teachers. She knows what she doesn't know, and I think she understands she needs to have good relationships to be a successful and productive secretary of education.

I think her approach is going to be around the empowerment of individuals to vote with their feet to make meaningful choices. Most of our students are educated in traditional public schools, so [choice] is part of the solution but not a silver bullet.

What about higher education — what are you concerns there?

Where I would expect the Trump administration to focus is on workforce training, community colleges and people who need credentials more than BA degrees.