Accessibility links
Education Department Drops Fight Over School Money : NPR Ed A controversial idea falls by the wayside, for now, involving how schools can use federal money for low-income students. 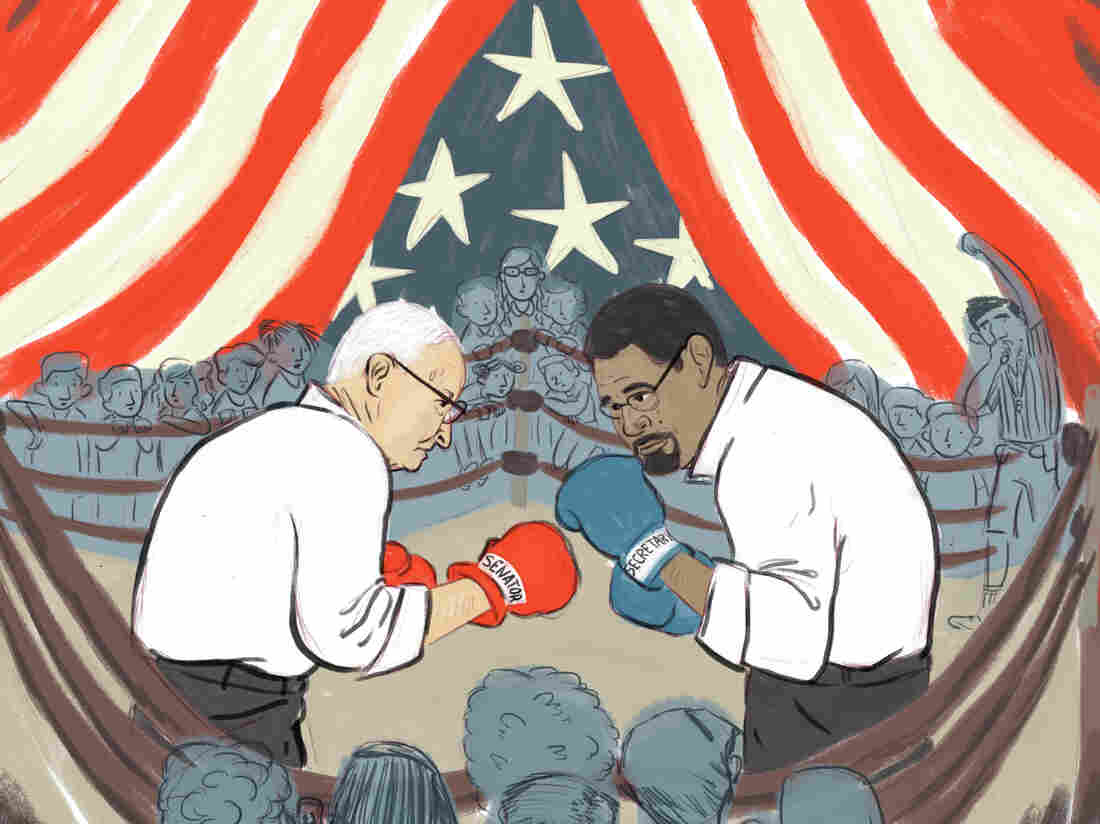 Republican Sen. Lamar Alexander and Education Secretary John B. King Jr. had been in a battle over Title I enforcement for some time. LA Johnson/NPR hide caption 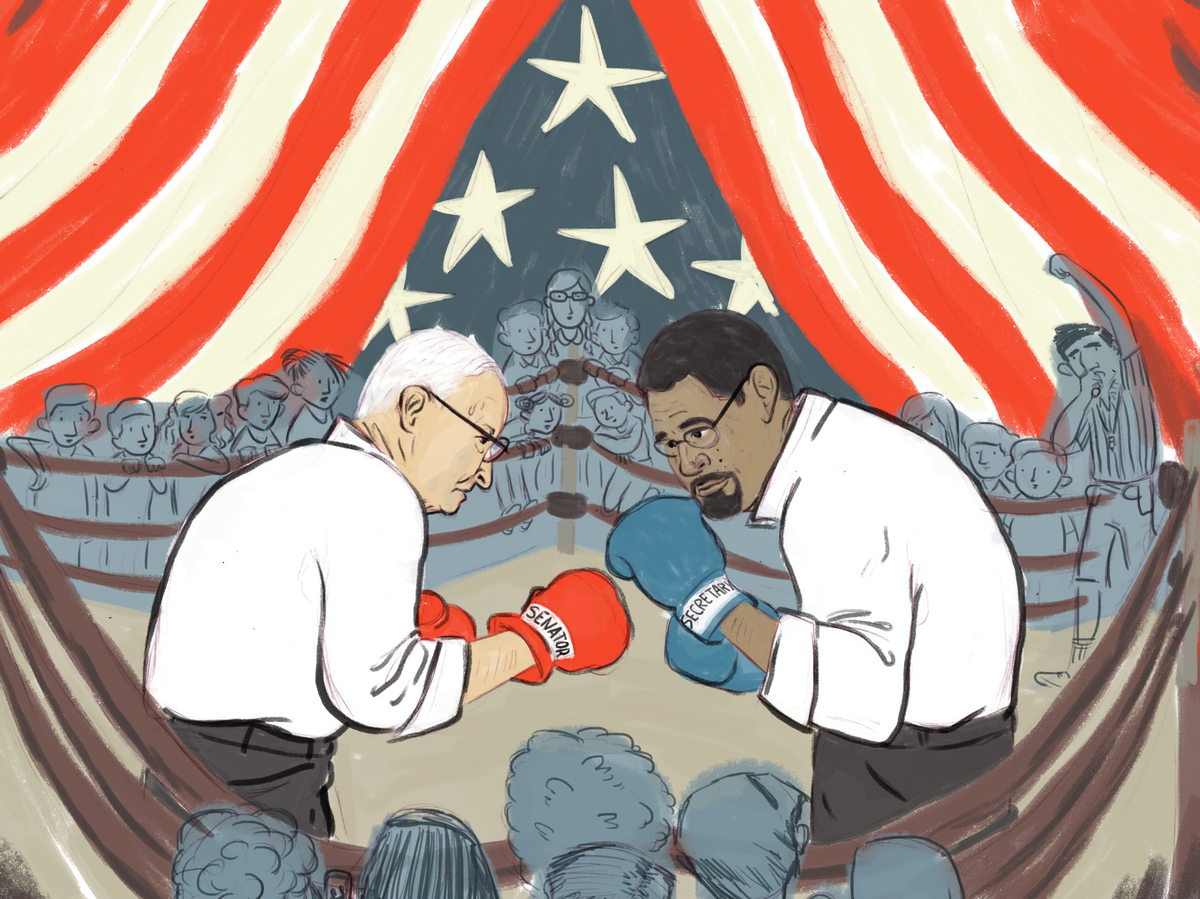 Republican Sen. Lamar Alexander and Education Secretary John B. King Jr. had been in a battle over Title I enforcement for some time.

The U.S. Department of Education has withdrawn a proposal that could have fundamentally changed the flow of federal dollars to schools that serve low-income students.

"The law is clear that it is unacceptable to systematically underfund low-income schools and fill the hole with federal resources," explained Dorie Turner Nolt, a spokeswoman for the education department. "While we worked tirelessly to put forward a regulation that implements that simple requirement and to incorporate the extensive feedback we received, we ultimately did not have time to publish a strong final regulation that lives up to the promise of the law."

This brings to an end a long and bitter fight between the Education Department, led by Secretary John B. King, Jr., and Sen. Lamar Alexander, R-Tenn, himself a former education secretary and current chairman of the Senate committee that handles education.

"This is an intolerable situation," Alexander said of the Department's so-called "supplement-not-supplant" proposal back in May, in a heated speech on the Senate floor. "If the regulations are not consistent with the law, I don't believe [states] should follow them," he said. "If the department persists, then the state should go to court to sue the department."

Why was Alexander so angry?

The easy answer: Title I. That's the $15 billion the federal government sends to districts to help schools that serve lots of low-income students.

Alexander and King disagreed on how to enforce the new law governing Title I. It says that, to get federal money, districts have to prove a few things — among them, that they're using state and local dollars to provide roughly the same services to kids in poor and non-poor schools alike.

"Basically, schools within a school district have to be similar," Liz King said in a May interview. She's director of education policy at the Leadership Conference on Civil and Human Rights. "The idea here is that if they're not similar, then these federal dollars are just going to fill in gaps."

Everyone agrees that Title I dollars are not supposed to gap-fill. They're meant to be extra — the technical term is "supplemental" — for low-income kids who need them most. What the sides don't agree on is how districts prove they're not just filling gaps and that state and local resources are being spread fairly.

The current system is not fair, King insisted at the time. "What we see, as we look around the country, is districts where they're actually spending significantly more in their non-Title I schools than they're spending in their Title I schools."

Nora Gordon, of Georgetown University, studies Title I and, when interviewed back in May, said much of that spending gap between poor and non-poor schools comes from teacher salaries.

And novice teachers cost less. That matters because, believe it or not, most school budgets are based on staff positions instead of actual teacher salaries.

To comply with the law, according to Sen. Alexander, districts have to show that all schools are getting their fair share of jobs, not dollars.

As a result, schools may have similar student-teacher ratios, but non-Title I schools often end up getting and spending more local and state money to pay for their more experienced teacher corps.

The Education Department had hoped to change that. It proposed a way to require that districts prove their actual spending per student in poorer schools is equal to, or greater than, the average spent in non-poor schools.

But Alexander wasn't having it. He insisted that Congress had debated whether to address this teacher-salary spending gap and chose not to. To him, the law was clear:

"You've got to be spending a comparable amount of money in schools that get the [Title I] money and schools that don't — except teacher salaries may not be included in that computation. That is in the law."

A report from the nonpartisan Congressional Research Service appeared to back Alexander, finding that "a legal argument could be raised that ED exceeded its statutory authority."

In response to the news that King had dropped the regulations, Alexander released this statement:

"I am glad the Education Department has listened to Congress and has chosen not to move forward with its proposed 'supplement-not-supplant' regulation. This proposal would have dictated from Washington how states and school districts should spend nearly all state and local tax dollars on schools in order to receive federal Title I dollars — which are only about 3 percent of total national spending on K-12 schools. A regulation like this is not authorized by law; in fact, it is specifically prohibited by law."

"We don't want to hurt one school to help another school. We have to help all schools," Weingarten said when we spoke in May.

Her concern was that, unless districts and states find new money for their poorer schools (and our School Money series showed how rare that is), their less-poor schools would — under the Education Department's proposal — have to make cuts. That could mean losing valuable programs or even transferring some of those more experienced (and expensive) teachers.

"And if you know other kids are gonna get hurt by this, why would you do it?" Weingarten asked.

In this way, the Title I fight pitted pragmatism against principle.

On one side were Weingarten and many of the nation's school leaders, who said this attempt to level the playing field was well-intentioned but would come at too high a cost to other kids and schools.

In the opposite corner were the Education Department and advocates who argued: This was about protecting students' civil rights.

It's a simple question. The answer is anything but.