Accessibility links
Dyslexia Through The Eyes Of Artists: 6 Artists Share Their Work : NPR Ed It's the most common learning disability, yet it's hard to understand. We asked six artists who have dyslexia to share their experiences in images. 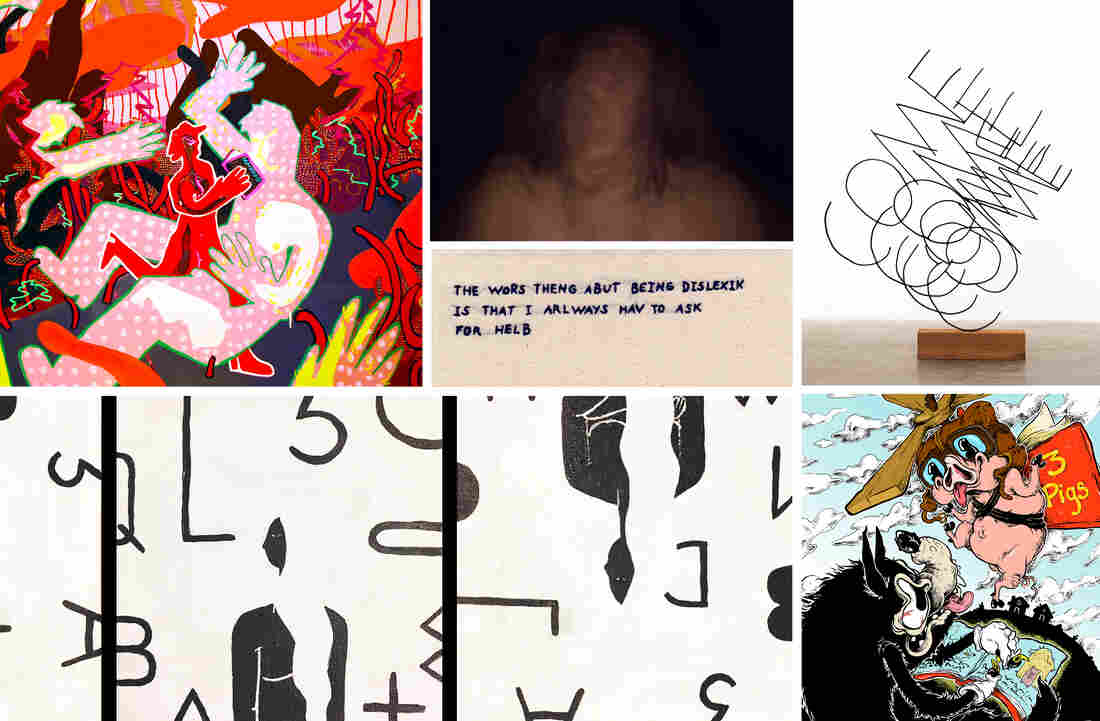 Six artists who have dyslexia find their words in art. NPR hide caption 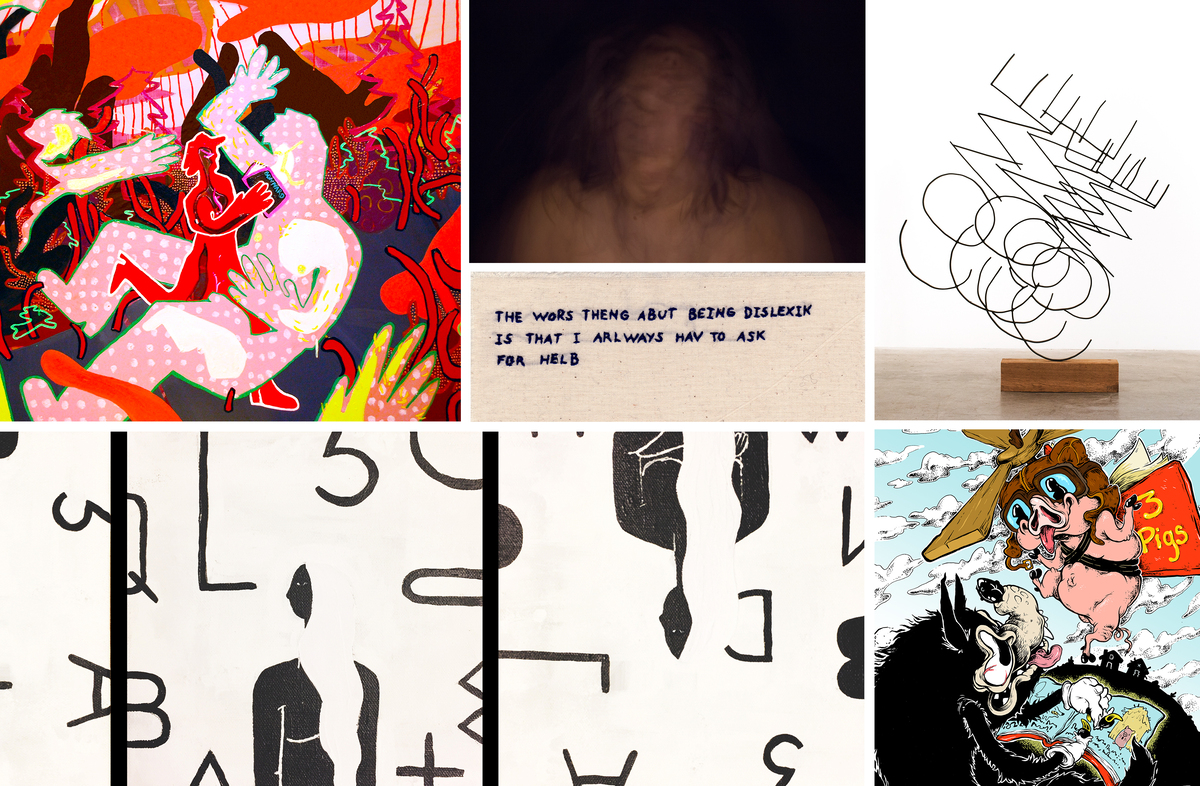 Six artists who have dyslexia find their words in art.

"I understand things visually, by finding them in paint. I don't know if my dyslexia causes me to be this way, but I have a feeling it does." — Rachel Deane, painter.

We know lots of facts about dyslexia: It's the most common reading disorder. It changes the way millions of people read and process information.

But we know much less about how it feels to people who have it. How it shapes your self-image, your confidence and how people see and react to you.

And so I reached out to some really creative people — artists who have dyslexia — to talk about this.

One of the most fascinating things I heard is that dyslexia plays a big role in their creative process. Some said their struggle with written words informs their art, and that the struggle to express ideas they can't in writing makes their art unique.

I asked six of these artists to show me through their work what dyslexia is like. Here's what they came up with. 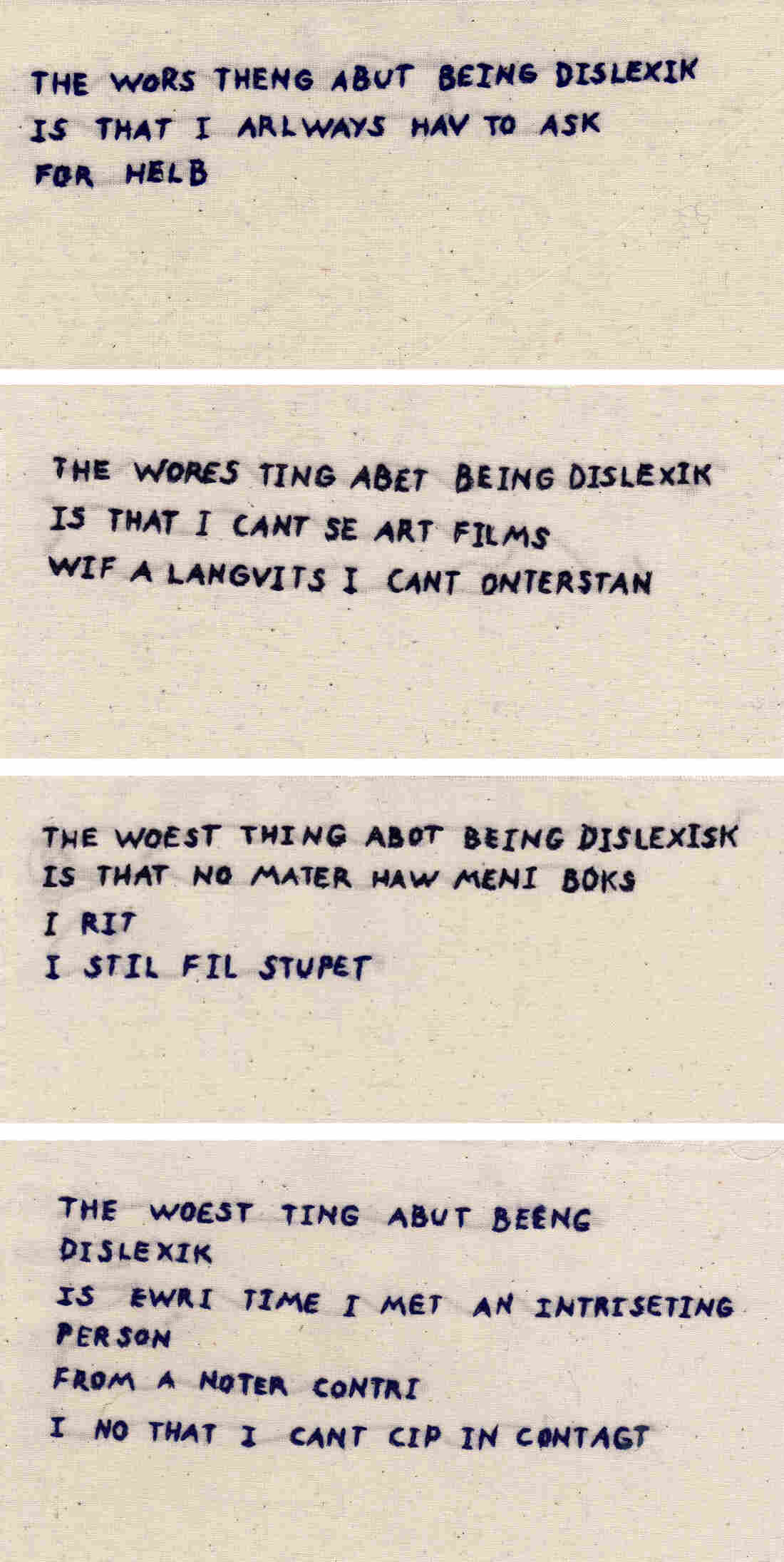 School was a daily nightmare. Teachers thought I was lazy rather than dyslexic, and at that time if you were dyslexic you were considered plain stupid. I was given books for 6-year-olds when I was 10-12. Finally, I sort of just gave up on the whole thing and began to injure myself by cutting into my skin. I never graduated school, which is very unusual in Denmark.

For more information and help, check out:

Yale Center for Dyslexia and Creativity

I use my dyslexia in everything I do. It's my technique. It began as an accident. When I started to attend the Art Academy in Denmark, I painted a painting and added some texts. I had no time to correct the spelling, so the next day all the other students and professors were trying to read their way through my uncorrected text, and suddenly they were dyslexic. They were having a hard time reading my words. I thought to myself, hmm, this is a very interesting and effective tool. I turned the whole thing around. But it was a giant leap for me to make this change. Since then, I never correct anything. And sometimes the wording is correct — by accident.

My struggle with dyslexia doesn't define me, and I have never felt defined by it. It was just something that I dealt with and overcame to get where I am today. Art was the answer for me. Many people deal with dyslexia on a daily basis, but they don't let it define them. Dyslexia isn't some disability that makes you a struggling student for the rest of your life, it is simply a hurdle that some people must jump in order to succeed. 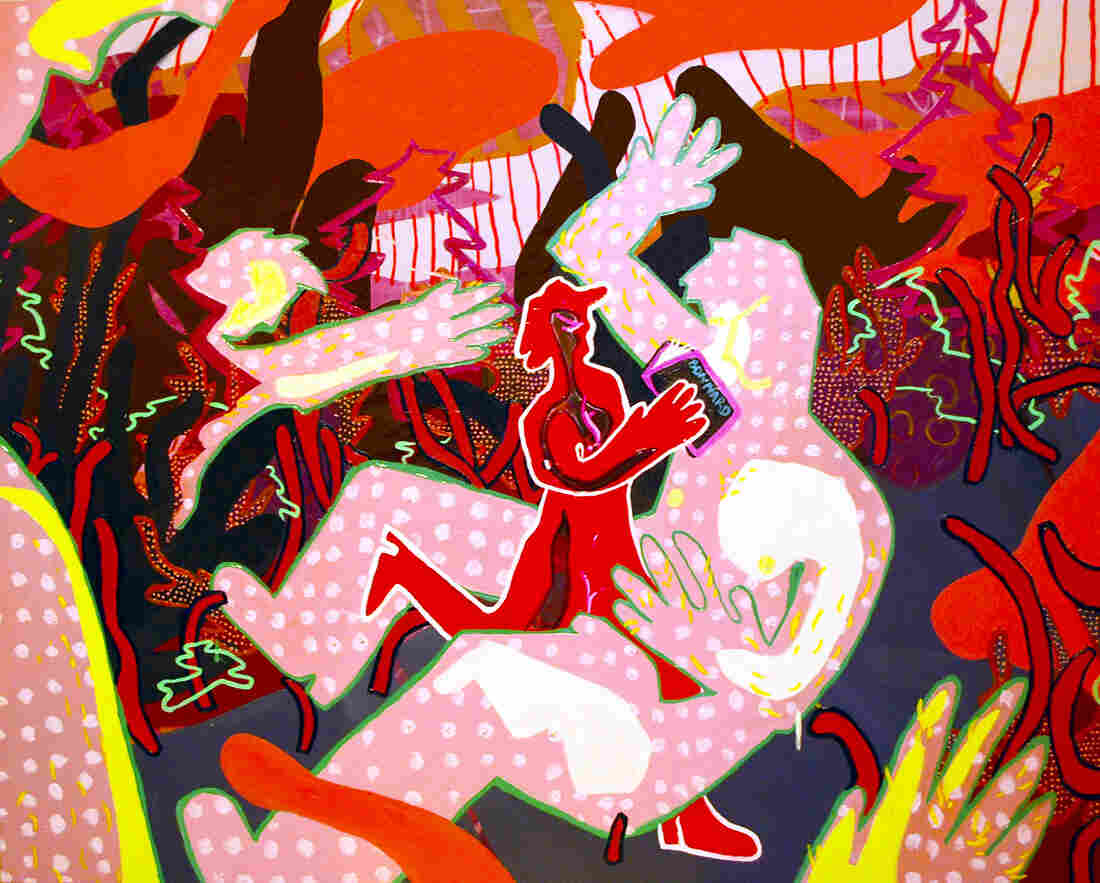 Rachel Deane, In Search For A Weapon I Found My Bonnard Book, oil on canvas, 40 inches by 54 inches; 2016. Rachel Deane for NPR hide caption 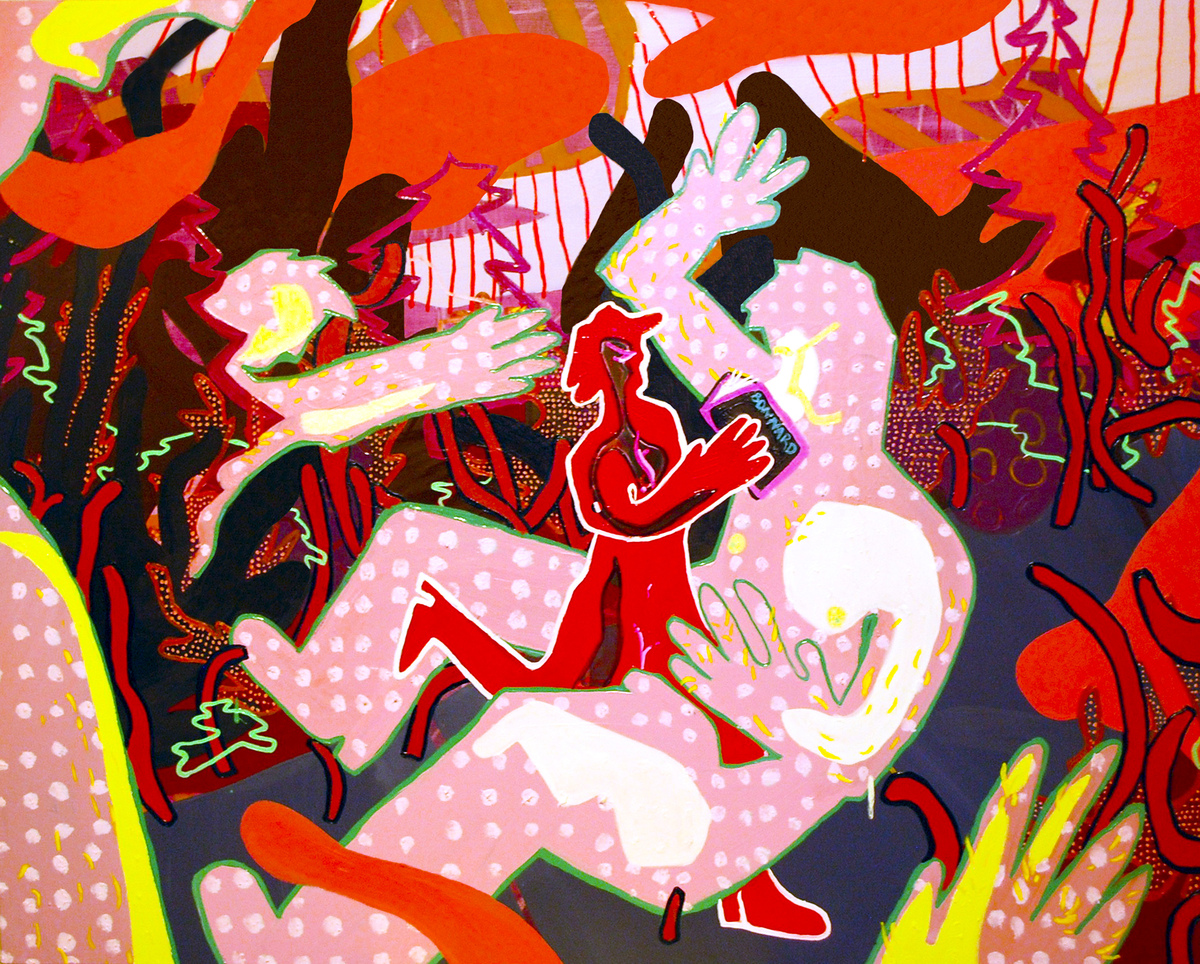 I think that my relationship to my dyslexia manifests itself indirectly in my work. My paintings represent the way I see and process the world, the way I learn information. I learn visually and through narratives rather than by memorization or other standard education practices.

I saw a large retrospective exhibition of (the artist Pierre) Bonnard at the Musée d'Orsay a couple of years ago and was blown away by his use of color and texture. I could not walk away from the exhibition without purchasing the large, heavy catalog. My Bonnard book protects me visually and emotionally. I think this example shows the way I think, the way I process. I understand things visually, by finding them in paint. I don't know if my dyslexia causes me to be this way, but I have a feeling it does. 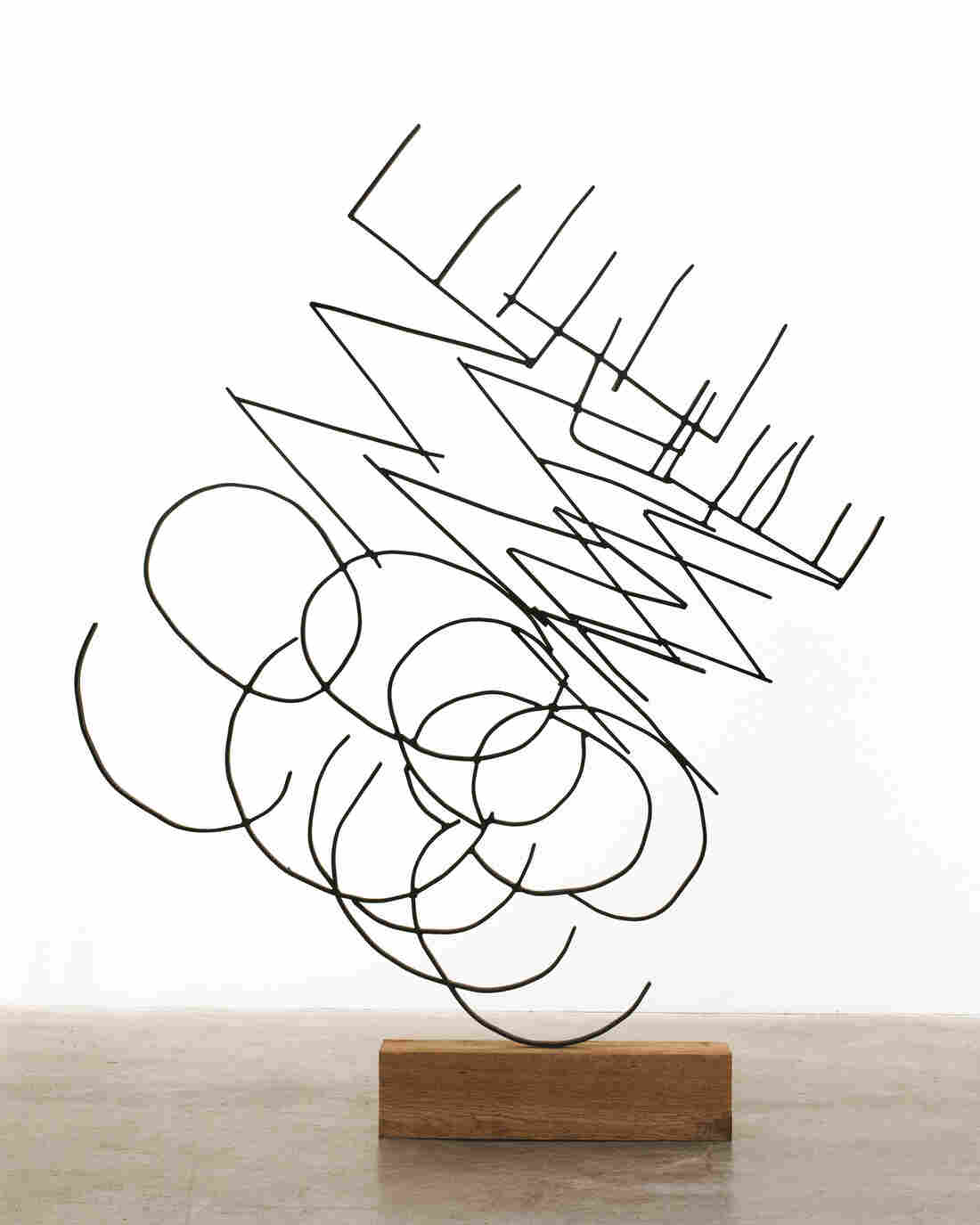 COME COME represents an attempt to find the area where communication breaks down into something more abstract. For me, language has always been somewhat of a struggle. The inability and difficulty to express myself through writing has been a particular struggle. In my work, I try to see these flaws as a new way of showing language by breaking it down into the physical lines to demonstrate how words are actually made. I collapse letters and words together and break them apart into a new way of expression. 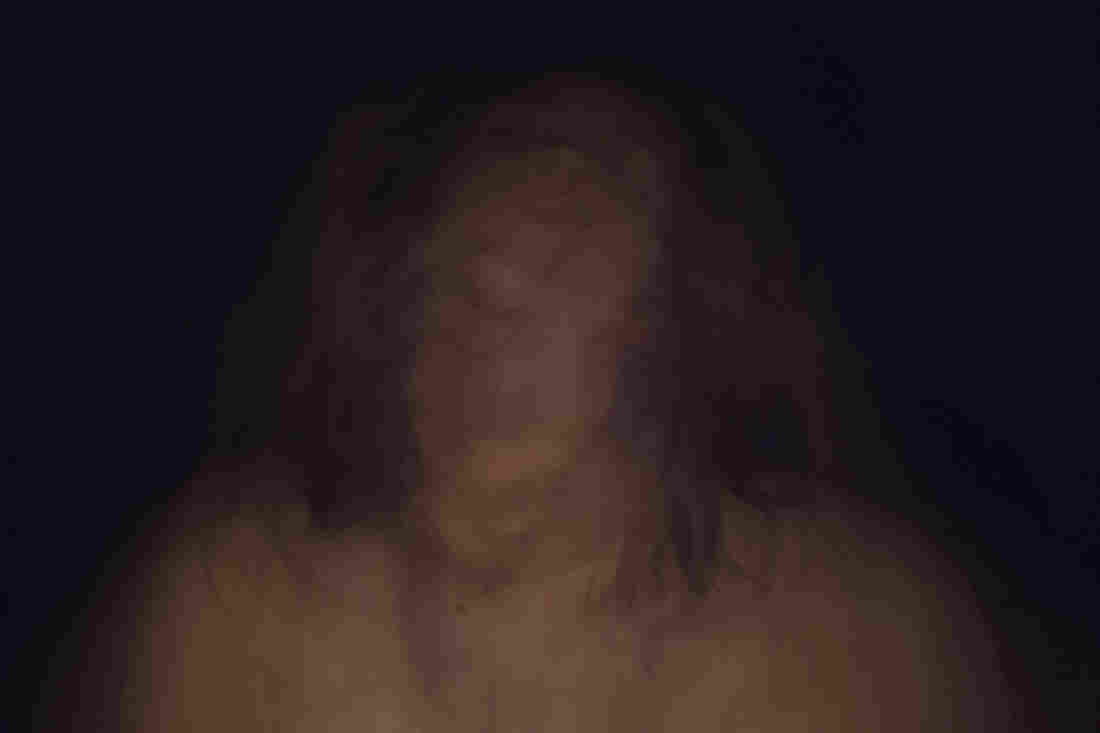 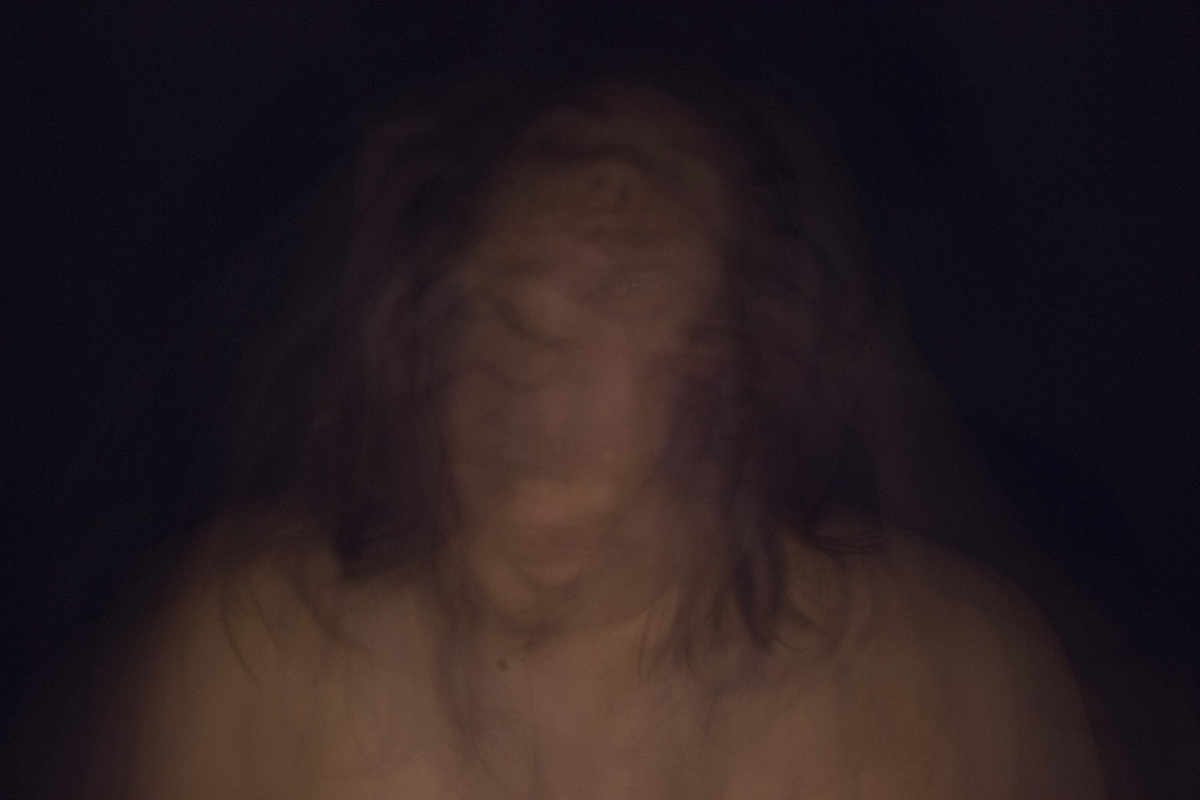 This piece represents my emotions toward my dyslexia. Every day I am stressed, dispirited and fed up because I never feel satisfied with my work — whether it's academic, my campus jobs or an artistic project. In the back of my mind, I have a voice telling me, "You're not enough, you can't fit in with the others." That's when those emotions rise up and overwhelm me. I work twice as hard as other students to understand what they were able to pick up quickly. Thankfully, my professors are flexible with my learning disability, but once I'm done with school, I won't have that help. I have to blend in with everyone else and pretend my learning disability won't affect my job. Those feelings will always be there with me, by my side. 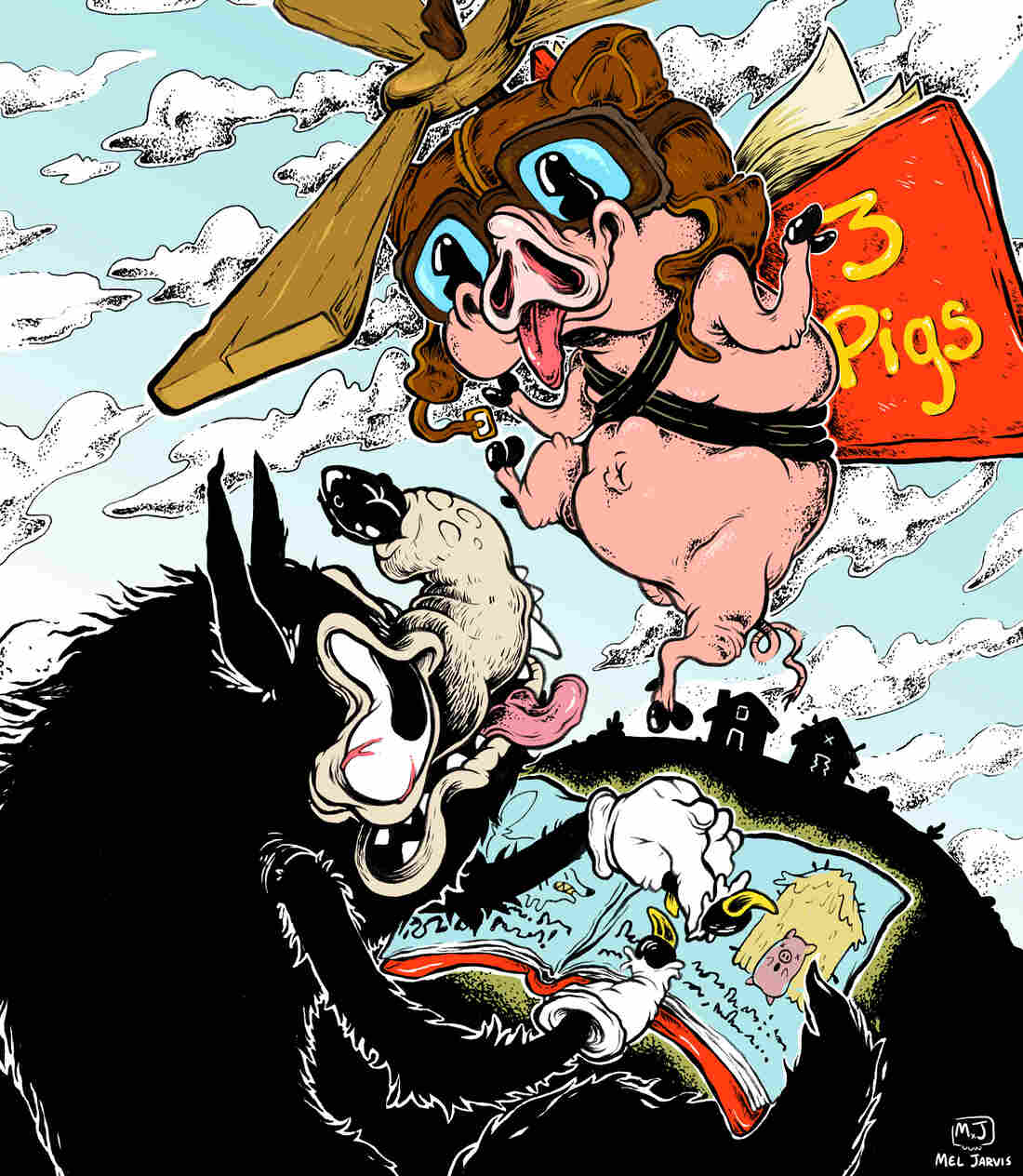 This little piggy didn't need to read the book to know how to outwit the Big Bad Wolf! I wish people didn't think dyslexia was only about mixing up letters. There are other frustrating effects, like memorizing verbal tasks, difficulty learning though written text, even the emotional frustration that comes with the whole package (just to name a few). I feel dyslexic creatives aren't much different than other creative people, but all dyslexic people are very creative.

Dyslexia: The Learning Disability That Must Not Be Named