Accessibility links
International Students Stranded By Trump Order : NPR Ed Many international students trying to get back to classes at NYU, MIT, Yale and other U.S. schools are now in limbo. 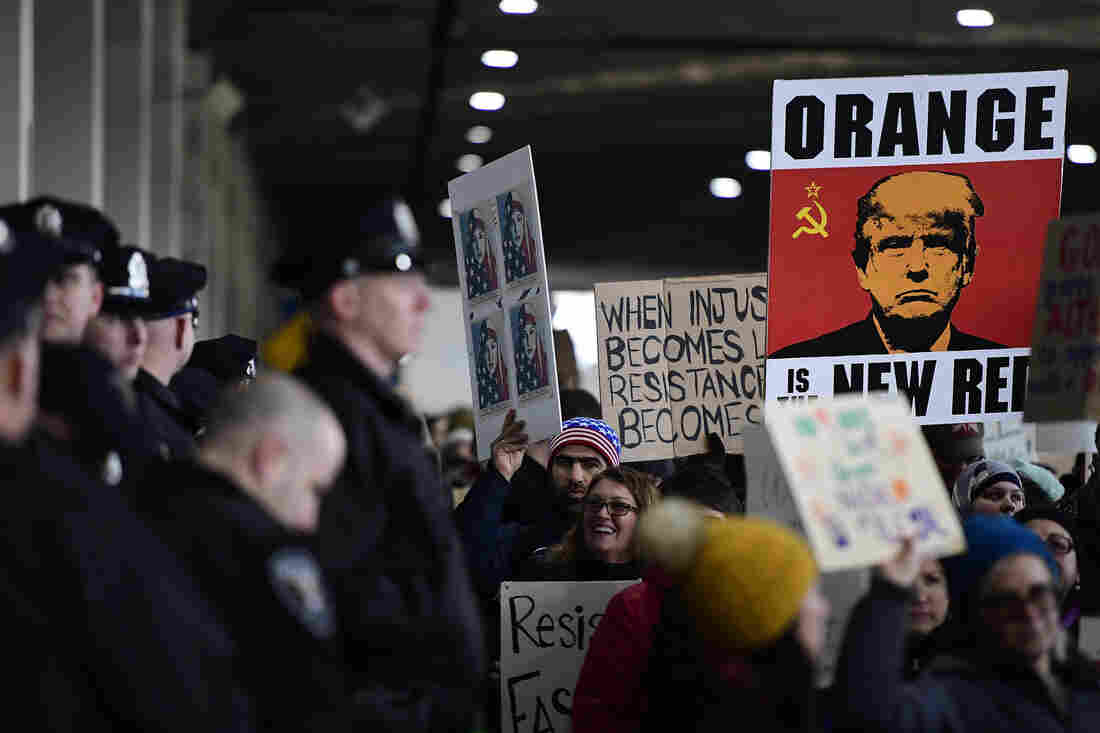 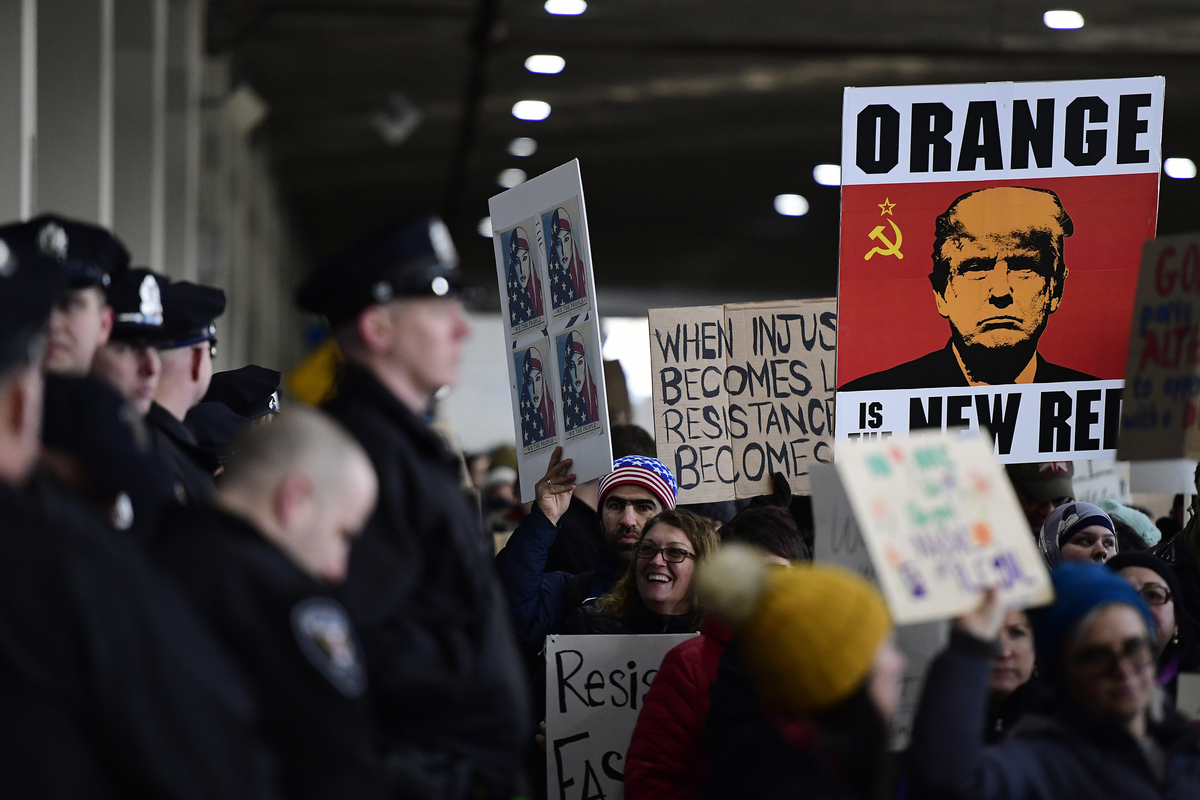 Saira Rafiee boarded a plane in Tehran this weekend on her way to New York. She had been visiting family in Iran and needed to get back to the U.S. in time for classes at City University of New York's Graduate Center, where she is a Ph.D. student in political science. But, as a result of President Trump's executive order restricting the travel of citizens from seven majority-Muslim countries, including Iran, Rafiee says she was detained in Abu Dhabi in the United Arab Emirates and, after nearly 18 hours, sent back to Tehran.

"...I have no clue whether I would ever be able to go back to the school I like so much, or to see my dear friends there. But my story isn't as painful and terrifying as many other stories I have heard these days. I know an Iranian student in the US, who was planning to go back to Iran to see her sister who has cancer probably for the last time, but had to cancel her trip because of this order. A dear friend of mine, a Columbia Ph.D. student, went to Canada on Friday to be with his fiancée for the weekend, and is not able to go back to his studies and work, back to his scholarly life. I know many students who are outside the US, doing fieldwork for their dissertation, and have no clue whether they can finish their studies after studying for many years..."

Allan Wernick, a law professor who runs an immigration resource center at CUNY, calls the situation a "crisis," noting that CUNY has more than 100 students from the affected countries who are here on student visas. "I refer to CUNY as the most immigrant-friendly university in the country," he says, with as many as 40 to 50 percent of the university's half a million students immigrants or the children of immigrants.

(Left) Protesters rally against the travel ban at Logan International Airport in Boston. (Right) Mazdak Tootkaboni is a U.S. Green Card holder from Iran and a professor at the University of Massachusetts at Dartmouth. Traveling back to the U.S. from France after the ban, he was separated from other passengers and questioned. Scott Eisen/Getty Images hide caption

Throughout the weekend, similar stories emerged from other U.S. universities. Mohammed Abdi, an anthropology Ph.D. student at Yale, holds a U.S. Green Card and was in Dubai awaiting a visa to continue his field research in Kabul, Afghanistan. But, as a result of the executive order, he's worried he cannot return to the U.S. Nor can he stay in Dubai for more than 15 days. And, because of his previous work as a human rights activist, he says he can't safely return to his home country of Iran. "It's very ambiguous," Abdi told NPR Ed via Skype. "I am essentially stateless."

Undergraduates have also been affected by the new restrictions, including Niki Mossafer Rahmati, an MIT engineering student and member of the sorority, Sigma Kappa. She was leaving her parents in Iran, headed back to the U.S. for the start of the semester, when she was detained in Qatar. Like Rafiee, Rahmati was ultimately returned to Iran and described the experience on Facebook:

"...My inbox is flooded with messages and emails of love and support. I am truly speechless, grateful and proud to [be a] part of the MIT community. I have never been subjected to any form of religious or racial discrimination at MIT. Our community is extremely diverse, inclusive, supportive and accepting of individuals and their backgrounds. But I cannot believe all this love is coming from the same country that banned me from entering its borders just a couple of hours ago..."

The number of students detained at airports in the United States was not immediately known, but Narges Bayani, a graduate student at New York University, was released on Sunday after being held for several hours at John F. Kennedy International Airport. "I am in awe and absolute admiration of the solidarity of the American people in response to such inhumane and discriminatory regulations. It feels like a sweet personal victory over hate," she posted on Facebook.

Universities and academic organizations largely condemned the travel ban and vowed to assist their students in returning to the U.S. David Elwell, director of MIT's International Students Office, told MIT's student newspaper that his office was "deeply disturbed" by the new policy.

Yale's president, Peter Salovey, said in a prepared statement: "American institutions of higher learning are united in their distress on behalf of our international students and faculty, and in their reliance on our communities' most fundamental values of accessibility and open dialogue. Our educational mission and the welfare of our community members are directly at stake. National security is of the utmost importance, but we are steadfast in asserting that this goal can be achieved while maintaining respect for core academic — and American — values."

Mitch Daniels, the former Republican governor of Indiana and current president of Purdue University, said the executive order is "a bad idea, poorly implemented" and he called on Trump to "promptly revoke and rethink it."

Alongside their educational mission and the welfare of students and faculty, many U.S. institutions of higher learning have significant revenue at stake if the United States becomes less welcoming to international students. According to the Institute of International Education, more than a million international students attend U.S. institutions, and because of their status, they do not receive most federal or state financial aid. This includes an estimated 17,000 students from the countries currently covered by the travel ban: Iran, Iraq, Libya, Somalia, Sudan, Syria and Yemen.