Accessibility links
Reaction To DeVos Vote Is Swift, And Divided : NPR Ed The Senate has confirmed Betsy DeVos as U.S. education secretary. Here's what educators, lawmakers and education groups have to say about it. 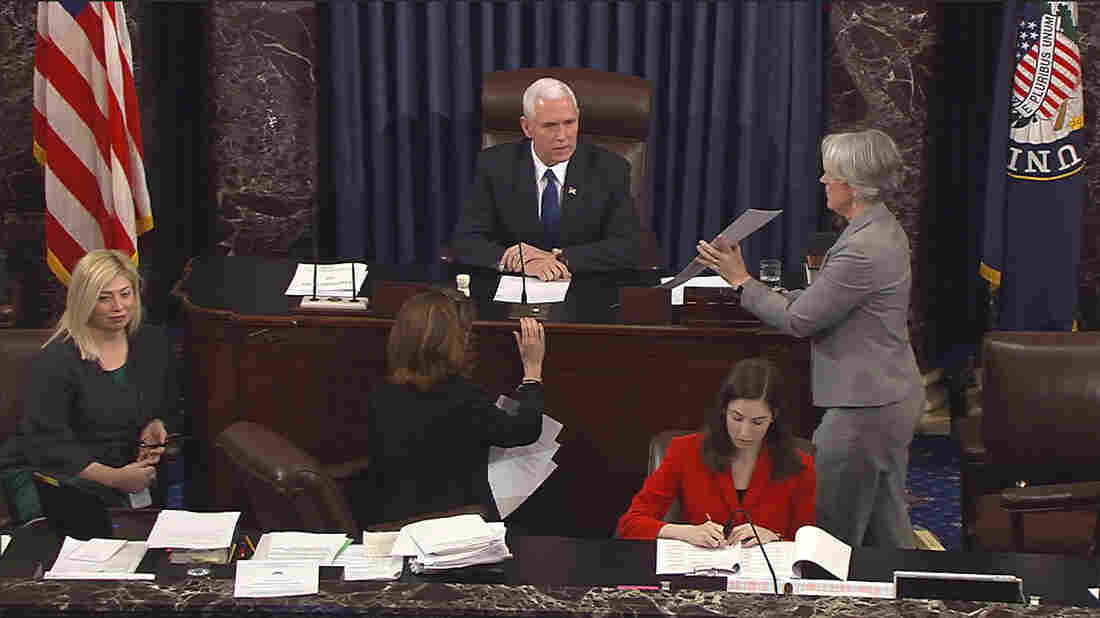 Vice President Pence presided over the Senate during the Senate's vote on Education Secretary Betsy DeVos. The Senate confirmed DeVos with Pence breaking a 50-50 tie.

The confirmation today of Betsy DeVos as the 11th U.S. secretary of education brought angry denunciations and firm pledges of support — no surprise for a Cabinet nominee who had become a lightning rod for Americans' views about their public schools.

Here's our roundup, with excerpts from reactions around the country:

First, DeVos herself tweeted shortly after her confirmation:

I appreciate the Senate's diligence & am honored to serve as @usedgov Secretary. Let's improve options & outcomes for all US students.

And this tweet from Vice President Pence, who cast the tie-breaking vote in the Senate:

Today’s vote to confirm Education Secretary @BetsyDeVos was a vote for every child having a chance at a world-class education. https://t.co/zdF3OzIohN

"Americans across the nation drove a bipartisan repudiation of the Trump-DeVos agenda for students and public education. Today's outcome marks only the beginning of the resistance."

And here's Randi Weingarten, president of the 1.6 million-member American Federation of Teachers:

" ... DeVos shows an antipathy for public schools; a full-throttled embrace of private, for-profit alternatives; and a lack of basic understanding of what children need to succeed in school."

"We believe that Secretary DeVos will put students and families first and we look forward to working with her to ensure each child has access to a high-quality public school and a safe and supportive environment in which to learn."

Jeb Bush, the former governor of Florida, who now leads the Foundation for Excellence in Education:

"Under Secretary DeVos' leadership, I am confident the federal government will loosen its grip on our education system and return power to the states and parents where it rightfully belongs."

Todd A. Cox, director of policy for the NAACP Legal Defense and Educational Fund Inc.:

"[DeVos] demonstrated a breathtaking dearth of qualifications to lead the Department of Education. From her lack of understanding of and commitment to basic education policy and legal obligations under critical federal civil rights laws, she demonstrated time and again that she was not fit to serve as Secretary of Education."

John B. King Jr. is the incoming president and CEO of The Education Trust and DeVos' predecessor as education secretary under President Obama:

"Throughout the confirmation process, The Education Trust expressed concerns about Betsy DeVos' commitment to fully embracing public education and to using the full range of tools at the Secretary's disposal. ... As the former Secretary of Education, I sincerely hope that Ms. DeVos will work hard to prove these concerns wrong and will lead the Department in a manner that protects fundamental civil rights and promotes opportunity and achievement for all students."

Conflicting views from the Senate

Lamar Alexander, R-Tenn., is the chairman of the Senate committee that handles education and a former secretary of education:

"I championed Betsy DeVos because she will implement the new law fixing No Child Left Behind the way Congress wrote it: to reverse the trend toward a national school board and restore local control of Tennessee's public schools. Under her leadership, there will be no Washington mandates for Common Core, for teacher evaluation, or for vouchers."

" ... she is the most incompetent cabinet-level nominee I have ever seen. Last night, I urged my Republican colleagues to oppose her nomination, because if we cannot set party loyalty aside long enough to perform the essential duty of vetting the President's nominees, then I don't know what we are even doing here."

From a statement by National PTA President Laura Bay:

"National PTA is committed to working collaboratively with Secretary DeVos and the Department of Education to ... advance policies that ensure all children reach their highest potential. Critical progress has been made to improve education, provide educational equity for all children and make sure every child is prepared for long-term success. We cannot go backward."

From a statement by Thomas J. Gentzel, executive director and CEO:

"This is a pivotal time in public education and our nation's school children deserve the best education possible. We must and we can enhance public education by working together to find and implement the best ideas to accomplish this."