Accessibility links
Just What IS A Charter School, Anyway? : NPR Ed The Trump administration has indicated that charter schools are a major part of its education agenda. Many Americans, though, aren't sure how they work. 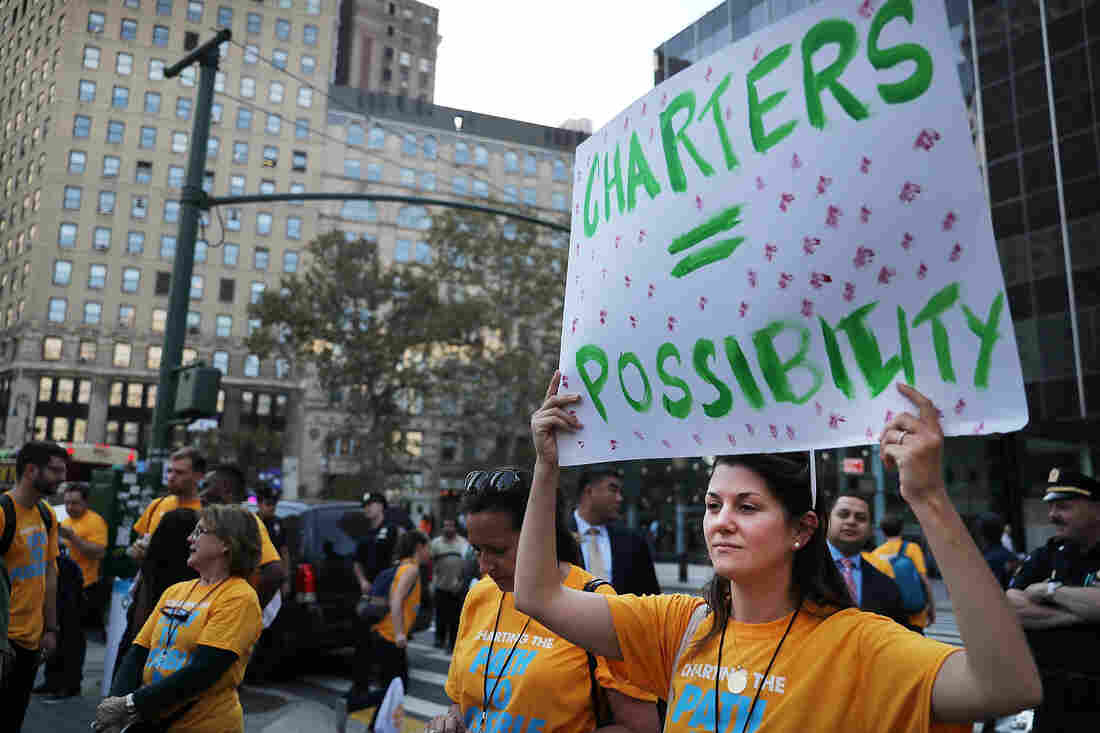 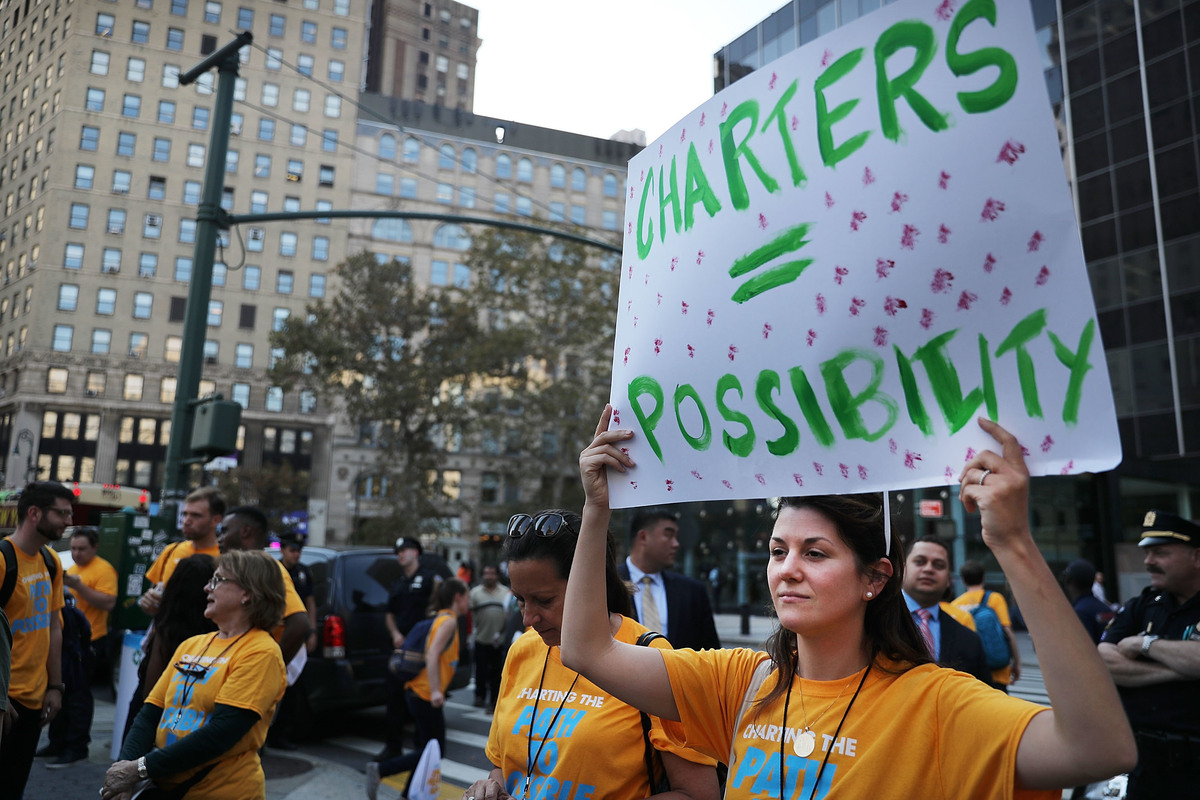 We're all familiar with the term "hidden in plain sight." Well, there may be no better way to describe the nation's 6,900 charter schools.

These publicly-funded, privately-run schools have been around since the first one opened in St. Paul, Minn., in 1992. Today, they enroll about 3.1 million students in 43 states, so you'd think Americans should know quite a bit about them by now. But you'd be wrong.

"Most Americans misunderstand charter schools," was the finding of the 2014 PDK/Gallup poll on public attitudes toward education. The survey found broad support for charters, but also revealed that 48 percent of Americans didn't know charter schools were public. Fifty-seven percent thought they charged tuition. And nearly half thought charters were allowed to teach religion.

Now that the Trump administration has made school choice a cornerstone of its education policy, we thought it would be worth exploring how charter schools work, who runs them, how they're funded and whether they work better than the traditional public schools they're often competing against.

We asked three charter experts to help us out with a survey course. Welcome to Charter Schools 101, your professors are:

Ted Kolderie, a former journalist and senior fellow at the University of Minnesota's Hubert Humphrey School of Public Affairs. He helped create the nation's first charter law in 1991 and helped 25 states design their own.

At DeVos' Senate Hearing, Questions Of Choice, Charters, 'Other Options'

Greg Richmond, president and CEO of the National Association of Charter School Authorizers. NACSA represents people and organizations that approve and oversee charter schools in 43 states.

Nina Rees, head of the National Alliance for Public Charter Schools, an advocacy group that lobbies on behalf of charter schools.

What do we mean by "charter" school?

Kolderie: The term "charter" really refers to the decision by states to turn public education into a two-sector system. One is a traditional school district, centrally managed. The other, charter schools, are independent, not owned by a central school board. Both are public, but they're organized in radically different ways.

People have to understand, chartering laws don't create schools. It is enabling legislation that sets up a process for people to create schools. The charter sector was supposed to encourage innovation — pedagogical laboratories that would push new ways to teach, even if it was disruptive.

The charter sector [operates on] limited contracts. Their renewal is subject to performance. Charters are authorized by [groups] defined in state law. In New Jersey and Massachusetts, for example, the state is the only authorizer. Some states have created separate boards that authorize charters. Authorizers are usually non-profits and include universities but in most cases, local school boards authorize charter schools.

Rees: A local school district does not tell charters when to open or close their doors, what kind of curriculum to use, what company to contract for food or paper. Charters have the freedom to hire teachers without a union contract.

What does an authorizer do?

Can teachers open a charter school? Wasn't that the idea when the concept was first seriously considered in the 1980s?

Kolderie: Yes. The first charter opened in East St. Paul, Minn. It was started by a workers' cooperative organized by teachers. Minnesota may be the only state where a teachers union can authorize charter schools.

But a charter school can be for-profit right? Fifteen percent of the nation's 6,900 charters are for-profit.

Richmond: A charter school can hire a for-profit company to manage its school. Only one out of six charters in the U.S. are run to make money. In Michigan, 80 percent are for profit, more than any other state. Some states, like New York, prohibit charters from contracting with a for-profit management company.

Are charters funded the same way traditional public schools are, with a mix of local, state and federal dollars?

Richmond: In a couple of states, charters don't get local money. But, in most cases, these [three funding sources] are common. Private donors are less common but also important.

The National Alliance for Public Charter Schools says charters get less money. Is that true?

Rees: On average, charters receive 30 percent less per pupil, per year compared to traditional public schools. That gap is due in large part to the fact that charters don't have access to the same funding streams [like school construction bonds] that traditional school systems have to build schools.

Transportation is another issue. [Charters] draw students from all over but we have to provide our own transportation, or parents rely on public transportation, because school districts do not make their buses available to charter schools.

Ted Kolderie, do you agree that charters get 30 percent less money?

Kolderie: Yeah, I've heard that figure. Its cited often by charter advocates. But the method and level of financing charter schools varies widely state to state, from "pretty good" to awfully weak.

Do charters get the same amount of federal aid from IDEA, the Individuals With Disabilities Education Act, and Title I, which targets low income students?

Rees: Technically yes. But its hard to track how the money is distributed. If a charter operates under a school district, the funding gets opaque.

Richmond: Each state has its own laws and regulations for distributing that money to districts and individual schools.

The only federal money that I know of that flows directly to charter schools is "start-up" money from the U.S. Education Department to help charter schools open. That began under president Bill Clinton.

What kind of kids enroll in charter schools and do charters take all comers like traditional public schools?

Rees: Charter schools have to accept all students. If they get more than they have slots for, the school has to conduct a lottery.

Kolderie: Traditional district schools don't take everybody. Superintendents talk as if they do, but they only have to take the children of families who can afford to live in their district. There are all kinds of charters enrolling all kinds of kids. The strongest support for charters has been among parents who had never gone beyond a high school education. That's where the strongest preference remains.

Rees: Charters cannot pick the students they want. They have to accept kids with disabilities and ELLs, English language learners. Right now, charter schools are tilted to serve low-income kids. Over 50 percent [of students in charter schools] are from black and Latino households, mostly in inner cities.

Kolderie: The charter sector is still a public system. It has to be free, open. No tuition, no teaching religion, no picking and choosing kids.

Are states consistent in how they evaluate charter schools and are they held to the same performance standards as traditional public schools?

Richmond: In general, they're evaluated based on test scores, graduation rates, finances — the same as traditional public schools. But there's great inconsistency state-to-state in how well that's done. We need better oversight of charters. Charter supporters don't want a lot of oversight. The good news is that we know what good oversight looks like in terms of balancing autonomy with accountability.

Who is responsible for making sure "bad" charters are shut down? And how much time do they have to show they're doing well?

Rees: Charters, on average get 3-5 years to ramp up. Research indicates that charter schools that start out strong continue to do well and those that start weak do not get better over time. A failing school should be closed immediately or turned over to another charter school operator.

Kolderie: When a charter school is not doing well, if the authorizer fails to act, the state has to step in. Most closures are due to financial reasons and poor management.

What about online charters, or "cyber schools"?

Richmond: Cyber schools have not done a good job for most kids. Many studies have evaluated their performance and I have yet to find one that's shown they're good. ... Taxpayers are paying an enormous amount of money to those operators and kids are being shortchanged.

After 25 Years, What's Next For Charter Schools?

High Test Scores At A Nationally Lauded Charter Network, But At What Cost?