Accessibility links
Some Tax Credit Scholarships Have A Loophole For Wealthy Donors : NPR Ed A program that allows poor students to choose a private school can also enrich the people who fund it. 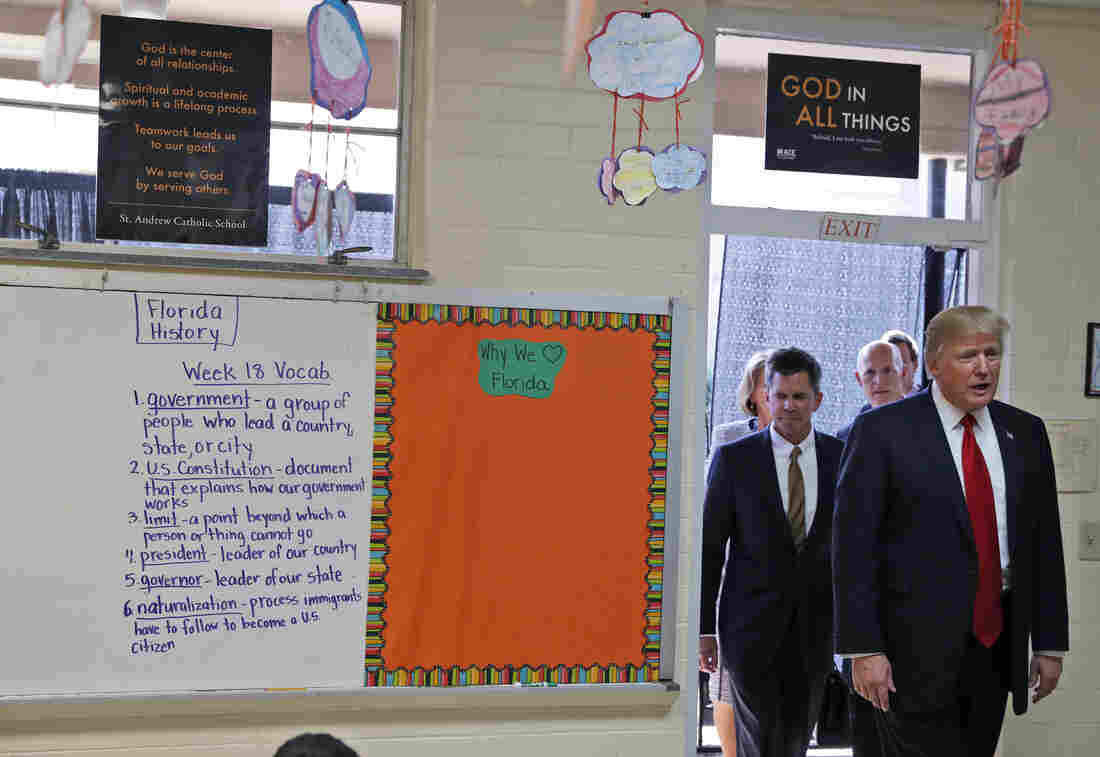 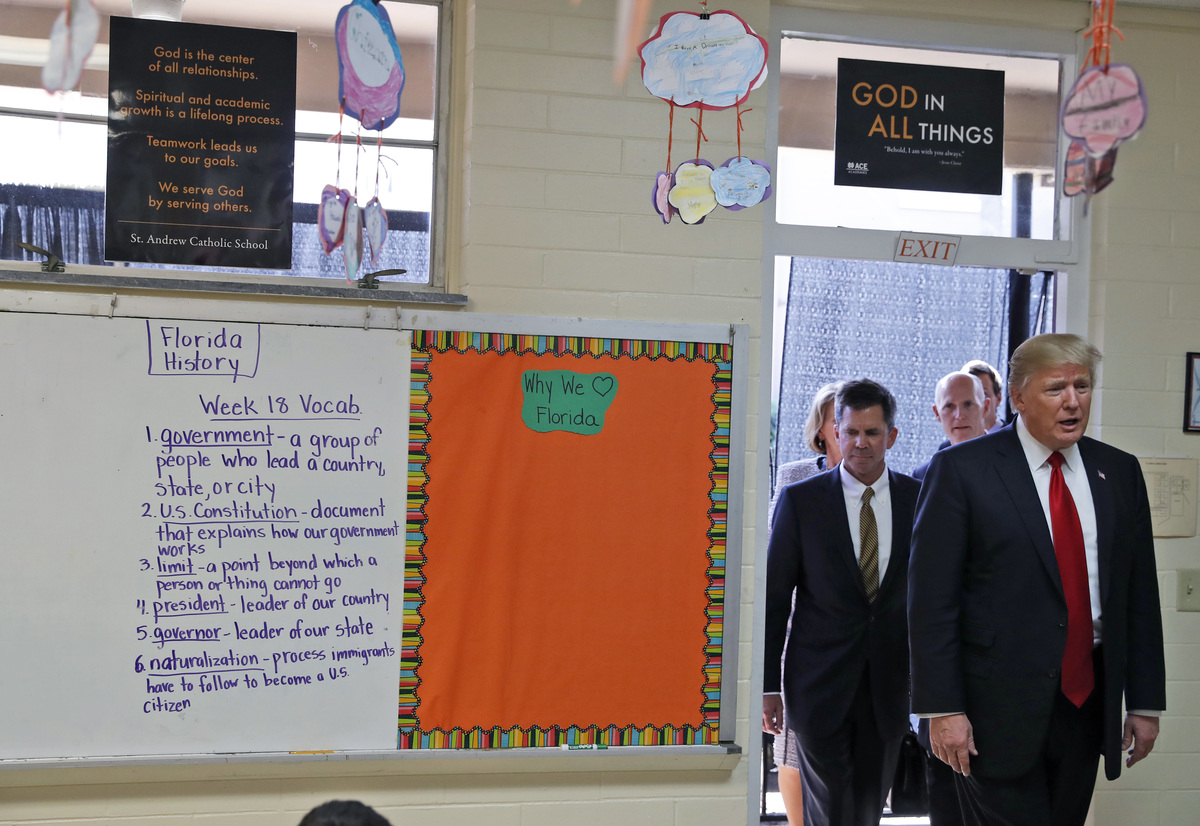 President Trump has indicated several times now that his education agenda may feature a school choice program known as tax credit scholarships. He called it out in his first joint address to Congress last week, and followed that up with his first school visit as president this weekend: to a Catholic school in Florida which accepts several hundred students on the scholarships.

In these programs, sometimes called "neovouchers," people and companies earn tax credits by giving money to nonprofit scholarship funds. Students can use the scholarships to attend private schools, including religious schools. This is important because traditional school vouchers can run afoul of constitutional challenges if they allocate public money to religiously based organizations.

These programs have been growing quickly in the last few years, with a push by groups like the American Federation for Children and the American Legislative Exchange Council. They exist in 17 states and several more are currently considering them.

But as documented by Carl Davis of the Institute on Taxation & Economic Policy, and as advertised by financial advisors and the scholarship organizations themselves, in 10 of these states there is a quirk that allows individuals to turn a profit on their donations.

Here's how it works: Donors to these scholarship funds can offset their state tax liability by 70 to 100 cents for every dollar given. That's already generous compared with many other tax breaks. But then, the donors can turn around and claim a federal charitable tax exemption on the same "donation."

That, says Davis, amounts to up to a 35 percent profit for individuals, depending on their federal tax bracket.

"Frankly, I was surprised," says Davis, who wrote a report on this quirk — what he calls "double-dipping" — last year. His nonpartisan group focuses on the effects of the tax code on low and middle-income families. "I think the IRS has some catching up to do," to close the loophole, he added.

In Pennsylvania, which has the highest allowable donation, the potential profit is in the hundreds of thousands of dollars.

"When you donate, you will receive both a Georgia state tax credit AND a federal charitable deduction," as Georgia's scholarship organization puts it on its web site. "You will end with more money than when you started, and you will be helping students receive a good education."

Virginia's program spells it out as well:

"For the year of the donation, donors may take a credit against Virginia taxes equal to 65 percent of the donation, as well as a deduction against their net income as a charitable donation on both their federal and state income taxes."

The profit opportunity applies only to individuals who pay the alternative minimum tax, Davis says. Most of those individuals earn more than $200,000 per year. This can also include business owners who operate sole proprietorships or partnerships. 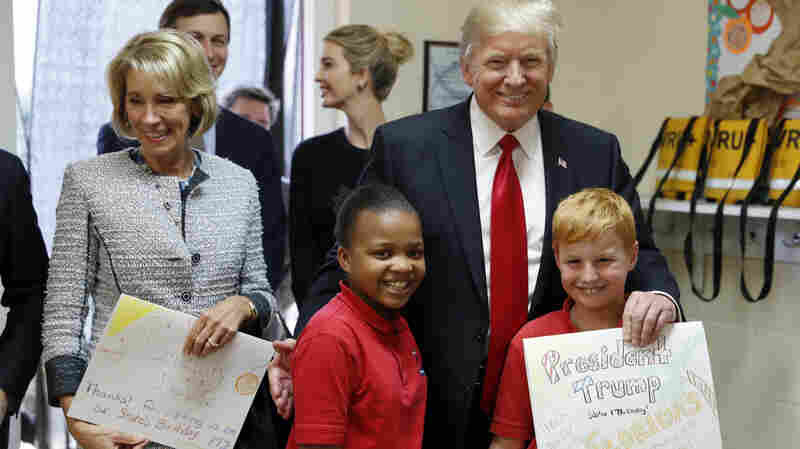 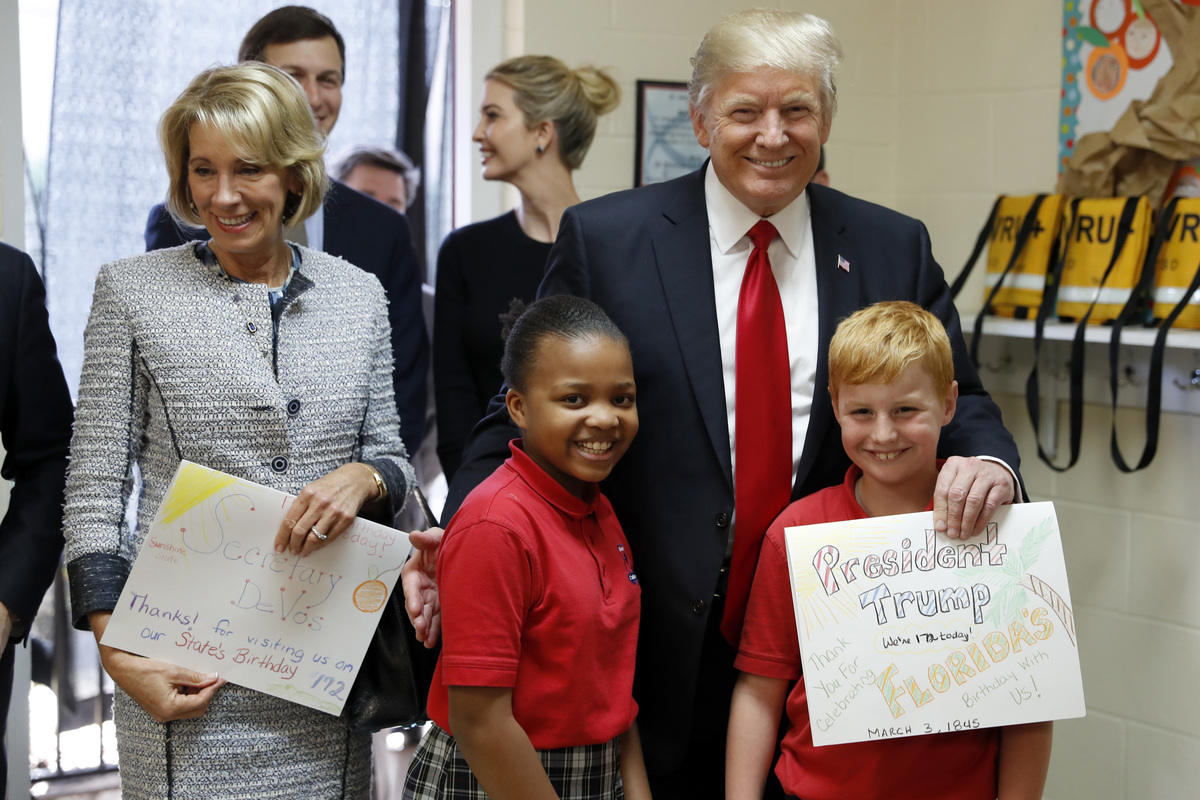 The overall budget impact of tax credit scholarships is a matter of debate. On the one hand, says Davis, they divert more than $1 billion from state budgets, all told. On the other hand, advocates point out that the scholarships tend to cost less per-pupil than states would be spending to educate the same students.

Now that President Trump may be considering expanding the idea at the federal level, would the same opportunity be allowed?

U.S. Rep. Todd Rokita, R-Ind., introduced the "Educational Opportunities Act" last month. It would create a $4,500 credit against federal income tax for contributions to a qualified scholarship-granting organization. His bill would prohibit double benefits at the federal level, or claiming both the federal tax credit and a federal charitable deduction on the same donation.

However, if a federal policy encouraged or required states to adopt or expand their own tax credit scholarship programs, the opportunities for double-dipping could multiply. "If a federal bill was poorly drafted," Davis says, "you could open up these sorts of problems, with taxpayers being able to turn a profit at the public expense."