Accessibility links
The Picture Book Behind The New Movie 'Boss Baby' : NPR Ed Before the new animated film was a box-office hit, it was a beloved children's book. 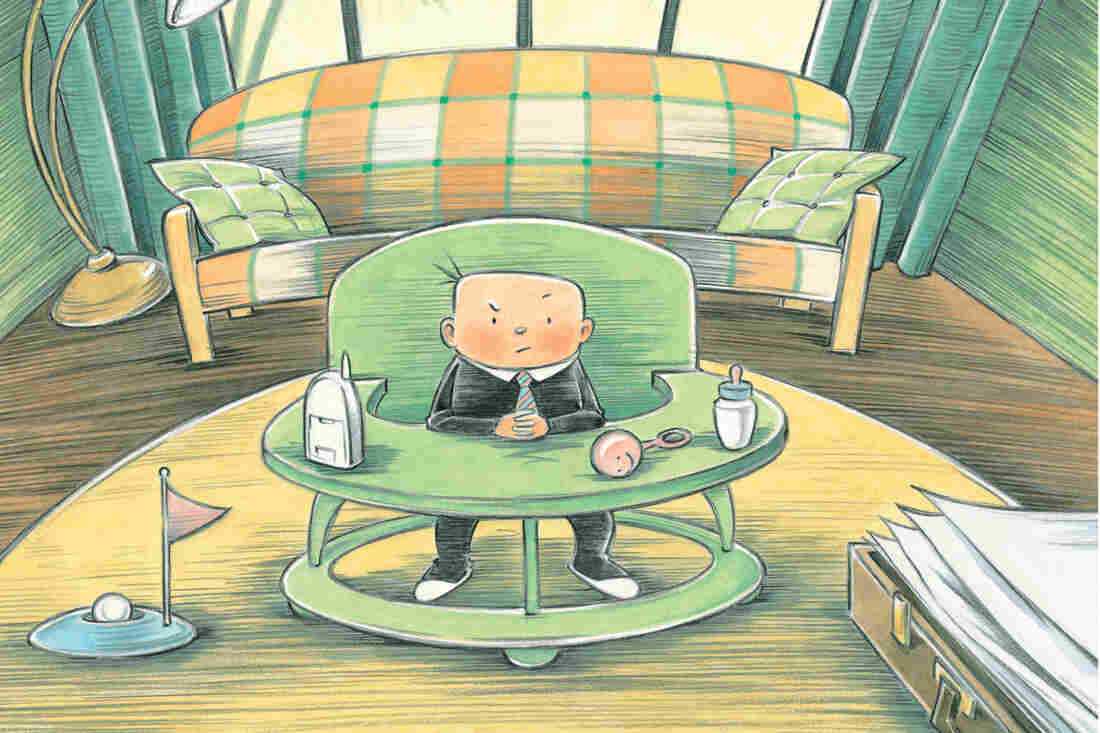 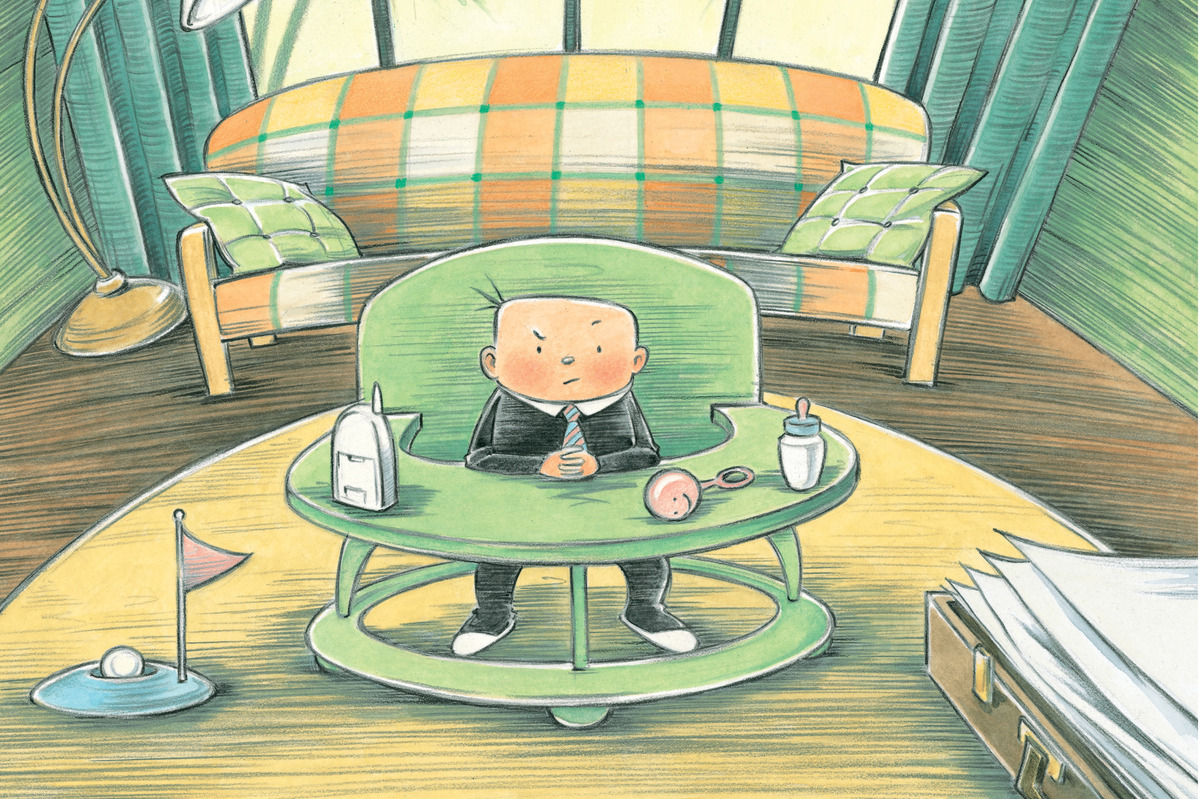 The new animated movie, Boss Baby, was No. 1 at the box office last weekend. But before it was a full-length film, starring the voice of Alec Baldwin, it was a 32-page picture book written by award-winning author and illustrator Marla Frazee.

Frazee is a big name for young readers and their parents — the imagination behind Seven Silly Eaters and All the World. Her illustrations have earned two Caldecott Honors.

NPR Ed spoke with Frazee about the book and the new animated hit it inspired. The story of the Boss Baby is simple, she says:

"It's about a baby who comes into his home and is the boss of everyone — his parents — and he kind of rules the roost, as babies do. He's wearing a suit onesie, and he arrives in a taxi with a briefcase, as babies do. So the taxi pulls up and he's there."

How did you get the idea?

It came from a very funny episode with my youngest son, who was then 15 years old. He really wanted a new kitten, so he got one for Christmas. And this little kitten was sort of creating havoc in our home. This little kitten was pooping underneath the Christmas tree, and on our beds, and in the fireplace.

And my 15-year-old came up to me two weeks after Christmas and said, "I really think we need to contact the cat adoption people because this cat is stressing everybody out. I'm really sorry." And I said, "Well, it's fine. This is nothing. You should see what it was like when you three were babies. We kept you! It'll be fine. We'll learn how to love this cat." Which, of course, we did.

And I sat down and started to really work on this manuscript with his emotions in mind. I was watching my son, as a 15-year-old, coping in the way that new parents cope when a baby comes into the house. And this little creature becomes the boss of you, and you didn't anticipate that would ever be possible. 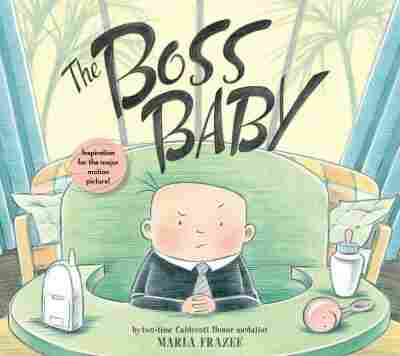 The illustrations in the Boss Baby are very distinct — almost retro. How did you come up with the style?

It was funnier in my mind if he was a white, stereotypical, male boss in the way that the TV shows of my youth showed that sort of character. And when I started to design the book and the look of it, I definitely was thinking of it as being a TV show. In a sort of a midcentury modern context.

I thought maybe the book would be in black and white in the beginning and sort of framed up with an old TV screen.

And as I was thinking of the title page and the front of the book, I was almost imagining that there was a TV jingle or theme song going on while he came in as the main character. So the vibe is definitely from that time period.

From little screen to big screen — not too big of a leap! What was the book-to-movie process like for you? Were you involved?

My involvement is like a parent sitting in the stands at a soccer game watching their kid on the field. I'm such a fan of animation and also have such respect for it. So I don't have any real involvement except as a very enthusiastic parent.

The film is loosely based on your illustrations, but it's gone in a completely different direction from the book.

When you take a 32-page picture book and turn it into a 90-minute film, there's going to be, like, so much backstory. One of the things that I love about picture books is that you have to be so spare, because of the short length of them. You are trying to get as much emotion and story into that very spare form. Because the movie is a completely different form, I knew that there was going to be some kind of a story. As I've watched it develop, I think it's amazing how tight that story has become. So I think it's fantastical and funny, and I find it delightful.

I'm thrilled that the se-up — the way the boss arrives — is very similar to the way I drew that happening. When I first saw that part, I was with my agent, and we were in one of the studios at DreamWorks. And afterward, I kept calling him and saying, 'Was that a dream? Did that really happen?' It just felt like I wanted to keep pinching myself. I really couldn't hardly believe it.

I mean, the amount of creativity and passion and expertise of the people who are involved just blows my mind. You know, I cannot believe it.

How did you come to be an author and illustrator?

From the time I was a little kid, this is what I said I wanted to do. When I was in second grade, my best friend said to me, 'Well, I know you want to be a children's book illustrator, so we should get started.'

And she wrote a book. She's like, 'You know, what are you waiting for?' So she wrote a story, and I illustrated it. And then we kind of presented it to our teachers, and it was a book that was in our school library.

And so I felt as if I had arrived, you know, then it took a while until my second published book.

What inspired you as a kid?

I was about 8 years old when I saw Where The Wild Things Are for the first time in our public library. And it just rocked my world. I could not believe how Maurice Sendak had Max's room change from a bedroom into a forest with three page turns. It was magical to me.

Another thing I put into that same category is watching The Wizard of Oz, when they open the door into Munchkin Land. It's like Technicolor. It was just like, wow. And this was magic to me. I wanted to learn how to do that, and so, from that point on, that's what I said I always wanted to do.