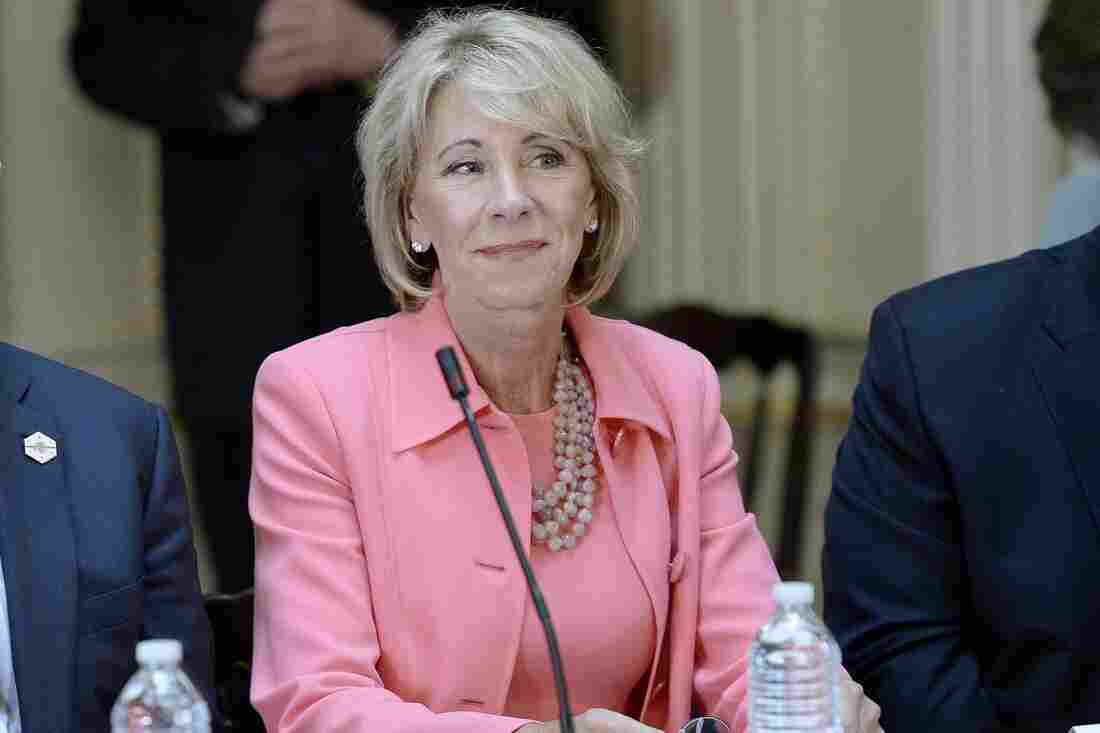 Greetings and welcome to our weekly roundup of education news from Washington and around the country:

U.S. Secretary of Education Betsy DeVos made her first official staff announcement this week, with 10 names.

Among them: Josh Venable, will serve as DeVos' chief of staff. He worked on the presidential campaign of former Florida Gov. Jeb Bush, and is an advocate of both school choice and the Common Core.

Robert Eitel, who was a lawyer in the department under President George W. Bush and also worked for the owner of a for-profit college, will serve as senior counsel to the secretary.

Candice Jackson will be Deputy Assistant Secretary in the Office for Civil Rights and Acting Assistant Secretary. Her brief at OCR will include prosecuting campuses for violations of Title IX, including sexual assault cases. Jackson is the author of a book focusing on women who have accused Bill Clinton of sexual harassment and abuse. She has limited experience in civil rights law. Pro Publica reports that Jackson has said she experienced past discrimination because she is white and has denounced race-based preferences.

Ebony Lee, another veteran of the Bush administration who has also worked for the Bill & Melinda Gates Foundation, will be deputy chief of staff for policy.

Student loan repayment is managed in part by for-profit loan servicers. In her letter, DeVos cited the need to limit the cost to taxpayers of loan servicing. The Obama-era guidance had instead emphasized protection for borrowers.

This may be good news for Navient, the largest student loan servicer. As we noted last week, the federal Consumer Financial Protection Bureau in January sued Navient, alleging that it "illegally cheated borrowers" out of their rights and their money — as much as $4 billion — through patterns of deception and misapplying payments.

In case you missed it, DeVos is receiving full, 24/7 protective security from the U.S. Marshals Service.

Most every White House cabinet official gets some level of protection, of course. But often it's door-to-door and not a round-the-clock detail, let alone from active duty federal law enforcement agents.

"This is unique," Marshals Service spokeswoman Nikki Credic-Barrett tells us. "The Attorney General felt that there was a need for her to be provided with a protective detail."

Credic-Barrett declined to say how many Marshals are protecting DeVos or the nature of the threat, only that "the detail is commensurate with the existing threat" and based on the service's "requirements, experience and methodology."

The extra money for security comes as President Trump's proposed budget contains deep cuts to the Education department. The Marshals Service says its contract with the Department of Education will cost taxpayers $7.78 million, from mid-February through Sept. 30, or about $1 million a month.

Credic-Barrett says the Marshals Service has not protected a cabinet official since the head of the Office of National Drug Control Policy, better known as the "Drug Czar," held cabinet rank. That ended 8 years ago.

Protesters showed up at many appearances by President Trump's cabinet officials, including DeVos, during the confirmation process. The only known security "incident" for DeVos since she took office was a February visit to a Washington, D.C., public school where several protesters shouted "shame, shame!" and temporarily blocked her and an aide from entering.

Scott Pruitt, the head of the Environmental Protection Agency, has also asked for additional round-the-clock security. Pruitt is facing criticism for backing a 31 percent slice to the agency's budget, including research for climate change, among other deep cuts.

New York's new budget includes tuition-free public college for students from families making up to $125,000 annually when the program is fully phased in.

The plan is part of a national trend, with statewide programs now in place in Rhode Island, Tennessee and Oregon. Here's a national map.

However, some critics argued that the New York program is insufficiently targeted toward the neediest students. For one thing, tuition accounts for only half the cost of attendance. Community college students, in particular, struggle with books, fees, housing, food, and in some cases childcare costs.

And free textbooks too

Less widely noted in the New York budget was an $8 million appropriation for what are called "open educational resources" for the State University of New York system (SUNY) and the City University of New York, or CUNY. Basically, OER are copyright-free textbooks and materials, often in electronic formats. Because they don't have a commercial license, open resources can be reproduced and shared at near-zero cost.

Faculty can also modify existing resources to suit their needs and re-share the results. SUNY has been investing in this kind of open learning resource since 2012.

David Wiley, a pioneer of open educational resources, is the founder of Lumen Learning, which is a vendor partner for SUNY in this project. He tells NPR Ed that based on previous research and experience, "I expect to see New York students save more than twice," the $8 million, "in the very first year of the funding and, simultaneously, expect an increase in course-completion rates where OER is adopted."