Accessibility links
Finding Teachable Moments In The March For Science : NPR Ed Thousands of people will participate in Saturday's March for Science. We contacted three experts on teaching and climate change to ask how the event — and its aftermath — can help engage young people. 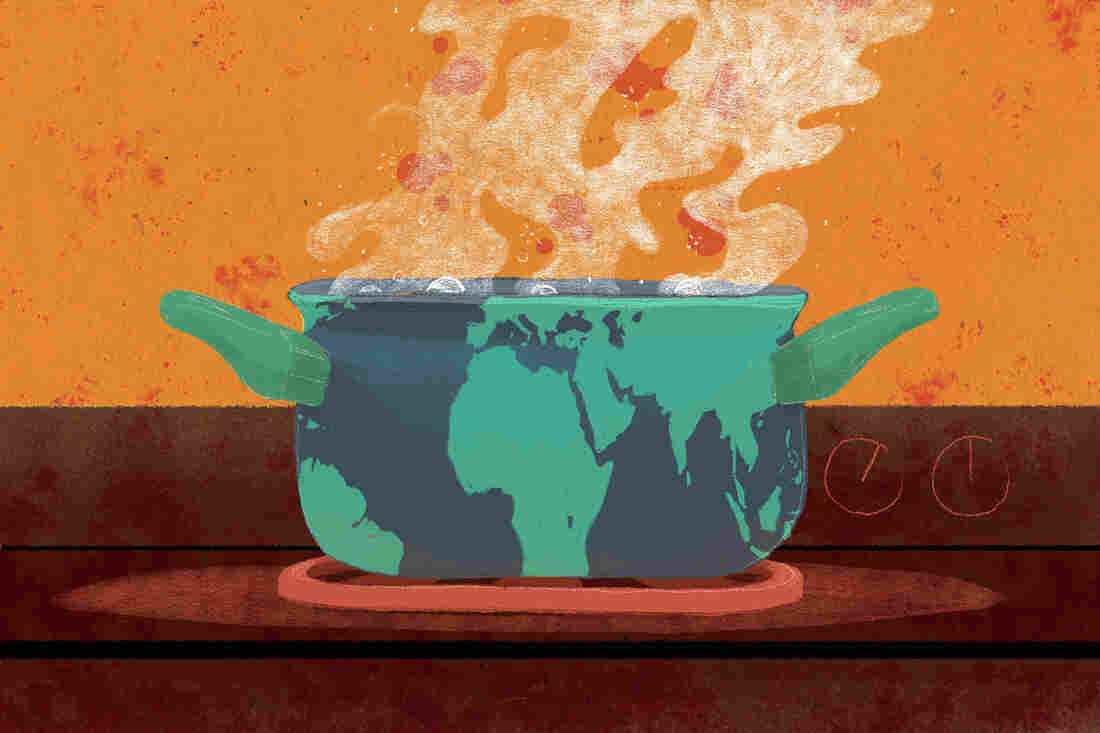 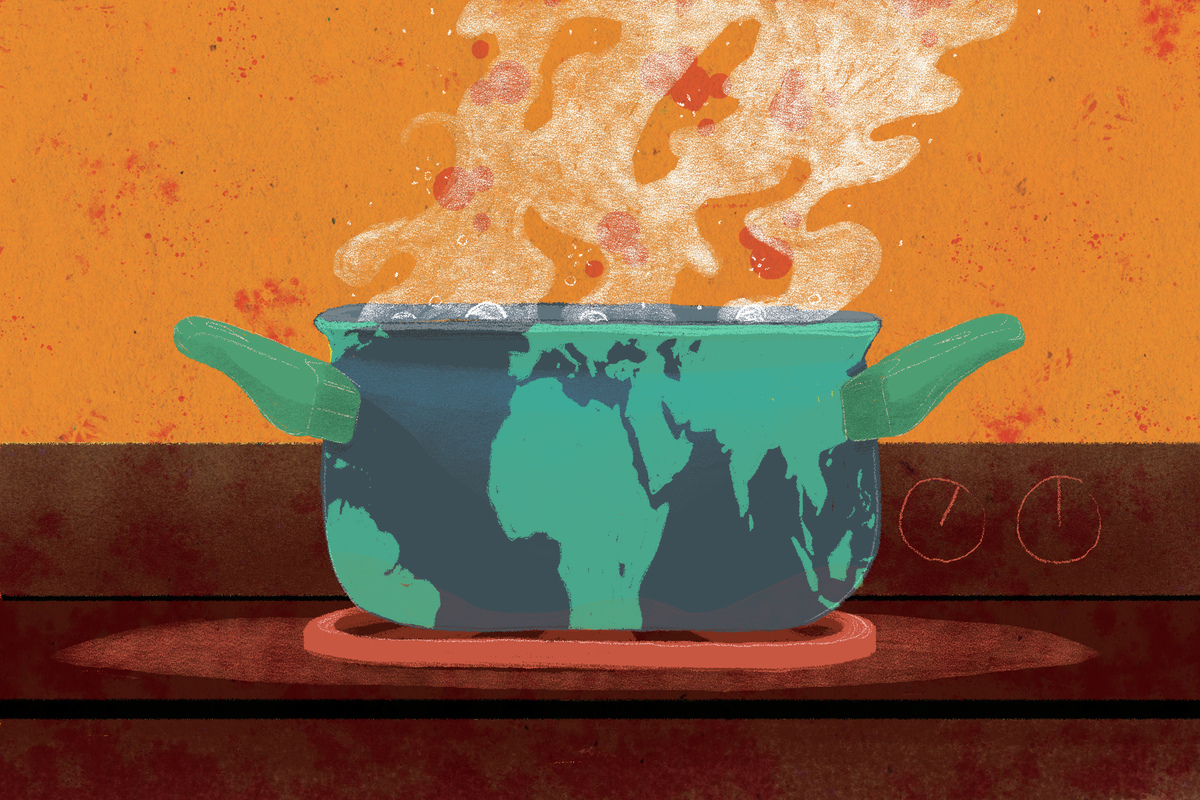 Organizers of Saturday's nationwide March for Science have some pretty lofty goals: supporting science "as a pillar of human freedom and prosperity." Promoting "evidence-based policies in the public interest." Oh, and don't forget highlighting "the very real role that science plays in each of our lives and the need to respect and encourage research that gives us insight into the world."

Whoa, that's a lot of exalted ground to cover with one cardboard sign!

But long after those signs and slogans are put away, educators will continue the fun, hard slog of helping students understand key issues, like global warming, the science behind it and what students can do to help.

I reached out to three veteran experts on climate science education — Scott Denning, Frank Niepold and Rebecca Anderson — who'll be working on the issue during and after this weekend's marches. I wanted to hear more about their work and challenges, especially at a time when the head of the EPA has questioned the human role in global warming and President Trump has proposed slashing climate change funding and pulling back many environmental regulations.

First up: Scott Denning. By day, Denning teaches atmospheric science at Colorado State University. He's also the former editor of the Journal of Climate and the founding science chair of the North American Carbon Program. He has produced lots of peer-reviewed scholarly papers on the topic.

And, for more than a decade, Denning has helped educate audiences of all ages about the realities of climate change.

Why do you think it's important to teach K-12 students and others about climate change and the science behind it?

Climate change and climate, in general, is a fantastic, cross-cutting subject that helps kids, students, adults connect between physics and chemistry and biology and economics and social stuff. It's a wonderful application of almost everything that you teach.

Certainly, Common Core and the Next Generation Science Standards have lots of opportunity to do applied learning and cross-cutting issues like that. I think it's not adding something to your curriculum. It's actually dead on with your curricular priorities. Secondly, this is something that will grow to be a bigger and bigger problem until we stop making it bigger. Then it won't go away. Kids will wind up working with this issue as they grow up, and throughout their careers and their lives, in virtually any field that they choose to go into.

What do you like about working with younger students, K-12, instead of teaching at the college level and advising grad students?

Sometimes I feel like I kind of have that grandparent's advantage that people talk about. You go in and you play with the kid and it's really fun, and then when you're done they go back to their folks and I don't have to bring them home. Yeah, it's been fantastic working with K-12. Absolutely delightful.

I've spent almost my entire career working with graduate students and that's fun, too. Brilliant 20-somethings who are passionate and dedicated and work really hard — there's nothing wrong with that. But going into their [K-12] classrooms, doing hands-on experiments, watching them light up, watching them learn by doing, play with little demos, do their own little experiments — it's a blast. I can see why middle school and high school teachers enjoy their jobs.

What are the big challenges in reaching younger students?

Teaching science to kids involves more than just content delivery. There's a whole engagement piece and trying to get kids to learn from doing hands-on science experimental stuff. I keep going back to this metaphor of putting a pot of water on the stove because it's direct, in-your-face experience of how the world works, how the universe works. A lot of the science behind global warming, believe it or not, is just classic thermodynamics. You don't need relativity, and quantum physics, and all that to understand this. It's very straightforward. By the time students are in high school, they're supposed to understand basic stuff about heat and radiation. That is in curricula.

Linking climate change to earth science, that's maybe more challenging and it's maybe stuff that teachers didn't get themselves when they were in college, so they've got a professional development obligation there to try to pick up some of this material that's developed since they were in higher ed.

The other thing, of course, is that, especially in rural communities, you may find teachers that encounter this political polarization: There may be pushback, there may be resistance to teaching this material, just as there is in biology when you teach evolution. That can be very challenging.

Are you going to take part in one of the March for Science events this weekend?

I probably will. I've been thinking about it. You know, there really aren't very many climate scientists in the world. We're one of the smallest minorities. There are only a few thousand of us in the whole world. We don't have any special right to influence the politics. On the other hand, we don't have any less right to political opinion or public speech than anybody else. I don't give up my rights as an American because I'm a scientist.

[The National Oceanic and Atmospheric Administration plays a leading role in helping folks understand and prepare for climate variability and change. Niepold also works extensively in partnerships with other government agencies through the U.S. Global Change Research Program. He also helps support schools districts, museums, aquaria, colleges and universities with programs and curricula about climate science.]

Is there an age sweet spot when you're talking to K-12 schools and museums and other groups in teaching the basics of climate science?

I wouldn't say there's one sweet spot, there's a series of them. I used to teach middle school science and I used to teach high school, and I've worked extensively with colleges and universities. I would say middle school is really where you're starting to get into the richness of the issues and you have enough of the conceptual understanding of these complex systems that you can get into.

I mean, one of the best questions I was ever asked was by a seventh-grader who said, "If I understand climate change right, are all the jobs then going to change?" They want to know: 'What am I preparing my academic time to focus on? What's important?' That's what's meaningful to them.

There was until recently a sense that core aspects of the science of climate change, including the human role in CO2 proliferation and rising temperatures, was largely a settled issue. Now in the Trump administration, that doesn't seem to be the case. Doesn't that make your education outreach work much harder?

I don't know if it makes my job harder.

I don't think anyone is going to have an outsized role over another, and so one of the things we're focused on is helping our students be able to navigate information, build knowledge, create stronger critical thinking and reasoning skills and then be able to look at evidence and statements, and look at bias and navigate it all.

The new head of the EPA, Scott Pruitt, has said repeatedly that he doesn't think human-created carbon dioxide is a major contributor to global warming. Do comments like that have a chilling effect?

I mean, that's one claim, right? Students, learners are surrounded by tons of claims every day. News articles, statements, interviews. And I think that what we're concerned and focused on is really giving them the skills to look at all of that information and draw their own conclusions. We're not pre-wiring which conclusions to draw.

What do you tell teachers and administrators and others who might say: 'You know, we're busy with test prep, Common Core and lots of other things we have to cover and there's only so much time in the day. Why should we commit time to climate science?'

The key thing is that we're preparing our future leaders and future citizens to be prepared for the opportunities and challenges that are coming, and that resonates with anybody who's an educator — serving young students. That's why we're in education, and this is a perfect example of where you can do that, in a very relevant, meaningful way.

What in your climate science presentations have you found really hits home with students?

We really focus on empowering young people within a framework of justice and optimism to really try to shift the national discourse on climate to affect public opinion and policy. We do teach the science and impacts of climate change, but we also really focus on how young people can start taking action right away.

Give examples of some of the ways in which high school students can take action in their own teenage lives?

That can be small lifestyle changes, or applying to join a fellowship program that can put them on a pathway for a lifetime of leadership on climate.

The first thing that we do is ask all students who see our program to pick a "dot." And dot stands for Do One Thing to fight climate change. When they pick their dot we ask them to text it to us while we're right there in person during the assembly. One, they're making a commitment right then and there to do one small thing, sort of the first step toward more actions down the road. And by texting it into us they're joining our youth network.

How does ACE try to approach the topic so it's accessible to everyone, not just those who geek out on science?

The assembly we bring is animated and we are narrating that animation synced up with what's happening on the screen. We also bring in a lot of humor and a lot pop culture references that make it fun and entertaining. When it comes down to the science, we are good at explaining straightforward: Here's the greenhouse effect, how it works and how we as humans by burning fossil fuels and living our daily lives have the unintended consequence of producing CO2. All that extra CO2 is cranking up the dial on the earth's thermostat.

And one way that we frame it is that climate change reduces young people's choices in terms of what is open to them in the future.

Is the global warming skepticism coming out of the White House having an impact on the ground on how you approach your educational outreach?

If anything I think it's really galvanized the young people we work with as well as our teacher network. They understand the science and see it as an assault on what they're teaching in their classrooms. So we've actually seen a real uptick in engagement from our network over the last few months as teachers are doubling down on teaching the science that they know is factual. A lot teachers are telling us 'our students know what's up and my administration is fully behind me when I teach that climate change is caused by people.'

But we are hearing stories of teachers getting pushback from outside the school. Kids in their classroom saying, "Oh, I saw this on the news or heard this at home," and they're having to respond to that.