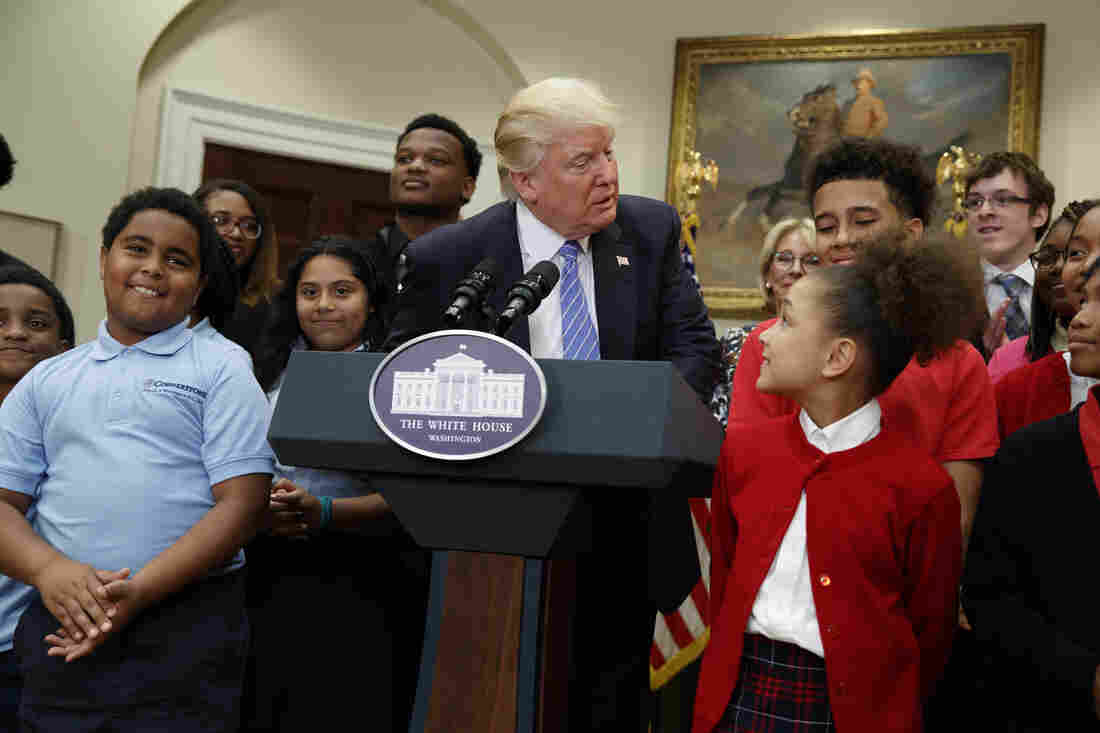 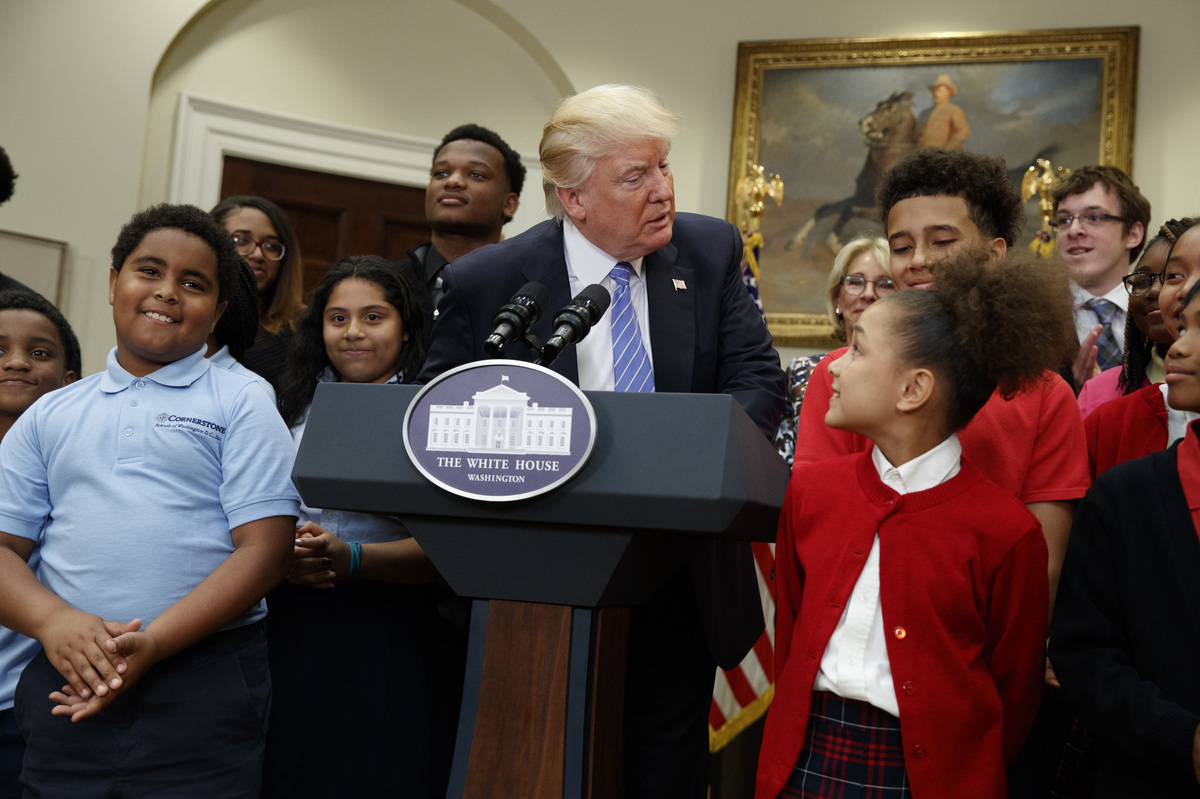 President Trump speaks during a school choice event at the White House.

The rest of the country may be talking about health care this week, but you must be a die-hard education fan. NPR Ed has just the weekly news roundup you need. And, actually, we do have a health care note.

The Affordable Care Act repeal that passed the House this week would cut Medicaid by 25 percent, and also cap funding for children specifically. The New York Times reports that public school districts receive $4 billion of Medicaid reimbursements annually, or about 1 percent of the pie. Most of that money goes to professionals such as speech, physical and behavior therapists who help special education students. Under the bill, states would no longer be required to recognize schools as eligible Medicaid providers or pay them for those services, which schools will still be required by law to provide.

We previously reported that President Trump's "skinny budget" proposal had significant cuts to education. But a bipartisan agreement struck this week is a different story. The interim spending bill to keep the government operating through the end of September includes a fraction-of-a-percent budget cut to the education department, as reported by Education Week. Title I, which provides federal funds to high-poverty schools, gets a bump, as do state grants for special ed. And a new block grant program known as Title IV of the Every Student Succeeds Act is funded at $400 million. This grant can pay for technology, enriching and broadening school curricula, and programs to make students safer and healthier.

The nation's high school graduation rate has hit a new high, 83 percent, says a new report by Johns Hopkins University. But black and Latino students from low-incomes families are still the least likely to graduate. The dropout rate is nearly 30 percent for low-income African-Americans and nearly 20 percent for low-income Latinos. English language learners and students with disabilities continue to lag as well. State by state, New Mexico has the lowest graduation rate, at 68.6 percent, and Iowa tops the list at 90 percent. The report's authors also called out rising skepticism about graduation rates, with discrepancies in record-keeping and the growth of alternative high schools that may not have the same academic standards. As NPR Ed's previous reporting has shown, there are a lot of paths to increasing a state's graduation rate: good, bad and ambiguous.

Indiana's flagship public university has acquired the for-profit Kaplan University for $1, in the largest-ever deal of its kind. As we reported,

Kaplan U's 32,000 students will transition to a new entity, nicknamed "New U" for now, that will be part of the public Purdue system, yet financially self-sustaining.

Steven Schultz, Purdue legal counsel, told NPR Ed: "Purdue views this opportunity as an extension of its land-grant mission to address an unmet need." While Robert Shireman, a critic of for-profit education with The Century Foundation, called the move "an existential threat to public education." Purdue's Faculty Senate may hold the latter view; on Thursday they voted to ask the university's board of trustees to rescind the deal.

Call it the Friday Night Lights effect. As the Associated Press reported, Texas has rejected a school voucher plan yet again, with conservative lawmakers speaking out in favor of public schools as the anchors especially of small rural communities. It's one of seven Republican states that have blocked vouchers.

A yearlong investigation by the AP uncovered widespread reports of sexual assaults of students by other students over a four-year period: 17,000 from fall 2011 to spring 2015. The attacks were concentrated in high schools and junior highs, but nearly every grade was affected, including elementary schools.

The AP's investigative report shows that, contrary to many media depictions, assaults by schoolmates outnumber those by teachers.

That figure comes from state education and federal crime data, which may be incomplete. Some states simply don't track sexual assaults, "and those that do vary widely in how they classify and catalog sexual violence. A number of academic estimates range sharply higher."

As we've reported, a handful of districts are pushing for intervention and prevention of sexual violence much earlier than college.

Just days earlier, a federal study of the program found negative effects on student performance. Recent evaluations of voucher programs in Louisiana and Indiana have found the same. The one positive finding in the DC evaluation was that families thought the private schools were safer.

"This is what winning for young children and kids from all over the country looks like," Trump said.