Accessibility links
At Yale, Protests Mark A Fight To Recognize Union For Grad Students : NPR Ed The dispute pits graduate student teachers who voted to unionize against an administration that refuses to bargain and disputes the election's validity. Yale says it's awaiting a federal review. 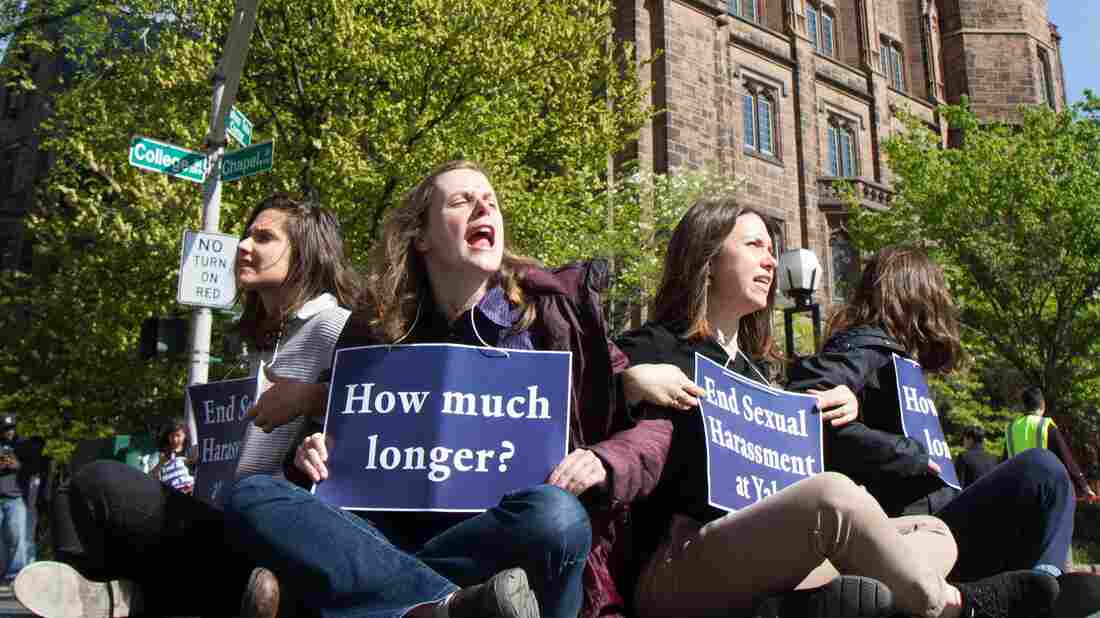 Yale graduate student instructors (from left) Kelly Goodman, Robin Canavan and Gwen Prowse block an intersection in downtown New Haven, Conn., on May 11, to protest what they say is the university's inaction on sexual harassment. Local 33-Unite Here hide caption 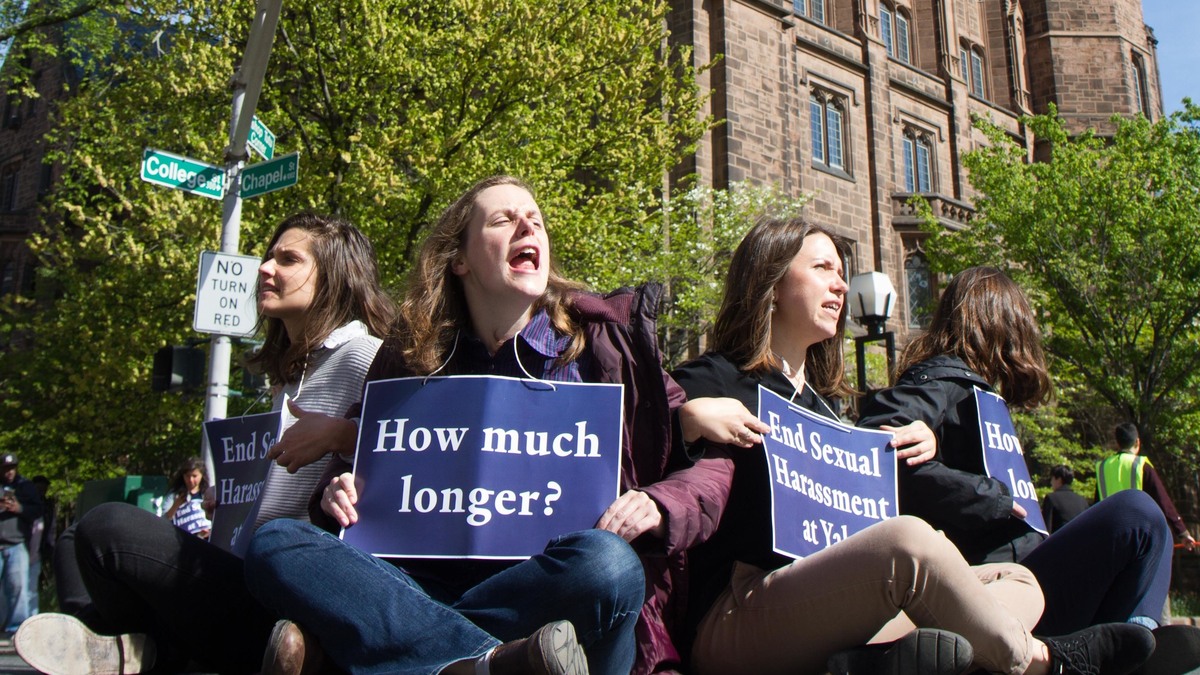 Yale graduate student instructors (from left) Kelly Goodman, Robin Canavan and Gwen Prowse block an intersection in downtown New Haven, Conn., on May 11, to protest what they say is the university's inaction on sexual harassment.

At Yale University's commencement ceremony last month, hundreds of graduating students and their supporters staged a labor protest. The dispute pits graduate student teachers who voted to form a union in February against a Yale administration that refuses to bargain and disputes the election's validity.

Yale is asking the National Labor Relations Board to review the Local 33-Unite Here union's organizing tactics. The university also intends to ask the federal labor regulator to reconsider its policy ruling last year that graduate student instructors at private universities are employees and therefore eligible to organize.

The response on New Haven, Conn., campus has been very divisive; a rotating group of students held a month-long hunger strike to protest the university administration. Yale's stance has divided students and faculty, and both sides have alleged the use of unfair tactics.

Political science Ph.D. candidate Aaron Greenberg, chair of the Local 33 union, says although classes have ended for the school year, the graduate students intend to continue their fight to bring the university to the table to negotiate over questions of pay, sexual harassment policies, health care, child care and other benefits.

"I had every expectation that the administration would sit down and begin negotiating with us" following the February elections, in which eight of the nine academic departments that held votes approved the union, Greenberg says. 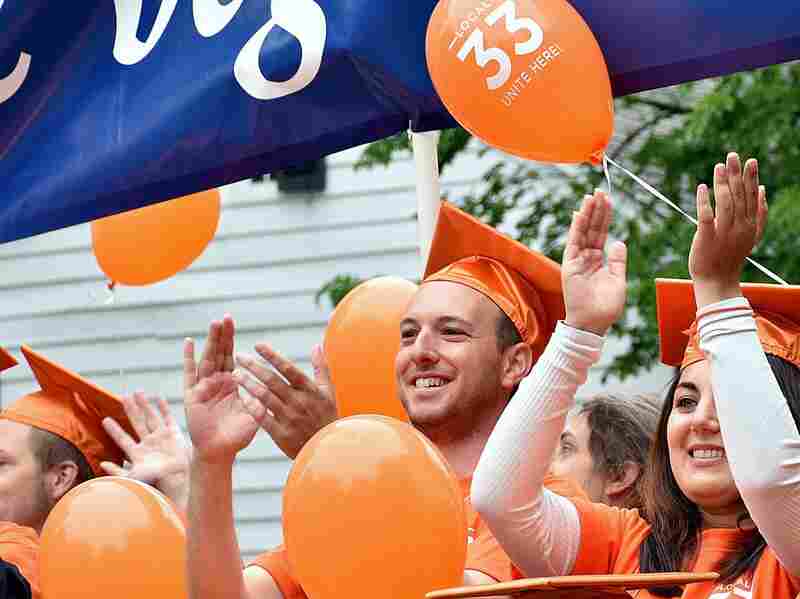 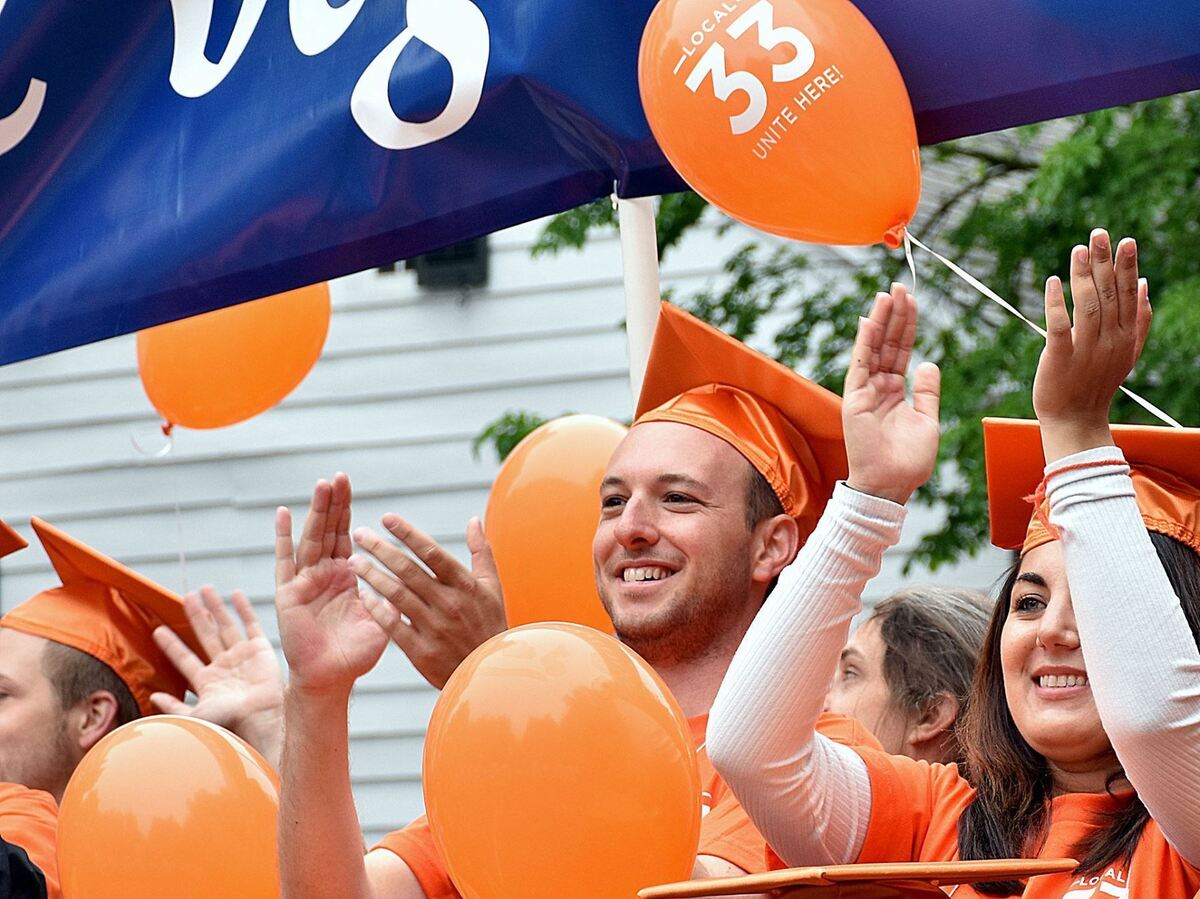 Aaron Greenberg (center), chair of Local 33-Unite Here, and other union activists participate in a demonstration at the Yale commencement on May 22.

When that didn't happen, he says, "we decided we needed a different kind of action. I fasted for 13 1/2 days."

Julia Powers, a comparative literature Ph.D. candidate, says she also fasted, for a week, because she does not believe that Yale is addressing what she calls a pervasive culture of sexual harassment on its campuses, documented in a 2015 report by the Association of American Universities.

"There's a sexual predator in my department, who was put in a position of supervision over me and my work," she says. The toxic environment forced some of her fellow students to leave the program, Powers says. "For me, it became unfortunately necessary to take drastic action."

The university says a panel of faculty and students review all sexual harassment claims filed, and it carries out punishment, but that the process is, by law, private.

Both at Yale and at Columbia University, where the administration is in a similar standoff with students, the central issue is whether graduate student instructors should be considered employees with a right to organize.

The interpretation of the law today stands with the unionizing students; they can be considered employees with the right to collectively bargain. But that has not remained consistent over the years, so both sides have laid claim to legal precedent.

Yale and other universities point out that for most of labor history, students were not legally employees. That changed with an NLRB decision in 2000, although the board later reversed itself two more times — in 2004 and again last year — under different White House administrations.

"I was a graduate student; the last thing I thought of myself as was an employee," she says. "You learn a huge amount from teaching. It's like the way you really learn your craft is by trying to teach it to someone else."

Cooley says there are many factors that make Yale's case unique. One of them is that, since 2000, the university has provided all of its doctoral graduate students at least $30,000 in annual stipend, full tuition, and health benefits. That cost, the university says, amounts to between $374,000 and $445,000 per student over six years, and enables the students to graduate debt-free.

Cooley says Yale decided to dispute the unionization vote because of the way it was structured: separate elections were held for each academic department. And, she says, because only students who were teaching assistants were permitted to vote, only about 9 percent of the 2,600 doctoral students in the Graduate School voted.

She says that set up a system where the university might have to individually bargain with each department. That makes no sense, Cooley says, because students often work across departments, and receive the same financial packages and benefits.

Cooley defends Yale's refusal to bargain with the union as the university awaits federal review of the election.

As is the case with many agencies in Washington, however, the NLRB has not fully staffed up with the new Trump administration. Two Republican seats on the five-member board remain vacant, and appointments have been slow amid congressional investigations into Russia's role in the 2016 U.S. elections.

Once the board is fully staffed, however, Robert Battista, former Republican chair of the NLRB from 2002 to 2007, says he expects that under Trump, the policy on graduate students as employees will switch again — this time in favor of universities.

"You shouldn't be overturning precedent willy-nilly," Battista says. But he says boards led by Democrats have used the wrong legal reasoning in deciding to allow students to unionize.

Greenberg, the grad student union activist, says Yale is exploiting the partisan swing to the right, and that by appealing to federal regulators, the university is undermining his efforts and those of many other graduate students at other campuses.

"What they do want is for Donald Trump to appoint anti-labor judges to the NLRB that will overturn our rights to organize as well as the rights of thousands of other workers across the country," he says.

If there is a middle ground between the Yale administration and her fellow students, musicology Ph.D. candidate Laura Brown occupies it.

"I am very pro-labor, I come from a union family," she says.

Brown does not, however, support the Local 33. She points out that Yale covers all of its Ph.D. students' full tuition and stipends, an atypical privilege.

"Yale's package for its graduate students is very, very good. That's not the case at other schools, necessarily," Brown says.

She does not think Yale students need a union. But she doesn't want to see Yale pushing for a national policy change that would bar students at other schools from making their own choice.