Accessibility links
Summer Reading For The College-Bound : NPR Ed Lots of colleges have common reading programs; some are just for freshmen, and for others, the entire campus or local community joins in. What are college kids reading this summer? Here's a sampling. 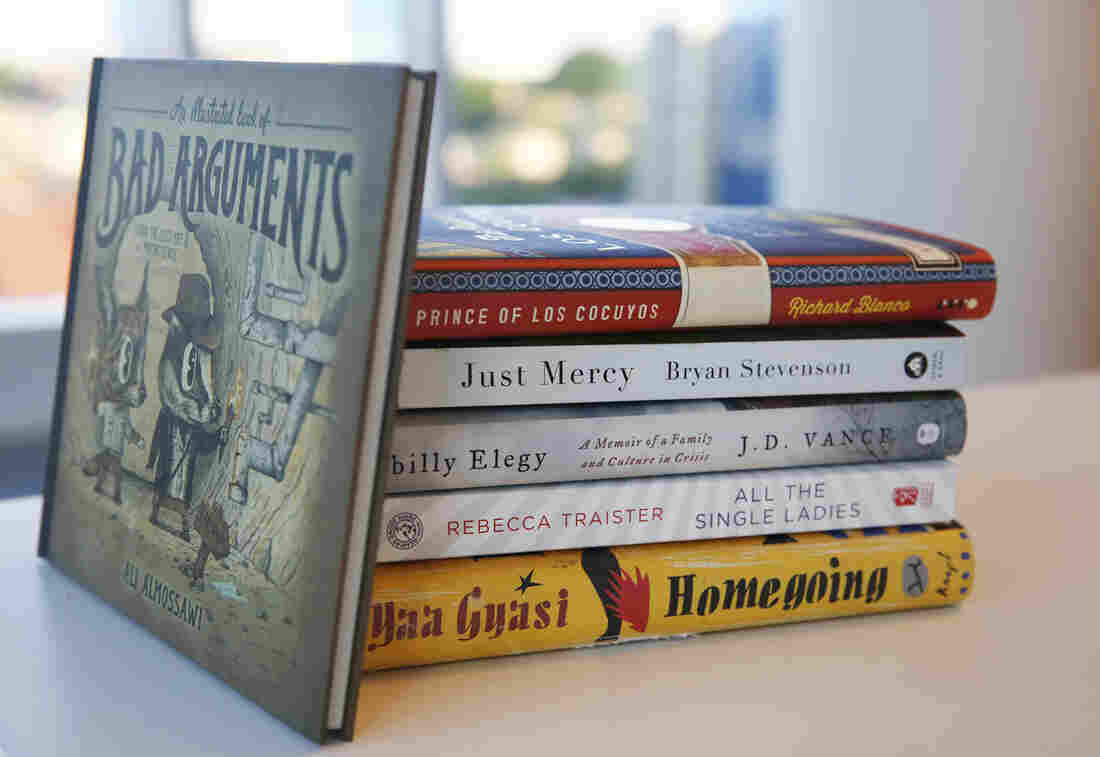 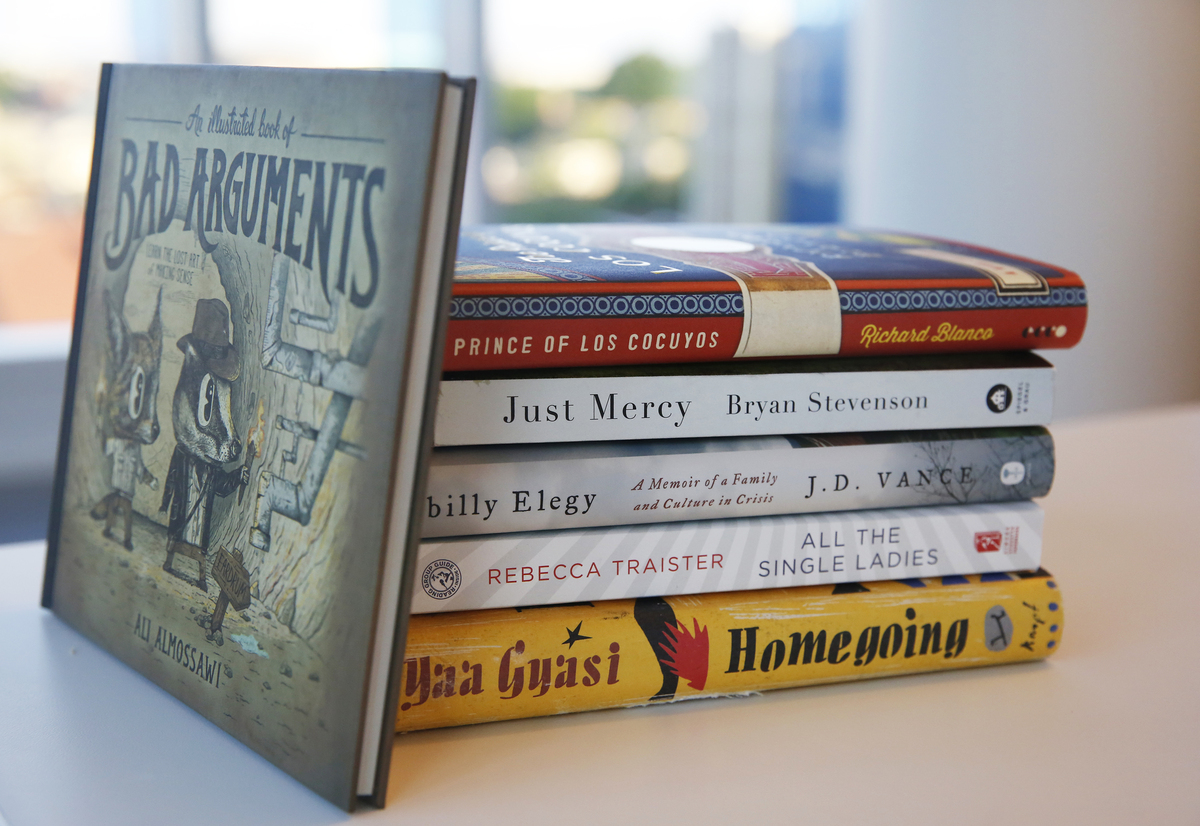 Madison Catrett, 18, grew up in south Georgia — in a town about 30 miles from Tallahassee. Her high school was mostly white, Christian, and conservative — a place "where education is not as important as football," says Catrett.

She's bound for Duke University in the fall — and she's a little nervous to go somewhere new, somewhere so different from her hometown.

Luckily, she and other Duke freshmen have a built-in conversation starter: the reading they've all been assigned — Richard Blanco's Prince of Los Cocuyos.

"I'm excited about it. It gives us something extra to talk about — common ground we might not otherwise have," says Catrett.

And that's what many colleges and universities across the country are going for. Schools often call it their common reading program; some are just for freshmen, and for others, the entire campus or local community joins in.

Most "common reads" are contemporary nonfiction, with three-quarters published between 2010 and present, according to a report from the National Association of Scholars that examines choices offered at 348 schools in the U.S.

What The College Kids Are Reading

The NAS has been putting out this report since 2010 — and they haven't been too jazzed about the selections. The report labels the majority of titles "progressive," "parochial," and "mediocre," promoting "activism" and fitting a "narrow, predictable genre."

Not surprising, the report's author praises schools that opted for the unconventional (or classical) — like Florida College, which in 2016 assigned Pericles' Funeral Oration (431 BC).

Last year, just three books made up 15 percent of all common reading assignments: Bryan Stevenson's Just Mercy: A Story of Justice and Redemption, Ta-Nehisi Coates's Between the World and Me, and Wes Moore's The Other Wes Moore: One Name, Two Fates.

What does the summer of 2017 have in store for college students? Here's a sampling.

Hillbilly Elegy: A Memoir of a Family and Culture in Crisis

The University of Wisconsin, Madison

J.D. Vance, whose family hails from the hills of Kentucky, grew up in the Rust Belt of Ohio. His memoir, projected to be one of the most popular summer reads of 2017, details the poverty, drug use, and isolation that plague low-income, white communities.

All the Single Ladies: Unmarried Women and the Rise of an Independent Nation

This Michigan school chose Rebecca Traister's New York Times Bestseller for the Class of 2021. In America, single adult women now outnumber married adult women, according to the U.S. Census. In All the Single Ladies, Traister looks at how marriage delay or abstention impacts women both professionally and personally. She pulls from interviews with more than 100 women, as well as historical research and her own experience.

The Prince of Los Cocuyos: A Miami Childhood

In his memoir, poet Richard Blanco talks about growing up in a family of Cuban immigrants.

Blanco read his poem, "One Day" at Barack Obama's second inauguration, becoming not only the youngest inaugural poet in history, but also the first Latino, the first immigrant and the first openly gay poet to take the stand.

This National Book Award Winner, framed as a father's letter to his son, confronts the realities of being black in America. Toni Morrison said of Coates's work: "The language of Between the World and Me, like Coates's journey, is visceral, eloquent, and beautifully redemptive. And its examination of the hazards and hopes of black male life is as profound as it is revelatory. This is required reading." In 2016, Between the World and Me was the second most popular required reading for college kids.

Born a Crime: Stories from a South African Childhood

This private, Roman Catholic college in Montana selected Trevor Noah's memoir for their common read. Noah, who took over the Daily Show after Jon Stewart, was born in 1984 in apartheid South Africa to a white father and a black mother. In his memoir, Noah finds humor even as he maneuvers a precarious racial landscape. "I think it set me up for where I am now in life," Noah told NPR's Renee Montagne. "But I always say to people, I think I was a comedian before I knew that comedy as a line of work existed. So I was just doing it without getting paid. And then luckily I made up for that."

An Illustrated Book of Bad Arguments

by Ali Almossawi and Alejandro Giraldo

The community college in Knoxville, Tennessee, chose this book as part of a project to "teach people about the field of critical thinking." In this adult picture book, Almossawi ushers logic into the age of internet arguments.

The Boys In The Boat: Nine Americans and Their Epic Quest for Gold at the 1936 Berlin Olympics

Daniel James Brown tells the story of the University of Washington rowing team that took the gold medal at Hitler's 1936 Berlin Olympics. The university, about an hour south of Salt Lake City, also offers students the option to read Christopher Marlowe's Doctor Faustus — making the school one of just a handful of colleges offering a classical book choice.

Carlos Lozada of the Washington Post called Jan-Wener Müller's book "the most useful work to comprehend Trump's appeal." In the book, Müller, a professor of politics at Princeton, defines the concept of populism—as well as a few popular misconceptions. In September, Müller will lead a discussion of the book with the freshmen class.

Yaa Gyasi's sweeping first novel spans three centuries in Ghana, tracing the generational trauma of the slave trade—focusing on the Middle Passage, in which Africans were packed onto ships bound for the West Indies. "Nothing in history disappears," the author said. "It has an effect on every generation that comes after." Gyasi, born in Ghana and raised in Alabama, visits Connecticut College's campus in the fall.

And if you want to listen instead ...

We've been publishing a list of what college freshman are reading for the last three years. See last year's list here — and because books are timeless — check out our list from 2015 here.