Accessibility links
Why 18 States Are Suing Education Secretary Betsy DeVos : NPR Ed Plus other education news: College enrollment is on the decline, school district leaders take a stand against the Senate health care bill, and interest rates on student loans are going up. 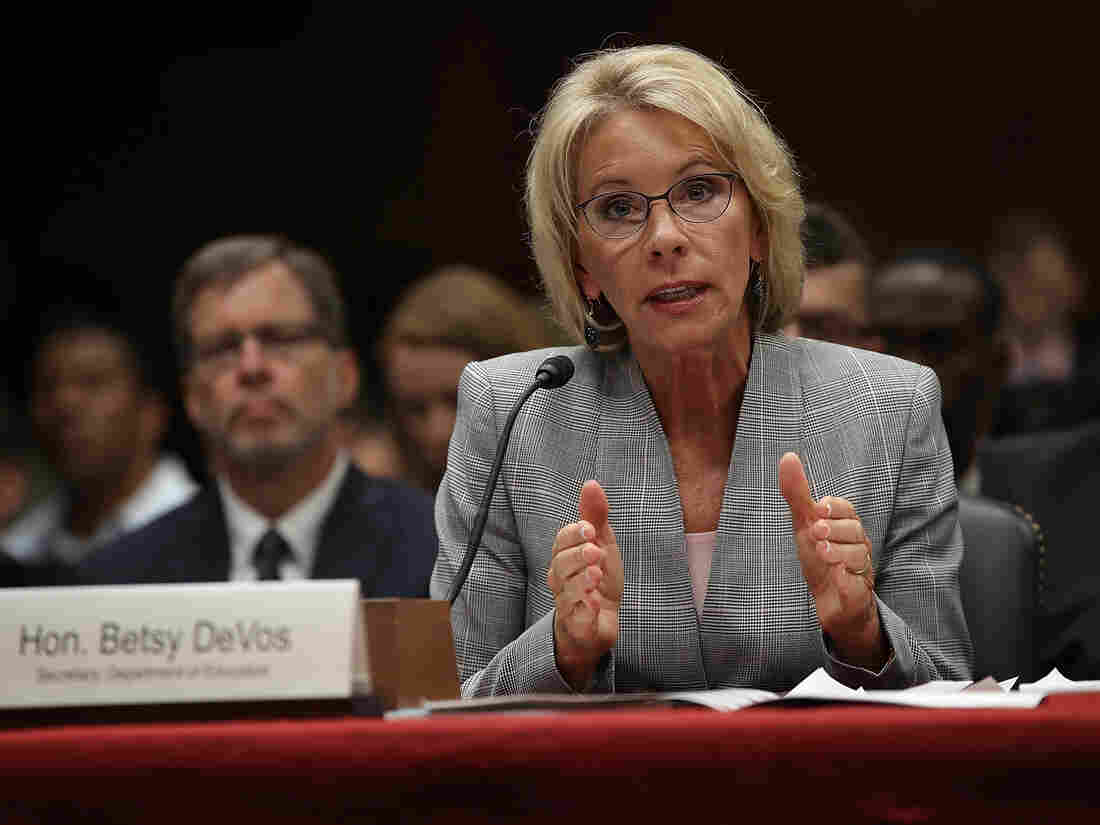 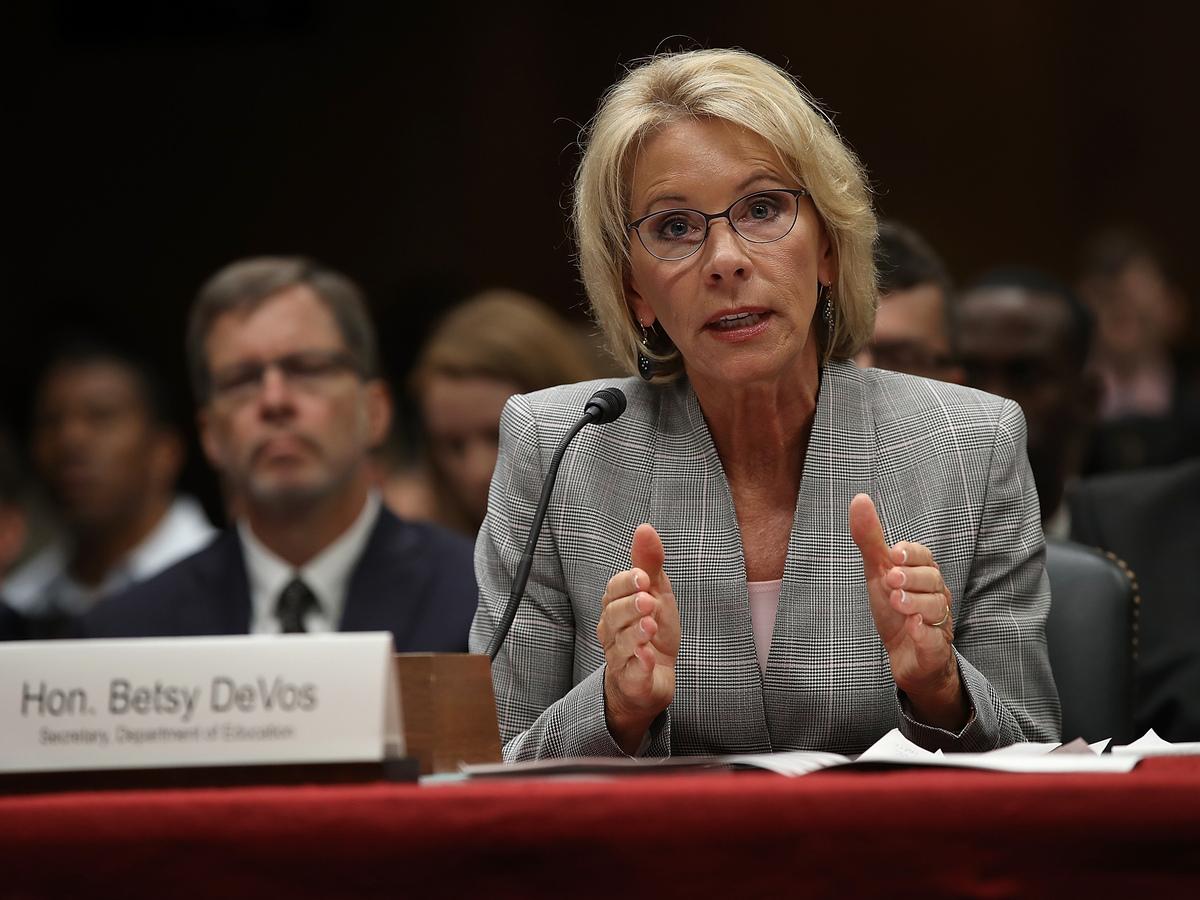 Hello and welcome to another edition of our weekly roundup of education news!

Department of Education sued by coalition of states

The attorneys general of 18 states and the District of Columbia are suing the U.S. Department of Education over a rule to protect student loan borrowers that was supposed to go into effect July 1. Education Secretary Betsy DeVos had announced a "reset" of the rule, known as "borrower defense to repayment," on June 14.

The issue is students' obligations to repay loans when their colleges are found to have committed fraud, misled students or otherwise violated state laws. In July 2014, Corinthian, a for-profit chain of colleges with 70,000 students at more than 100 campuses, ceased operations under a regulatory crackdown. ITT Tech, another for-profit with nearly 40,000 students, shut down in 2016.

Faced with so many students collectively on the hook for millions of dollars in loans from defunct institutions accused of fraud, the Obama administration took up the task of clarifying and simplifying "borrower defense," a rule that long had been on the books.

After two years of negotiations, the final rule was announced at the end of October. It allowed for automatic relief when large numbers of students were affected by a college shutdown. It required colleges under regulatory scrutiny to put up collateral to share the cost of making students whole in the event of a shutdown. And it banned schools from making students sign arbitration agreements waiving their rights to a class action lawsuit in case of misconduct.

Now, all of that is on pause. In her announcement of the "regulatory reset" last month, DeVos said, "last year's rule-making effort missed an opportunity to get it right. The result is a muddled process that is unfair to students and schools, and puts taxpayers on the hook for significant costs." She said, however, that 16,000 pending borrower defense claims will continue to be processed.

The lawsuit alleges the department violated federal law by suddenly and unilaterally axing the rule without allowing stakeholders to weigh in again.

"These rules served as critical protections against predatory for-profit schools," New York State Attorney General Eric Schneiderman said in a statement. "Yet the Trump Administration continues to work against New York's students —instead allying themselves with unscrupulous actors in the higher education industry."

U.S. Department of Education press secretary Liz Hill told NPR that the suit is "ideologically driven." She referred to a separate lawsuit seeking to stop borrower defense from taking effect, this one filed by a trade group that represents for-profit colleges in California. "The suit makes serious and credible charges that the borrower-defense regulations exceed the statutory authority conferred on the Department." And she added, "The borrower-defense regulations suffer from substantive and procedural flaws."

Want to graduate in Chicago? You'll need to know where you're going next

The nation's third-largest public school system will require every student to have a job, internship, apprenticeship, college acceptance or military enlistment in order to graduate from high school.

The rule takes effect in 2020, but critics say the financially strapped district does not have the resources needed to counsel students toward achieving these goals. Meanwhile, the state of Illinois has slashed appropriations to higher education over the past five years by 70 percent.

Superintendents speak out against the health care bill

School leaders, including some in Republican strongholds, are becoming "an unexpected and forceful voice" in opposition to the Senate bill to repeal the Affordable Care Act, Politico reported this week.

The Senate bill would make deep cuts to Medicaid. As we've reported, public school districts receive $4 billion in annual Medicaid reimbursements. This money goes to basic health care for poor students as well as many services for special education.

The national school superintendents' association is organizing what it estimates could be thousands of calls and letters.

College enrollment on the decline

The Hechinger Report notes that the number of college students has dropped by over 2 million, or nearly 10 percent, in just five years. There is a demographic downturn in the number of 18- to 24-year-olds, while older students have been drawn back into the workforce by an improving economy. The unprecedented shift has left colleges, especially many private colleges, which tend to charge more tuition, scrambling.

On July 1, federal student loans became more expensive. Undergraduate loans taken out in the next 12 months will cost 4.45 percent, up from 3.76 percent. Graduate direct subsidized Stafford loans went from 5.31 percent to 6 percent, while PLUS loans are up to 7 percent from 6.31 percent.