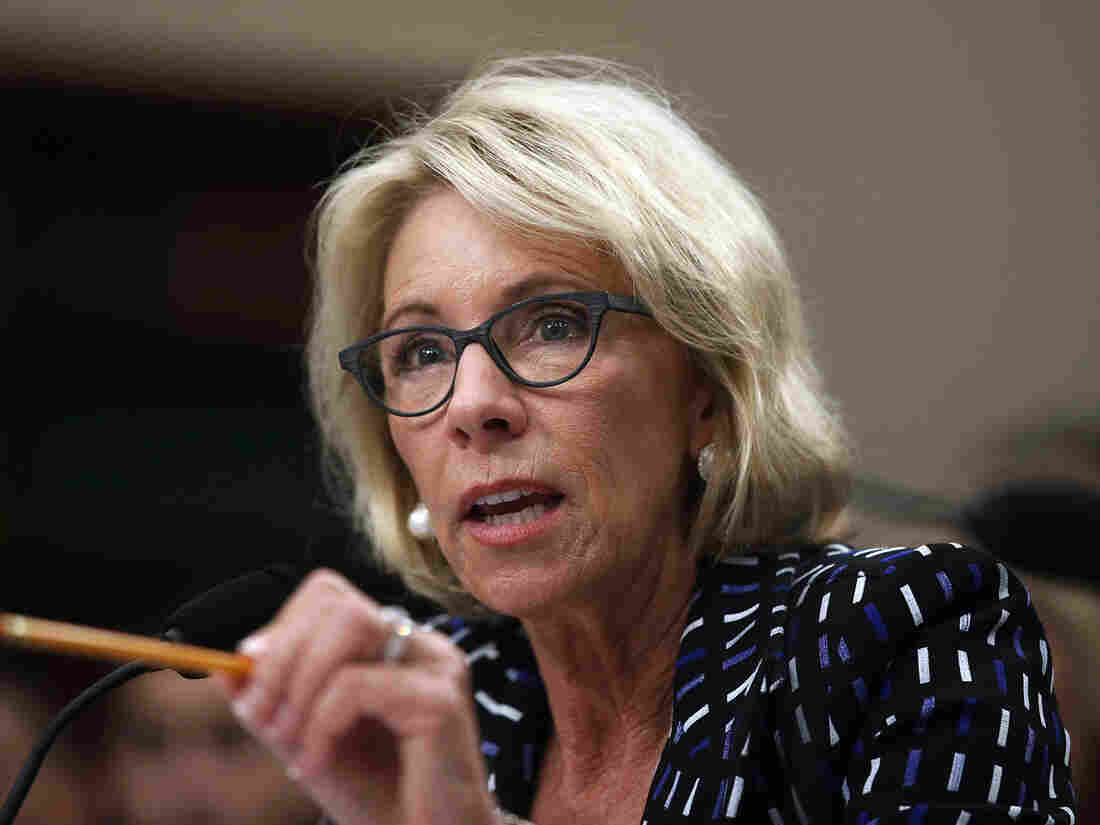 Secretary of Education Betsy DeVos testifies during a hearing before the Labor, Health and Human Services, Education and Related Agencies Subcommittee of the House Appropriations Committee May 24, 2017 on Capitol Hill in Washington, D.C. Alex Wong/Getty Images hide caption 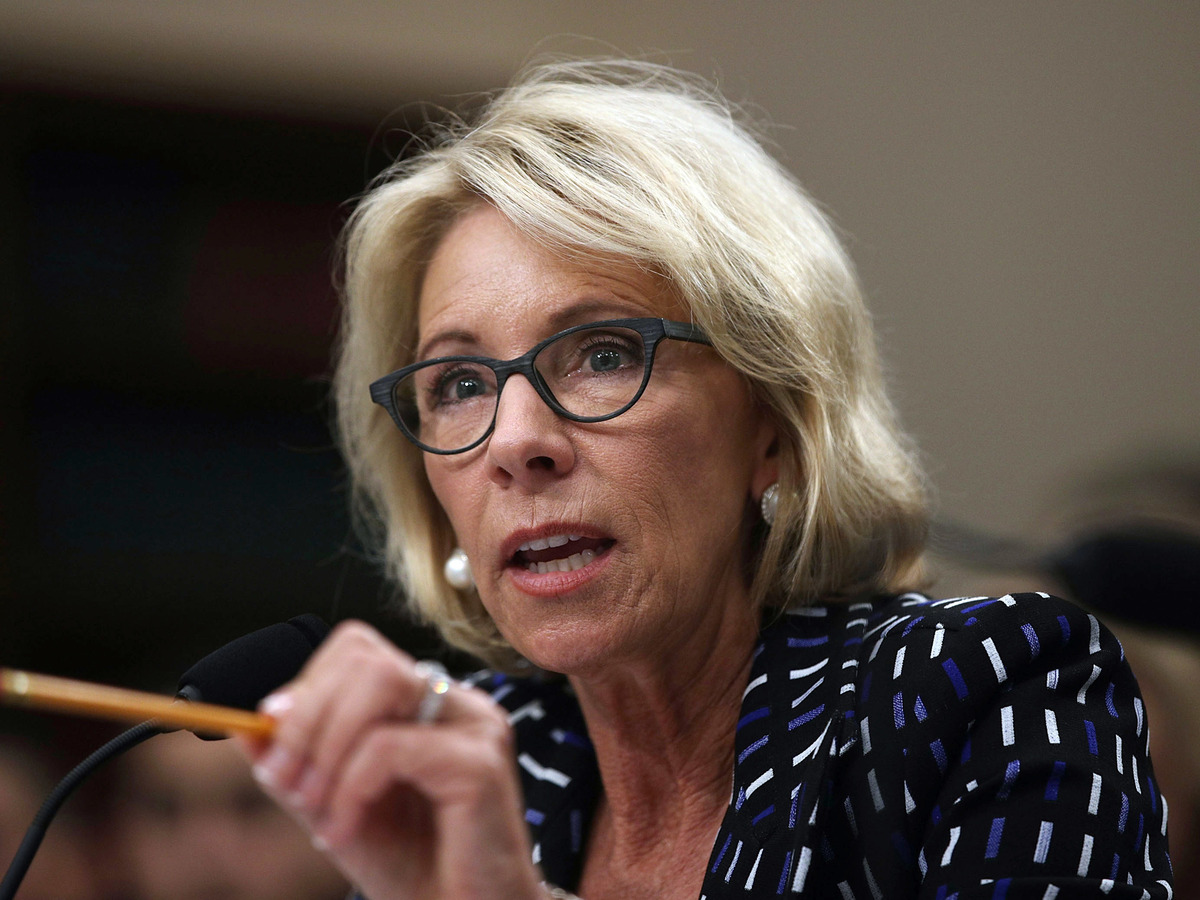 Secretary of Education Betsy DeVos testifies during a hearing before the Labor, Health and Human Services, Education and Related Agencies Subcommittee of the House Appropriations Committee May 24, 2017 on Capitol Hill in Washington, D.C.

Hello! No shortage of education headlines even in the height of summer for our weekly roundup.

Education Secretary Betsy DeVos has indicated that she will loosen Obama-era guidance and practices on the department's pursuit of campus sexual assault cases. She met Thursday with survivors' advocates and feminist groups, as well as three so-called "men's rights" groups, to advise her on this process, drawing criticism and concern from the survivors and advocates.

As Slate reported, one of these, the National Coalition for Men, has published the personal information of women who have accused men of rape, and its leader has labeled women the instigators of domestic violence. The second, SAVE: Stop Abusive and Violent Environments has lobbied against domestic violence protections. And Families Advocating for Campus Equality takes the position that current campus sexual assault guidelines are skewed against the accused.

Candice Jackson, whom DeVos appointed as the top enforcer of sexual assault cases at the Department of Education, seemed to agree with that position in remarks to The New York Times on Wednesday. Campus rape "accusations — 90 percent of them — fall into the category of 'we were both drunk,' " she said in part. She apologized later that same day, calling the remarks "flippant."

In a rare press availability after Thursday's meeting, DeVos told reporters that "lives have been ruined" by allegations of sexual assault.

Last month, DeVos walked back two Obama-era regulations aimed at protecting student borrowers. Beginning with two public hearings this week, in Washington, D.C., and in Dallas, the Education Department has reopened the "negotiated regulation" process, or "neg reg" as insiders call it. As we reported:

In fall 2015, at the height of the Black Lives Matter movement, Missouri's flagship institution, known as Mizzou, became a flashpoint. It's located in Columbia, two hours from Ferguson, where teenager Michael Brown was killed by police in 2014. Mizzou students camped out on the quad, protesting perceived bigotry and indifference on the part of the administration. Both the university's president and the chancellor of the system were ultimately forced out.

Two years later, The New York Times reported this week, freshman enrollment at the campus is down 35 percent since 2015, and the new president acknowledges that backlash is a factor.

The drop in freshman enrollment among black students in last year's class was down 42 percent, twice that of white students.

Nathan Willett, the president of the student government, responded to the Times story in an op-ed in the The Kansas City Star. He noted that the university is experiencing severe budget cuts as well as a downturn in the college-aged population, both of which affect enrollment. On the positive side, he said, there is a new vice chancellor for inclusion, diversity and equity, and student engagement, including in campus government, is at an all-time high.

Money magazine has released a new set of college rankings. As in previous years, the personal finance publication rates colleges by return on investment: that is, the average paychecks of graduates compared with affordability, including tuition and financial aid. They also attempt to get at the sticky issue of value-added: How much of the success of graduates at a particular school is due to the characteristics they come in the door with, such as grades, family education background or SAT scores, and how much can be credited to the college itself?

The top of Money's list doesn't look too different from rankings produced by other methodologies: Princeton is No. 1. However, the City University of New York's Baruch College, lauded for its success at producing upward mobility among working-class students, is at the No. 2 spot.

These programs focus on teaching students to acknowledge and better manage their own emotions and empathize with the emotions of others.

After 3 1/2 years, students exposed to SEL academically outperformed their peers by an average of 13 percentage points, and they did better on many other measures as well.

"At other follow-up periods, conduct problems, emotional distress and drug use were all significantly lower for SEL students," the study found. "Benefits were similar regardless of students' race, socioeconomic background or school location."

A second report released this week, by Pennsylvania State University, found that every dollar invested in SEL returned $11 on average because of better outcomes for young people.