DeVos Protests In Denver; House To Make Cuts To Education

DeVos Protests In Denver; House To Make Cuts To Education 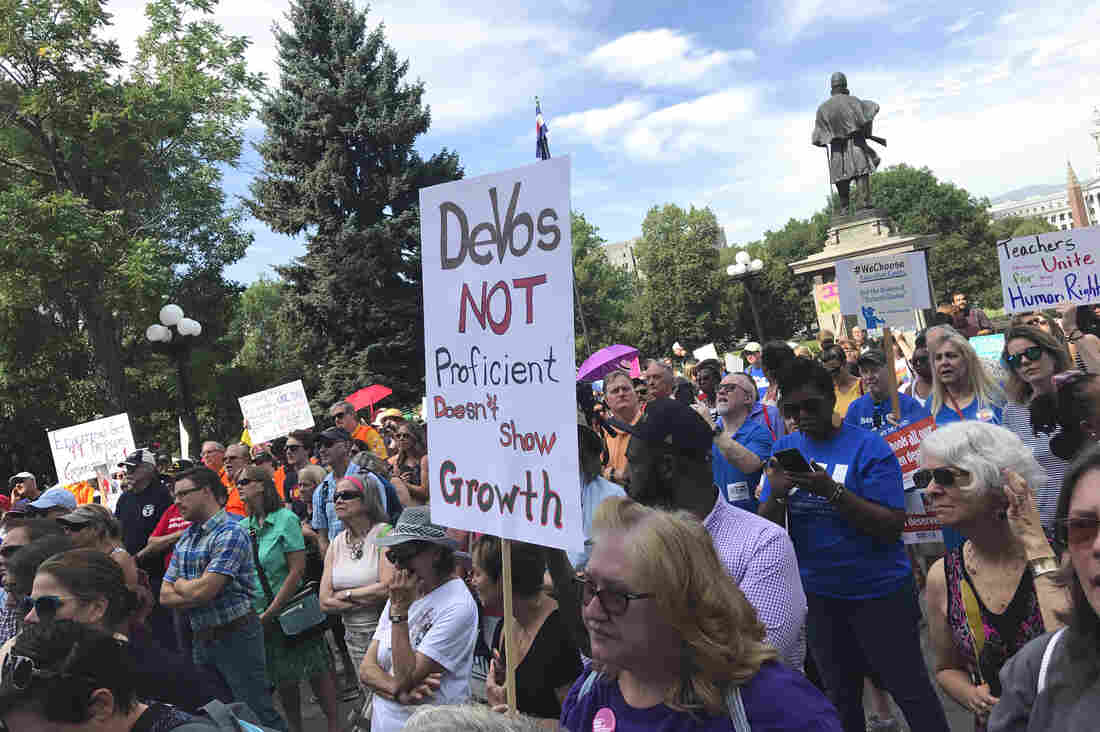 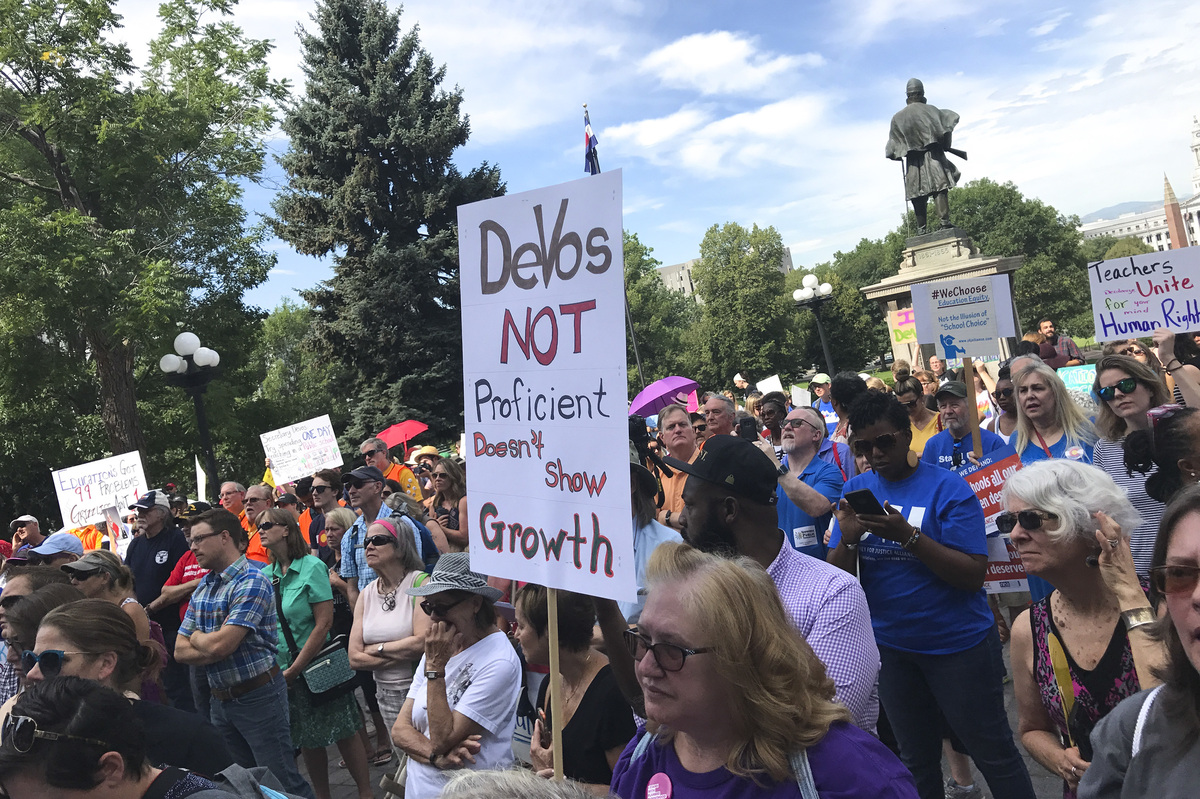 Hundreds of protesters greet Education Secretary Betsy DeVos this week in Denver, where she addressed the American Legislative Exchange Council.

In this week's edition of our education news roundup, we take you from school vouchers to AP exams to community college.

Protests greeted the education secretary in Denver this week at her speech to the American Legislative Exchange Council. Her family has close ties to the organization, which brings together state legislators, free-market conservatives and corporate sponsors to write model bills that get adopted all over the country.

ALEC and Betsy DeVos both back vouchers, tax credit scholarships, education savings accounts and expansions of charter, home-schooling, virtual and for-profit providers. Her rhetoric, here, was more fiery than in previous appearances, as she faced off against critics —"defenders of the status quo" — and praised ALEC for "the fight" to expand school choice. She also hit familiar notes:

As we reported, the timing of her speech was a bit awkward:

House Republicans have just rejected the school choice expansions in Trump's initial budget request. Recent studies have shown mixed-to-negative results for voucher programs, and there have been successful fights against voucher expansion even in staunchly red states like Texas.

The Republican-controlled House has been working on its spending plan, including for education.

This week, the budget committee adopted a plan to cut $20 billion from education over 10 years. The resolution, which is only one step toward becoming a law, makes reference to streamlining the federal college loan program, a likely source of some of the cuts.

Last week, House Republicans introduced an appropriations bill through September 2018 that freezes Pell Grants, the largest need-based aid program for college students, and takes back $3.3 billion from the program's surplus. The budget includes $2.4 billion in education cuts. By contrast, the Trump budget proposal called for more than $9 billion in cuts.

The nonprofit Code.org, which promotes computer science education, noted that 29,000 female high school students took an Advanced Placement exam in computer science this spring, 10 times more than 10 years ago. In addition, participation by underrepresented minority groups has doubled compared to a year ago.

Much of this growth is due to last year's introduction of a new AP course, AP Computer Science Principles, a course designed "to appeal to a broader audience," according to College Board materials. The new exam does not require a specific programming language, unlike AP computer science A, which focuses on Java.

Despite the progress in exposure to computer science in high schools, there is a long way to go: Only a little over 1 in 4 of those who took an AP computer science exam this year were girls, and only 1 in 5 were underrepresented minorities.

Eloy Ortiz Oakley, chancellor of the California community college system, the nation's largest, told NPR's Robert Siegel this week that he wants to adopt other pathways to a degree that don't require algebra. Algebra is the single most failed college course. "There are other math courses that we could introduce that tell us a lot more about our students," he said, mentioning statistics as a possible alternative.

Billions in private student loan debt may be erased

Tens of thousands of borrowers could have their decades-old private student loan debt forgiven because of to financial companies' poor record keeping, an investigation by The New York Times found this week.

A total of 58 feminist and legal organizations signed a letter this week calling on the chief of the Education Department's Office of Civil Rights to clarify the data on campus sexual assault and to meet with survivors. Candice Jackson apologized last week for remarks to The New York Times that "90 percent" of campus rape allegations "fall into the category of 'we were both drunk' " or are brought by unhappy ex-girlfriends.

The letter cited Justice Department data that 23 percent of women, 24 percent of gender nonconforming students and 6 percent of men are assaulted while in college. In addition, fewer than 10 percent of reports are found to be false.