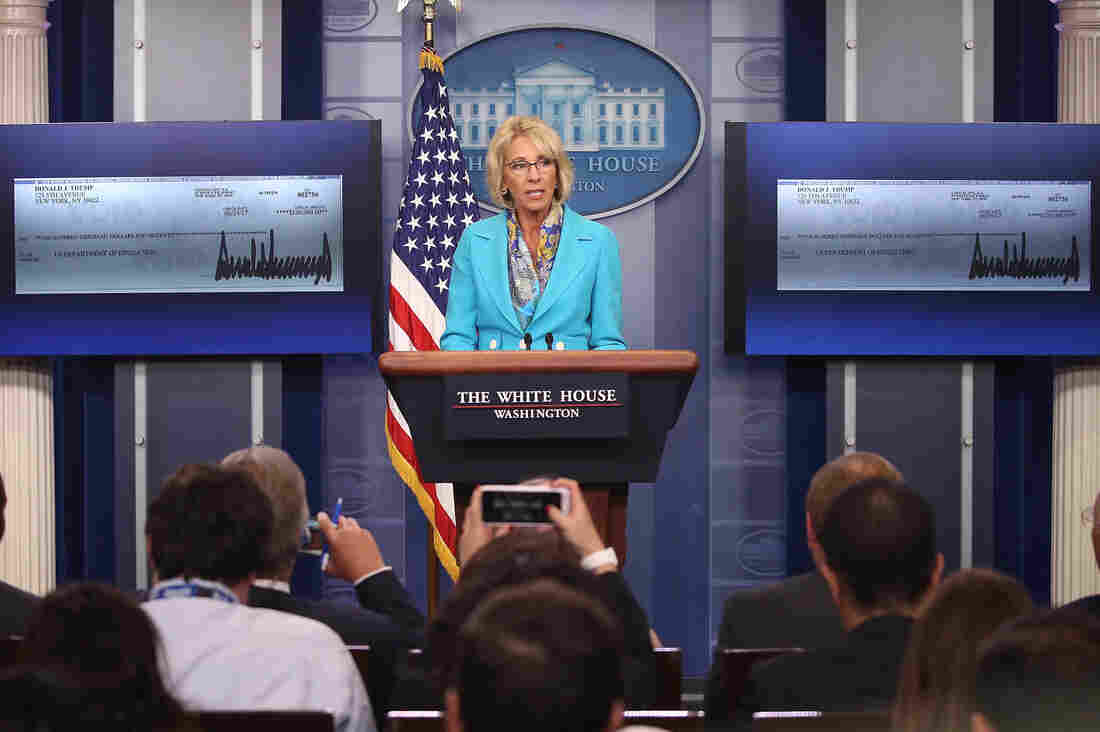 Secretary of Education Betsy DeVos speaks about a donation from President Trump to the Department of Education during the daily press briefing at the White House. Mark Wilson/Getty Images hide caption 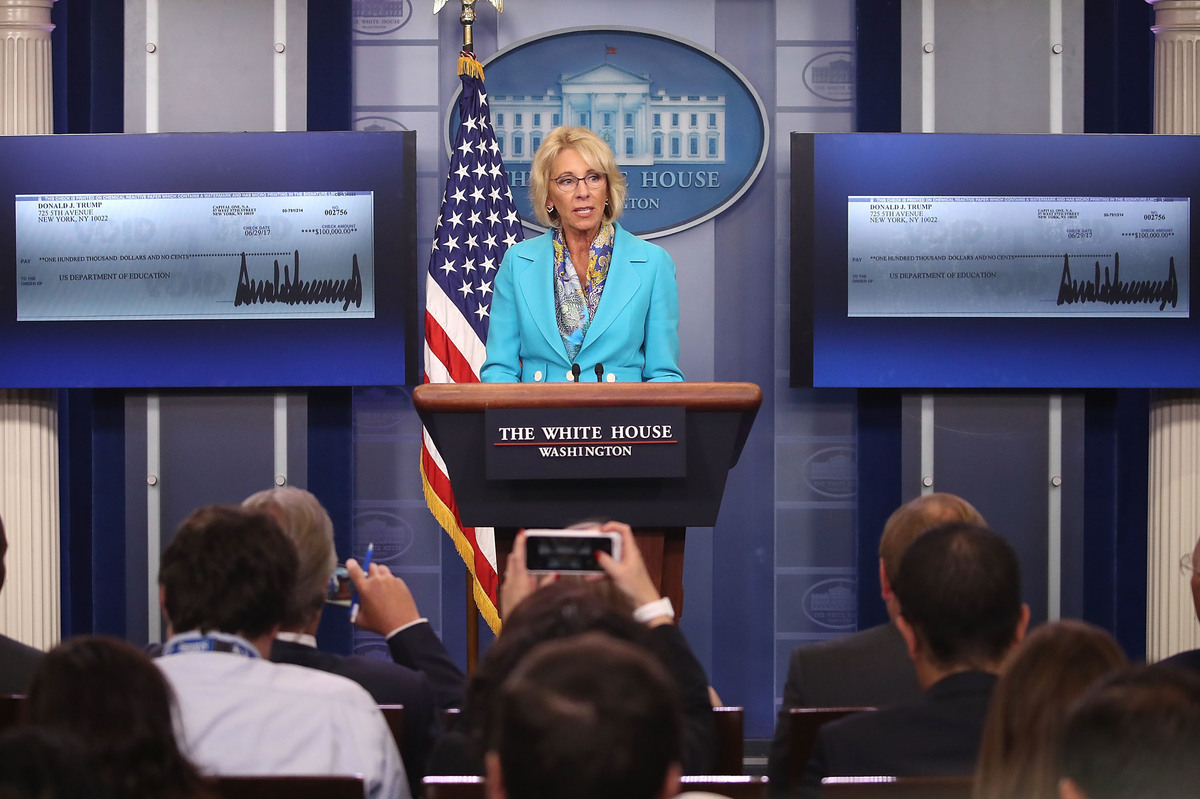 Secretary of Education Betsy DeVos speaks about a donation from President Trump to the Department of Education during the daily press briefing at the White House.

We can't donate a quarter of our salary to you, but we hope you can appreciate the offer of a free rundown of this week's education headlines.

U.S. Education Secretary Betsy DeVos appeared at a White House briefing on Wednesday to announce that President Trump would be donating his second-quarter salary to the Education Department. The money will reportedly go to a science, technology, engineering and math-focused camp for students to be hosted at department. An unidentified spokesperson for the department told NPR, "We are in the beginning stages of the planning process, and as we have more information, we will provide it."

Trump's budget request in May called for a $9.2 billion cut to the Education Department's budget.

NAACP calls for a ban on for-profit charter schools

The civil rights organization has been weighing in on school choice at least since last year, when it called for a moratorium on charter school expansion. An NAACP task force spent the year visiting cities including New Orleans and Detroit, where many African-American children attend charter schools. They have now issued a report calling for tighter regulation, better fiscal transparency and accountability for charters, and an end to for-profit management of schools.

Pressure on parental wallets may be easing up, as The Wall Street Journal reported that college net prices rose on par with inflation in the 2016-17 school year, around 1.9 percent.

By contrast, tuition rose on average 6 percent each year between 1990 and 2014. Potential factors behind the change include an overall decline in enrollment and the fact that undergraduate federal student loan borrowing limits have not increased for a decade.

"Good jobs" can be had without a bachelor's, study shows

Thirty million U.S. workers do fine without a four-year degree, according to a new study out of Georgetown University's Center on Education and the Workforce. The median annual income for these workers is $55,000. The job market is shifting, adding positions in skilled services including in the health and financial industries that more than offset a continuing decline in manufacturing. Increasingly, says the report, "good jobs" are going to those who have at least some college if not an associate's degree.

Defrauded borrowers haven't been getting money back under Trump

Between Jan. 20 and July, no new students who attended defunct for-profit colleges have had their loans approved for forgiveness. That's according to Education Department records released by Sen. Dick Durbin, D-Ill., on Wednesday. Some 15,000 ex-students from shuttered colleges, including Corinthian and ITT Technical Institute, applied during that time to have their loans erased under a procedure known as "borrower defense to repayment." Between 2015, when Corinthian shut down, and the end of 2016, 28,000 people had their loans forgiven under the program, totaling more than half a billion dollars.

Last month, DeVos froze regulations intended to smooth the pathway toward forgiveness for students in this situation, affected by fraudulent or predatory colleges. At the time, she said, "nearly 16,000 borrower defense claims are currently being processed by the Department, and, as I have said all along, promises made to students under the current rule will be promises kept."

WGBH reports that tens of thousands of former students are still in limbo, with no action on their applications and loans that are in some cases in delinquency or default. Liz Hill, a spokeswoman for the Education Department, told WGBH's Kirk Carapezza that although no new claims have been approved under Trump, about 7,000 borrower claims that were previously approved remain to be "discharged" or actually refunded.