Accessibility links
High-Achieving, Low-Income Students: Where Elite Colleges Are Falling Short : NPR Ed Top students from low-income families make up just 3 percent of enrollment on elite campuses, and a new report says there are lots of things higher ed can do to fix that. 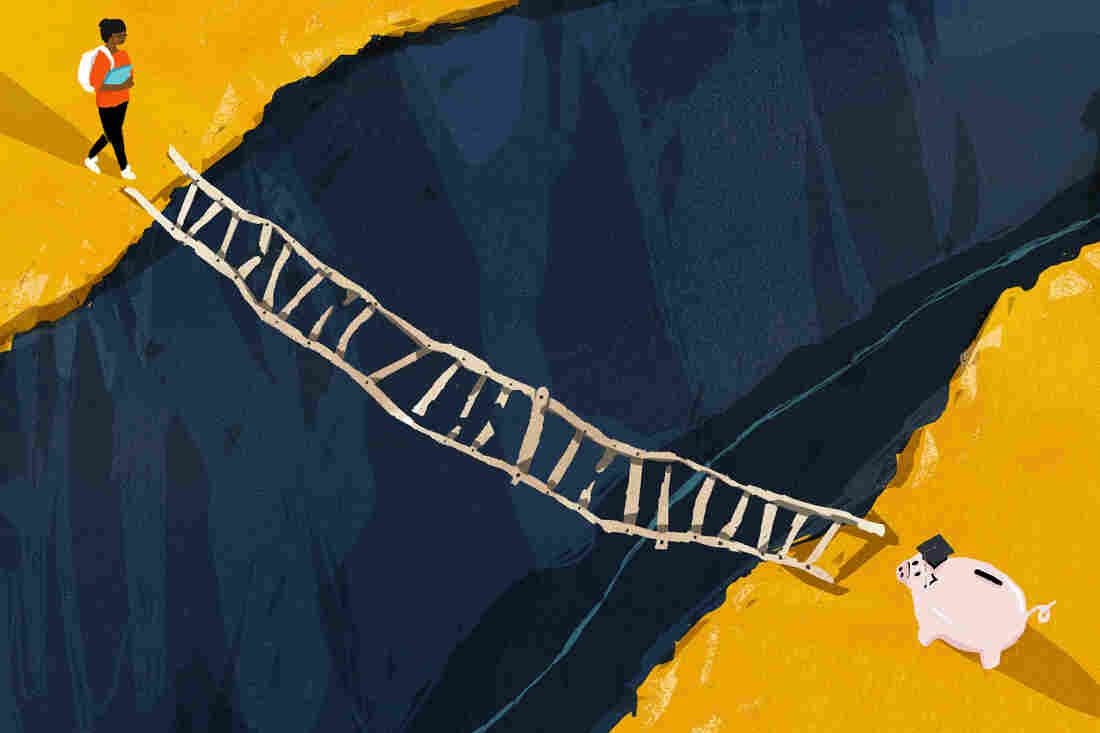 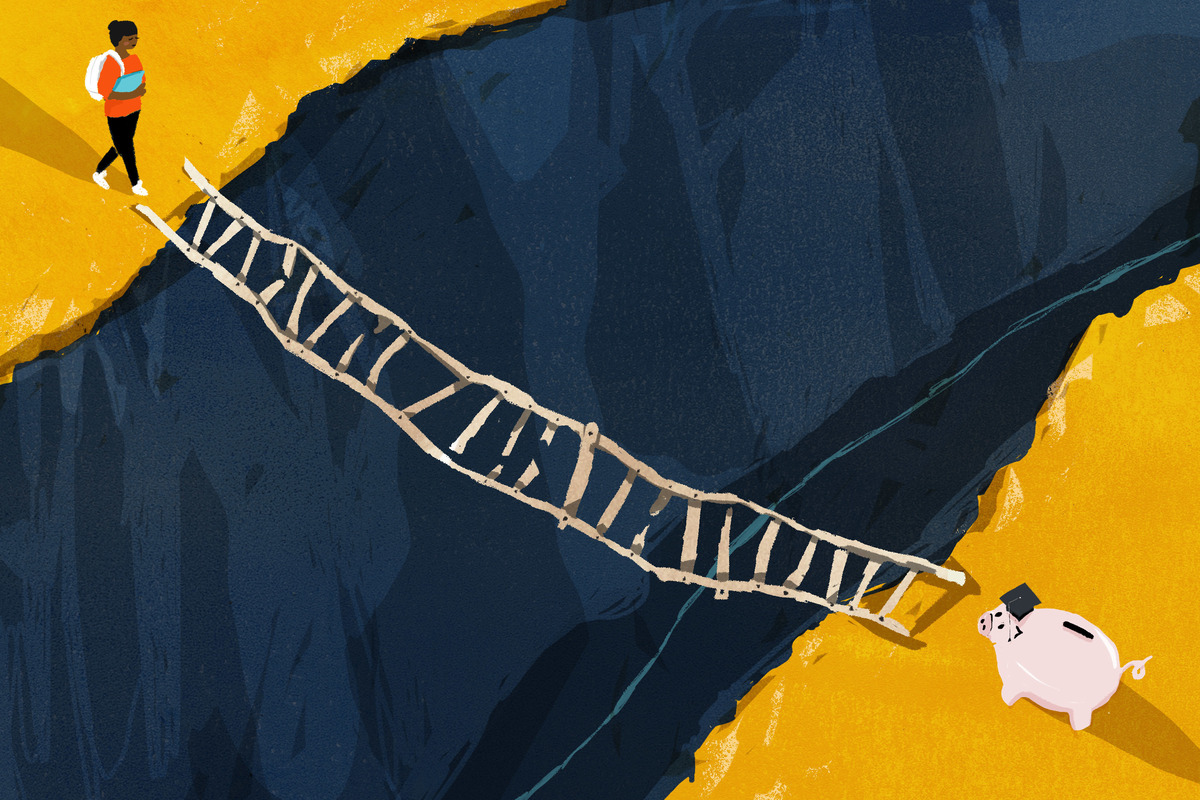 When Anna Neuman was applying to college, there weren't a lot of people around to help her. Students from her high school in Maryland rarely went on to competitive colleges, the school counselor worked at several schools and was hard to pin down for meetings and neither of her parents had been through the application process before.

The only thing her parents told her was that she would have to pay for it herself.

"It was really stressful," Neuman recalls. "I was like: 'What is going on?' None of my friends knew anything — their parents didn't go. It was just us Googling stuff."

Neuman's experience isn't isolated: Nearly 1 in 4 high-achieving, low-income students apply to college completely on their own, according to a new report by the Jack Kent Cooke Foundation (which is a financial supporter of NPR).

The lack of support didn't hold Neuman back — she applied early to the Massachusetts Institute of Technology — where she'll start her senior year this year. But low-income, high-achieving students like Neuman make up just 3 percent of enrollment at elite colleges, the report says. Not having anyone to guide them through the application process is just one of the many reasons there aren't more of them.

The report looks at the barriers these students face, drawing on surveys of low-income students and interviews with admissions officers at selective schools. When I spoke with the report's author, Jennifer Glynn, she acknowledged that high schools and counselors play a role, but said colleges can do a lot more, too.

"There is a public responsibility for higher education," she says. "We don't think that colleges can just turn a blind eye and just wait for the students to come to them."

So what can they do? The report offers some interesting suggestions:

Applying to college is expensive. Fee waivers can help. Even though many schools do offer application fee waivers, the process to receive one can be confusing and burdensome. Some colleges even require school counselors to send a letter requesting a waiver. (Keep in mind: The average counselor helps nearly 500 students.) According to the report, only 65 percent of high-achieving, low-income students applying to selective schools requested an application fee waiver for their top choice school. Of those who didn't request a waiver, about 71 percent said they didn't think they would qualify and nearly 1 in 5 said they didn't know the fee could be waived. The report suggests simplifying this process and being clear that there are waivers every time the application fee is mentioned.

Seeing yourself on campus

Schools should re-examine their message to encourage low-income students to apply, the report says. Pomona College, a small liberal arts school in California, did that, for example, by including low-income students in their promotional videos and recruitment handouts.

When students were asked what the greatest challenge in the application process was, traveling to college campuses for a visit topped the list. And nearly half of high-achieving, low-income students do not visit any of the colleges that they apply to. "That would be unfathomable for a wealthy student," says Glynn. "The campus tour during spring break is almost a rite of passage for high school seniors who come from wealthy families."

Schools are addressing this in several ways. The report points to summer learning programs on campus prior to a student's senior year of high school. Many colleges and universities do this, with all expenses paid. The benefits are twofold: The programs allow low-income students to see what it would be like to be on a college campus, and students are exposed to a rigorous academic standard, which can often convince them they can handle the workload.

Offer guidance on the process

Amherst College in Massachusetts has a work-study program where current low-income students coach prospective applicants through the admissions process. Other universities have successfully tapped their alumni networks to help work with high schools and community organizations.

Admissions officers can, and should, do a better job understanding the context of where a student is coming from, the report says. Have they worked during high school? Maybe that's why they don't have as many extracurricular activities or why they haven't had the opportunity to do an unpaid internship over the summer.

Recent research from the University of Michigan showed that when admissions officers had the nuanced context for low-income applicants, it changed whether they admitted them. When given extra context for wealthy applicants, it had no effect on admittance. "The applications [of low-income students] may look different," says Glynn, "so there is a learning here ... the way that those applications are reviewed may need to shift."

"We've created a system of funding college that puts a really heavy burden on very young individuals and we should be able to make it easier," says Glynn.

The report suggests making financial-aid letters standard across schools — so offers are easy to compare. In the letters, schools should be more transparent about what "zero cost" actually means (in some cases, an award letter will say there is zero cost to students, even if students are taking out loans.)

Schools should remember that costs aren't just tuition — books can be expensive and other small costs can be prohibitive.

And of course, let's not forget that students have to pay for several years of college, not just one — so being clear about tuition increases and renewable aid is incredibly important.

The reports biggest takeaway for colleges and universities? Take a look at their own data and ask: Are we disadvantaging low-income students at any point in the process? And who better to ask for answers than the current low-income students.