Accessibility links
Betsy DeVos Signals A Pullback On Campus Sex Misconduct Enforcement : NPR Ed In a speech at George Mason University, the Education Secretary emphasized due process for the accused. 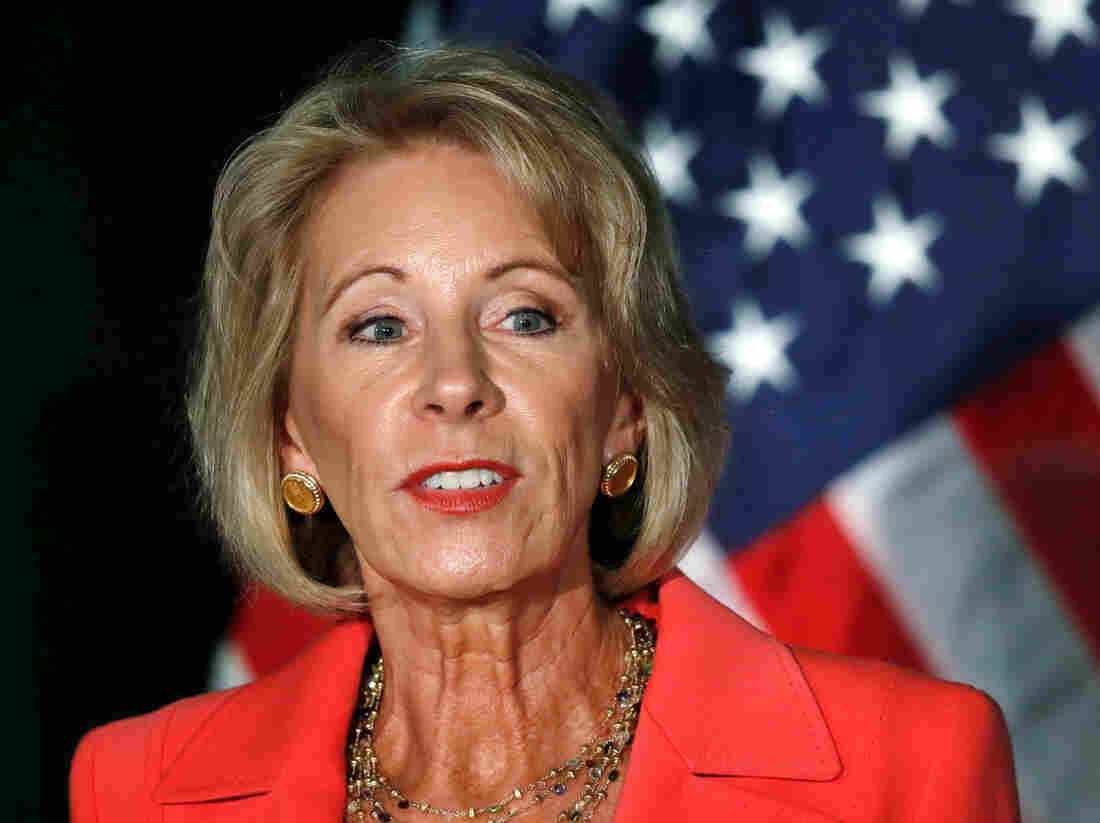 Education Secretary Betsy DeVos speaks about campus sexual assault and enforcement of Title IX on Thursday at George Mason University in Arlington, Va. "One rape is one too many ... one person denied due process is one too many," she said. Jacquelyn Martin/AP hide caption 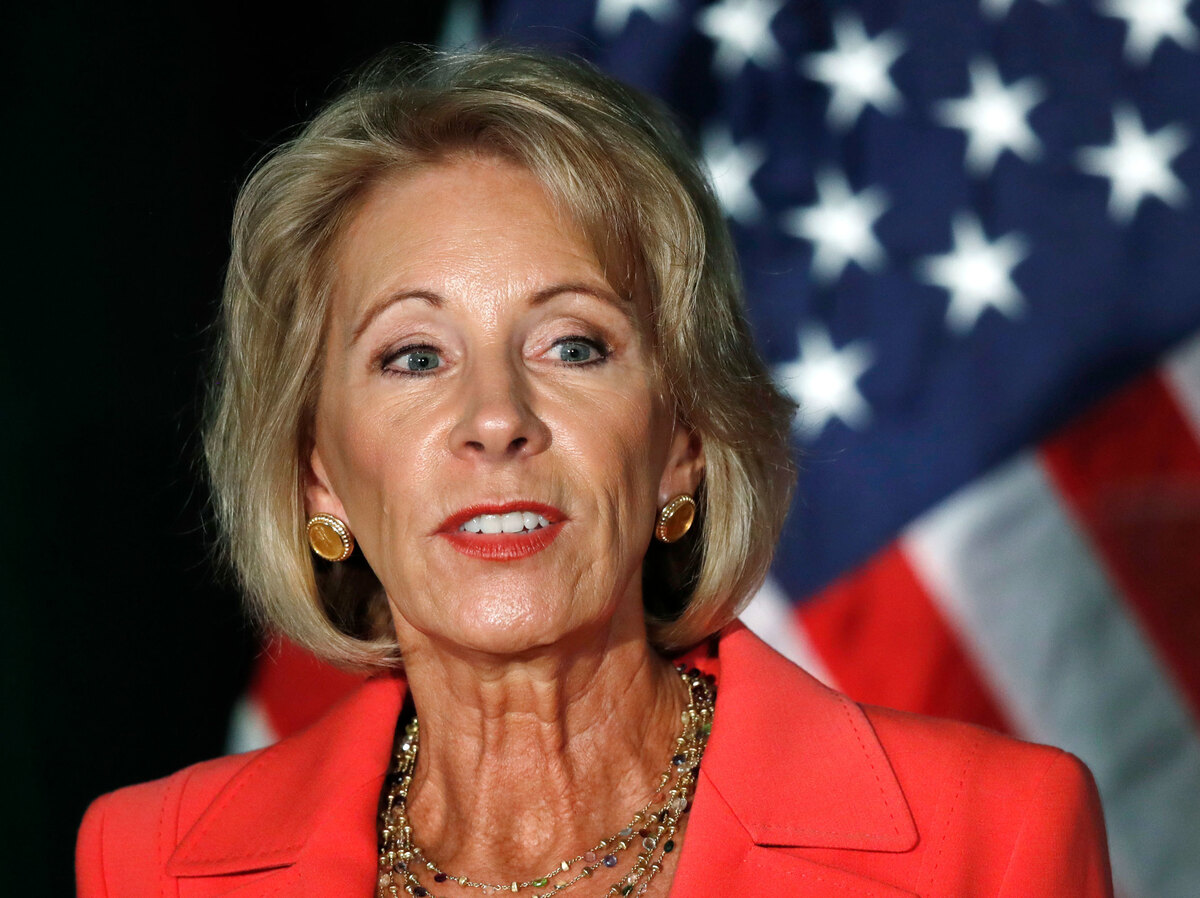 Education Secretary Betsy DeVos speaks about campus sexual assault and enforcement of Title IX on Thursday at George Mason University in Arlington, Va. "One rape is one too many ... one person denied due process is one too many," she said.

The Department of Education will change its approach to campus sexual misconduct and begin a public notice and comment process to issue new regulations, Education Secretary Betsy DeVos announced today. In a speech at George Mason University's Antonin Scalia Law School, DeVos decried "a system run amok," "kangaroo courts" and repeatedly emphasized the plight of the accused. "One rape is one too many ... one person denied due process is one too many," she said. Outside, protesters yelled, "Stop protecting rapists!"

A bit of background.

Title IX, a federal law passed in 1972, prohibits sex discrimination in education. It has been best known for driving the expansion of girls' and women's sports.

The Office of Civil Rights, or OCR, under President Obama took the position that Title IX protects girls and women from the threat of sexual assault, harassment or a hostile environment while pursuing their educations.

In letters and official guidance, OCR told colleges and K-12 schools to investigate complaints more aggressively. Some of the consequences have been controversial across the political spectrum.

They were told to adopt a "preponderance of the evidence" standard, a lower burden of proof than is typically required in a criminal case.

And, OCR stepped up its own investigations of campuses over Title IX complaints. If colleges didn't comply, they stood to lose access to federal student aid, which almost no school can afford to do.

Colleges hired Title IX compliance officers — dozens at schools like Yale and Harvard. They created new rules, policies and procedures. Students, faculty and staff took mandatory training on sex abuse and harassment. The Education Department launched hundreds of investigations, some of which have dragged on for years.

Legal experts and faculty have found fault. Last year, an open letter signed by 21 professors at leading law schools argued that "free speech and due process on campus are now imperiled."

Similarly, a report last year from the American Association of University Professors found, "questions of free speech and academic freedom have been ignored" in what it called "abuses" of Title IX.

In an emotional address, DeVos told anecdotes about accused students contemplating, and committing, suicide. She mentioned a controversial case in which a University of Southern California football player was expelled for what his girlfriend says was merely "playful roughhousing."

Not too much, argues Scott Schneider. Former associate general counsel of Tulane University, he now works with universities on Title IX compliance for the law firm Fisher Phillips. "None of my clients are going, 'Oh, wow. The Trump administration isn't as aggressive on enforcement now, we're going to scale back.' " The staffing-up and intensified investigations that happened the past several years are supported by advocates and prospective students, he says. However, he says that colleges may be ready to revisit policies with an eye toward improving due process for the accused.

"When you say 'sexual misconduct,' that goes on a transcript and that kid has some serious problems," says Vanessa Grigoriadis, a journalist who reported on sexual mores across several different campuses for her new book Blurred Lines: Rethinking Sex, Power & Consent On Campus.

"That kid gets suspended, expelled, humiliated, his parents are totally ostracized. There is real pain on the other side." At the same time, she points out, surveys consistently show that more than one in five female college students is a victim of sexual misconduct, most of which is never investigated or punished. "There is a lot of pain on the girl's side, too."