Accessibility links
Want Change In Education? Look Beyond The Usual Suspects (Like Finland) : NPR Ed New ideas for learning are found in the most unexpected places. Three new projects are helping them spread.

Want Change In Education? Look Beyond The Usual Suspects (Like Finland)

Want Change In Education? Look Beyond The Usual Suspects (Like Finland) 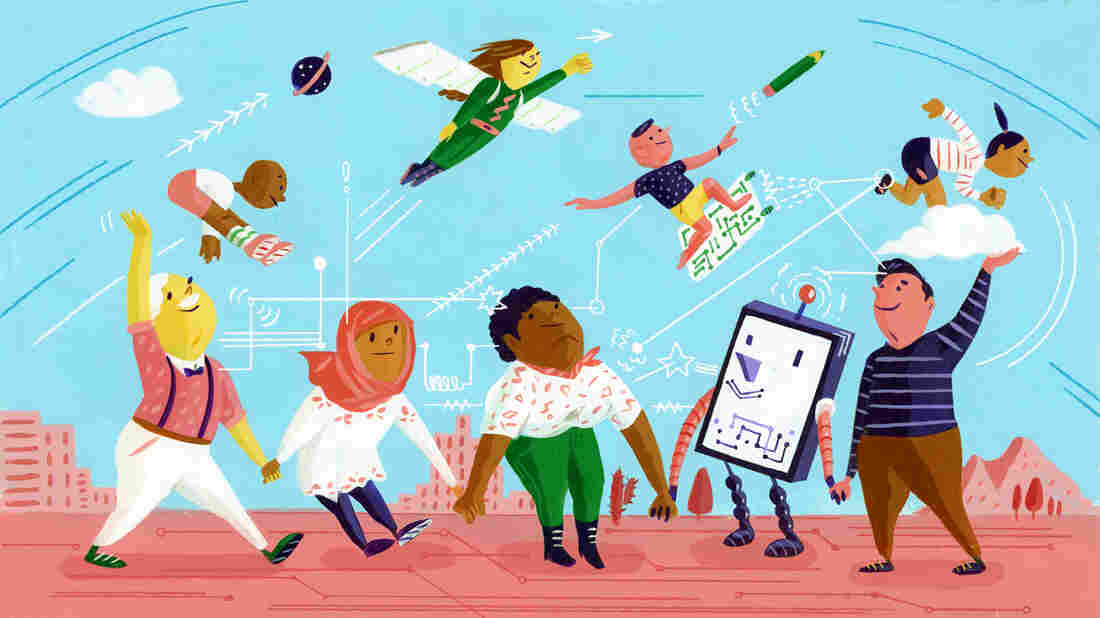 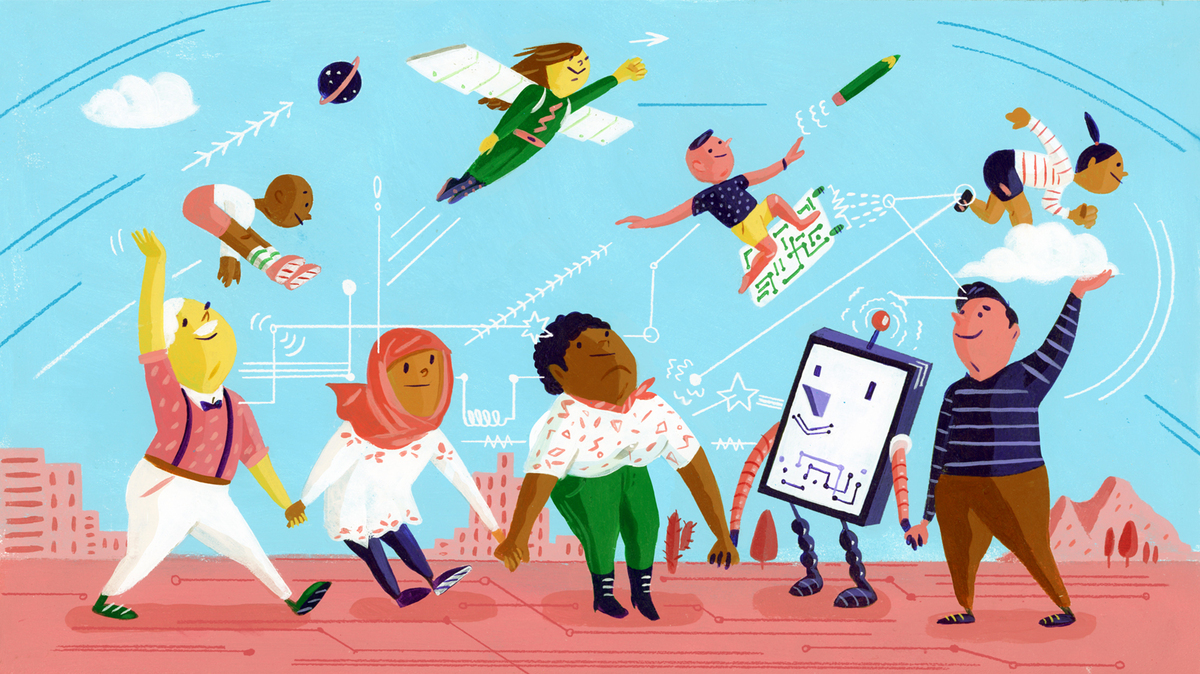 In a tiny hamlet in Tanzania, children who have never been to school, and can't recognize a single letter in any language, are about to start learning basic math and reading. They'll do this with the help of a cutting-edge, artificially intelligent "tutor" who can hear what they are saying in Swahili and respond meaningfully.

In the slums of Bogota, Colombia, children play with special board games, dominoes and dice games that can teach them math and reading in a matter of months. Youth volunteers in the community help bring the games to younger children.

On the outskirts of Tokyo, a kindergarten is built more like a giant playground. There is a circular park on the roof. You can reach classrooms by climbing a tree. A slide that goes from top to bottom of the building and the furniture is made of lightweight wooden boxes that the children can reconfigure themselves.

These three ideas have something in common. Each is part of a distinct global effort underway right now to identify important innovations in education and to help them spread.

The first project, RoboTutor from Carnegie Mellon University, is one of the just-announced finalists in the Global Learning Xprize, a $15 million innovation competition sponsored by Tesla founder and visionary Elon Musk. Mission: Create a software application that will enable children to learn basic math and reading independently.

The second, Literacy Education and Math Lab or LEMA, was highlighted in a recent report from the Brookings Institution's Center for Universal Education titled "Can We Leapfrog? The Potential of Education Innovations to Rapidly Accelerate Progress." Brookings has cataloged 3,000 innovations from 166 countries so far.

The third, known as Fuji Kindergarten, was picked by a Finnish nonprofit called HundrED dedicated, again, to spreading the top educational innovations from the world, around the world. Today they announced their first global group of 100 ideas from 42 countries.

Something big is happening here. Governments, nonprofits, donors and educators are gearing up to try to solve two intractable, and seemingly disparate, problems — at the same time.

The first one is that not enough children are learning the basics. The second is that the basics are no longer enough. And to solve these two problems, they are working hard to spotlight and spread innovations that go far beyond Silicon Valley.

The first problem, and likely the most familiar, is inequality. More than a quarter of a billion kids worldwide don't attend school, and that number hasn't budged for a decade. The Global Learning Xprize challenge is addressed specifically at these children, who may never see the inside of a schoolhouse or meet a trained teacher.

For those who are in school, meanwhile, there is a massive gap in basic skills between the richest and the poorest. You can express this as points on a standardized test: in the United States, for example, that gap is almost 40 percentage points in math at the highest level.

Or, you can express it in years: Adults living in the poorest countries in the world are about as educated as the average for adults in rich countries 100 years ago. And, at the rate they're going, it would take another century to catch up.

But there's a second problem. Just learning reading and math the way it was done 100 years ago is not going to prepare anyone for the future. Up to 70 percent of the tasks in most jobs are on track to be automated, leaving only the most creative, empathetic, technically fluent, collaborative work for humans.

3 Things People Can Do In The Classroom That Robots Can't

Students need to find motivation and meaning, and take a playful attitude that makes it safe to try and fail.

It's as though half the world's children were 100 years behind on learning to walk, but everyone now needs to dance.

From walking to dancing

That's why Rebecca Winthrop of Brookings asked the question "Can We Leapfrog?" In other words, she says, "How quickly can we transform both what and how children learn?"

Leapfrogging as a concept is often associated with technology. Countries in sub-Saharan Africa, southeast Asia and elsewhere adopted mobile communications without ever having extensive landline or telegraph networks. Kenya is a world leader in mobile payments because the system came in before people had formal bank accounts or credit cards. Social goals like sustainability can leap forward, too. This summer the nation of India, where car ownership is far behind the U.S., announced a goal to sell only electric vehicles by 2030. China is leading the world in both production and installation of solar power.

But schooling is fundamentally a human enterprise.

Change can't just be a matter of mass-producing some technological marvel and pushing it to market. And there are many in the development world, says Winthrop, who argue that poor countries should master the basics before trying to address 21st century skills. Can you really take people who can't walk and show them the moonwalk?

The One-Room Schoolhouse That's A Model For The World

Her work argues that it has to be both/and.

"From the learning sciences literature we know that kids can learn small things," like addition and subtraction, "on the way to big things" — like creativity and collaboration, she says. "We're not doing poor kids any favors by the drill-and-kill method." Projects like LEMA, the board game project that started in Latin America and is now in 16 countries, bring a playful attitude to learning, which is part of cultivating what Winthrop calls a 21st century "breadth of skills."

Leapfrogging isn't about supplanting traditional schools, Winthrop explains, but it does address the need to change how they do business. Even in rich countries with high literacy rates, like the United States for example, there's a great deal of dissatisfaction expressed about education. And here's where leapfrogging really gets interesting: Some of the places with the fewest resources can become sources for huge inspiration.

Identifying great ideas is one thing, but getting them to spread is another. It requires overcoming a silo effect, says Saku Tuominen, the Finnish innovation expert who is the creative director of HundrED.

"If you think of a teacher in Helsinki, New York, New Delhi, Stockholm, Buenos Aires, they haven't got the faintest idea what is happening in another city on the classroom level," he says. In fact, they often don't even know much about what the teacher down the hall is doing.

One theme he's identified among the innovations highlighted so far has to do with exactly that problem: thinking about new ways for teachers to collaborate and co-teach. Other professions are increasingly evolving in a collaborative direction, he notes; why not teaching?

His nonprofit offers free support in PR and consulting to educators with ideas worth sharing, and it helps identify schools that want to adopt the ideas. "We're moving to a global world and it's time to make education global as well."