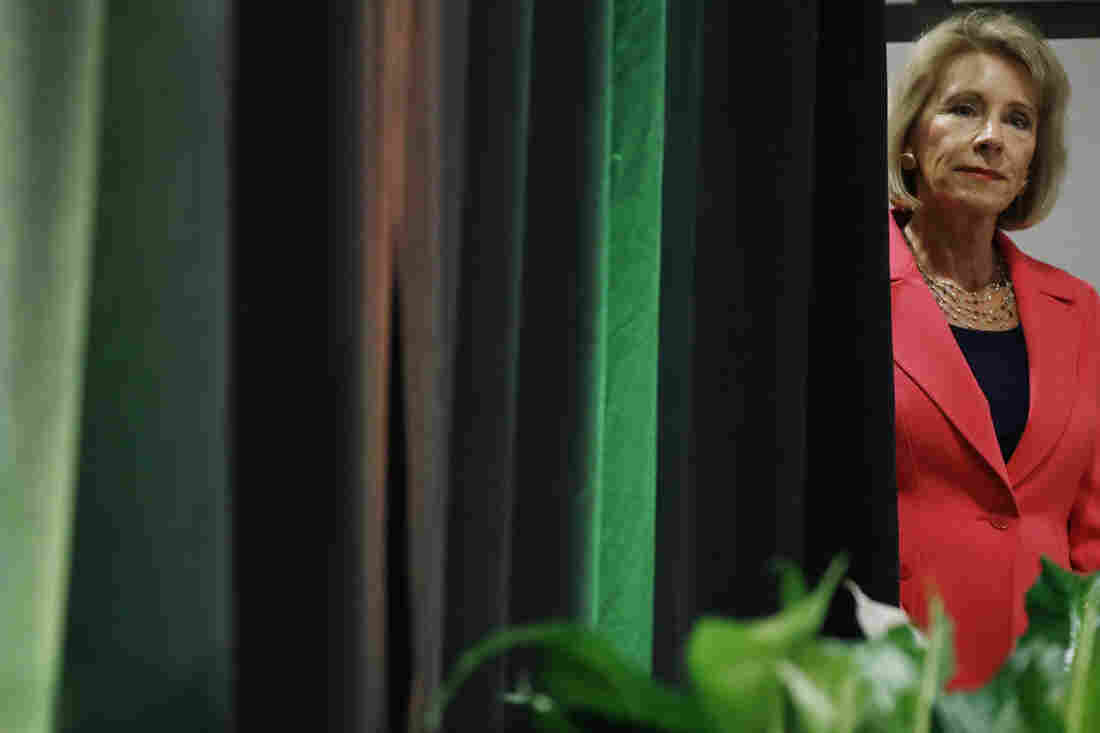 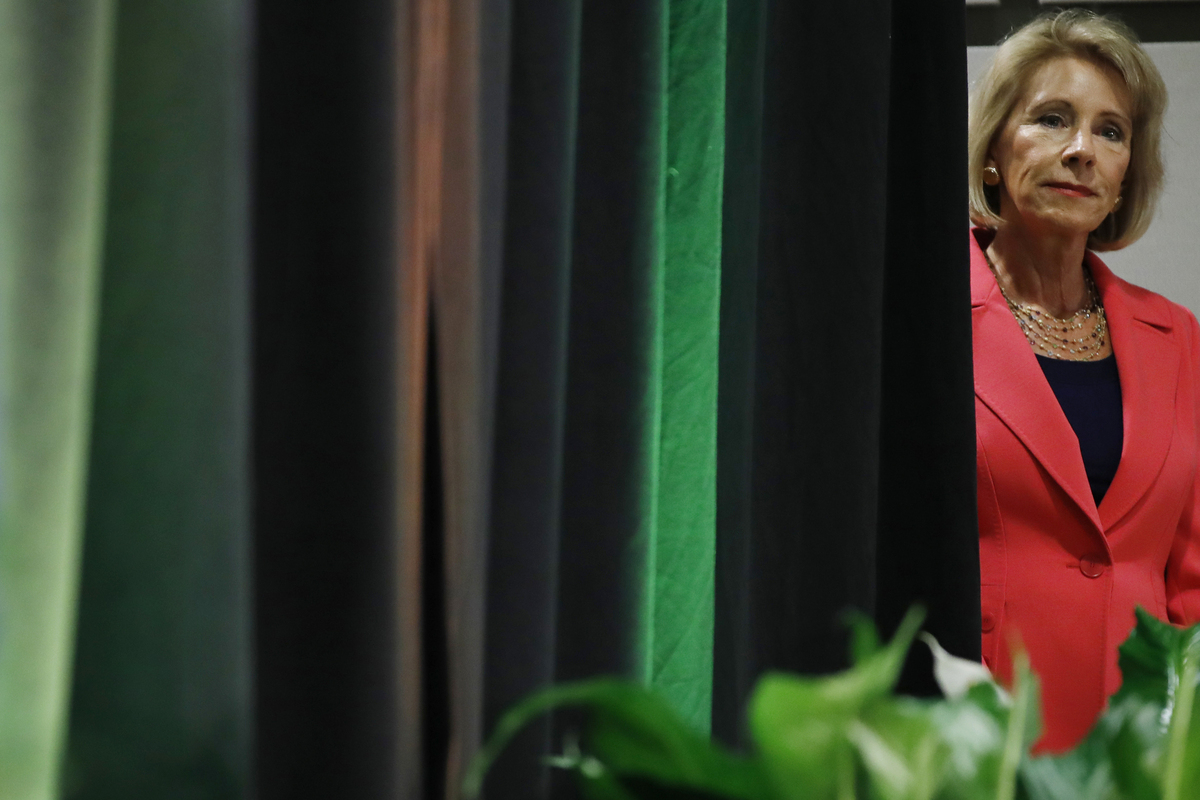 Education Secretary Betsy DeVos has faced lawsuits and opposition since her hotly debated confirmation in February.

It has been more than six months since Betsy DeVos was confirmed as education secretary after one of the most contentious Cabinet nomination battles in memory, and so we thought it worth an update on her major moves so far — and the public response.

DeVos is most associated with one idea: school choice. In particular, she has a record of supporting options other than traditional district public schools, such as charter schools, virtual schools, vouchers for private schools and home schooling. She has signaled that support as secretary by often visiting private and charter schools.

However, going all the way back to her confirmation, DeVos didn't actually advocate a stronger federal role in any area of education, including in expanding school choice. "The future of choice does not begin with a new federal mandate from Washington!" as she put it recently in a speech at Harvard University.

President Trump's initial budget proposals to expand money for charters and vouchers have been shot down in congressional committees; their fate is uncertain until Congress votes on the budget later this year. In the meantime, the department announced $253 million in grants to states for charter schools late last month — the continuation, at similar funding levels, of a program introduced in 2014.

Higher education is a source of research, innovation and inspiration and the training ground for America's future workforce. It is also a very big business, with student loan debt surpassing credit card debt.

And industry interests have been well-represented in DeVos' department.

In May, the top federal student aid official, an Obama appointee, suddenly resigned. His replacement, A. Wayne Johnson, was the CEO of a student loan company at the time he accepted the job. Julian Schmoke Jr., the department's new chief of student loan enforcement, has worked for a for-profit college.

DeVos is being sued by more than a dozen states for delaying a regulation designed to make it easier for defrauded student loan borrowers to get their money back, typically from for-profit colleges.

The Consumer Financial Protection Bureau, formed after the financial crisis, has taken a lead role in consumer protection for students and student loan borrowers. Under President Barack Obama, CFPB shared information and cooperated on enforcement with the Education Department. At the end of August, the department terminated those arrangements. In a letter, department officials called the CFPB "overreaching and unaccountable."

Finally, Trump's education budget calls for phasing out Public Service Loan Forgiveness. Nearly half a million teachers, social workers, police officers and other public servants are enrolled in the decade-old program, with forgiveness set to begin this fall.

The department is being sued by some enrollees in the program. The latest motions in that case from the department assert that there has been no final decision on whether anyone will have their student debt erased under the program. A hearing scheduled for this week was postponed.

On the topic of student aid, one DeVos move with bipartisan fans has been the reintroduction of year-round Pell Grants.

The Office of Civil Rights within the Department of Education is charged with enforcing anti-discrimination statutes, including Title IX, which prohibits discrimination against students on the basis of sex.

The Obama-era OCR stepped up enforcement and also used the bully pulpit, by issuing guidance to schools that they should affirmatively protect the rights of transgender students and actively investigate complaints of sexual assault and harassment on campus.

DeVos and her OCR appointee Candice Jackson have made headlines by rolling this guidance back. They have also indicated that open investigations will be wrapped up more quickly.

With regard to campus sexual assault, DeVos has spoken about the need to balance the interests of the accused with those of victims in statements that some survivors' groups likened to sweeping sexual assault under the rug.

That said, some legal experts have argued that the Obama guidance was taken too far in some cases, with negative impacts on due process, free speech and academic freedom on campuses. Others have already weighed in with recommendations about making the process more fair and transparent.

Interim guidance, released in late September, focuses on "prompt," "impartial" and "equitable" resolution of complaints. It also gives colleges discretion to apply either a "preponderance of the evidence" standard or a higher "clear and convincing evidence" standard to complaints. The latter places a greater burden of proof on accusers.

DeVos' nomination drew more opposition, by volume, than that of any other Cabinet member. In February, we explored some potential reasons why.

A poll out from Politico/Morning Consult on Sept. 27 indicates that not much has changed. DeVos came in as the least popular Cabinet member with a 28 percent favorable and 40 percent unfavorable rating. (Not included is Health and Human Services Secretary Tom Price, who resigned after a scandal involving chartered flights).

DeVos has a stepped-up security detail compared with previous education secretaries. Whether the venue is Harvard University's Kennedy School of Government, a commencement ceremony at the historically black Bethune-Cookman University, a conservative policy conference or an otherwise-routine school visit, she has drawn loud dissent.

Arne Duncan, who served as education secretary under Obama, faced down his own protesters from time to time. He spoke out to defend DeVos when she was physically prevented from entering a school in Washington, D.C., shortly after her confirmation.