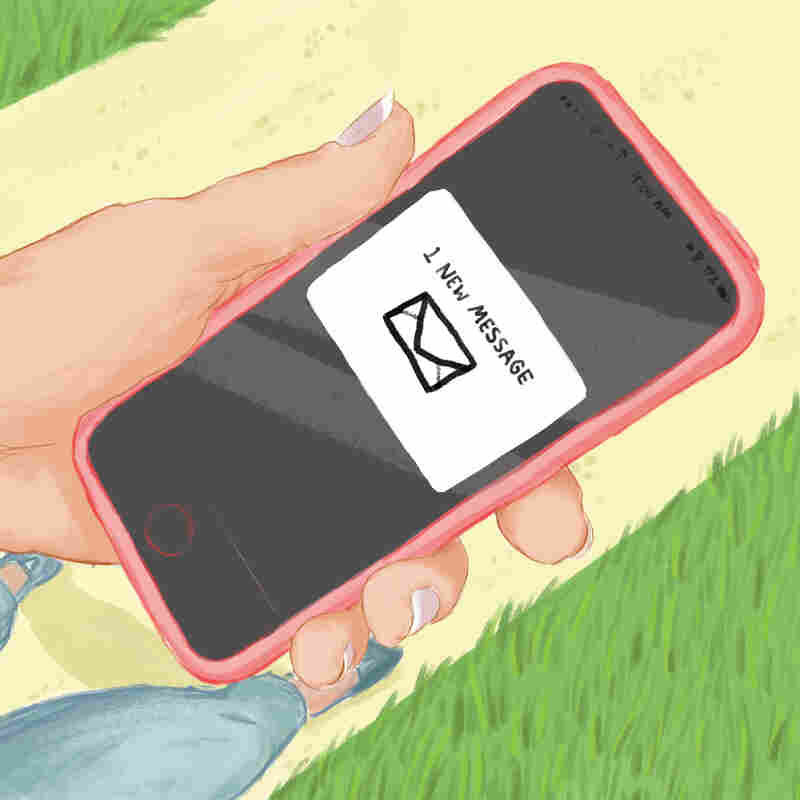 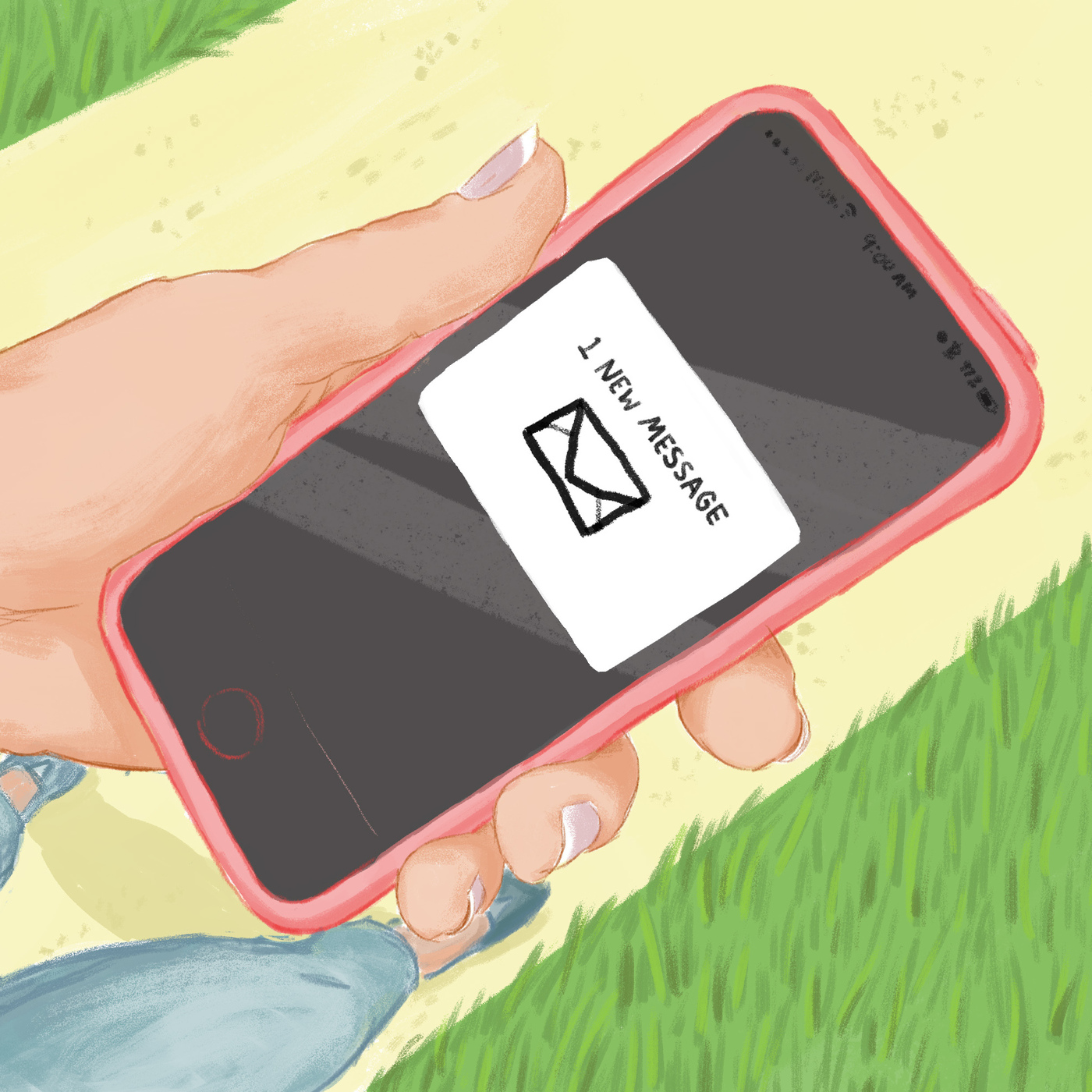 This is the first story in an NPR series, "Take a Number," that will explore problems around the world and the people who are trying to solve them.

Elisheva Adler was 20 years old, sitting in pajamas in her childhood bedroom in Long Island, the first time she saved someone's life via text message.

Adler had just started volunteering as a counselor for Crisis Text Line. The 4-year-old nonprofit provides free crisis intervention through a medium that is increasingly favored by young people: texts. Using the code 741741, counselors have exchanged more than 50 million messages with people who are facing issues from stress at school to self-harm. Out of those exchanges have come thousands of "active rescues" where first responders are called to a scene.

Adler heard about Crisis Text Line when she watched a TED talk by founder Nancy Lublin. Lublin had been running a text-based volunteer organization for teens, called DoSomething. One day, Lublin tells NPR, the platform got a text that read, "'he won't stop raping me. It's my dad. He told me not to tell anyone. r u there?' "

"It was so terrible and desperate that it stopped us in our tracks," Lublin says. "And a couple of weeks later I just thought, wow. If they're going to share stuff like this with us, if they're that alone, if they trust text that much, there should be a hotline by text. And so I set out to build it."

Adler, for her part, had been looking for a way to help people ever since she lost a friend to suicide when they were both teenagers.

"I sort of knew depression existed, but it existed somewhere out there," she says. "And when I lost my friend I remember just first being so confused and then just being frustrated. Like, what did I not see?"

To volunteer, Adler completed over 30 hours of training. Then, she began logging into Crisis Text Line's platform late at night and on weekends, when volume is typically highest. And one night she found herself chatting with someone who told her he was a veteran having problems with his marriage. "At some point he said, I just want to disappear."

Thanks to Adler's training, these words set off alarm bells. She asked whether he was thinking of suicide, and whether he had a method in mind. "He said, 'yes, I'm sitting on the edge of a bridge.' "

It may sound strange, or too explicit, but Adler's training taught her to ask these questions to identify an imminent danger. That's because having a concrete plan is a key risk factor for suicide.

Crisis Text Line employs data scientists who constantly analyze the texts coming in. One goal is to make sure the most serious texts get answered first. This has yielded unexpected insights.

For example, they have found that the word "ibuprofen" is a very powerful indicator that someone will make an attempt in the next 24 hours. It's 16 times more telling, their research shows, than the word "suicide" itself. The name of this common over-the-counter drug indicates that someone has the means to harm themselves, and a plan in mind.

Earlier this year, the Centers for Disease Control and Prevention reported that suicide rates for teen girls, specifically, in the U.S. are at a 40-year high. Crisis Text Line is especially well targeted to this group. Seven out of 10 texters are women, and 75 percent are under age 25. They also skew rural, LGBT and low-income. Lublin says people often hear about them through viral posts on social media. If you search the hashtag #741741 you will see posts on Instagram, Twitter, and Facebook spreading the word.

Crisis Text Line is not set up to provide ongoing therapy. But Lublin says the service aims to be more than just a Band-Aid. Their philosophy is that intervening at the right time, with referrals to a network of organizations on dozens of different issues, can make a lasting difference in someone's life.

People often tell the counselors something they have never told anyone else. "Many of these things, it's a hot moment where you can be tipped to a healthy decision or an unhealthy decision," Lublin explains. Her goal going forward is for the organization to take more of the burden off local 911 dispatchers and first responders.

Clearly, she says, there is a need. Fifty million texts were exchanged in the first four years, and they expect another 50 million just within the next year.

For example, although National Suicide Prevention Awareness Month is in September, Crisis Text Line's roughest times are in the spring, when school stress peaks.

This time of year, around Thanksgiving, also sees a spike, Lublin says, because of what she calls: "Breakupmageddon" or "the turkey dump." That is, many people end relationships around Thanksgiving, whether college students returning home or young adults considering bringing a partner home for the holidays.

On that night, when the man texted Elisheva Adler that he was on the bridge, Adler contacted her supervisor. Trained professionals are always available on Crisis Text Line's web site to support the volunteers.

Her next job was to get the man to give her his location, so first-responders could be called. And she kept the conversation going, asking about his child, until he texted her, "I hear them coming. I think I'm going to be okay."

Crisis Text Line currently has about 20 active rescues a day across the country. Adler, who is now 21, had seven in her first year as a volunteer. She has recruited many friends to volunteer as well. And she is applying for Ph.D. programs in clinical psychology.

Working with Crisis Text Line, she says, has "really restored my faith in humanity."

Crisis Text Line refers many texters to dozens of other organizations, depending on the issue they are struggling with. Here are some examples; the full list is here.