Accessibility links
Puerto Rico Faces School Closures As Enrollment Shrinks After Maria : NPR Ed More than 22,000 students have left the island since the storm. Authorities say they'll have to make further cuts, yet some of these schools are central to their communities. 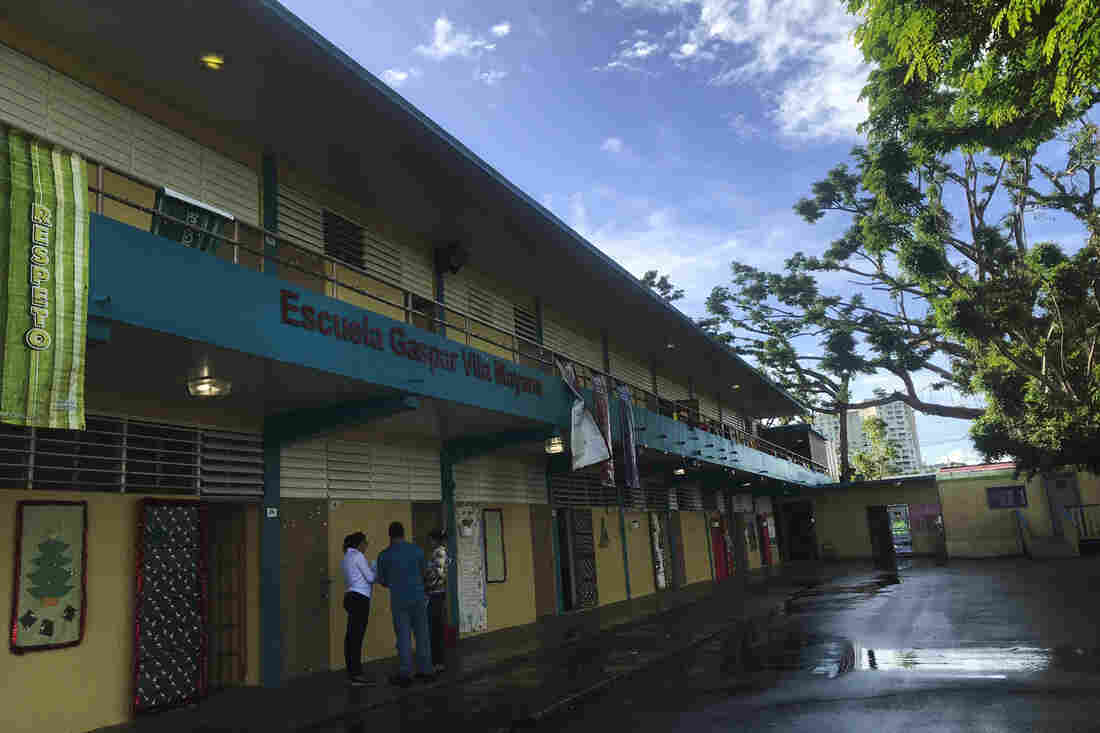 Without enough students to fill up its classrooms, Gaspar Vila Mayans elementary, a public school seated in a low-income area in San Juan, is facing the possibility of closure. Lauren Migaki/NPR hide caption 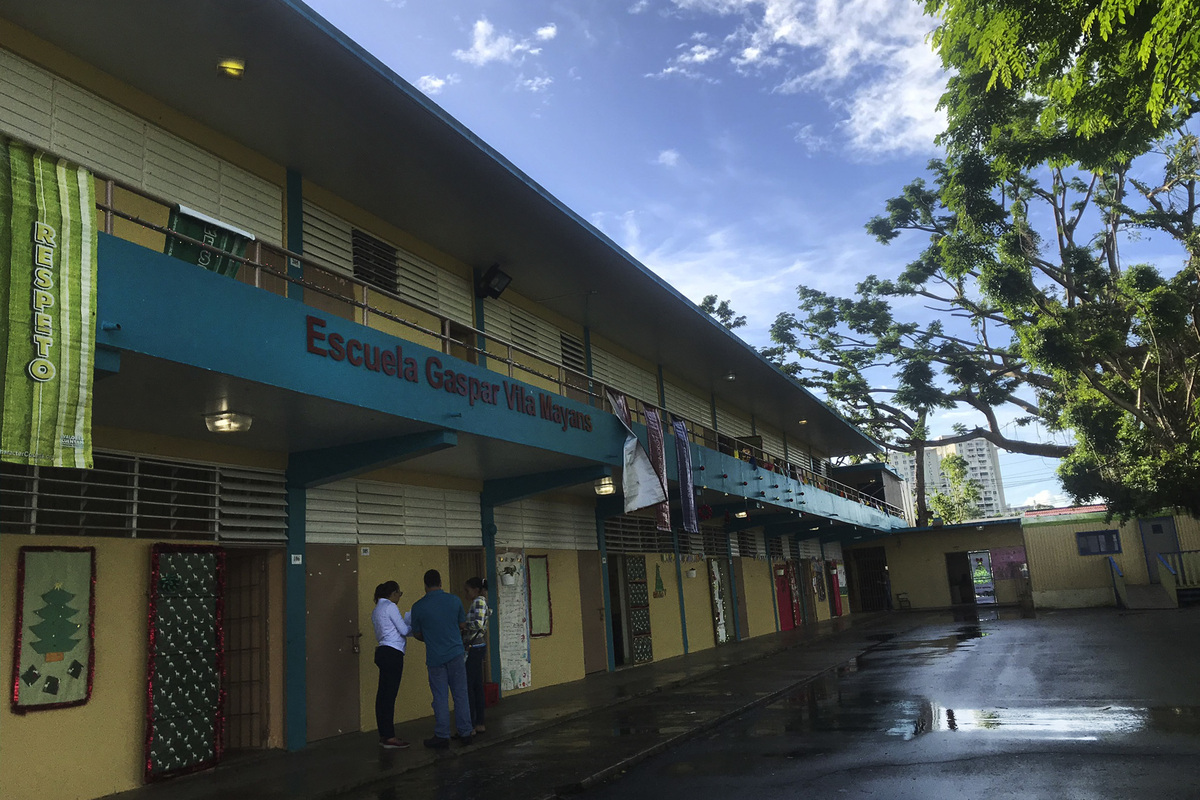 Without enough students to fill up its classrooms, Gaspar Vila Mayans elementary, a public school seated in a low-income area in San Juan, is facing the possibility of closure.

Gaspar Vila Mayans elementary school, in a low-income area in Puerto Rico's capital of San Juan, was one of the lucky ones.

Most of the building escaped damage, and the school was able to reopen just two weeks after Hurricane Maria hit in late September.

Once it was back up and running, the school quickly became a lifeline for the community, providing meals, activities and a sense of normalcy to families and their children.

Now, it's facing the possibility of closure for an entirely different reason – there aren't enough students to fill up its classrooms.

"A lot of kids went to the United States, almost 50," says Principal Rita Barreto. That's about a quarter of the school's students. And the school was already at less than half capacity before Maria.

Across the island, enrollment has shrunk by some 22,350 students since the storm hit, according to Puerto Rico's Department of Education. That means about 1 in 13 kids are gone, and it's unclear whether they'll ever be back.

Puerto Rican Students Head To The Mainland For School

The loss of all those children is likely to accelerate efforts that were already underway to close schools — many of which were operating at less-than-full enrollment — for cost reasons. At the end of last school year, the education department closed 167 schools and transferred their students to other locations. About 1,100 schools remain.

Puerto Rico and its schools are in the throes of a fiscal crisis. The U.S. territory has more than $120 billion in debt and pension obligations, and has filed for a bankruptcy-like procedure.

"We definitely have to close schools," says Puerto Rico's secretary of education, Julia Keleher. "There's about 184 schools that have fewer than 150 kids." That's even less sustainable than before the storm, because there's a possibility for a cut in federal funding due to enrollment, she says. "There's not enough to go around to that many sites to ensure some level of quality of service."

But for communities who have rallied together to open schools after the hurricane, the idea of more school closures is jarring and painful.

When Barreto's school opened back in October, after community members cleared away the debris, it was the first chance for some students to have a full meal since the hurricane. Families ate together and took part in exercises with the school's social worker in efforts to help the children feel safe and begin to deal with the trauma of the storm.

All that came to an end weeks later, when the Department of Education closed the school due to low enrollment and sent the students away to different schools. That decision was reversed a month later, and the school reopened on Dec. 1 with 148 students.

But the disruption to what had become an oasis for the community rattled families who are already feeling vulnerable.

It was "a total disaster," says Yahaira Rodriguez, mother to a fifth-grader. In the weeks that the school was closed, her son attended two different schools. She says she was blindsided by the department's decision and her son faced bullying at the first school he was reassigned to. Now, she says, he's fallen behind in his classes.

"It was a huge impact for the kids and the community," says Nora Ortiz Navarro, the school's social worker. "Kids felt lost and sad. They lost their houses or part of their belongings because of the hurricane. To also lose their school, they felt scared." She adds: "The faster all of us, kids and adults, get back to reality, we begin to heal."

On one early December morning, workers were wheeling school supplies back into classrooms already decorated for Christmas as students got back to their lessons. Things were beginning to feel normal again.

Yet the experience has been a painful one for Barreto, as she and her community have been stuck in limbo for most of the semester.

"I realize that maybe next May or August we have to close some schools," she says softly, as she walks down a hallway where some classrooms are completely empty. She acknowledges the fiscal challenges: "The school needs students to operate. If you don't have students, you don't have a school."

Mercedes Martinez, president of the Puerto Rican Teachers Federation, one of the island's teachers unions, says Keleher is using the hurricane as an excuse to accelerate closures.

"Our Secretary of Education has a plan to shut down schools," she says. "And she wanted to privatize, she wanted to close more, but the communities have fought back."

Keleher says dramatic changes were needed even before the storm, and the hurricane is making a reorganization of Puerto Rico's entire school system all the more necessary.

She says she inherited a system with too much bureaucracy and a random, uneven budget distribution. There are still too many schools with low enrollment, Keleher adds, and the cost of keeping them open could mean a lack of resources for crucial supplies – like books.

As one example, she cites the wildly different ratios of students per teacher across the system. "If you have one [teacher] to 12 [students], and in another school I have one to 26, is that fair? ... I can't lose sight of the obligation that I have to be a good steward of the limited resources that we have."

When asked specifically about Gaspar Vila Mayans elementary, Keleher was well aware of the concerns of the principal and the community.

"The degree to which that school can remain open based on the amount of student enrollment it has in the future is yet to be seen," she says. "That's just the reality of the situation here."