Accessibility links
Laptops And Phones In The Classroom: Yea, Nay Or A Third Way? : NPR Ed We asked teachers, professors, a psychiatrist and a technologist for their thoughts, and we heard a range of opinions on one of the most "weirdly divisive" issues in education. 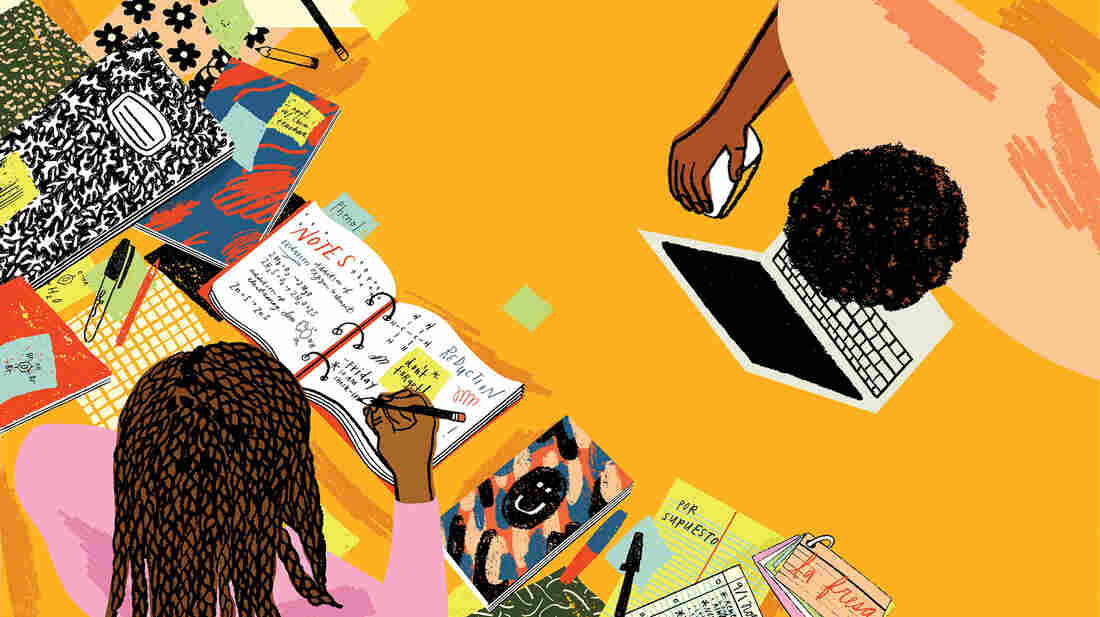 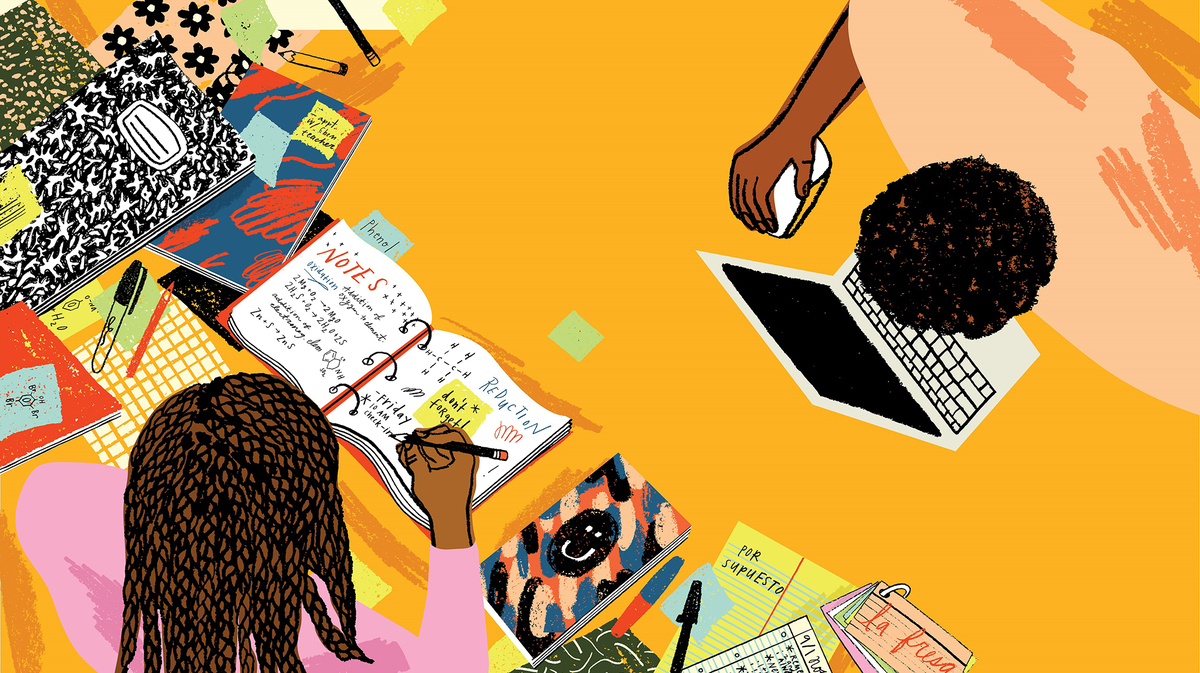 "If something on their desk or in their pocket dings, rings or vibrates — they will lose focus."

"Students are doing so much in class, distraction and disruption isn't really something I worry about."

How should teachers — both K-12 and college — deal with the use of computers and phones by students in class?

On one hand, those sleek little supercomputers promise to connect us to all human knowledge. On the other hand, they are also scientifically designed by some of the world's top geniuses to feel as compelling as oxygen.

So where does that leave teachers? Should you ban these devices in the classroom? Let students go whole hog? Or is there a happy medium?

This seemingly simple topic ends up being what one professor and pedagogy expert calls "a Rorschach test for so much that's going on in education."

Recently, the California state teachers pension fund weighed in — as a large investor in Apple, the makers of the iPhone. In an open letter, along with another activist shareholder, it called on the company to study digital distraction among youth and to make it easier to limit young people's use.

The letter cited a national survey that found two-thirds of K-12 teachers said the number of students who are negatively distracted by digital technologies in the classroom is growing. Of those teachers surveyed, 75 percent said students' ability to focus on educational tasks has decreased.

Research at the college level backs that up; a small, 2017 study at Michigan State University found students in an introductory psychology course spent up to a third of class time surfing the Web to nonacademic sites — even though they knew that the researchers were tracking their computer use.

Sounds ominous. But the debate over devices in the classroom has many more perspectives. I spoke with four professors, a high school teacher, a psychiatrist and a technologist to get a range of different views.

No way, no how

Allia Griffin teaches in the Department of Ethnic Studies at Santa Clara University in California. Her policy is simple: "Phones/devices must be turned off and not visible during class time."

Her reason is simple too: "Phones are distracting. My experience has been that no matter how invested a student may be in a class discussion or lecture, if something on their desk or in their pocket dings, rings or vibrates — they will lose focus."

And she worries about missed opportunities to socialize face-to-face. "Beyond being distracting, students also use phones/laptops/devices as objects to hide behind to avoid participating in class or interacting with their peers."

Frequently, Griffin adds, "I will walk into a classroom on the first day of the quarter and will find 30 students sitting silently in their seats and individually texting or Instagramming on their phones. This is a tragic scene. The college classroom is ... a unique space to exchange ideas and thoughts and develop the ability to communicate with a variety of people."

Katherine Welzenbach teaches high school chemistry in Overland Park, Kan. She, too, bans cellphones — and even backpacks, where phones often hide — in her classes.

These devices are worse than distracting, she says. They can connect teens to cyberbullying, hate speech, sexting and other "unhealthy" experiences.

Welzenbach is vocal about her stance, despite what she calls "shaming" of teachers like herself who take a hard line. "Teachers who see cellphones as distractions are often labeled as being 'unengaging,' " she says.

She understands the argument that teens need to learn to use the Internet appropriately. But she uses healthy eating as an analogy: Don't give kids unlimited access to "Halloween candy and Christmas cookies while they are still learning to eat a balanced diet."

Distraction has an upside

What you're really talking about when you talk about laptop bans, says Jesse Stommel, is student freedom.

"Ultimately, I see strict laptop policies (and especially blanket bans) as a form of control," explains Stommel, who directs the Division of Teaching and Learning Technologies at the University of Mary Washington in Fredericksburg, Va.

And that, he tells NPR, is a bad thing. "I don't think the attention of students is actually something teachers can or should control."

Stommel, who has been engaged in many debates over laptop bans on Twitter, calls the issue "weirdly divisive" but also, in the end, "a red herring."

Instead of an "authoritarian approach," he suggests a conversation.

"We can talk to students about attention and have them talk to us about how attention works for them," Stommel says. "This is the kind of metacognitive work that is the stuff of learning."

Distraction, he adds, can actually be a gateway to learning. It can be necessary for "peak experiences like making connections, having epiphanies, understanding abstract concepts."

There may also be times, he says, that the phone or computer can be an in-class tool. "We can also ask students to use their devices in ways that help them and the rest of the class, looking up a confusing term, polling their friends on Facebook about a topic we're discussing or taking collaborative notes in an open document."

On the other hand, says Stommel, there may be times and places to shut it down, too: "We can ask students to close their laptops at particular moments, recognizing that it is useful to learn different things, at different times, in different ways."

Catherine Prendergast, a professor of English at the University of Illinois, Urbana-Champaign, also believes that blanket bans are a bad idea. But her concern is a little different than Stommel's. She is thinking about students with special needs.

"Federal law, including the Americans with Disabilities Act, extends to protect students' classrooms," she tells NPR. "If a student needs to use a laptop as an accommodation, they have a right to do so."

But making the student ask to bring a laptop could be seen as an invasion of privacy, Prendergast says. Better to allow them for all: "The ADA enjoins us to affirmatively seek to remove barriers to education and to make our classrooms more inclusive, not less."

Some students need to be device-free

Victoria Dunckley, a Los Angeles-based psychiatrist and the author of Reset Your Child's Brain, has a different perspective. She prescribes strict limits on screen time to young people who are suffering from a variety of psychological ills. She says she has encountered "pushback" when trying to shield her patients from using devices at schools that have integrated them into the classroom.

If your students are distracted, then improve your teaching

Derek Bruff is a mathematician and director of the Center for Teaching at Vanderbilt University in Nashville, Tenn.

He says research finds that note-taking by hand can lead to better recall than note-taking by typing on a computer. The reason is that when you write more slowly by hand, you have to think through what you're hearing and put down only the most important bits; touch-typers tend to transcribe what a person is saying without doing much processing of what they're hearing.

However, Bruff adds, comparing those two scenarios misses a point that's backed up by even more research: Lecturing while someone takes notes is not a very engaging or effective mode of teaching to begin with.

"If you're going to spend 80 to 100 percent of your class time lecturing, phones are going to be distracting to students," he says.

What works much better? Getting students to collaborate and debate in small groups, for one thing. He has also seen anecdotally that "if you give students something productive and on-topic to do with their devices," it reduces idle browsing. He calls this the "Google jockey" approach.

Like Stommel, he believes there is a time and a place for laptops and phones, but also a time and place to exclude them. "Sometimes you want three students around a piece of paper."

Alanna Harvey is the co-founder and marketing director of Flipd, a phone app that limits the use of your phone. You can set a timer to lock yourself out of all functions except basic texts and phone calls.

Not long after launch, the company noticed that college students were among its biggest user base, so it began aiming the app at educators.

"Our research and discussions with customers have consistently found that digital distractions are negatively impacting the learning experience for students and educators," she says.

Harvey argues that Flipd offers a fresh, not coercive approach. Rather than instituting a ban, the company encourages professors to offer extra credit for installing the app and using it during class.

Highly engaging lesson plans, as Bruff advocates, are all well and good, but they're no match for the latest game or social network, Harvey says.

"Some of the most engaging professors I know are Flipd customers," she says. "Which I believe suggests that the problem isn't the professor, it may not even be the students, but it's the devices we know that are designed to influence and manipulate our behavior in many ways."

Bring policies in line with values

John Warner, who teaches English at the College of Charleston in South Carolina, has been on both sides of the device divide.

As recently as four years ago he had a policy of "no laptops in class, except for specific, designated activities," and banned cellphones except for emergencies. But after engaging in debates online with Stommel and others, his position shifted.

He sees himself as "more of a catalyst for learning, rather than a conduit of information." To live up to that value, he in turn needed his students to be what he calls "self-governing" over technology.

Warner says it has been working well. He has small writing classes, with about 20 students, and he almost never asks them to simply sit and take notes. "Students are doing so much in class," he says, "distraction and disruption isn't really something I worry about. They're too busy."

A previous version of this story incorrectly said a student laptop study was done at the University of Michigan. It was actually done at Michigan State University.