Accessibility links
Screen Addiction Among Teens: Is There Such A Thing? : NPR Ed The psychiatric profession is still divided, but there are treatment programs, apps and a new public campaign to address media overuse. 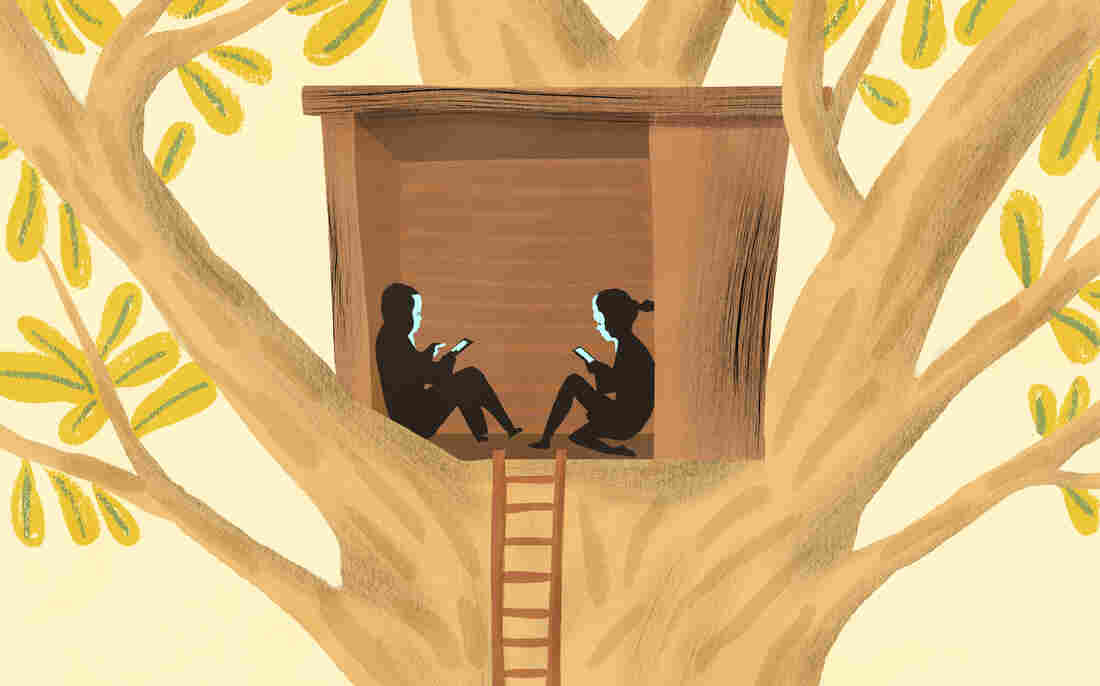 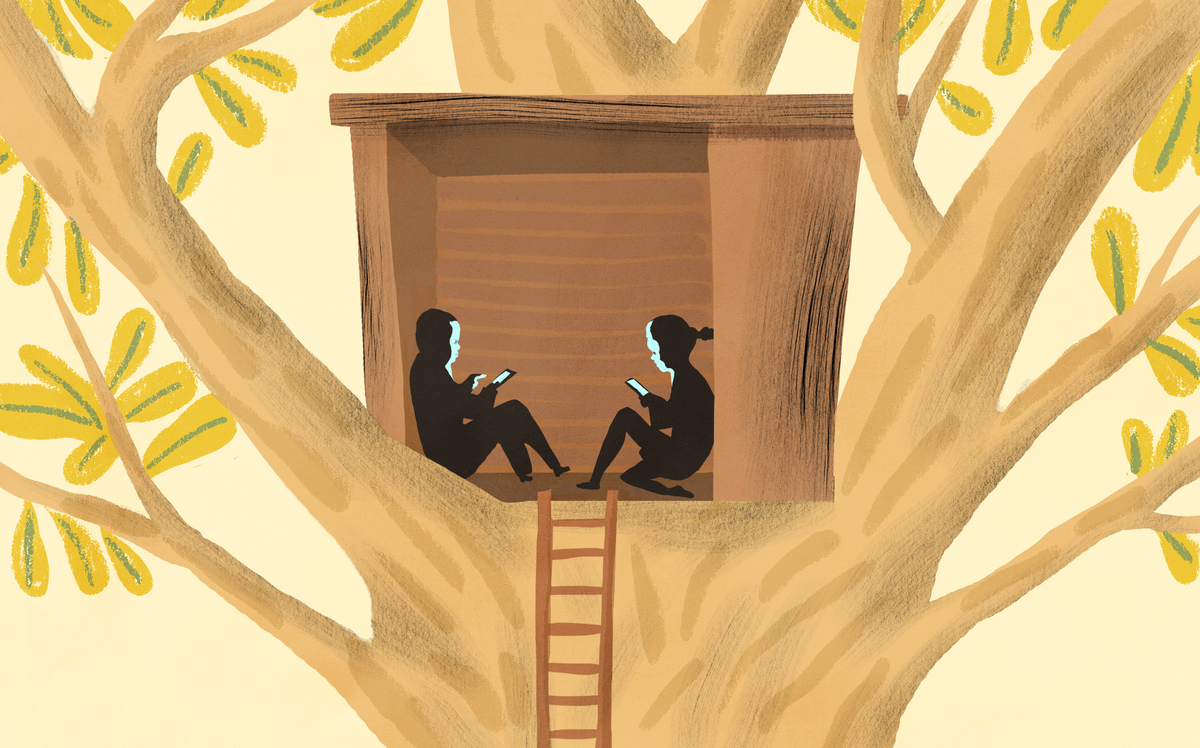 Look up from this screen right now. Take a look around. On a bus. In a cafe. Even at a stoplight. Chances are, most of the other people in your line of sight are staring at their phones or other devices. And if they don't happen to have one out, it is certainly tucked away in a pocket or bag.

But are we truly addicted to technology? And what about our kids? It's a scary question, and a big one for scientists right now. Still, while the debate rages on, some doctors and technologists are focusing on solutions.

"There is a fairly even split in the scientific community about whether 'tech addiction' is a real thing," says Dr. Michael Bishop, who runs Summerland, which he calls "a summer camp for screen overuse" for teens.

"Technology addiction" doesn't appear in the latest Diagnostic and Statistical Manual, the DSM-V, published in 2013. That's the bible of the psychiatric profession in the United States. The closest it comes is something called "Internet Gaming Disorder," and that is listed as a condition for further study, not an official diagnosis.

This omission is important not only because it shapes therapists' and doctors' understanding of their patients but because without an official DSM code, it is harder to bill insurers for treatment of a specific issue.

The World Health Organization has, by contrast, listed "gaming disorder" as a disorder due to an addictive behavior in the next edition of the International Classification of Diseases, an internationally used diagnostic manual.

Dr. Nicholas Kardaras is the author of the 2016 book Glow Kids: How Screen Addiction Is Hijacking Our Kids. When I ask him about the term "addiction" he doesn't miss a beat.

There are brain-imaging studies of the effects of screen time, he says. And he also has treated many teens who are so wrapped up in video games that they don't even get up to use the bathroom.

He says the evidence is clear, but we're not ready to face it.

"We have, as a society, gone all-in on tech," he says. "So we don't want some buzzkilling truth sayers telling us that the emperor has no clothes and that the devices that we've all so fallen in love with can be a problem" — especially for kids and their developing brains, he adds.

Addiction may not be an official term in the U.S., at least not yet. But researchers and clinicians like Bishop, who avoid using it, are still concerned about some of the patterns of behavior they see.

"I came to this issue out of a place of deep skepticism: addicted to video games? That can't be right," said Dr. Douglas Gentile at Iowa State University, who has been researching the effects of media on children for decades.

But "I've been forced by data to accept that it's a problem," he told me when I interviewed him for my book The Art of Screen Time. "Addiction to video games and Internet use, defined as 'serious dysfunction in multiple aspects of your life that achieves clinical significance,' does seem to exist."

Gentile's definition doesn't address the questions of whether media can cause changes in your brain or create a true physical dependency.

It also doesn't address the question, raised by some of the clinicians I've spoken with, of whether media overuse is best thought of as a symptom of something else, such as depression, anxiety or ADHD. Gentile's definition simply asks whether someone's relationship to media is causing problems to the extent that the person would benefit from getting some help.

Gentile was one of the co-authors of a study published in November that tried to shed more light on that question. The study has the subtitle "A Parent Report Measure of Screen Media 'Addiction' in Children." Note that the term addiction is in quotes here. In the study, researchers asked parents of school-age children to complete a questionnaire based on the criteria for "Internet Gaming Disorder."

For example, it asked: Is their preferred media activity the only thing that puts them in a good mood? Are they angry or otherwise unhappy when forced to unplug? Is their use increasing over time? Do they sneak around to use screens? Does it interfere with family activities, friendships or school?

The experts I've talked to say the question of whether an adult, or a child, has a problem with technology can't be answered simply by measuring screen time. What matters most, this study suggests, is your relationship to it, and that requires looking at the full context of life.

Though tech addiction isn't officially recognized yet in the United States, there are in-patient treatment facilities for teens that try to address the problem.

For my book, I interviewed a teenage boy who attended a wilderness therapy program in Utah called Outback.

"I started playing [video games] when I was around 9 years old," said Griffin, whose last name I didn't use to protect his privacy. He chose email over a phone interview. "I played because I found it fun, but after a while I played mostly because I preferred it over socializing and confronting my problems."

After he spent weeks hiking through the wilderness, his mother saw a lot of improvement in his demeanor and focus. However, Griffin came home to a reality where he still needed a laptop for high school and still used a smartphone to connect with friends.

Bishop, who runs therapeutic Summerland camps in California and North Carolina, says the teens who come to him fall into two broad categories. There are the ones, overwhelmingly boys, who spend so much time playing video games that, in his words, they "fall behind in their social skills." Often they are battling depression or anxiety, or they may be on the autism spectrum.

Then there is a group of mostly girls who misuse and overuse social media. They may be obsessed with taking selfies — Bishop calls them "selfists" — or they may have sent inappropriate pictures of themselves or bullied others online.

Regardless of the problem, "We feel the issue is best conceptualized as a 'habit' over an 'addiction,' " Bishop says. "When teens think about their behavior as a habit, they are more empowered to change."

Labeling someone an addict, essentially saying he or she has a chronic disease, is a powerful move. And it may be especially dangerous for teens, who are in the process of forming their identities, says Maia Szalavitz.

Szalavitz is an addiction expert and the author of Unbroken Brain: A Revolutionary New Way Of Understanding Addiction. Based on her experience with drug and alcohol addiction, she thinks grouping kids together who have problems with screens can be counterproductive. Young people with milder problems may learn from their more "deviant peers," she says. For that reason, she would encourage families to start with individual or family counseling.

Different habits demand different approaches to treatment. People who have problematic relationships with alcohol, drugs or gambling can choose abstinence, though it's far from easy. Those who are binge eaters, however, cannot. They must rebuild their relationships with food while continuing to eat every day.

In today's world, technology may be more like food than it is like alcohol. Video games or social media may be avoidable, but most students need to use computers for school assignments, build tech skills for the workplace, and learn to combat distraction and procrastination as part of growing up.

How can people, especially young people, forge healthier relationships with technology while continuing to use it every day? Some technologists believe that what has to happen is a change in the tech itself.

Tristan Harris is the co-founder of the Center for Humane Technology, an organization dedicated to pushing for more "humane" technology. A former "design ethicist" at Google, he tells NPR's Steve Inskeep that he saw the tech industry turning toward something "less and less about actually trying to benefit people and more and more about how do we keep people hooked."

In other words, as long as these companies make their money from advertising, they will have incentive to try to design products that maximize the time you spend using them, regardless of whether it makes your life better. Harris' solution is to pressure the industry to turn to new business models, such as subscription services. "We're trying to completely change the incentives away from addiction, and the way to do that is to change the business model."

Along with Common Sense Media, a nonprofit that offers parents research and resources on kids' media use, they are currently launching a "Truth About Tech" campaign that Harris compares to anti-smoking campaigns exposing the workings of Big Tobacco.

For over a decade Gabe Zichermann was a self-described "cheerleader" for what's called "gamification." He consulted with the world's largest corporations and governments on how to make their products and policies as compelling as a video game.

But, he says, "there was a moment I realized that things had gone too far." He was in a restaurant and looked around and saw "literally everyone was looking at their phones." Zichermann started thinking about his family history and about his own relationship to technology.

He realized that his work up to that point had been contributing to some serious social problems. Like Harris, he is concerned that in a world of ubiquitous and free content, platform- and device-makers make more money the more time you spend on screens.

This, he says, results in "a ton of compulsive behavior" — around everything from pornography to World of Warcraft to Facebook. Feeling "partially responsible," Zichermann set out to create an anti-addiction app.

It's called Onward, and it has a number of different features and approaches in both free and paid modes.

It can simply monitor in the background and give you a report of your use, which for some people, says Zichermann, is enough to motivate change. Or it can share that report with someone else — say, a parent — for accountability (the app is rated for use by 13-year-olds and above).

Or, say you want to stop browsing Facebook during business hours. The paid mode of the app allows you to block Facebook, but it can also monitor in the background to try to predict when you might be about to surf there. "The idea is that when the drink is in your hand, it's too late," says Zichermann.

In that moment, the app serves up an intervention like a breathing exercise, or an invitation to get in touch with a friend. Zichermann calls this "a robot sitting on your shoulder — the angel of your good intention."

The company has partnered with both UCLA Health and Columbia University Medical Center to research the efficacy of the app, and Zichermann says they plan to seek FDA approval as a "digiceutical."

In essence, Zichermann is trying to gamify balance — to keep score and offer people rewards for turning away from behavior that's become a problem.

The word "addiction" may currently be attracting controversy, but you don't need a doctor's official pronouncement to work on putting the devices down more often — or to encourage your kids to do so as well.