Accessibility links
Should The Parkland Shooting Change How We Think About Phones, Schools and Safety? : NPR Ed Security experts say allowing students to have their phones with them during the school day is unlikely to make anyone safer. Maybe even the opposite.

Should The Parkland Shooting Change How We Think About Phones, Schools and Safety?

Should The Parkland Shooting Change How We Think About Phones, Schools and Safety? 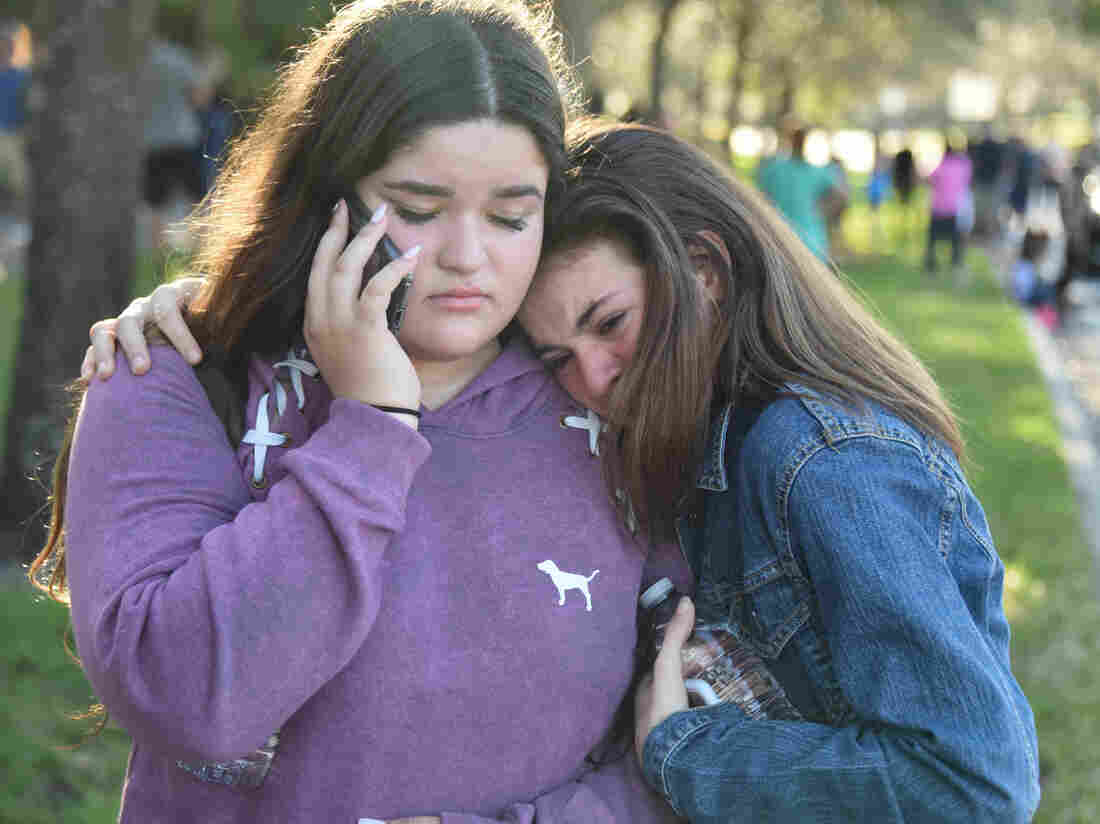 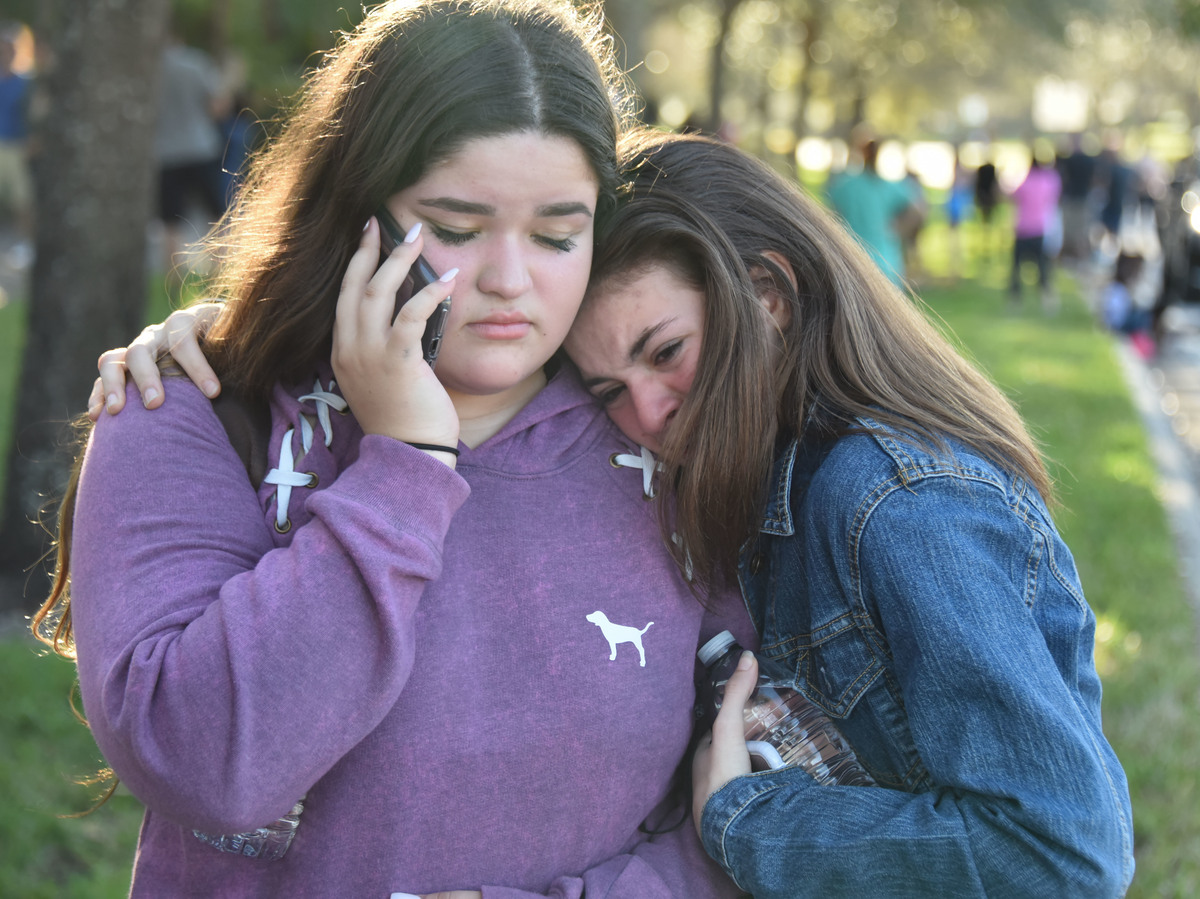 Students use their phones following the shooting at Marjory Stoneman Douglas High School in Parkland, Fla.

While Marjory Stoneman Douglas High School was on lockdown, with an active shooter in the building, students were on their phones.

They were tweeting. They were posting on Snapchat and sending videos to friends and family. They were calling their parents to let them know they were safe and texting classmates to find out if they had survived.

Some of those posts may become evidence in the case of Nikolas Cruz, who has, according to court documents, confessed to the killing of 17 students and school personnel. This visceral record of the horrifying events of Feb. 14 is helping motivate a new conversation about gun control.

And we can only imagine the relief of the families who learned, in the moment, that their children were alive.

According to Education Week, "One girl was so emotional and overwhelmed that she handed her phone to her teacher, who reassured her mother: 'They're well taken care of. We're secure. No one is going to come in here. I will make sure that these children will be fine.' "

But do smartphones in students' hands really make schools safer? Or do they just make them feel safer? And could there be a cost to that feeling?

Ken Trump has been a school security consultant for 30 years. When he started, pagers were pretty much the only devices carried by students, and those were often associated with drug dealing or gang activity. With the advent of cellphones and then smartphones, "I was originally: No. Period," from a security standpoint, he says. But now, "the reality is, the horse is out of the barn."

That does seem to be the case. As of 2015, the Pew Research Center reported that 73 percent of teenagers had smartphones. As the devices have become more common, and among younger and younger students, schools seem to have thrown up their hands.

NEA Today, the publication of the National Education Association, reported in 2016 that 70 percent of districts across the country that had once banned student phones reversed themselves and now allow them.

This is, in part, because of parents who plead that they need to reach students during the day to ensure their safety.

Daniel Domenech, executive director of the American Association of School Administrators, told NPR that in general, the organization advises school districts to let students have phones on them during the school day. "You can see the advantage of being able to communicate easily" in light of the Parkland shooting, he said.

Is There Any Way For Schools To Prevent Shootings?

Randi Weingarten, president of the American Federation of Teachers, the nation's second largest teachers' union, tells NPR in an email: "Every day, but especially in a crisis, cellphones give parents peace of mind. The reality is that kids need access to cellphones to get to and from school safely and to let parents know they're OK." While districts should be free to make their own rules, Weingarten says, "we must recognize cellphones as an essential safety and security tool."

Safety. Peace of mind. It makes deep, intuitive sense. But there may be more to the story.

Ken Trump, the security expert, says phones can actually make us less safe in a crisis such as the one in Parkland. He ticks off several reasons:

"Without a doubt, the cellphones provide an emotional security blanket for parents and kids," Trump says. As a father himself, "I get that, my heart is there."

And he acknowledges that in some cases, in the hands of responsible parties, phones might help keep people safe. That same Education Week story found that while in lockdown, a teacher at Marjory Stoneman Douglas, Jim Gard, coordinated with other teachers over email and asked his students to text classmates to make sure people were accounted for.

Nevertheless, says Trump, the weight of the evidence is against having free access to phones in a crisis. "I'm in a rare position professionally where I understand the downsides of it."

But schools, and school leadership, aren't necessarily seeing those downsides. Maybe that is because there is no one federal agency responsible for disseminating information or training on security and crisis procedures for schools, including on the use of phones. The Departments of Education, Health and Human Services, Homeland Security and Justice all offer resources but take a "piecemeal" approach, according to a 2016 report by the Government Accountability Office.

On a normal day, the debate over smartphones in the classroom is about student distraction vs. potential boons to learning. The more typical way they become a safety issue is if students are using them to bully or threaten one another. But some of the policies that schools are adopting to try to mitigate the negatives while preserving the positives of phones may also help in an emergency.

For example, there is a company called Yondr that markets a patented locking pouch for phones. It's in use by schools, concerts and events. The company's own research concurs with Trump's findings about the downsides of having general and unlimited access to phones in an emergency. In response, their system allows for teachers and other responsible parties to control access to the phones without making them entirely inaccessible.