Accessibility links
Dolly Parton's Imagination Library Delivers 100 Millionth Book : NPR Ed In 1995, the entertainer and philanthropist started the Imagination Library, inspired by her father, who couldn't read and write. Now, it mails free books to more than a million kids each month. 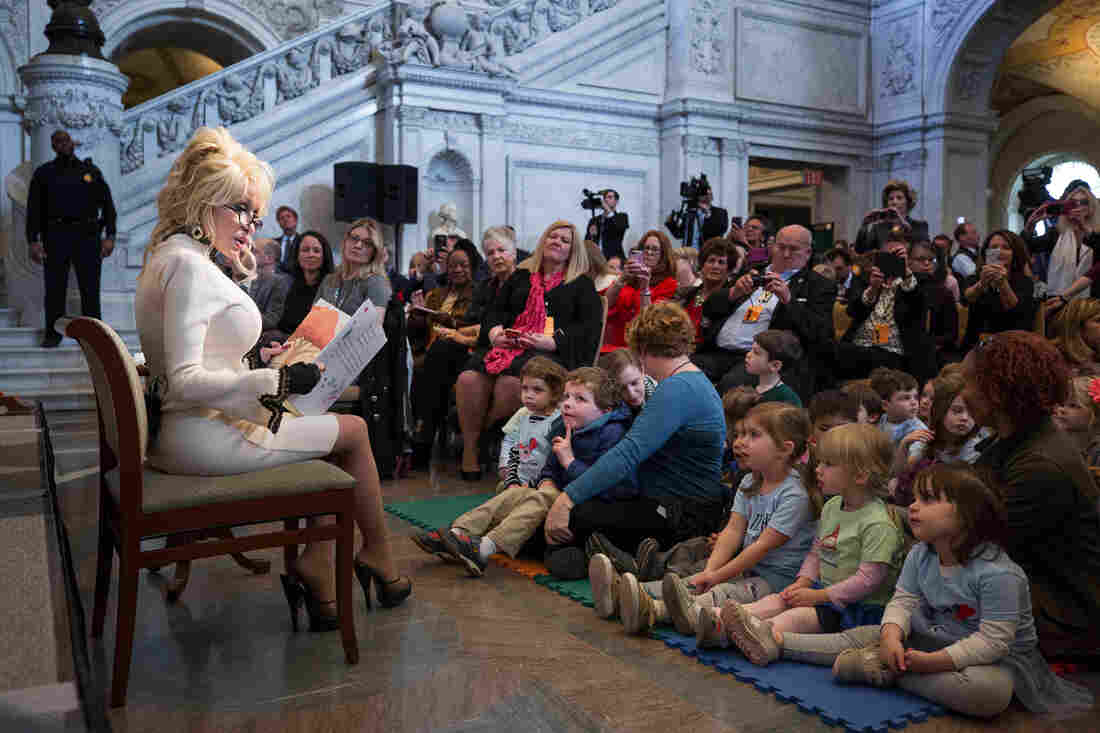 Dolly Parton reads Coat of Many Colors, a children's book based on one of her signature songs, to a group of children at the Great Hall of the Library of Congress in Washington, D.C., on Tuesday. Shawn Miller/Library of Congress hide caption 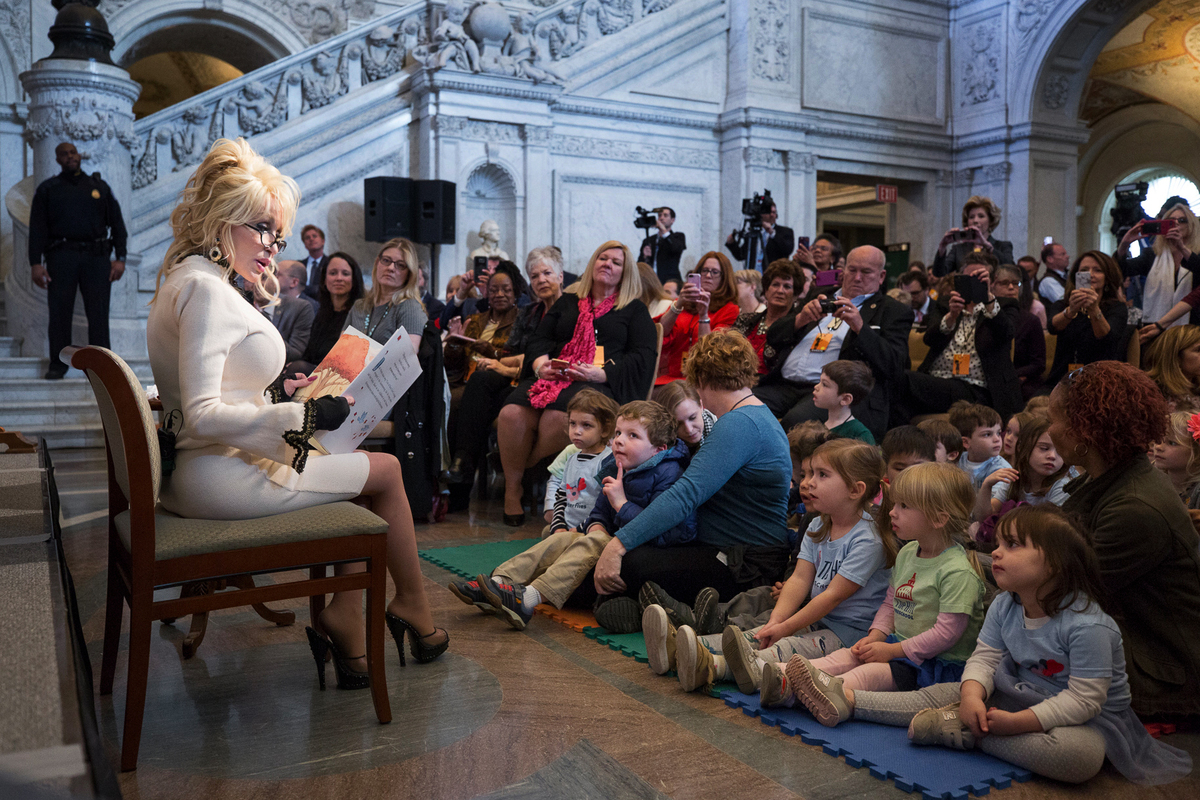 Dolly Parton reads Coat of Many Colors, a children's book based on one of her signature songs, to a group of children at the Great Hall of the Library of Congress in Washington, D.C., on Tuesday.

The Library of Congress hosted a very special guest at story time this week:

The country music legend is also a champion of early childhood literacy, through her Imagination Library. Every month, the nonprofit program mails a free book to more than a million children — from infants to preschoolers.

Parton visited the Library of Congress on Tuesday to celebrate a major milestone in the Imagination Library's history: delivery of its 100 millionth book. Not bad for a program Parton founded more than two decades ago as a small, local effort to help kids in her native Sevier County, Tennessee.

"We never thought it would be this big," she told NPR in a quiet, wood-paneled room off the library's Great Hall. "I just wanted to do something great for my dad and for my home county and, at the most, maybe a couple of counties over. But then it just took wings of its own, and I guess it was meant to be."

Parton's inspiration for the Imagination Library was deeply personal: her father, Robert Lee Parton. Like many people of his generation, he began working at a young age to help support his family.

"My dad didn't get the chance to go to school. And Daddy couldn't read and write, and that was kind of crippling to him," Parton said. "He was such a smart man, though. He just had such good common sense. They call it horse sense in the country."

"But Daddy thought it was just something he couldn't learn after he was grown, so he never tried to learn to read and write. And that was just kind of embarrassing to him," she continued. "But I didn't want Daddy to feel embarrassed."

Parton was determined to give the children of Sevier County something her father never had: early access to books. She started the Imagination Library in 1995, and involved her father, too. He was able to see the program take off before he died in 2000.

"He got to hear the kids call me 'The Book Lady.' He got a big kick out of that," she said. "But he took great pride and felt like he'd helped do something special." 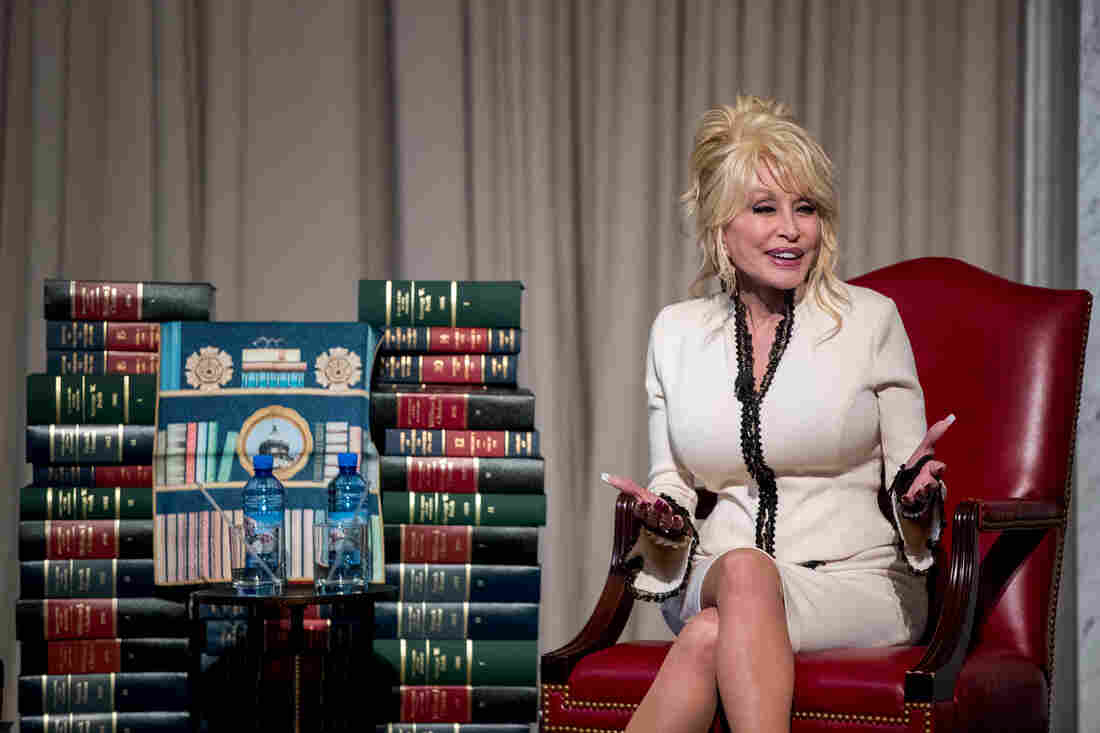 Parton donated a copy of Coat of Many Colors to the permanent collection of the Library of Congress to mark the delivery of the 100th million book by her nonprofit Imagination Library. Andrew Harnik/AP hide caption 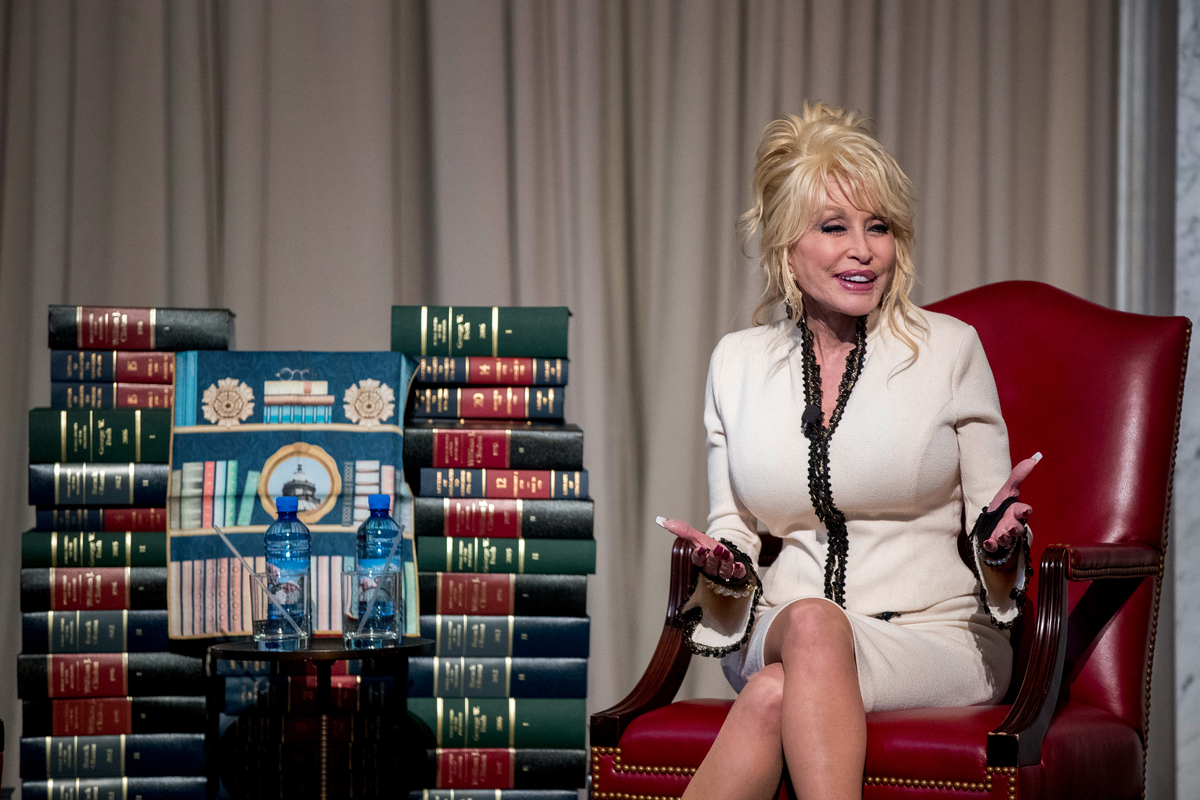 Parton donated a copy of Coat of Many Colors to the permanent collection of the Library of Congress to mark the delivery of the 100th million book by her nonprofit Imagination Library.

From its modest roots in eastern Tennessee, the Imagination Library has grown to reach children in all 50 states and the District of Columbia, as well as Canada, Australia and the United Kingdom.

The program is available in communities where a local partner has teamed up with the Imagination Library. Those partners could be nonprofits, state agencies or a public library system, for instance. Any child from birth to 5 — before they head off to kindergarten — is eligible. Local partners pay about $25 per child per year, an amount that covers the cost of the book and shipping.

A panel of educators and reading specialists picks books that are developmentally appropriate for each year of a child's life.

In Washington, D.C., on a recent evening, Uretta Todd and her 4-year-old son, August, read Old Bear and His Cub, one of the books they've received from the D.C. Public Library's partnership with the Imagination Library, Books from Birth.

Todd says her son loves getting his book in the mail every month: It's personal, it has his name on it, and it comes straight to their home.

She also loves the range of books.

"It exposes us to books we wouldn't have necessarily picked out," she says. Some examples include a bilingual English-Spanish version of Just One More or Dolly Parton's children's book, I Am A Rainbow, which uses colors to help kids talk about their feelings.

Across the country, in Anchorage, Alaska, 5-year-old Jack Price just graduated from the Imagination Library program.

"I have read to my son almost every day of his life," says his mother, Natasha Price, who signed up for the Imagination Library in the hospital when her son was born.

Price says she appreciates how the books come with suggestions for parents on how to engage with the words beyond the page, with questions and activities.

"Maybe it's been a long day and I can't really think of the right questions to ask, and they have these really great prompts at the back of every book," she says.

Getting the books each month became "a really wonderful custom in our family," she says. "It was sad when we got our last book, which was about being ready for kindergarten, because we wouldn't get any more books in the mail."

Now that Jack has started kindergarten, Price says she sees "a direct correlation between reading to him every day and his reading comprehension skills."

And the science backs her up. The human brain develops rapidly during the first few years of life. And studies have found that reading out loud to a child not only promotes literacy and a love of reading, but also has lasting cognitive and educational benefits.

"If you can read, even if you can't afford education, you can go on and learn about anything you want to know. There's a book on everything," she said. "So I just think that it's important for kids to be encouraged to read, to dream and to plan for a better life and better future."

And Parton's ambitions for the Imagination Library don't stop with 100 million books.

"We're going for a billion, maybe, in my lifetime," she said, with a delightful Dolly laugh. "I'm a big dreamer, you know."