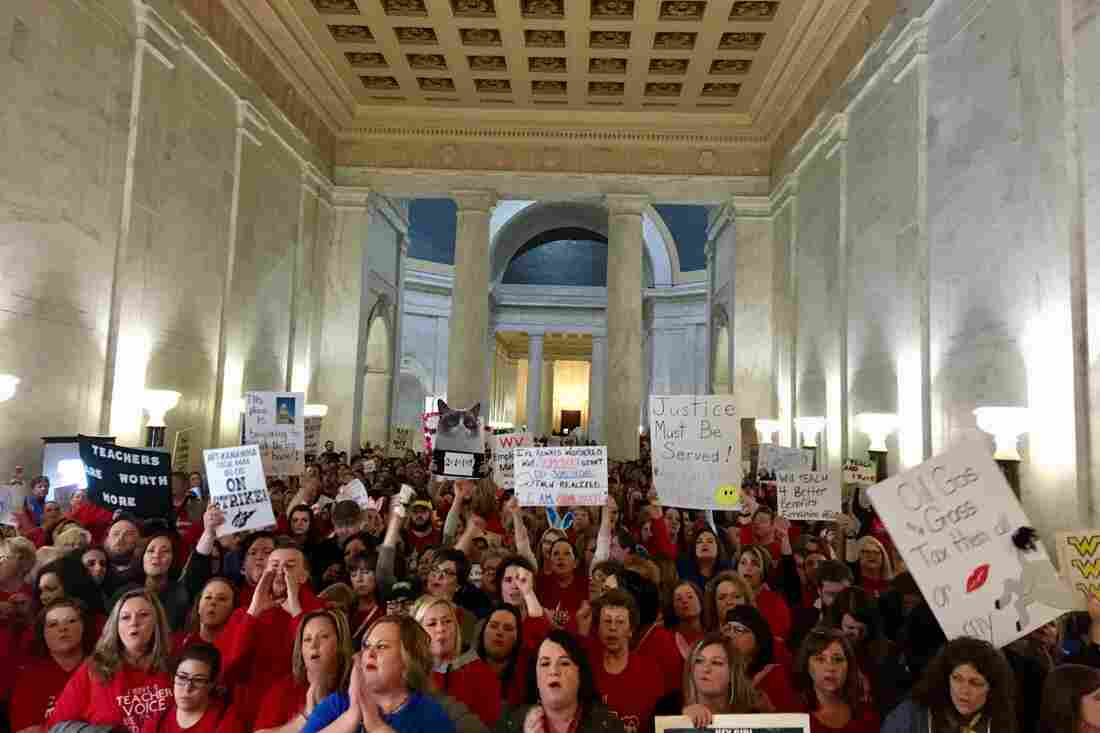 Thousands of teachers rally at the state Capitol in Charleston, W.Va. Teachers went on strike over pay and benefits. John Raby/AP hide caption 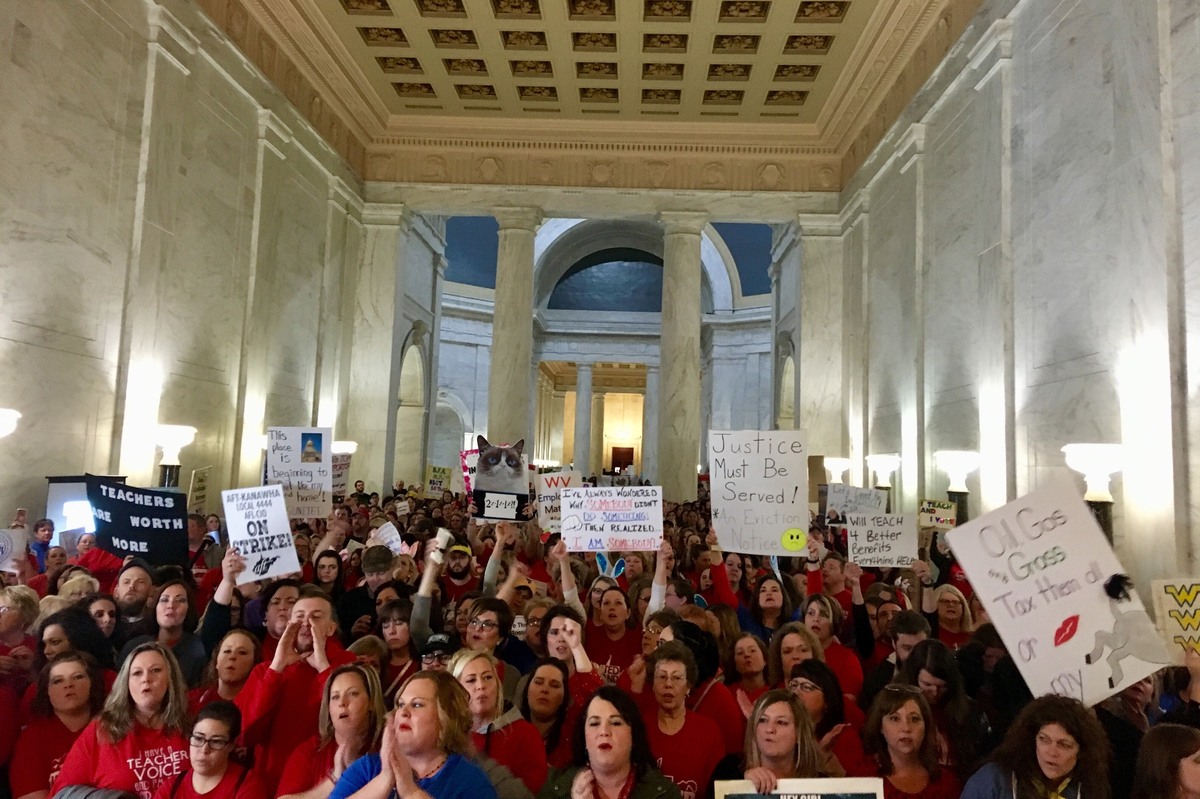 Thousands of teachers rally at the state Capitol in Charleston, W.Va. Teachers went on strike over pay and benefits.

Thousands of West Virginia's public school teachers and school employees remained off the job Friday in a strike that began last week. Union leadership had called for an end to the strike when the governor announced a 5 percent pay increase. But public schools remained closed in all 55 counties as legislators scrambled to meet teachers' demands for a fix to health benefits.

According to an internal draft memo, Education Secretary Betsy DeVos believes the nation's student loan servicers should be protected from state oversight that may be far tougher than federal law. The memo was first reported by Bloomberg and marks just the latest move by the Trump administration to apparently side with debt collectors over borrowers.

This new document, a "notice of interpretation," has not been released. But it appears to argue that the Department's student loan contractors should be protected from state regulation — and, conceivably, from state lawsuits.

The companies that service America's $1.4 trillion in student loan debt drew 17,175 complaints in 2017. Of those, 62 percent were against Navient, the biggest of the servicers, according to a just-released analysis by the independent Student Loan Report.

Anticipating such a policy shift from the Trump administration, a bipartisan group of 26 state attorneys general, who are pursuing various regulatory actions and lawsuits against these servicers, wrote a letter to DeVos in October:

"There is no principled reason for the Department to weaken or box out states just as our combined federal-state efforts against abusive practices in the student loan servicing industry have begun to bear fruit," the attorneys general wrote. "Nor is there any justification to seek to interfere with the traditional police power of states to protect their own residents from abuses in the marketplace."

The Supreme Court this week heard oral arguments in the case Janus v. American Federation of State, County, and Municipal Employees, Council 31. At issue is whether public employees who do not belong to a union, but who are covered by collective bargaining agreements, can be compelled to pay fees. If the court says no, the unions could lose a lot of money.

The court deadlocked 4-4 over a similar case in 2016, following the death of Justice Antonin Scalia. Janus is being closely watched in the education world, according to SCOTUSblog, which covers the Supreme Court. Both Education Secretary Betsy DeVos and American Federation of Teachers President Randi Weingarten attended arguments this week.

#ArmMeWith ... something other than guns, teachers say

In the wake of the Parkland school shooting, President Trump and the gun lobby have called for putting guns in the hands of teachers.

In response, some teachers on Twitter are using the hashtag #ArmMeWith to ask for other resources instead, such as additional school counselors and supplies.

There are lots of everyday ways to nurture a young child's interest in science, from taking a walk in the park to cooking together, to trying out an app or video. Yet, while almost all parents of children ages 3-6 do daily learning activities with their children, only about half include science-related activities. That's the finding of a national survey from two nonprofits, the Education Development Center and SRI International. More than 70 percent of parents surveyed were confident in their ability to shape a child's growth in the areas of reading, math and social and emotional skills; but just over half felt confident doing the same with science.

Alberto Carvalho accepted an offer Wednesday to become chief of the nation's largest public school system. On Thursday, he changed his mind. Carvalho has a strong track record of student achievement as the superintendent of Miami-Dade County Public Schools for nearly 10 years. The public reversal, many observers say, will make it harder for New York City to find a leader after current Chancellor Carmen Farina departs.

Some money for storm-ravaged schools

School systems hit hard last year by several natural disasters are about to get a boost from Washington. The Education Department has announced additional money to help schools rebuild and restart.

The money — $2.7 billion — is part of the budget deal passed last month, and it will go to school districts that are still struggling to recover from hurricanes Maria, Harvey and Irma as well as California's wildfires. For context, $2.1 billion is the annual budget of the Houston school district, just one of the systems affected.

In addition to storm-hit locations like Puerto Rico, Alabama and the U.S. Virgin Islands, districts that have taken on displaced students will share the cash. It's worth noting, the announcement from the Department also made clear that the money isn't just for traditional public schools; it can also be spent on charter and private schools.

The news comes at a particularly tough time for Puerto Rico. Many schools there are still without power and thousands of students have left for the mainland. Earlier this year, leaders also announced a plan to close roughly a quarter of the island's public schools.