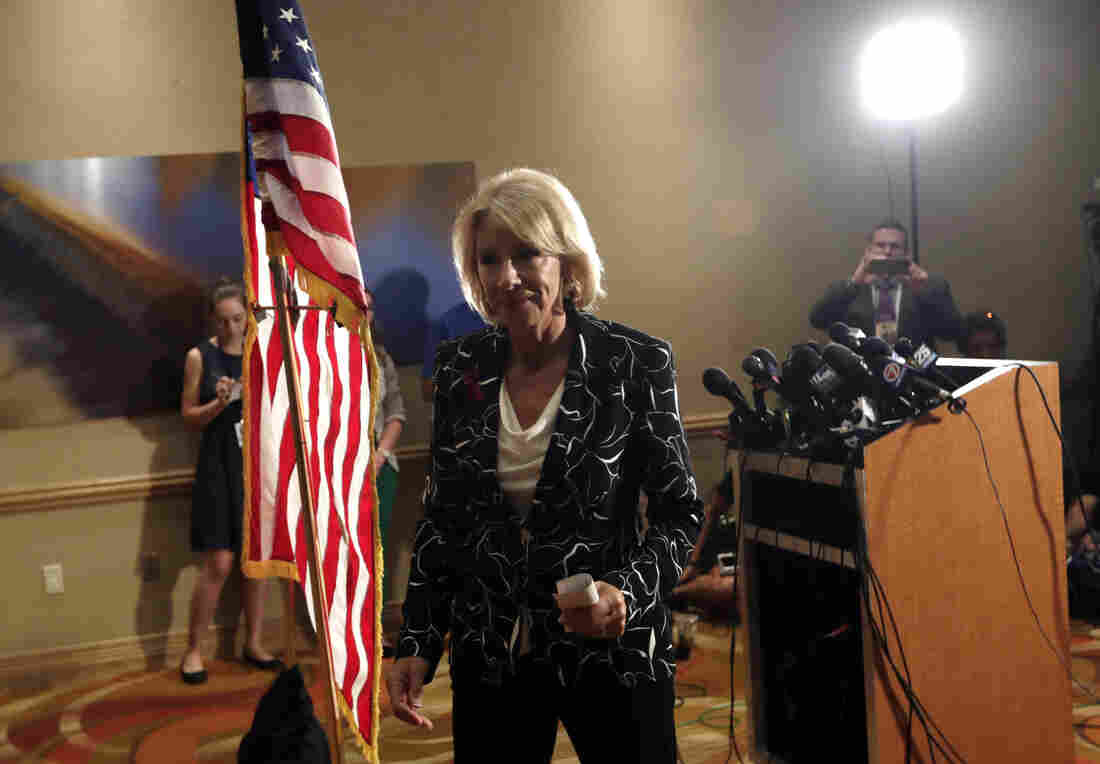 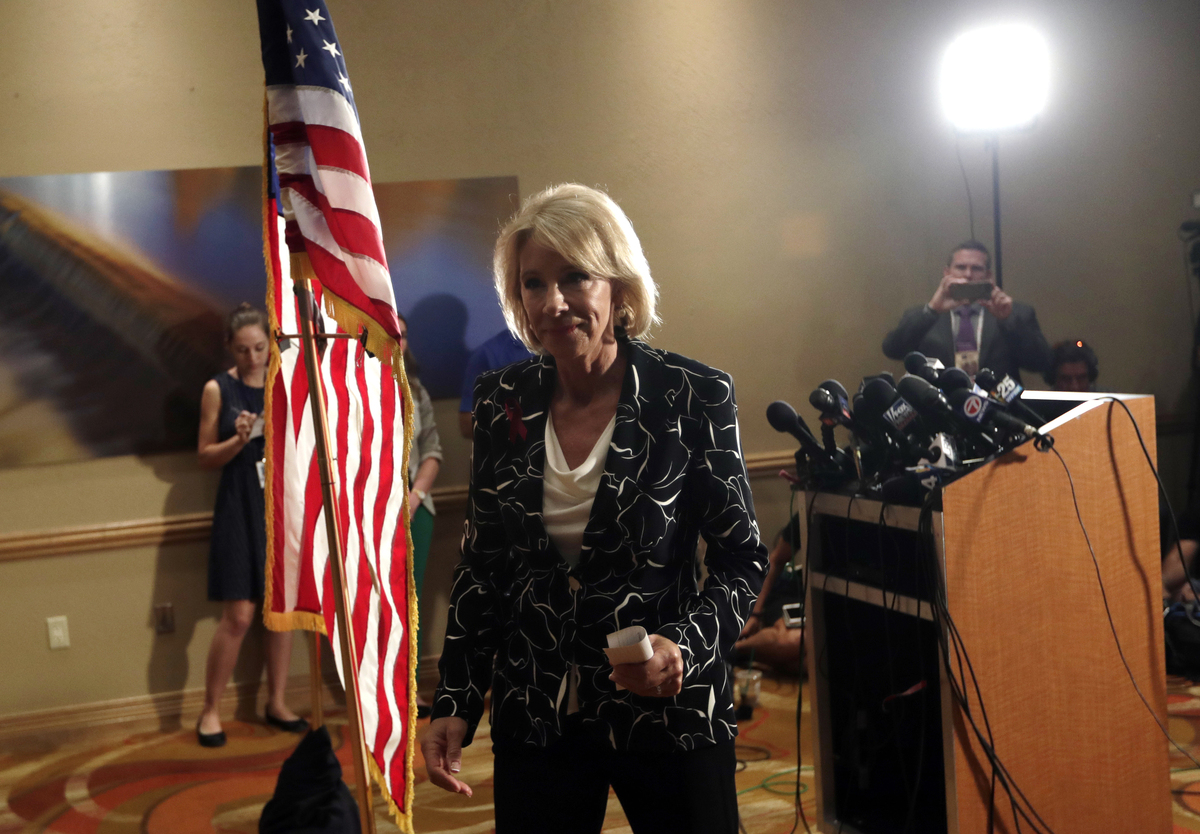 Welcome to our weekly roundup of education news! Let's get going.

On Tuesday, Education Secretary Betsy DeVos tweeted a black-and-white photo of a classroom taken decades ago next to a modern stock photo of a classroom. "Does this look familiar?" the tweet began. In both pictures, desks were lined up in straight rows, facing a teacher standing at the front of the classroom.

Does this look familiar? Students lined up in rows. A teacher in front of a blackboard. Sit down; don’t talk; eyes up front. Wait for the bell. Walk to the next class. Everything about our lives has moved beyond the industrial era. But American education largely hasn’t. #SXSWEDU pic.twitter.com/kyy2r7bTud

The tweet got 4,500 responses. Many teachers replied with contrasting pictures of their own classrooms, highlighting group work, creative projects, independent reading and more.

No. It doesn't look familiar. THIS is what public school looks like. pic.twitter.com/OYYrXvIRq2

Actually, your stock photos looks unfamiliar. In my classroom, and many others (that you probably don’t know about) students are the agents of their own learning and often are the ones up in front of the class teaching and learning with each other. pic.twitter.com/M02YzBBMmJ

Later that day, DeVos appeared in Austin at SXSW EDU, an educational conference. She hosted a panel on innovation in higher education at which some audience members noticed one glaring absence: any educators. Instead, the panel featured leaders from edX, Strada Education Network and Whiteboard Advisers, all education-related companies, according to reporting from EdSurge.

On Wednesday, DeVos traveled to Parkland, Fla., to visit Marjory Stoneman Douglas High School. There, she met with staff and survivors of the February shooting, including members of the student newspaper, the Eagle Eye, to offer her condolences. Some students were decidedly unimpressed with her visit, a sentiment they voiced on Twitter.

Secretary of education Betsy Devos spoke to me and only a hand full of students. She did not properly answer my only question. She did not sit down with any students and asked what we wanted. Douglas has 3,000 students. None of them were invited. pic.twitter.com/1RXYDZJtTb

Betsy Devos came to my school, talked to three people, and pet a dog. This is incase the press tries to say something else later

Students were clearly more impressed when basketball star Dwyane Wade of the Miami Heat stopped by the school.

Can @DwyaneWade be the new secretary of education? https://t.co/8T3NoJegBx

After nine days of statewide school closures, West Virginia lawmakers reached a deal with the teachers' union on Tuesday to end the teachers' strike. Gov. Jim Justice signed a measure to raise pay for all state employees, including teachers, by 5 percent. West Virginia Superintendent of Schools Steven Paine told teachers on Thursday that the missed school days would need to be made up.

The strike in West Virginia could be one of many this year. Educators in Oklahoma are planning walkouts if a new state education budget that includes pay raises isn't passed on April 1.

Richard Carranza, who previously led the schools in both Houston and San Francisco, will serve as the next chancellor of New York City schools. Carranza began his education career as a history teacher in Tucson, Ariz. His tenure in San Francisco was "largely free of controversy," according to the San Francisco Chronicle. There, he focused on increasing equity, reducing suspensions and protecting the city's immigrant students. He led Houston schools' recovery from Hurricane Harvey, but now leaves that system in what the president of the Houston Federation of Teachers called a "highly volatile and unstable year."

Last week, Miami school superintendent Alberto Carvalho backed out of the job at the press conference planned to announce his departure from Miami.

Last week, the Chronicle of Higher Education published a lengthy investigation into Harvard professor Jorge Domínguez's history of alleged sexual harassment. Ten women told the Chronicle that the government professor made them feel uncomfortable. After the article was published, more came forward to make allegations about his behavior. The university then placed Domínguez on administrative leave, and on Tuesday, the government professor resigned.

Allegations that he made women feel uncomfortable span from 1979 to 2015.

Scholars at Harvard and Massachusetts Institute of Technology have announced a five-year collaboration targeting what they call the "early literacy crisis" in the United States. The program, called Reach Every Reader, will capitalize on the universities' combined expertise in cognitive science and learning. Experts will start by developing an online diagnostic screening used to identify young children at risk for reading difficulty, then work with schools and families to help those students learn to read in the ways that work for each of them individually. The hope is that these "personalized interventions" will help students leverage their own skills in the classroom.

Priscilla Chan, a pediatrician, and her husband, Facebook founder and CEO Mark Zuckerberg, will fund the program.

According to data from the Centers for Disease Control and Prevention, about 5 percent of teachers have been attacked by a student. Nine percent are the target of threats. But many of those teachers don't tell anyone. That's according to a new nationwide study published in the journal Social Psychology of Education this week. Researchers found that almost 20 percent of teachers who go through such experiences don't tell anyone, even their school administrators.