Accessibility links
A Rocky Appearance For Betsy DeVos On '60 Minutes' : NPR Ed The controversial education secretary repeated her support for arming teachers and appeared unable to answer some questions about schools in her home state, in the 13-minute interview. 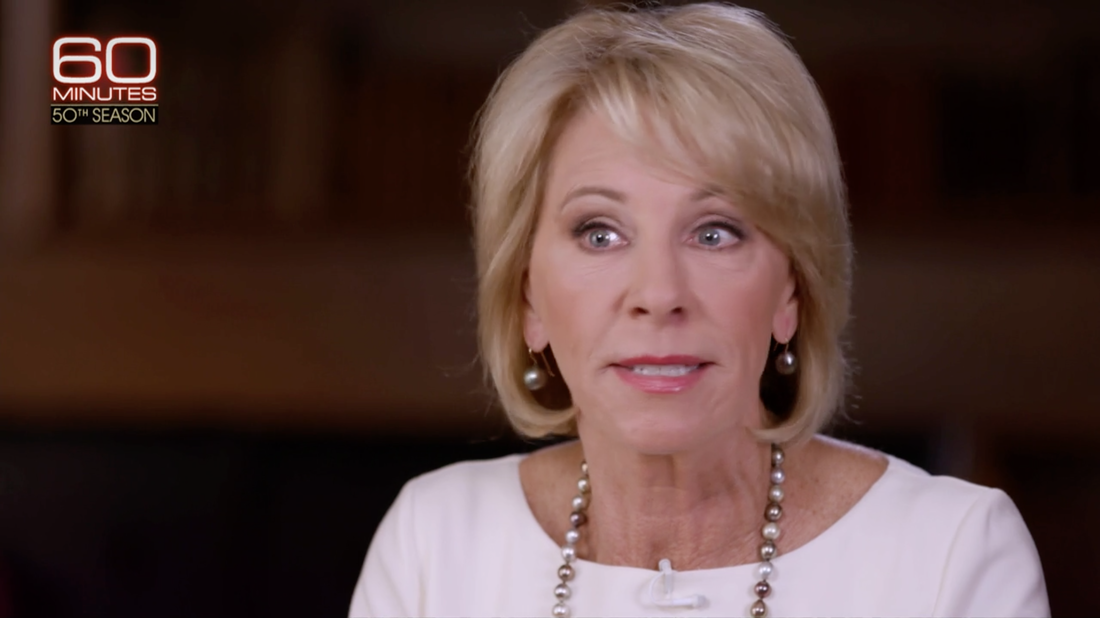 "Why have you become, people say, the most hated Cabinet secretary?" Lesley Stahl asked Education Secretary Betsy DeVos in a 60 Minutes interview that is drawing lots of attention.

"I'm not so sure how exactly that happened," DeVos responded in the interview, which aired Sunday night on CBS.

Inside The Virtual Schools Lobby: 'I Trust Parents'

DeVos rarely gives interviews outside outlets like conservative radio host Hugh Hewitt. But she had some news to discuss. Sunday, President Trump named her head of a new commission on school safety in response to the Parkland shooting.

That appointment came after yet another example of the controversy that has marked her tenure as secretary: a visit by DeVos to Marjory Stoneman Douglas High School last week that was angrily criticized by some students on social media.

"I give a lot of credit to the students for raising their voices," DeVos told Stahl.

DeVos responded: "They want a variety of things. They want solutions."

During her confirmation hearing last year, DeVos memorably supported the idea of arming teachers — perhaps against grizzly bears, she joked.

She reiterated that support Sunday night, in line with Trump's support for the idea: "It should be an option for schools to consider. ... No one size fits all."

Educators, teachers unions and some policy experts have been critical of the idea. A new working paper from Johns Hopkins argues this would be both risky and ineffective.

The 13-minute segment had several uncomfortable moments. DeVos often seemed at a loss for words as Stahl probed many of the most controversial points in her brief career as secretary: her faux pas about historically black colleges; the rollback of Obama-era transgender student protections, Title IX sexual assault regulations on campuses, and efforts to reduce racial disparities in school discipline. And, of course, her support for school choice, as pursued through vouchers and charters.

DeVos is the wealthiest Cabinet member, the segment pointed out. Her family's investments have included K12 Inc., a for-profit virtual school company.

Stahl questioned DeVos on her decades of philanthropic intervention in the school system in Michigan, where her family has promoted a free market approach to school choice, including for-profit operators of charter schools that receive taxpayer funding.

Studies have found poor performance, particularly in Detroit. Asked whether public schools in Michigan have improved, DeVos answered: "I don't know. Overall, I can't say overall that they have all gotten better."

"Have you seen the really bad schools?" Stahl persisted. "I have not intentionally visited the schools that are underperforming," DeVos answered.