Accessibility links
Teachers And Those Magical OK Go Videos: A Match Made In Science? : NPR Ed If you're a rock band, and thousands of teachers and students are using your hugely popular music videos in the classroom, why not help them out? 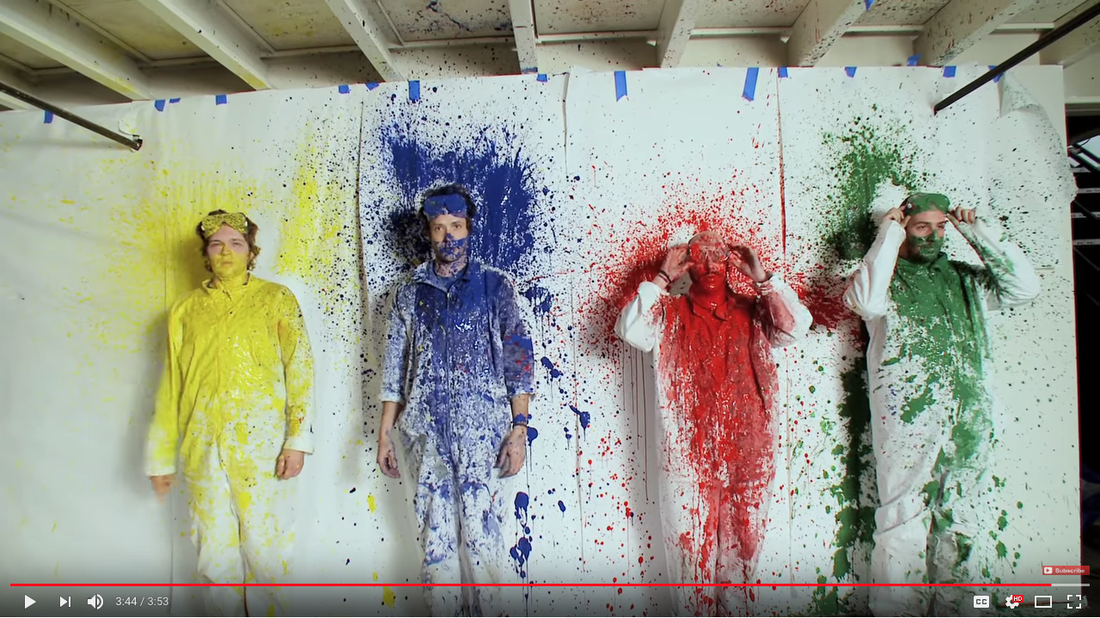 Teachers are using OK Go videos — like This Too Shall Pass — to teach students about science and math concepts. YouTube/OKGo hide caption Teachers are using OK Go videos — like This Too Shall Pass — to teach students about science and math concepts.

If you've ever gone down the rabbit hole that is OK Go's YouTube channel, then you know how insanely cool the band's music videos are.

Sure, OK Go is a rock band. Their songs get on the radio, they've played sold-out shows, but the group is far better known for their really complex and elaborate videos.

There's the one (viewed 41 million times) where they're all dancing on treadmills, jumping back and forth in time to the music. Another (12 million views) where the band is flying — and singing and dancing — in an anti-gravity plane; they open a box of balls and the little spheres just float through space, suspended in air.

All those millions of viewers? It turns out many of them are teachers and their students.

"I subliminally brainwashed my kids into being OK Go fans," jokes Jennie Magiera, who taught in Chicago's public schools for 10 years. "The music videos are viral, and you watch them and you're like, 'How did they do that?' "

And, as any teacher knows, when kids are curious, it makes them eager to learn.

Magiera points to the video for "Here It Goes Again" — the one with the treadmills. It became a staple in her middle school math classes.

The band — and its publicist — have been fielding requests for years from teachers who want use their videos in their classrooms.

"I think every band is kind of surprised to find who their audience turns out to be," says Damian Kulash, OK Go's lead singer. "Definitely not how you start out a rock band, going, 'Let's teach!' "

And yet, backstage at concerts, he and the other band members are constantly meeting and hearing from these teacher fans, and their students. Kulash says he's met kindergarten teachers and college professors using the same videos, for very different ages.

Teachers I talked with say they weave the band's videos into lessons about science, math and art — introducing concepts like gravity, transfer of motion, perspective, quadratic equations, parabolas and the importance of failure and persistence.

And, says Janet Moore, it puts a cork in that perennial question math teachers get: When am I ever going to use this? Moore is a professor at the University of Illinois, and gets that question a lot. She teaches math for non-math majors.

She also leads professional development workshops for other teachers, outlining how they, too, can use OK Go in their classrooms.

The one that really gets them excited, she says, is the video set to the song "This Too Shall Pass."

Any teacher watching this incredible 4-minute Rube Goldberg machine can find lessons in there. There are cascading dominos, rolling marbles building momentum, a tire flips electrical circuits, which turns on lamps, a guitar with spoons plays notes on water glasses, perfectly timed to the instrumental break. A piano smashes to the ground, a TV gets destroyed — and that destructive force eventually results in the band members getting splattered with paint.

"It's a great introduction to energy concepts," says Moore. "It sparks inquiry, it sparks curiosity."

As science standards shift away from "downloading information to students brains," she adds, towards understanding concepts, these videos can have lasting resonance with students.

"Anyone can understand math and science concepts," she says, "and when you understand them, you can see the world around you differently."

The band, lead singer Kulash admits, are "nerds themselves." And eventually, they saw a way to turn all this interest into an opportunity: "Is there some way that we can make that journey easier for them?"

That question led the band to partner with the Playful Learning Lab at the University of St. Thomas in Minnesota.

"Sometimes folks who don't have experience in education have a great idea, but it doesn't really translate to what it's like to be in a room with 27 8-year-olds," explains AnnMarie Thomas, the lab's founder and director. It was her team's job to merge the band enthusiasm with pedagogical, research-based ideas.

"You're not gonna send your second-grade class up in zero-gravity, or put them in a stunt car to drive around making a giant instrument," Thomas explains. So the question becomes, "How can we take these messy, really expensive concepts and give an authentic engaging experience for kids?"

She started by surveying more than 600 teachers. Educators told them they wanted three main things from such a collaboration: classroom materials, challenges and assignments, and access to the band.

What they came up with? It's called OK Go Sandbox, a free website with educator guides that include material lists, assignments and suggested vocabulary words. There are videos that go behind the scenes with the band members to explain the concepts. One of them challenges students to use a compass on a smartphone to make music.

The new resources are mapped to science standards, like the Next Generation Science Standards — a multi-state initiative — so teachers have an easier sell when adding it to their existing curriculum.

"The universal thing we're trying to get at is just curiosity and wonder," says Damian Kulash. "That excitement about the world, where you want to uncover something magical."