Accessibility links
A Visit To Topeka: Reflecting On Linda Brown's Legacy : NPR Ed Linda Brown, the 9-year-old old whose name was enshrined in the landmark 1954 Supreme Court ruling in Brown vs. Board of Education of Topeka, died this past Sunday. She was 75.

A Visit To Topeka: Reflecting On Linda Brown's Legacy

A Visit To Topeka: Reflecting On Linda Brown's Legacy 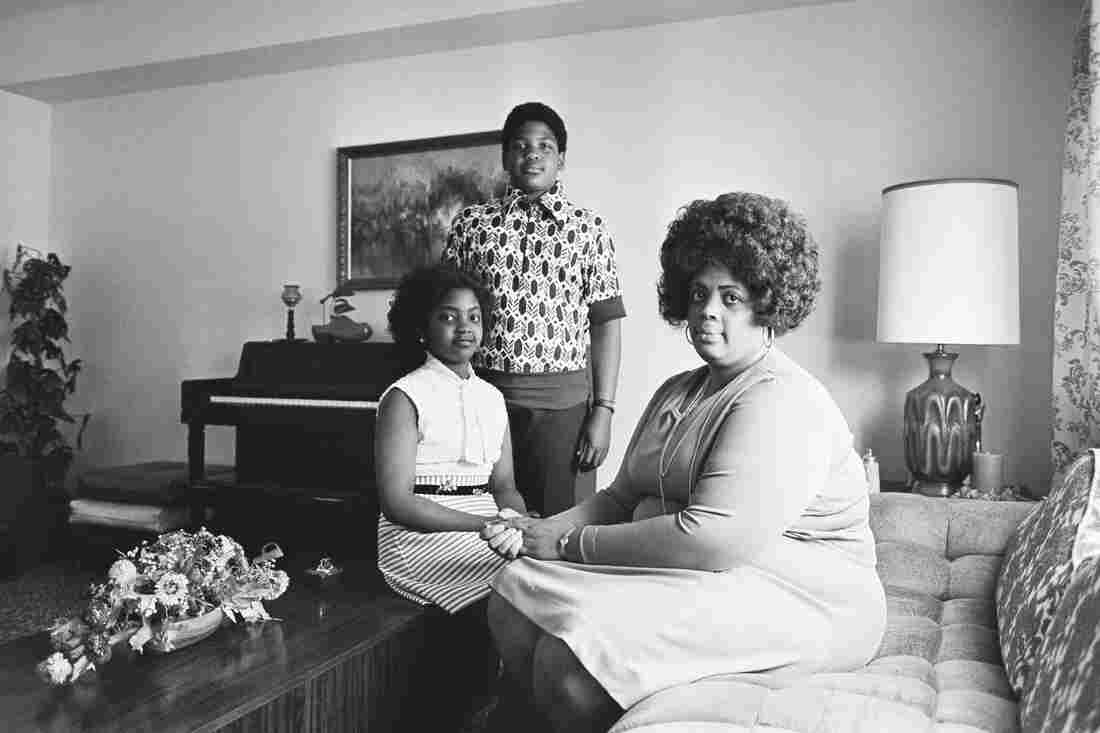 In this April 30, 1974, file photo, Linda Brown, right, and her two children pose for a photo in their home in Topeka, Kan. Brown, the Kansas girl at the center of the 1954 U.S. Supreme Court ruling that struck down racial segregation in schools, died March 25 at age 75. AP hide caption 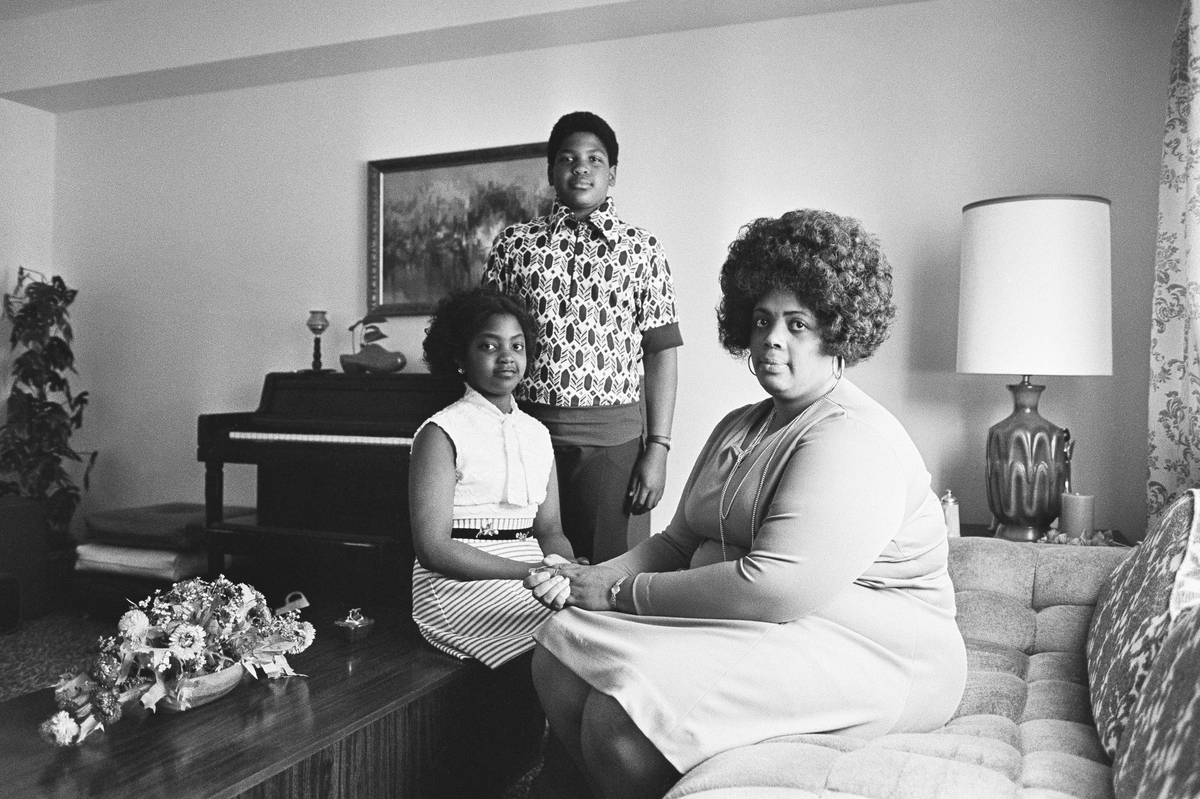 In this April 30, 1974, file photo, Linda Brown, right, and her two children pose for a photo in their home in Topeka, Kan. Brown, the Kansas girl at the center of the 1954 U.S. Supreme Court ruling that struck down racial segregation in schools, died March 25 at age 75.

I never met Linda Brown in person. But like many Americans I knew her story. And her death on Sunday reminded me that, in 1996, my NPR colleague and producer Walter Ray Watson and I spent several days in Topeka, hoping to find another layer to Linda's story and her role in the Supreme Court's historic Brown v. Board of Education ruling.

I've been reporting on school segregation — and desegregation — for years and Brown's passing reminded me of this visit to the place where, in a sense, this story began.

I remember driving down the tree-lined streets of the racially mixed neighborhood where Linda lived with her family in the 1950s, a mostly blue-collar and middle-class neighborhood of office workers, merchants and lawyers.

The Rev. Oliver Brown, his wife, Leola, and their children lived just a few blocks from Sumner Elementary School, the whites-only school that, back then, had barred African-American kids from enrolling.

Sumner Elementary was housed in a beautiful building with white limestone walls that had turned pale yellow. Past the main entrance the hallways were framed by meticulously carved woodwork along varnished maple floors.

It felt so welcoming. There was no hint of course that it had once banned black children from the neighborhood it was meant to serve. (Although it was interesting to learn from the school's old custodian that light-skinned Mexican-American kids were allowed to attend Sumner.)

Before arriving in Topeka we had put in a few calls to the foundation that Linda Brown and her siblings had started, and tried to schedule an interview with her. We had not gotten a response, so we went to the Topeka public library to dig up some old newspaper clippings about the Brown family's fight to enroll their children at Sumner, and we began talking to people who were around back then.

In the fall of 1950, on the first day of school, Mr. Brown showed up at Sumner holding his daughter, Linda, by the hand. Frank Wilson, the school principal, was waiting for them. Wilson had been instructed to turn the little girl away, which he did.

During our 1996 visit, Wilson agreed to talk to us about that day. He told us he would've been fired if he had not turned away Linda and her dad.

"I remember Mr. Brown thanked me and left," Wilson told us. "And that was the end of my role in the whole affair."

Wilson told us he personally had nothing against the Brown family or black people. He came across as a man torn by history. Wilson told us he felt racial integration in America would always be elusive.

Many years later, Wilson told us, he was the first white principal in Topeka who chose to work with black faculty.

Of the 22 elementary schools that the Topeka school board operated up until the mid 1950s, 18 were for whites-only. Four were all black, including Monroe Elementary, the school that Linda had to walk to. To get to Monroe, 9-year-old Linda had to walk past a rail yard, down a busy road and then board a bus to school.

We went down that same route.

It was hard to imagine that little children had to walk that far, especially in winter, when they could've gone to Sumner, their neighborhood school just blocks away.

Monroe Elementary and the other segregated black schools in Topeka had nearly equal facilities when compared with white schools. This allowed the NAACP's lawyers led by Thurgood Marshall to argue against the "separate but equal" justification and to make the case that segregation was detrimental to the development of black children regardless of their facilities, because it made black children feel inferior to their white peers.

In the eyes of some black parents and teachers, Monroe was in many ways a better school than Sumner. Barbara Ross, a black teacher who taught at Monroe recalled in a 2004 interview for PBS: "We had qualified black teachers, very qualified. We had the same books as white teachers because black teachers were on the school district committee that selected textbooks."

In the 1950s, the schools weren't the only thing in Topeka that were segregated.

African-Americans couldn't eat at white-only restaurants. They couldn't go to the theater with whites and black children couldn't go swimming with white children. Black kids could only use the pool after white kids were done.

By the fall of 1950, four other school segregation cases — from South Carolina, Virginia, Washington, D.C., and Delaware — were making their way to the U.S. Supreme Court. Brown v. Board of Education of Topeka, filed in February 1951, was the first one on the court's docket, and so it is Linda Brown's name that went into the history books.

The Supreme Court's unanimous decision in favor of Brown came three years later, on May 17, 1954.

"To separate [children] from others of similar age and qualifications solely because of their race," the court ruled, "generates a feeling of inferiority as to their status in the community that may affect their hearts and minds in a way unlikely to ever be undone."

Segregated schools were declared inherently unequal. The Brown family and African-Americans all over the country celebrated, but their joy was to be short-lived.

True desegregation would take years, as many states and school districts dragged their feet or ignored the ruling altogether. Eventually, the federal courts would have to step in to force school desegregation across the country, with mixed results.

U.S. schools today remain as segregated or more so than they were in 1954.

And, despite its historic importance to the nation in the pursuit of racial justice, the Brown decision was the beginning of the end for Topeka's remarkable, high-achieving black schools. Desegregation, after all, did not call for the integration of black teachers.

When black schools began to shut down, black teachers and administrators often lost their jobs because white schools refused to hire them. Gone were the black educators who had been vital role models for generations of black school children.

During our visit in 1996, we didn't get the chance to ask Linda Brown what she thought about that.

Before we left Topeka, she turned down NPR's request for an interview.

When she died this week, I was reminded once again of what she and so many black children had experienced — and how many children today are still attending schools that are as segregated today as they were in 1954.