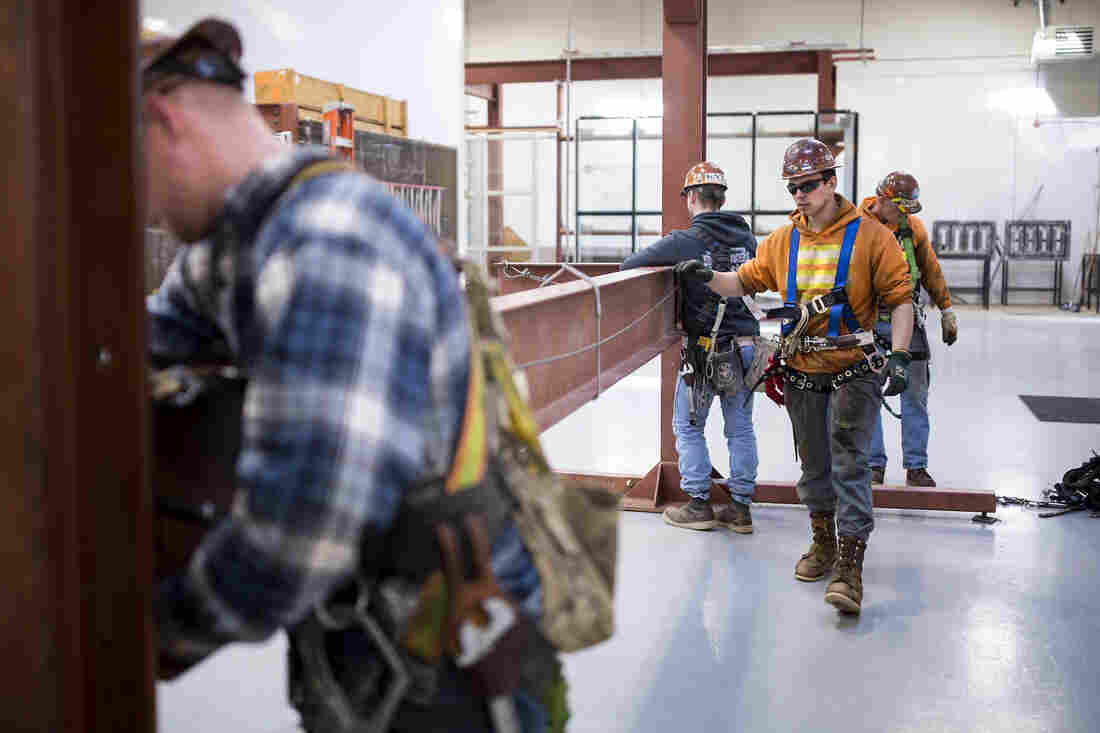 Garret Morgan (center) is training as an ironworker near Seattle and already has a job that pays him $50,000 a year. Sy Bean/The Hechinger Report hide caption 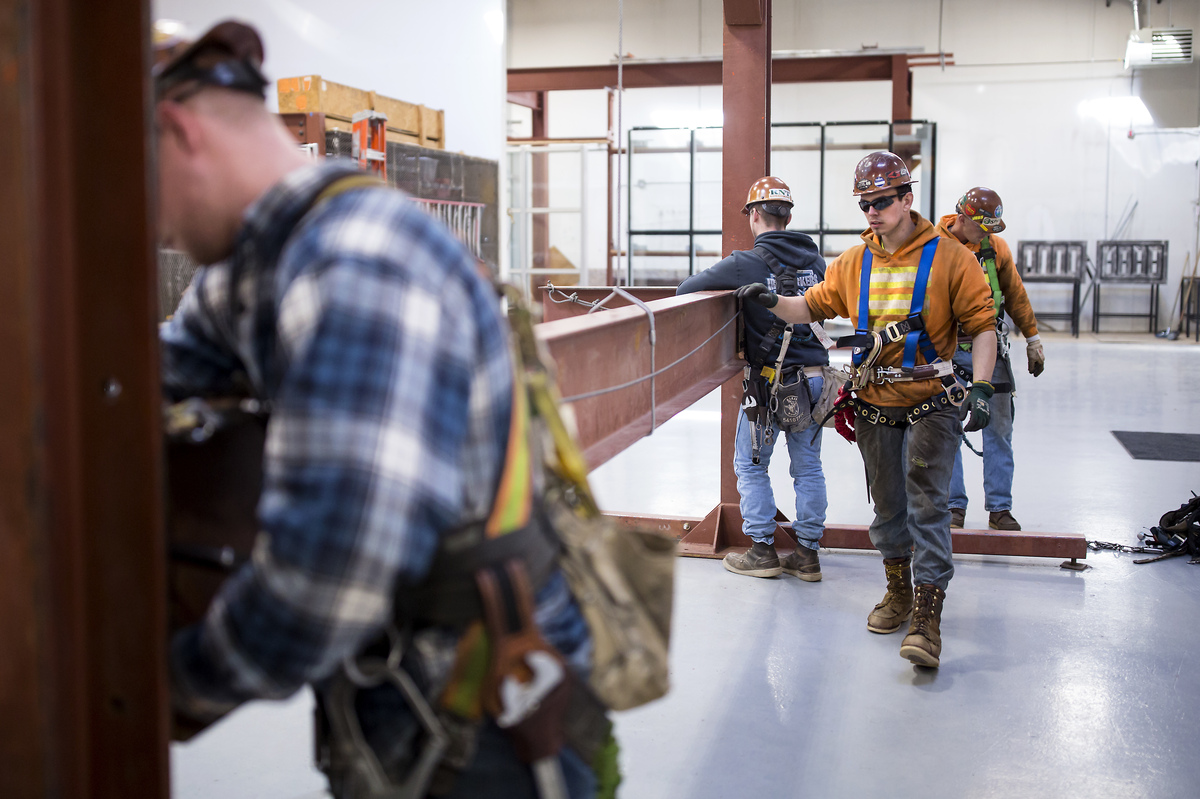 Garret Morgan (center) is training as an ironworker near Seattle and already has a job that pays him $50,000 a year.

Like most other American high school students, Garret Morgan had it drummed into him constantly: Go to college. Get a bachelor's degree.

"All through my life it was, 'if you don't go to college you're going to end up on the streets,' " Morgan said. "Everybody's so gung-ho about going to college."

So he tried it for a while. Then he quit and started training as an ironworker, which is what he is doing on a weekday morning in a nondescript high-ceilinged building with a concrete floor in an industrial park near the Seattle-Tacoma International Airport.

Are you heading to a program to prepare for a job? Are you going for an associates degree in your field? Maybe you're foregoing a degree entirely.

We want to hear about your choice (or your students' choices).

Morgan and several other men and women are dressed in work boots, hard hats and Carhartt's, clipped to safety harnesses with heavy wrenches hanging from their belts. They're being timed as they wrestle 600-pound I-beams into place.

Seattle is a forest of construction cranes, and employers are clamoring for skilled ironworkers. Morgan, who is 20, is already working on a job site when he isn't at the Pacific Northwest Ironworkers shop. He gets benefits, including a pension, from employers at the job sites where he is training. And he is earning $28.36 an hour, or more than $50,000 a year, which is almost certain to steadily increase.

Some 30 million jobs in the United States that pay an average of $55,000 per year don't require bachelor's degrees.

As for his friends from high school, "they're still in college," he said with a wry grin. "Someday maybe they'll make as much as me."

While a shortage of workers is pushing wages higher in the skilled trades, the financial return from a bachelor's degree is softening, even as the price — and the average debt into which it plunges students — keeps going up.

But high school graduates have been so effectively encouraged to get a bachelor's that high-paid jobs requiring shorter and less expensive training are going unfilled. This affects those students and also poses a real threat to the economy.

"Parents want success for their kids," said Mike Clifton, who teaches machining at the Lake Washington Institute of Technology, about 20 miles from Seattle. "They get stuck on [four-year bachelor's degrees], and they're not seeing the shortage there is in tradespeople until they hire a plumber and have to write a check." 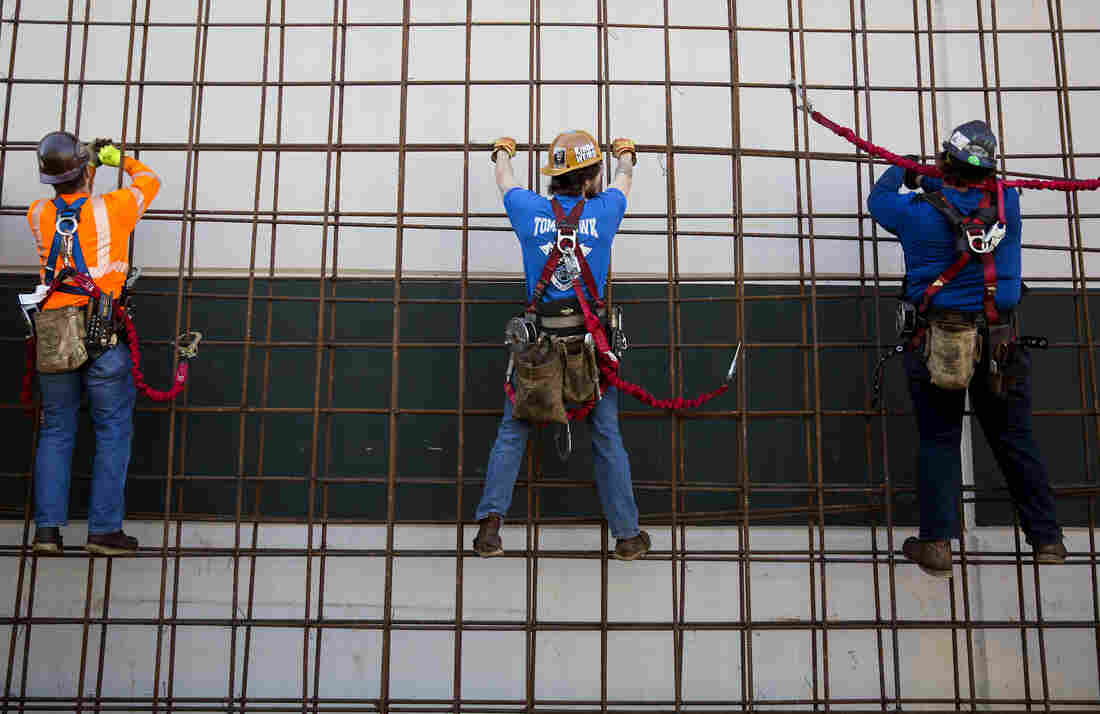 In a new report, the Washington State Auditor found that good jobs in the skilled trades are going begging because students are being almost universally steered to bachelor's degrees.

Among other things, the Washington auditor recommended that career guidance — including choices that require less than four years in college — start as early as the seventh grade.

"There is an emphasis on the four-year university track" in high schools, said Chris Cortines, who co-authored the report. Yet, nationwide, three out of 10 high school grads who go to four-year public universities haven't earned degrees within six years, according to the National Student Clearinghouse. At four-year private colleges, that number is more than 1 in 5.

"Being more aware of other types of options may be exactly what they need," Cortines said. In spite of a perception "that college is the sole path for everybody," he said, "when you look at the types of wages that apprenticeships and other career areas pay and the fact that you do not pay four years of tuition and you're paid while you learn, these other paths really need some additional consideration."

And it's not just in Washington state.

"Parents want success for their kids. They get stuck on [four-year bachelor's degrees], and they're not seeing the shortage there is in tradespeople until they hire a plumber and have to write a check.

Seventy-percent of construction companies nationwide are having trouble finding qualified workers, according to the Associated General Contractors of America; in Washington, the proportion is 80 percent.

There are already more trade jobs like carpentry, electrical, plumbing, sheet-metal work and pipe-fitting than Washingtonians to fill them, the state auditor reports. Many pay more than the state's average annual wage of $54,000.

Construction, along with health care and personal care, will account for one-third of all new jobs through 2022, according to the Bureau of Labor Statistics. There will also be a need for new plumbers and new electricians. And, as politicians debate a massive overhaul of the nation's roads, bridges and airports, the U.S. Department of Education reports that there will be 68 percent more job openings in infrastructure-related fields in the next five years than there are people training to fill them.

"The economy is definitely pushing this issue to the forefront," said Amy Morrison Goings, president of the Lake Washington Institute of Technology, which educates students in these fields. "There isn't a day that goes by that a business doesn't contact the college and ask the faculty who's ready to go to work."

In all, some 30 million jobs in the United States that pay an average of $55,000 per year don't require bachelor's degrees, according to the Georgetown Center on Education and the Workforce.

Yet the march to bachelor's degrees continues. And while people who get them are more likely to be employed and make more money than those who don't, that premium appears to be softening; their median earnings were lower in 2015, when adjusted for inflation, than in 2010.

"There's that perception of the bachelor's degree being the American dream, the best bang for your buck," said Kate Blosveren Kreamer, deputy executive director of Advance CTE, an association of state officials who work in career and technical education. "The challenge is that in many cases it's become the fallback. People are going to college without a plan, without a career in mind, because the mindset in high school is just, 'Go to college.' " 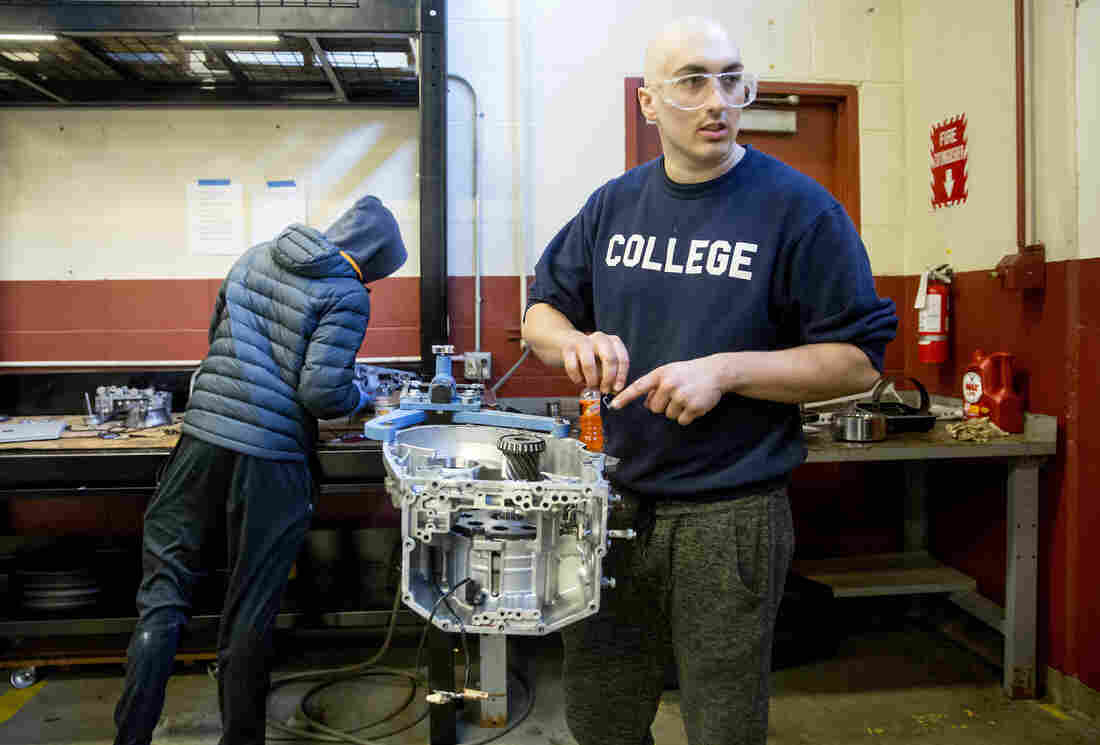 Matthew Dickinson, 21, asks a classmate for help as they rebuild an automatic transmission in an auto repair technician program classes at the Lake Washington Institute of Technology. Sy Bean/The Hechinger Report hide caption

It's not that finding a job in the trades, or even manufacturing, means needing no education after high school. Most regulators and employers require certificates, certifications or associate degrees. But those cost less and take less time than earning a bachelor's degree. Tuition and fees for in-state students to attend a community or technical college in Washington State, for example, come to less than half the cost of a four-year public university, the state auditor points out, and less than a tenth of the price of attending a private four-year college.

People with career and technical educations are also more likely to be employed than their counterparts with academic credentials, the U.S. Department of Education reports, and significantly more likely to be working in their fields of study.

Young people don't seem to be getting that message. The proportion of high school students who earned three or more credits in occupational education — typically an indication that they're interested in careers in the skilled trades — has fallen from 1 in 4 in 1990 to 1 in 5 now, according to the U.S. Department of Education.

Washington is not the only state devoting attention to this. California is spending $200 million to improve the delivery of career and technical education. Iowa community colleges and businesses are collaborating to increase the number of "work-related learning opportunities," including apprenticeships, job shadowing and internships. Tennessee has made its technical colleges free.

So severe are looming shortages of workers in the skilled trades in Michigan that Gov. Rick Snyder in February announced a $100 million proposal he likens to the Marshall Plan that rebuilt Europe after World War II.

At the federal level, there is bipartisan support for making Pell grants available for short-term job-training courses and not just university tuition. The Trump administration supports the idea.

For all the promises to improve vocational education, however, a principal federal source of money for it, called Tech-Prep, hasn't been funded since 2011. A quarter of states last year reduced their own funding for postsecondary career and technical education, according to the National Association of State Directors of Career Technical Education.

Money isn't the only issue, advocates for career and technical education say. An even bigger challenge is convincing parents that it leads to good jobs. 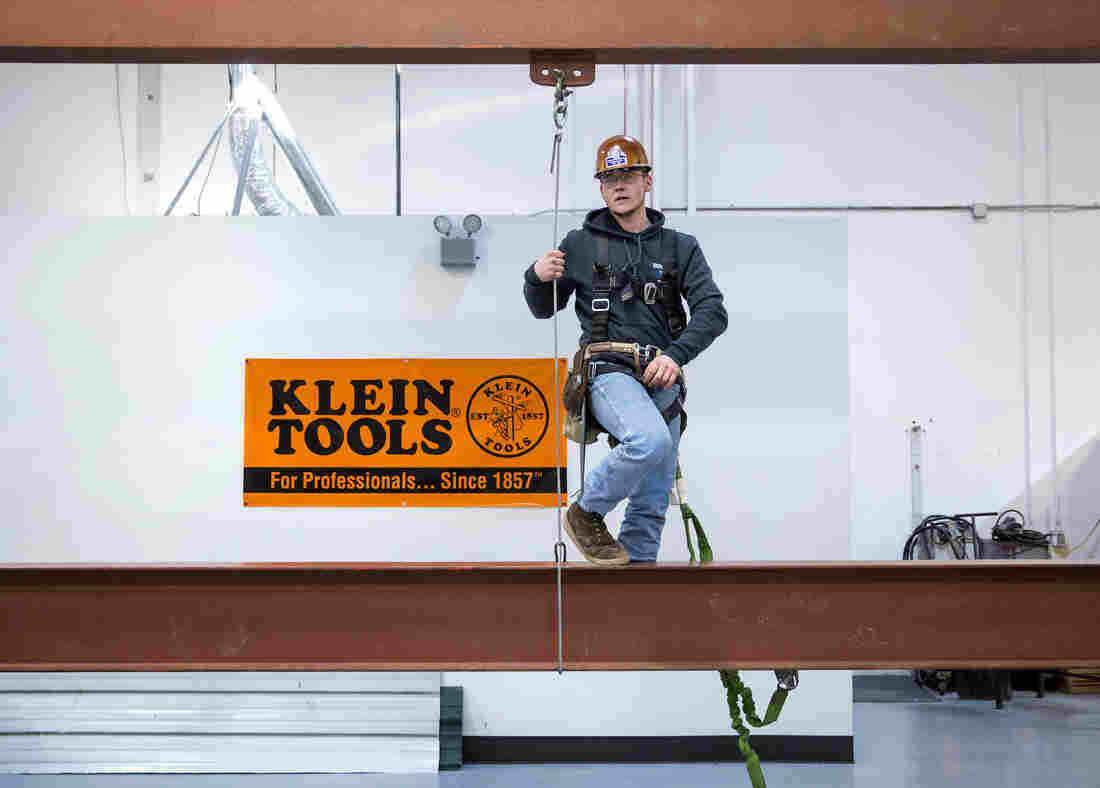 "They remember 'voc-ed' from when they were in high school, which is not necessarily what they aspire to for their own kids," Kreamer said.

The parents "are definitely harder to convince because there is that stigma of the six-pack-totin' ironworker," said Greg Christiansen, who runs the ironworkers training program. Added Kairie Pierce, apprenticeship and college director for the Washington State Labor Council of the AFL-CIO: "It sort of has this connotation of being a dirty job. 'It's hard work — I want something better for my son or daughter.' "

Of the $200 million that California is spending on vocational education, $6 million is going into a campaign to improve the way people regard it. The Lake Washington Institute of Technology changed its name from Lake Washington Technical College, said Goings, its president, to avoid being stereotyped as a vocational school.

These perceptions fuel the worry that, if students are urged as early as the seventh grade to consider the trades, then low-income, first-generation and ethnic and racial minority high school students will be channeled into blue-collar jobs while wealthier and white classmates are pushed by their parents to get bachelor's degrees.

"When CTE was vocational education, part of the reason we had a real disinvestment from the system was because we were tracking low-income and minority kids into these pathways," Kreamer said. "There is this tension between, do you want to focus on the people who would get the most benefit from these programs, and — is that tracking?" 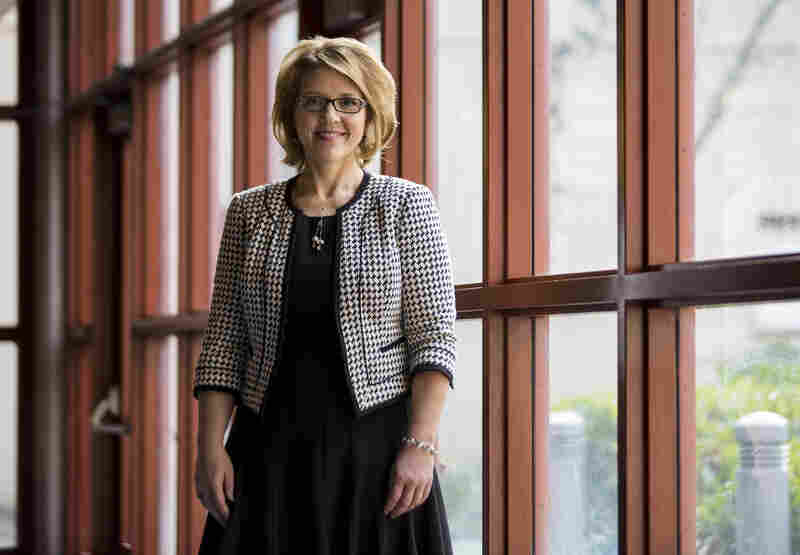 Amy Morrison Goings, president of the Lake Washington Institute of Technology, says, "There isn't a day that goes by that a business doesn't contact the college and ask the faculty who's ready to go to work." Sy Bean/The Hechinger Report hide caption

In a quest for prestige and rankings, and to bolster real-estate values, high schools also like to emphasize the number of their graduates who go on to four-year colleges and universities.

Jessica Bruce followed that path, enrolling in community college after high school for one main reason: because she was recruited to play fast-pitch softball. "I was still trying to figure out what I wanted to do with my life," she said.

As for whether anyone looks down on her for not having a bachelor's degree, Bruce doesn't particularly care.

"The misconception," she said, "is that we don't make as much money."

And then she laughed again. 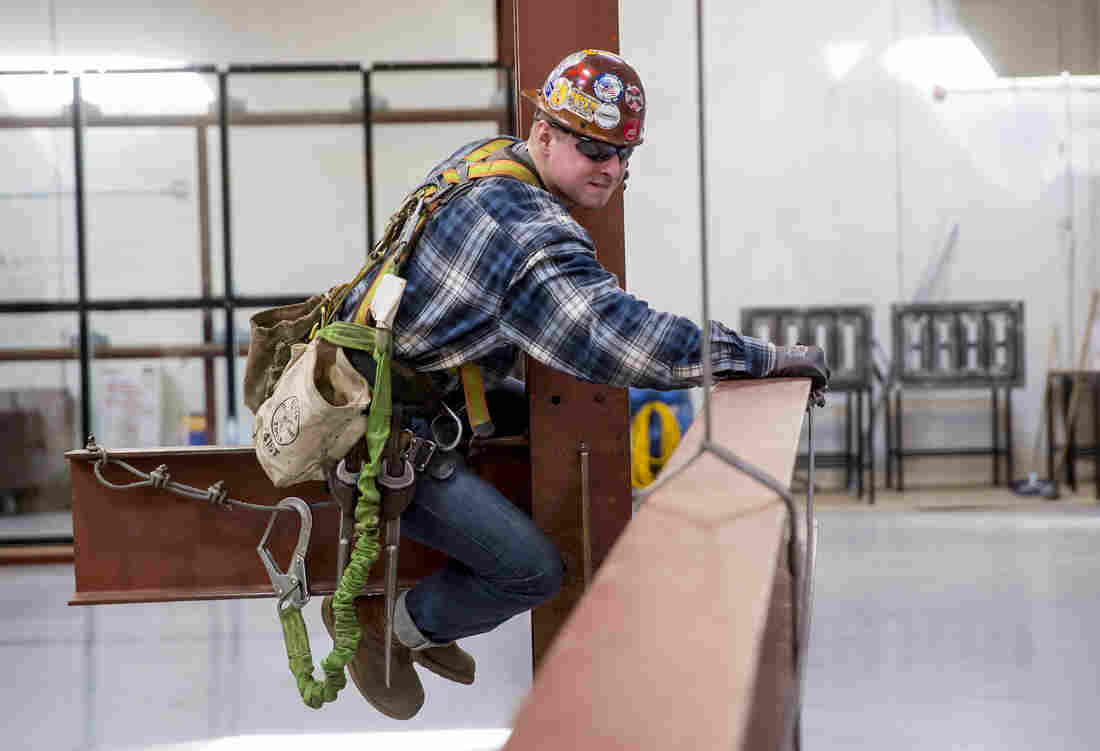