Accessibility links
Now It's North Carolina Teachers' Turn: How Did We Get Here? What's Next? : NPR Ed As teachers walk out in a sixth state, signs of what's to come. 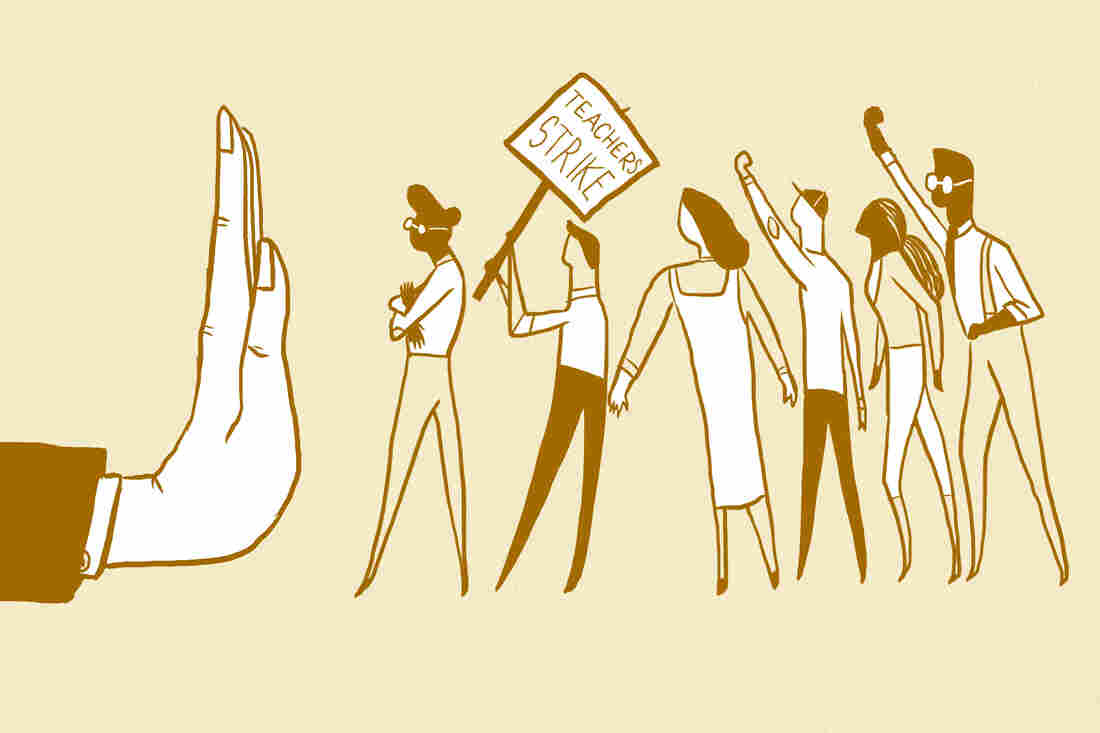 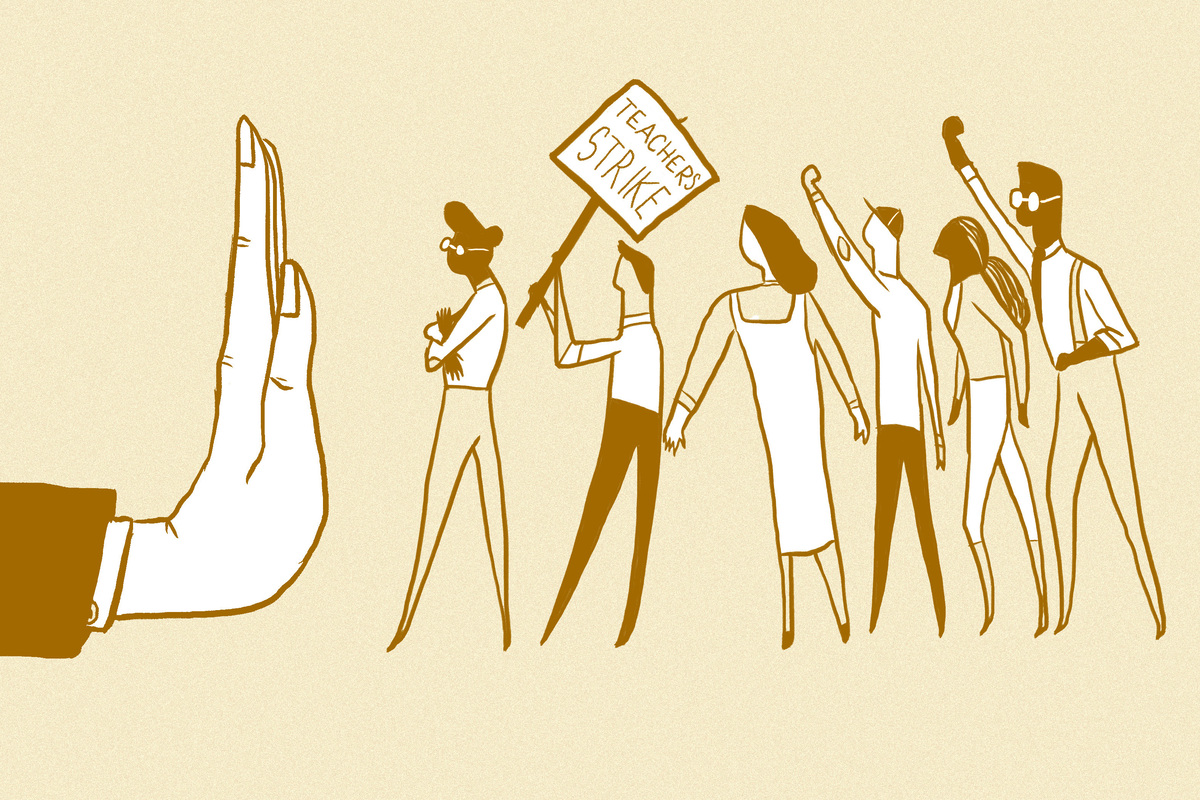 Sally Merryman has taught middle school Spanish in North Carolina for more than 20 years. She, like thousands of teachers from all over the state, plans to march on the state capitol in Raleigh this week.

On Wednesday, teachers in North Carolina will become the latest to leave their classroom posts and march on their state capitol, wearing #RedforEd T-shirts, in a quest for better compensation for themselves and more resources for their students.

"That energy spreads like wildfire," says Merryman, "because people really feel now that there's some momentum in this movement and they can really affect change."

Seamus Kenney, a middle school band and chorus teacher from Chapel Hill, will be there. So will his wife, Kerri Lockwood, who teaches elementary school art. Kenney comes from a family of teachers, he told NPR. Falling wages have driven some of his colleagues out of the profession, but others, like himself, are "hunkering down and saying, 'No, I'm staying,' and demanding that it be improved."

Kenney says he moonlights giving private music lessons to make ends meet, sometimes working 13-hour days with choir and band concerts. "I'm not asking for everything all at once, but I do want to look down the road and feel that I'm progressing towards a better life," he adds.

Tim Moore, a Republican who is the state's Speaker of the House, says North Carolina is already showing progress. "The [National Education Association] just ranked us last year as the No. 1 state in the country for teacher wage growth," Moore says. "Teachers are getting bigger pay increases than any other state employees." He sees "a liberal political agenda" behind the protests.

This is the sixth statewide teacher protest since February. With the broad support of parents and other members of the public, teachers, through grassroots organizing, have notched some victories in a group of mostly Republican right-to-work states.

Where this came from

Agustina Paglayan is a political economist who studies how governments around the world choose education policies. She says teacher pay has been comparatively low in the protesting states at least as far back as the 1930s. And, Paglayan adds, she has the answer to an apparent mystery: Why have these statewide uprisings have taken place in places where unions are historically weak?

Paglayan's research says you have to go back to the 1960s to understand.

"Before then, less than 5 percent of teachers belonged to a union," she explains. "It was not an organized profession."

In the midst of civil rights, feminist and anti-Vietnam protests, there were hundreds of public sector worker strikes per year between 1966 and 1968, Paglayan says.

On the picket lines, teachers at times won better pay packages and more respect. But in 19 states including New Jersey and New York, in exchange for collective bargaining agreements, they also accepted severe penalties for striking — like losing two days of pay for every day they were out, or even having their union dissolved.

So why are teachers marching now in places where unions are weak? Simple, says Paglayan. "They have much less to lose."

Without strong union structures in place, educators are winning concessions through grassroots and online organizing. This, Paglayan says, is a fascinating development considering the case now before the Supreme Court that would hobble the power of unions to collect any fees from nonmembers.

"If they rule something like that, that starts taking away some of the benefits teachers got in the 1960s, you could end up having a wave of strikes in a lot more states."

Jane McAlevey is an organizer and labor scholar who pretty much predicted what's going on right now. She published a book in 2016, No Shortcuts, arguing that in reaction to decades of tax cuts and budget cuts, "education and healthcare workers will create a woman-led new labor union movement."

One of the book's case studies is the Chicago teacher strike in 2012, which she argues is the forerunner to this year's protests. She also points to the defeat of a ballot question on charter school expansion in Massachusetts in 2016 as a major recent teacher union victory. And she says the "Bernie Sanders effect" in states like West Virginia, which handed him a primary victory in every county, laid the groundwork for the populist economic message that is resonating now.

Michael Hansen, a political economist at the Brookings Institution, also gets points for prescience. He wrote a blog post on April 13 naming North Carolina as one of the possible states at risk for teacher action. His criteria were: low-ranking salaries, salaries and per-pupil funding that's fallen in real terms since the Great Recession, and teacher pay determined at the state rather than district level, which makes state capitals the obvious target for an action.

Where this goes next

Hansen sees a "domino effect" in progress, helped along by some political "tailwinds": "the Democratic midterm wave elections, the women's #MeToo movement. There are just a lot of big movements happening here."

As he points out, women are a common thread in many of these movements. The partisan gap by gender — blue for women, red for men — is as wide as it's ever been. A record number of women are running for office this fall. And teaching is among the most female-dominated professions.

A wave of blue candidates?

So it's not too surprising that many teachers coming off their labor actions have been inspired to become candidates for office.

Renee Jerden, a choir teacher, just filed to run for state senate as a Democrat in Norman, Okla. She calls the walkout "the last straw," in her decision to run for office herself.

Besides education, she says, "my platform is, how is this issue going to affect the kids of Oklahoma? Poverty, health care, taxes." She says she's never seen her colleagues more engaged. "The longer we see all these other states start to have the same similar movement, we realize we are waking up a sleeping giant and filling it with a terrible resolve."

Jennifer Samuels teaches middle school in the Phoenix area, and just filed papers to run for the Arizona statehouse as a Democrat as well. She had originally planned to run in 2020, but after #Red4ED, "I had a front row seat in the gallery overnight to watch the debate, and watching our lawmakers really have no interest in appropriately funding public education."

Education and health care workers, McAlevey says, have an advantage over the factory workers of previous generations when it comes to building a broader political and social movement.

"They're mission-driven workers. They have an incredible relationship with the broader community. People love their teachers and nurses for good reason. They fight harder because they're not fighting for a raise, they're fighting over whether we're going to have public education."

But the most fundamental motivation here, says McAlevey, is as simple as a pendulum swing. "Everyone is just done with having no money. There's nowhere to go but up."

Melissa Easley, a seventh-grade science teacher in Charlotte, echoes these words. "The legislature has asked us to do more with less. We are at our max, we can't do anymore."

Easley says she was wearing her Red for Ed T-shirt last week at the grocery store.

"I was stopped by four different people: Are you going to Raleigh? Yes. Good for you."

Jolie Myers and Kat Lonsdorf edited and produced this story for broadcast.