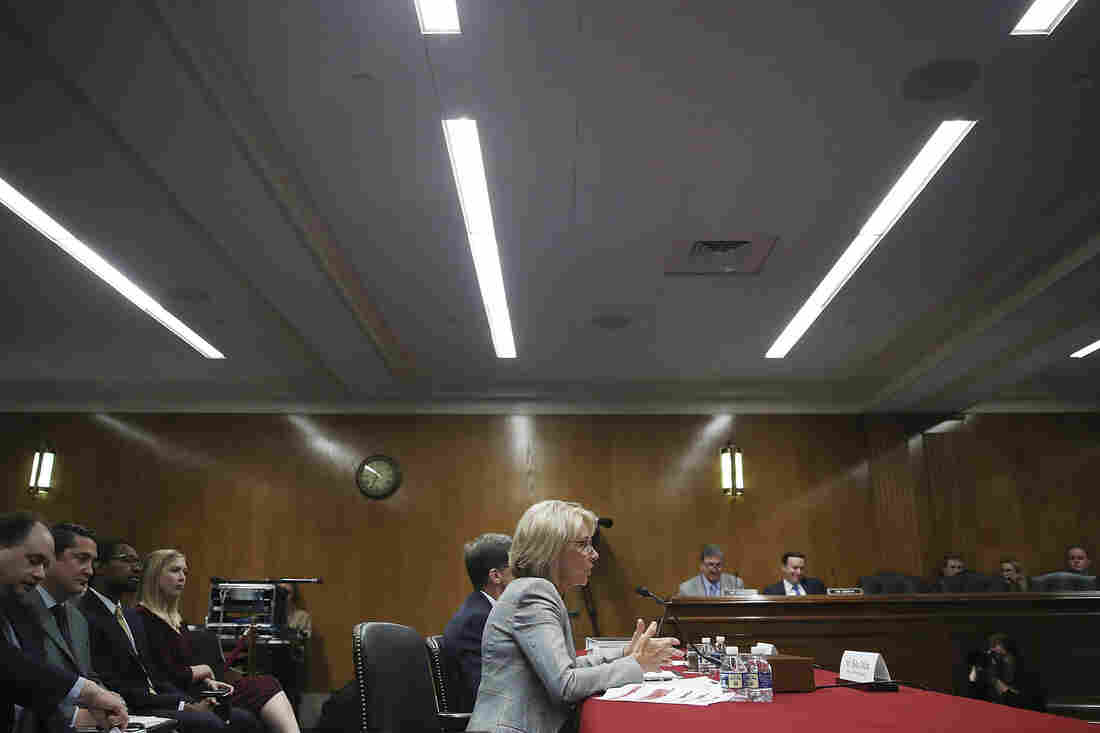 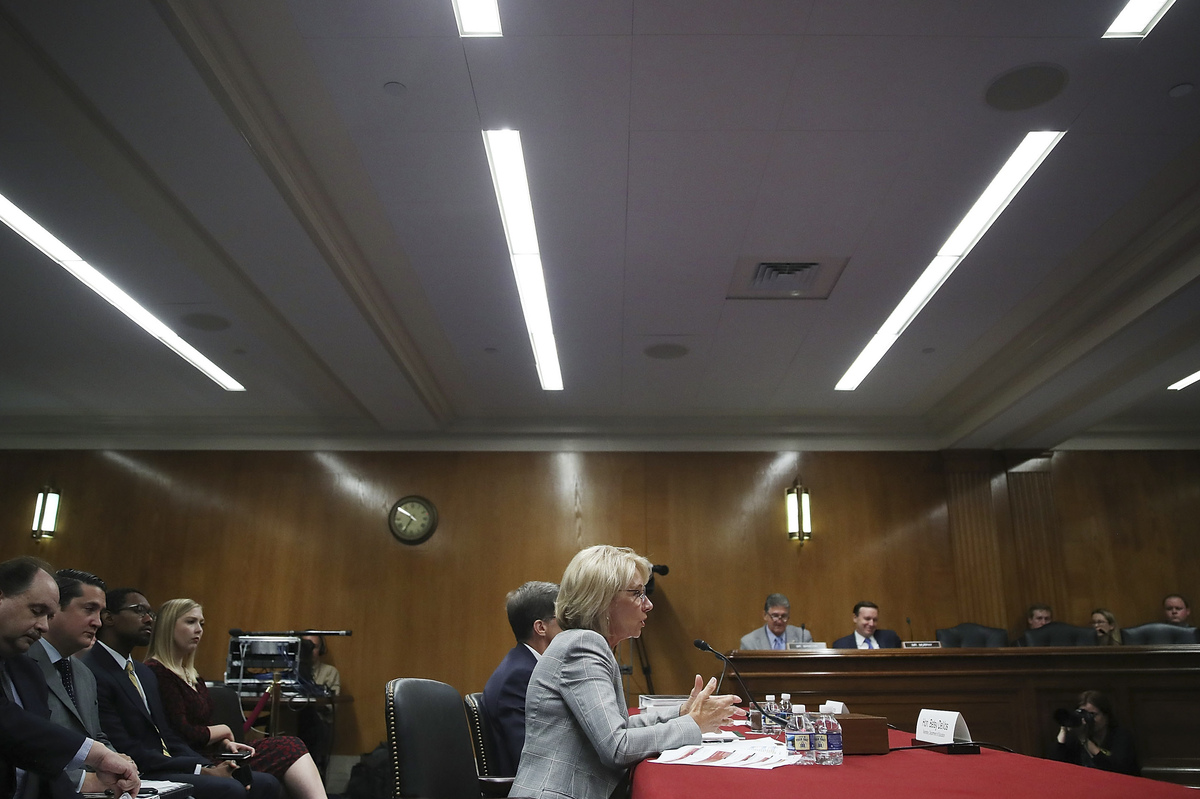 This week saw the first public session of the school safety commission formed by President Trump after the Parkland shooting and headed by Education Secretary Betsy DeVos.

As NPR's Brakkton Booker reported, however, DeVos wasn't at that listening session — and neither were the three other members. The Education Secretary was in Switzerland for a conference about vocational training, the first stop on 10–day trip in Europe.

The commission is charged with coming up with recommendations for making schools safer after 17 people died at Marjory Stoneman Douglas High School in Parkland, Fla., in February.

Earlier in the week, DeVos had appeared at a congressional hearing, and when asked about safety commission, she noted that it will not examine the role of guns in students' safety.

But at the commission's public listening session on Thursday, incoming Deputy Education Secretary Mick Zais clarified those remarks. He said the group would look at "narrow aspects of gun ownership," including specific age limits for purchasing some weapons and the procedures for confiscating weapons "from people with identified mental health issues."

A new leader for the Education Department's Civil Rights Office

On Thursday, the Senate confirmed Kenneth Marcus as the Assistant Secretary for Civil Rights at the Department of Education. Marcus served as a staff director on George W. Bush's Office for Civil Rights, and will undertake his new role as the office faces criticism and a recent lawsuit over its dismissal civil rights complaints.

Lamar Alexander, the Tennessee Republican who chairs the Senate education committee, spoke in Marcus' favor on the senate floor, reading an endorsement from Hillel International, an organization of Jewish college students. "Mr. Marcus has been a longtime champion for civil rights and college students," the statement began.

Sen. Cory Booker, a New Jersey Democrat, spoke emphatically against Marcus' confirmation, describing him as someone with a "disregard and an apathy towards the compelling and continuing problems in our schools."

In Puerto Rico, many schools close for good

As the school year winds down in Puerto Rico, many teachers and students are saying goodbye to their classrooms forever. The government has plans to close 265 schools due to enrollment and economic problems — though the Puerto Rico Education Department temporarily stopped some closures this week, and communities are lobbying to keep some schools open.

1. It‘s been a day of tremendous pain in schools across Puerto Rico. Teachers were asked to hand in the keys for classrooms they won’t see again as the govt. prepares to close 265 of its 1,100 schools. I visited one today. Parents picked up grades as teachers packed. pic.twitter.com/84uax9ihwy

NPR's Adrian Florido has been reporting from the island this year following Hurricane Maria.

New York City Mayor Bill de Blasio followed up on a campaign promise last week to try to change the requirements for admission to eight of the city's selective public high schools. Those schools, which include Stuyvesant High School, Bronx High School of Science, and Brooklyn Latin School, rely on a single test, which students take in eighth grade, to determine admission. The mayor says these selective schools admitted a total of 5,000 incoming ninth-graders last fall — but that number included just 172 black students and 298 Latinx students.

Try This One Trick To Improve Student Outcomes

Instead, the mayor proposed that these top high schools guarantee spots for the top students at every middle school — a change that would require legislation. He also floated plans to expand the city's Discovery program, which offers admission to low–income students who scored just below the test cutoff.

Many parents and students in the Asian community have protested, calling the changes biased. Asian students currently make up 62 percent of these selective schools. However, they make up just a third of all applicants, according to Jonathan Taylor at Hunter College, who says his research shows that 7th-grade GPA is a better predictor of performance in high school than the state's test.

He has also found that students admitted under the Discovery program perform just as well in high school as their classmates.

De Blasio's plan requires approval by the state assembly, and lawmakers in Albany on Thursday announced that the plan is on hold for now.

Apple makes it easier to track, and limit, use of devices by kids

Parents now have much more power to track how much their children use certain apps — and to limit their kids' use of other apps — on Apple devices. The company announced on Wednesday that the iOS 12 operating system, out later this year, will include a feature called Screen Time that allows all users to limit the overall time they spend on their phones or on certain apps.

In combination with its existing parental controls, Screen Time will give parents the power to set an internet curfew for teens, or curb the use of Fortnite.

Studies show that kids are spending more and more time on their phones and online — and that these hours bring both possibilities and risks.