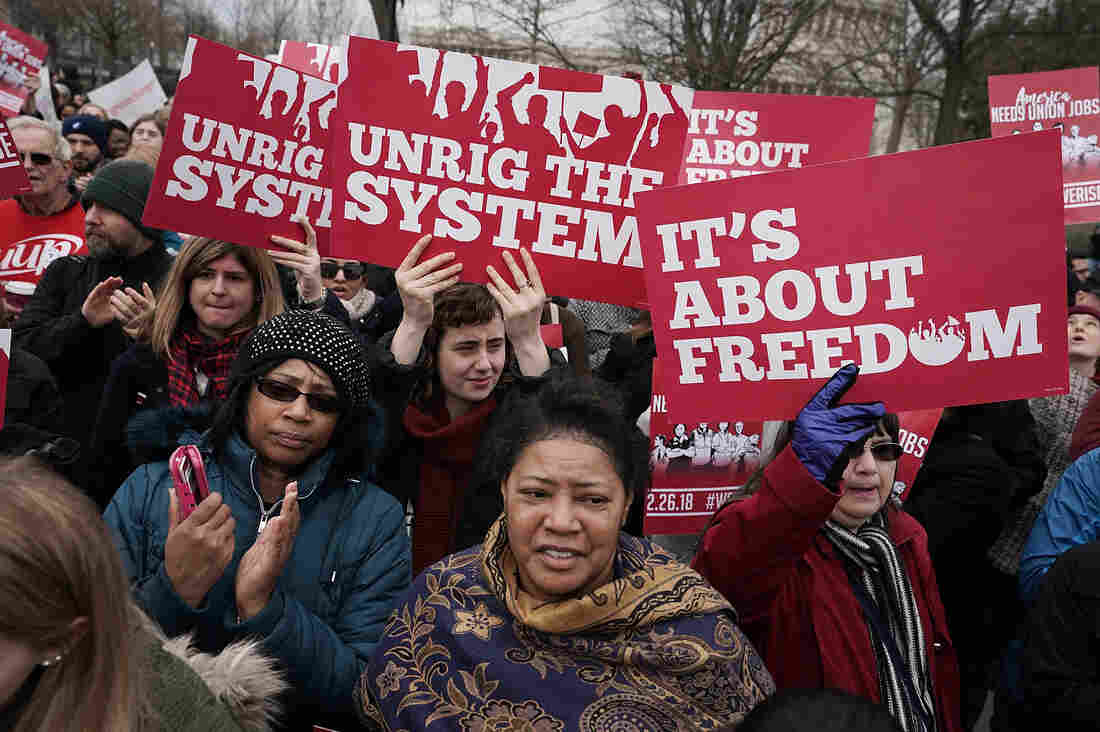 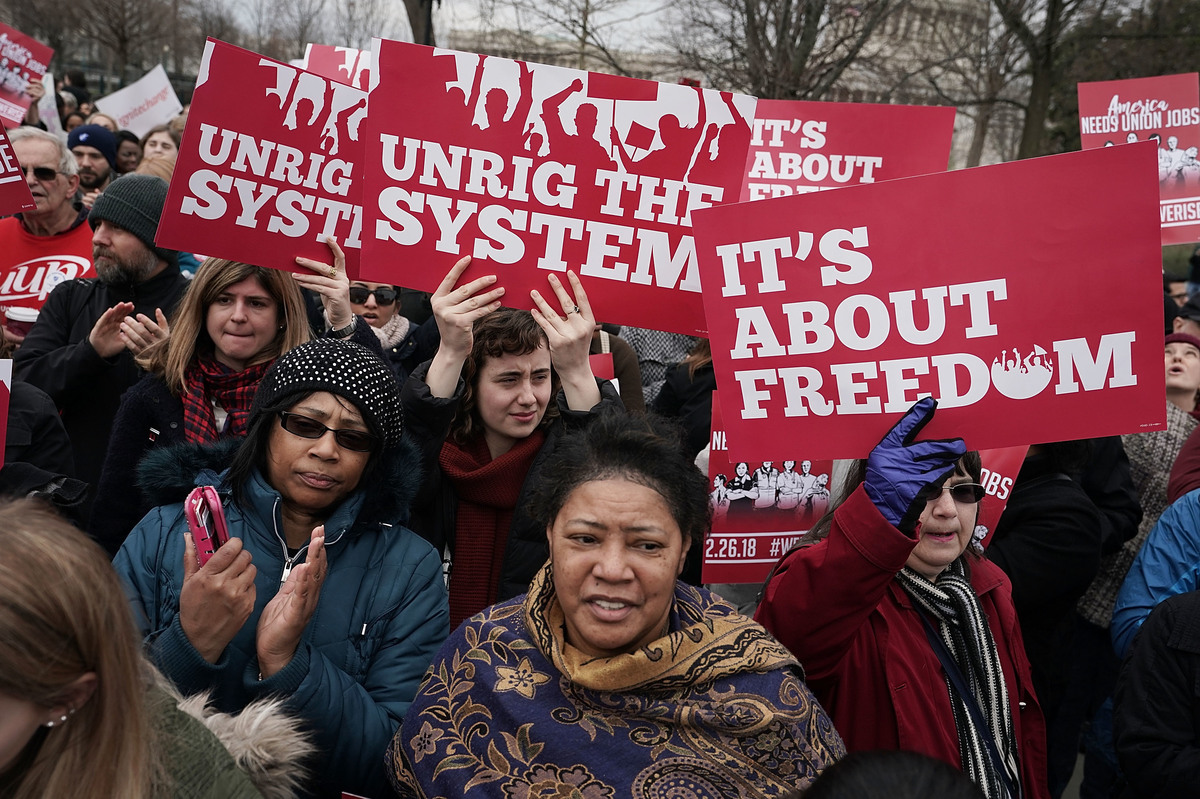 Activists rally in front of the U.S. Supreme Court on Feb. 26.

The U.S. Supreme Court issued a ruling Wednesday that will reverberate through America's schools for years.

In Janus v. AFSCME, a 5-4 court majority overturned precedent, saying that public sector unions, like those that represent law enforcement, state employees, and, of course, teachers, can no longer collect what are known as agency fees from nonmembers.

Until now, in nearly half of states (22), public employees who chose not to join the union still had to pay it something, because they're still covered by unions' collective-bargaining agreements. But some workers who oppose their unions' politics, such as plaintiff Mark Janus, a state child-support specialist in Illinois, say that any payment infringes on their free speech rights.

On Wednesday, the Supreme Court agreed.

Technically, unions have long been forbidden from using these agency fees to pay for political activity. In fact, it was another Supreme Court case, Abood v. Detroit Board of Education in 1977, that made clear agency fees should only be used to cover costs related to bargaining. Applying them to a union's political activities could violate a paying nonmember's First Amendment rights. On Wednesday, though, the court called Abood "poorly reasoned."

For supporters of the decision, like Lindsey Burke at the conservative-leaning Heritage Foundation, the outcome is a big win for the "individual rights of teachers," who will see more "hard-earned dollars in their pockets," and a loss for unions that want to "garnish their wages to fund activities they disagree with."

But union leaders and many of the millions of teacher members are angry and worried about what this means for the future of teachers unions. Here are a few educated guesses.

Two education researchers, Bradley D. Marianno at the University of Southern California and Katharine O. Strunk at Michigan State University, looked at two states, Wisconsin and Michigan, where unions recently lost the power to collect agency fees. They published their analysis in the journal Education Next.

In Wisconsin, the law limiting union activity, Act 10, dramatically scaled back the union's ability to bargain. After it passed in 2011, the state affiliate of the National Education Association lost more than half its members.

"We had to really shift our thinking," says Ron Martin, a teacher and president of the Wisconsin NEA affiliate. "And our focus couldn't just be on the bread and butter issues. We had to let people know your union does so much more than just bargain a contract."

In Michigan, the researchers found, "in the three years after the reform, the state NEA lost about 21 percent of its members." One reason for the decline, Marianno and Strunk found, was that unions also lost the ability to automatically withhold dues from paychecks, shifting enrollment from being the default to an opt-in system.

It's not too surprising that losing the ability to collect agency fees means less money for the unions. But it's more complicated than that, says Nat Malkus, a resident scholar at the conservative-leaning American Enterprise Institute.

"Three percent of NEA's budget are from fee-payers," says Lily Eskelsen García, president of the NEA, the nation's largest teachers union. "This is just a very, very tiny part."

But, Malkus says, losing the ability to collect those fees will also drive down dues-paying membership.

In the past, in those 22 states that allowed agency fees, Malkus says, teachers had a choice between paying for full union membership and paying agency fees. But the fee was often roughly two-thirds the cost of dues. Since membership comes with additional benefits, many teachers chose $1,000 in dues versus $650 in agency fees. But now ...

"Doing away with agency fees," Malkus says, "that choice becomes, to pay either a thousand dollars in dues or nothing." And, he believes, many teachers, especially low-end earners, will opt for paying nothing.

Martin, the union leader in Wisconsin, heard from many of these teachers in the wake of Act 10. He says they would often ask: " 'Well, why should I pay the dues? I'm gonna get whatever you guys work hard for me anyways.' "

In economics, this is called a free-rider problem. In states that previously allowed agency fees, unions will still be legally required to represent all workers at the negotiating table — a service that workers can now enjoy for free.

"I cannot imagine we would require Bank of America to provide services to folks that they do not charge any kind of reasonable fee. It would just be unheard of," says Celine McNicholas, director of labor law and policy at the left-leaning Economic Policy Institute.

Although they have less money and fewer members, affiliates in Michigan and Wisconsin have cut nonpolitical spending in order to dedicate more of their dwindling budget to supporting candidates, Marianno and Strunk found. In Wisconsin, contributions per candidate actually increased.

Martin, the president of Wisconsin's NEA affiliate, says his group's political spending did shift. They spent less time and money lobbying lawmakers at the state capitol, and he says "we had to focus our election work on electing positive school boards ... electing locally, getting the right school boards in place that work collaboratively with educators."

4. Have less power to oppose school choice and other education reform

For Burke at the Heritage Foundation, a think tank that supports vouchers and other school choice measures, weakening teachers unions has an ancillary benefit.

"The unions have long pushed back against any sort of school choice efforts, even charter schools," she says. "Unions are going to have fewer dollars to push back against long-overdue education reforms. They'll have to make some tough decisions."

Union leaders told Marianno and Strunk that they are expanding efforts to reach out to younger teachers and attract membership.

Jane McAlevey works as a union organizer and consultant encouraging labor leaders to build a "high participation union." She urges unions to involve the rank and file in decisionmaking, including opening negotiations and the process for endorsing candidates.

"A good union will figure out how to overcome" the loss of agency fees, she says. McAlevey notes that the Massachusetts Nurses Association has been successful in maintaining its power by instituting its own autopay system, called Union Direct.

The NEA's Eskelsen García says nationally, her union's trying to send a focused message to current and prospective members — the same one she heard, years ago, as a teacher in Utah: The NEA is fighting for "class-size reduction, technology, and better textbooks for our kids. Those were all the things I needed, and I signed up!"

This may seem counterintuitive. But this is one point that most of our experts agreed on. If you look at the wave of teacher uprisings that swept the country this spring, the majority happened in right-to-work states where unions were small and weak (and already could not collect agency fees).

"What you see in the red state strikes was teachers fed up and unions not being strong enough to return to teachers raises and pension reforms that were acceptable to them," says AEI's Malkus.

Marianno and Strunk write, "By causing teachers unions to return to collective action on behalf of their members, the Supreme Court decision may, in the end, invigorate the unions that these court cases and the groups that sponsored them intended to incapacitate."

Agustina Paglayan is a political economist who focuses on education. She told NPR in May that, in the same states where teachers have been covered by collective-bargaining and agency fees, they have also accepted costly strike penalties. This ruling tends to erode both union power and the bargains that have upheld it. More militant grass-roots and online organizing may be the result. "You could end up having a wave of strikes in a lot more states."

McAlevey, the union organizer, agrees. So does EPI's McNicholas.

"I would point to West Virginia and Oklahoma" to see what's going to happen as a result of this decision, McNicholas says. "I think that not having effective collective bargaining, which I think will be the result, means workers will be forced to resort to other tactics to ensure their wages and fundamental benefits, and also quite frankly the quality of services they provide."