Accessibility links
The 'Overparenting' Crisis In School And At Home : NPR Ed Cutting kids' meat or doing their laundry can undermine their sense of self-worth, two books argue. 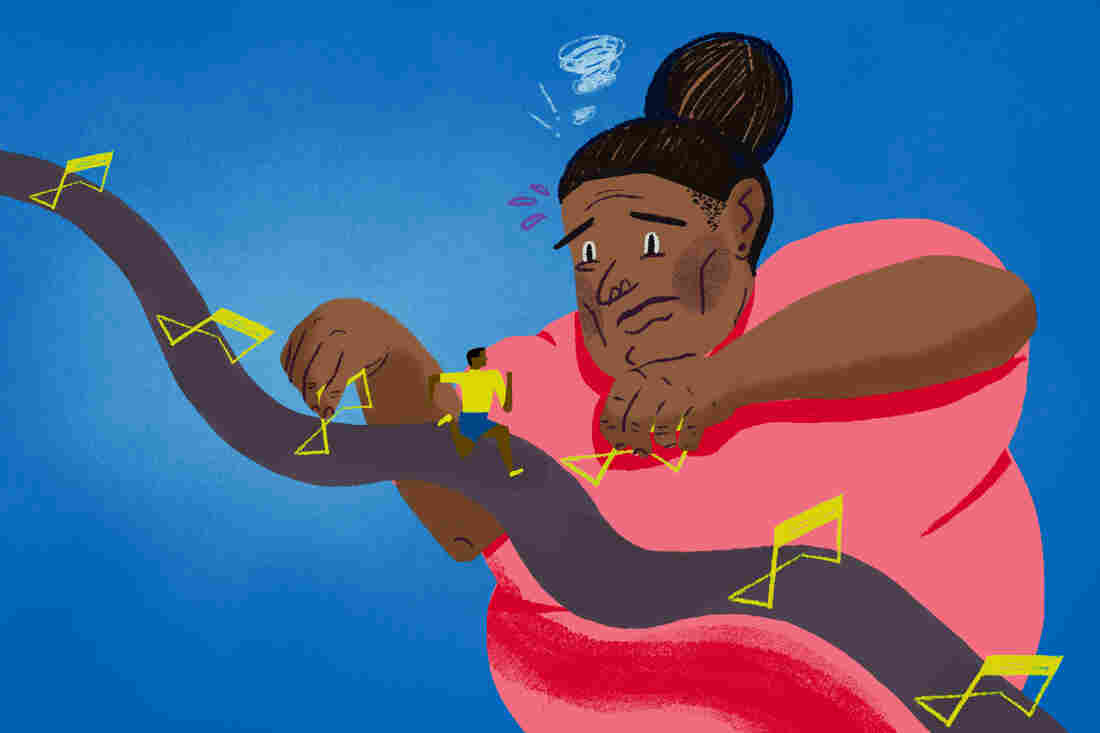 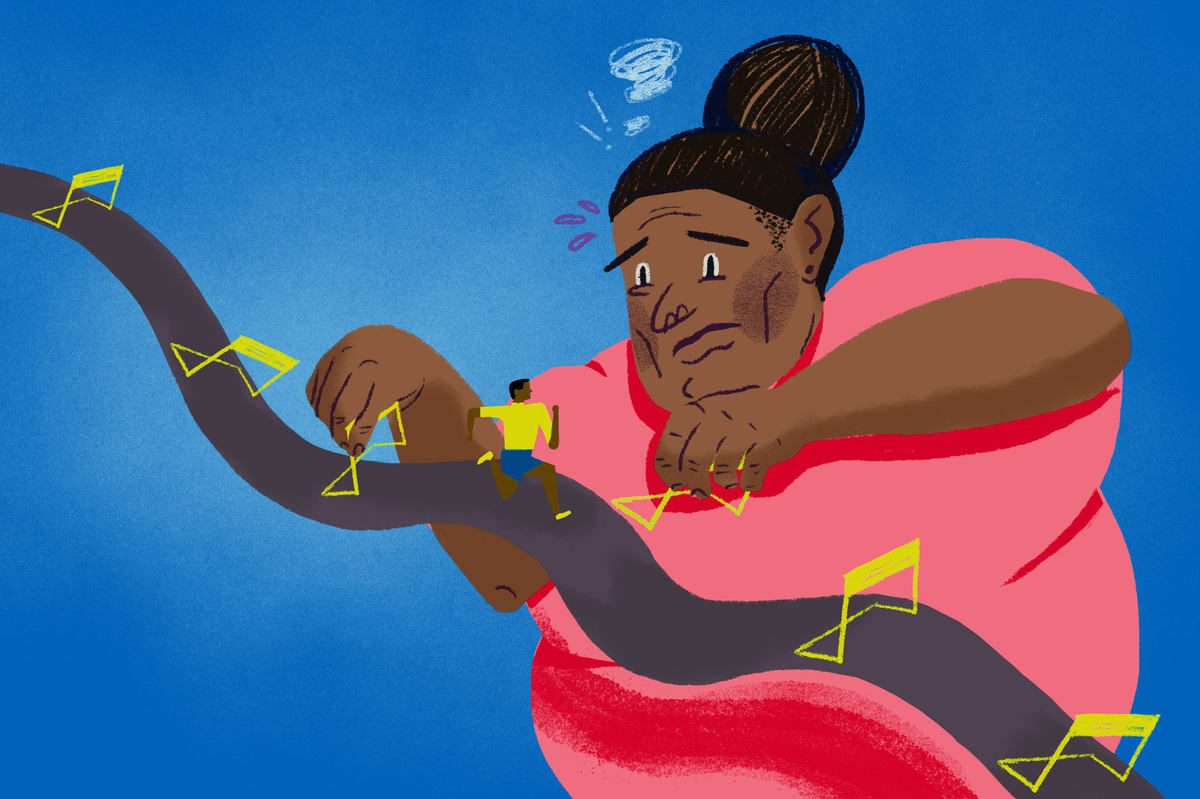 A version of this interview ran in 2015.

Have you ever paid your kid for good grades? Have you driven to school to drop off a forgotten assignment? Have you done a college student's laundry? What about coming along to Junior's first job interview? 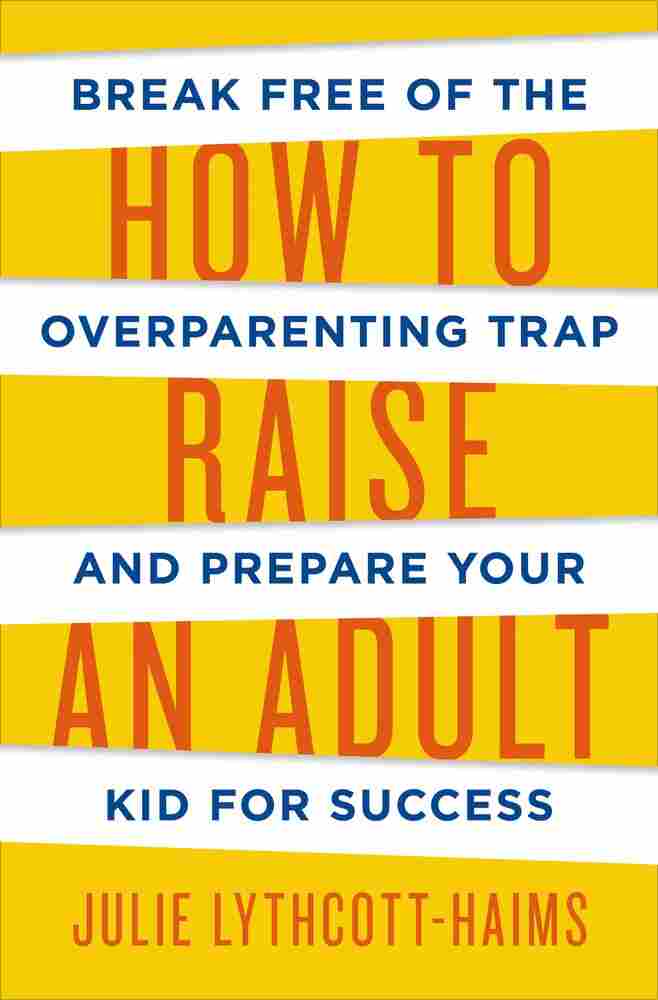 How to Raise an Adult

These examples are drawn from two bestselling books — How to Raise an Adult by Julie Lythcott-Haims and The Gift of Failure by Jessica Lahey. Both are by women writing from their experiences as parents and as educators. Lahey is a teacher and a writer for The New York Times and The Atlantic, currently at work on a new book about teens and addiction. Lythcott-Haims was the longtime freshman dean at Stanford; in 2017, she published the memoir Real American and is working on a sequel to How to Raise an Adult about "how to be an adult."

The books make strikingly similar claims about today's youth and their parents: Parents are "too worried about [their children's] future achievements to allow [them] to work through the obstacles in their path" (Lahey) and "students who seemed increasingly reliant on their parents in ways that felt, simply, off," (Lythcott-Haims).

What is at the core of what's happening with kids and parents today?

Jessica Lahey: Kids are anxious, afraid and risk-averse because parents are more focused on keeping their children safe, content and happy in the moment than on parenting for competence. Furthermore, we as a society [are] so obsessed with learning as a product — grades, scores and other evidence of academic and athletic success — that we have sacrificed learning in favor of these false idols.

Julie Lythcott-Haims: We parents are overprotecting, overdirecting and doing a lot of hand-holding, ostensibly in furtherance of kids' safety — physical, emotional — and security — emotional, academic, reputational, professional, financial. But also in furtherance of our own ego. Our kid becomes chronologically adult but still expects us to tell them what to do and how to do it, and is bewildered by the prospect of having to fend for themselves as an actual independent human. God help them when we are gone. 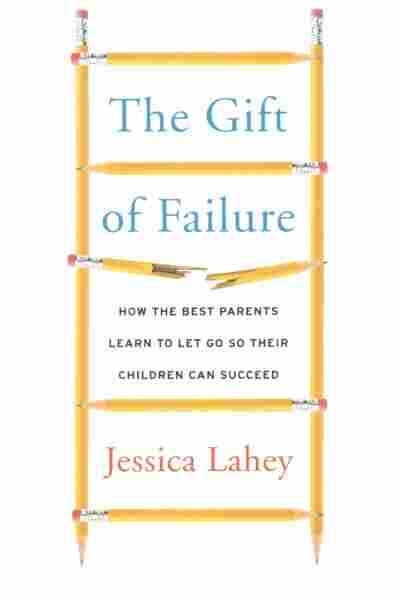 The Gift of Failure

How are schools playing into this dynamic?

Lahey: Teachers and administrators complain about parents, but we helped create this frenzy ... Teachers have come to accept that parents interfere and co-opt school projects and have begun to take that for granted when grading.

Lythcott-Haims: The other way in which high schools in particular play into the dynamic is during the college admission process, where they feel judged based on the brand names of the colleges their seniors get into, and their incentive is to brag about that.

What can schools (Jessica) and colleges (Julie) do differently to promote a culture of independence and achievement?

Lahey: Schools and parents need to stop blaming each other and work together to show children that we value learning. We can talk about the importance of education all we want, but our kids are too smart to fall for that hypocrisy. As long as we continue to worship grades over learning, scores over intellectual bravery and testable facts over the application of knowledge, kids will never believe us when we tell them that learning is valuable in and of itself.

Lythcott-Haims: Some schools have an explicit policy against parents doing kids' homework and in favor of kids raising issues and concerns themselves rather than relying on their parents to do so. These schools are part of the solution.

Some colleges kowtow to this over involvement of parents in the lives of college students, but they're the exception. Some schools are taking a proactive approach to this problem by trying to normalize struggle, such as the "Resilience Project" at Stanford that shows videos of professors, students and alumni talking about their own failures. Some legitimize these matters further by embedding it into the curriculum through classes and workshops on positive psychology, such as Stanford's course "The Science of Well-Being" or Harvard's mindfulness workshops offered in small groups in the residences.

What are the worst-case scenarios here? What's so bad about a little coddling before our kids hit the cold, cruel world?

Lythcott-Haims: I'm all for love between parent and child from now until forever. What I'm concerned about is when coddling means a kid doesn't acquire the skills they're going to need out in the real world.

I get the sense from reading the reactions to your books that parents want to find a way out of this, but they don't always know how — and you both have shared that you feel that you yourselves have been implicated in this kind of "overparenting" at times. What do you tell other parents?

Lahey: I simply wrote the book I needed but could not find on bookstore shelves. I read everything — all the books, academic articles, dramatic headlines, and while they all clarified that I was going about this whole parenting thing wrong, no one offered a strategy. I felt called to action but had no way forward. That's the book I wrote, one-third research, two-thirds strategy, and I hope it gives other parents a way forward, too.

Lythcott-Haims: Look, once upon a time I was a finger-wagging dean tut-tutting parents for being so involved in the lives of their college freshmen. I thought, "What's the matter, folks? Don't you trust your kid can do this, just like you were able to do? "Then when my own kids were 8 and 10, I realized I was still cutting their meat. I got the connection between overinvolved parenting in childhood and not being able to let go at 18.

Three things parents can do right away:

Lahey: Julie made me giggle a little there. I'm forever asking parents to stop saying "we" when it comes to the college-application process. I was talking to a former student's mother about her son's essay on the phone (I know, I know, Exhibit A, but I was invested in educating that mother) and I reminded her about adopting a "he" versus "we" and "his" versus "ours" mindset when it came to his college application. Not five minutes later, she told me she "just wanted to double-check our essay one last time before hitting 'send' on our application." Oy vey. I had to concede defeat on that one.

How do you respond to the criticism that the problems you're describing affect only privileged kids?

Lahey: Guilty ... However, just because some kids are suffering more than others from a particular kind of trauma — whether that's poverty or depression or anxiety — that does not mean that the trauma is not worth our time or our ink. The good news is that the effects of high anxiety and academic pressure are far easier to heal than poverty, violence and childhood trauma.

Lythcott-Haims: It's a true statement and I don't see it as criticism, actually. If the kids subjected to this type of parenting weren't suffering greater rates of anxiety and depression than the general population, then maybe we could wave this off as not-a-real problem. But they are suffering; there's no way around that fact.

In the years since these books were first published, both Lahey and Lythcott-Haims have traveled widely to speak to parents and school groups and audiences like TED. They both say that much has changed.

Lahey: I've talked to thousands and thousands of kids, parents and teachers about how parenting styles affect learning, and I have to say: I'm optimistic. The parents who show up at Gift of Failure events are eager to learn and do better for their kids. They want their kids to feel connected and competent and are willing to do what it takes, even if that means giving up some control over their kids' lives.

Lythcott-Haims: I used to spend a lot of time trying to convince parents that overparenting exists, and is problematic, but I don't have to do that anymore. Everyone seems to know someone in their own family or friend group who's doing it, even if they can't quite face it in themselves ...

What hasn't changed is that parents still say, "Aren't we just doing what we have to do in order for our kids to succeed in this system?" In other words, they use high school and college admission requirements as their excuse for overparenting. My response is: If "the system," or the norms in your town, are impeding your kid's development into a whole, healthy human who can do for themselves, you have to be brave enough to opt out.