Accessibility links
The Most Popular High School Plays And Musicals 2019 : NPR Ed Annie is out and Mamma Mia! is in, according to the new high school theater rankings from Dramatics magazine. The magazine has been publishing its list since 1938.

NPR Ed published the first-ever database of the most popular high school plays and musicals in the U.S. in July 2015. Today, the 2019 numbers are out, so we've updated our original story. 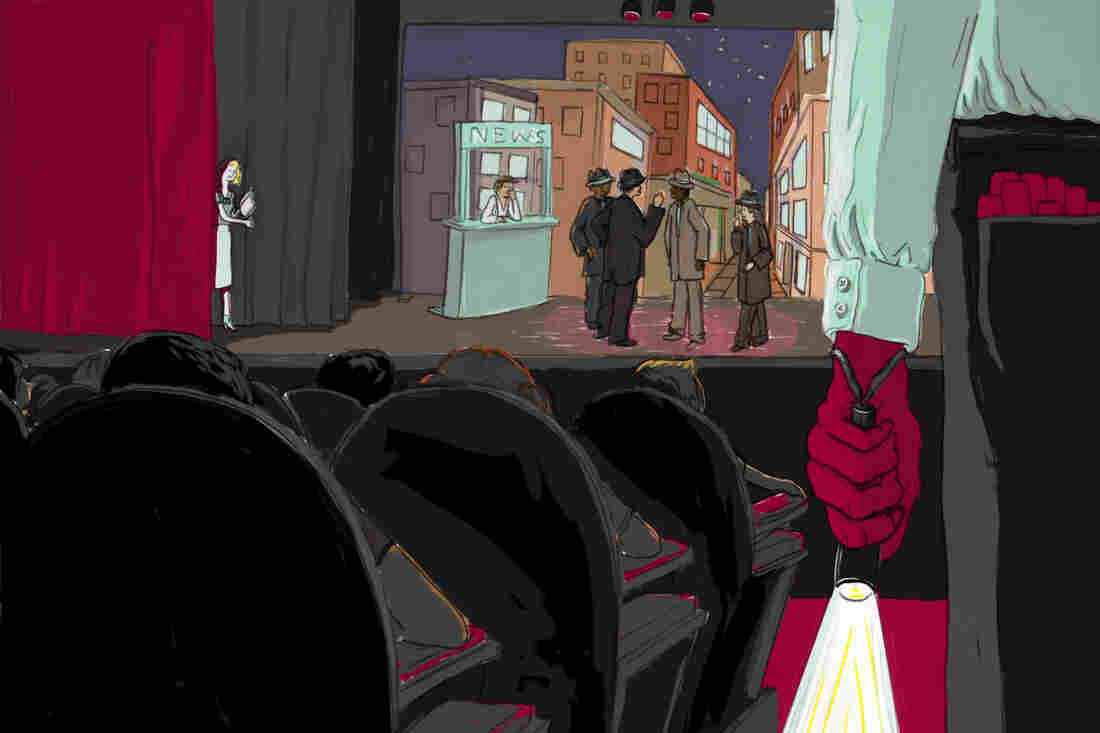 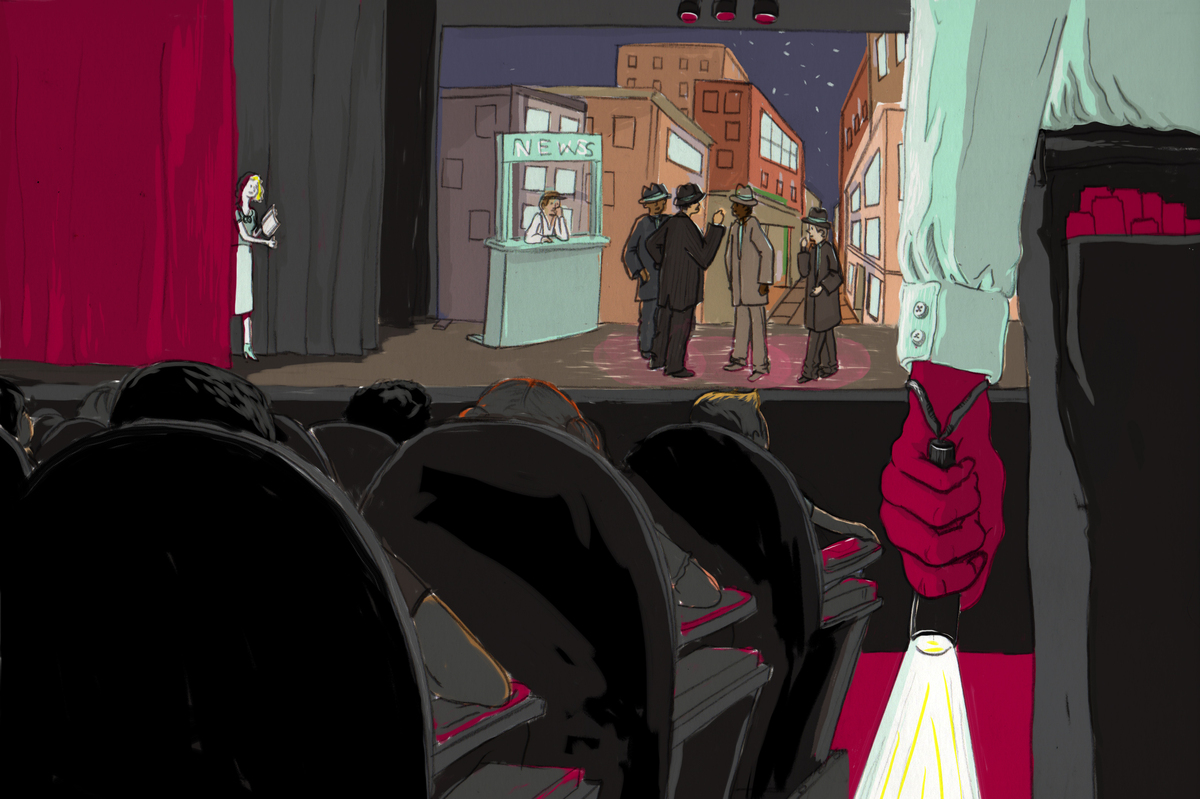 Annie is out and Mamma Mia! is in, according to the new high school theater rankings from the Educational Theatre Association. The top spot for musicals went to The Addams Family, a show that's been hanging around the top 10 list for the last decade. Mamma Mia! was the second most-popular, making its first appearance on the list (the rights for schools recently became available). Newsies is also new to the top 10 list — making its debut at number 6.

For full-length plays, Almost, Maine, again, topped the list. That's not a surprise: The collection of two-person scenes by John Cariani has been the most popular production for high schools this decade. This year is the play's fifth year in the No. 1 spot.

It's appealing to high schools because it's adaptable, says Rebecca Skrypeck, the theater director who oversaw a production of the play at Springfield High School in Springfield, Vt.

The new data didn't have a big impact on our decade leaders, but the order of popularity shifted slightly.

Even though I myself did not bask in the glow of the high school stage, I do have fond memories of working behind the scenes, as stage crew. Dressed in black, I rushed the bed onstage for Tevye's dream sequence in Fiddler on the Roof.

I've also spoken with many people who weren't involved in theater at all but can still — for some reason — remember the shows their schools performed.

There's just something about the high school stage.

All of this got me wondering: What are the most popular high school plays and musicals?

As it turns out, the answer is in Dramatics — the monthly magazine for theater students and teachers. It's been publishing an annual ranking of the most popular high school plays and musicals since 1938.

No one had ever compiled the data. The information wasn't even digitized. So in the winter of 2014, Don Corathers, the magazine's editor, began digging through the archives for hard copies of each original issue — nearly 100 pages in all.

During the process, he wrote to explain a delay: "What's taking so long, other than the distraction of publishing a magazine, is that we have to locate the articles in bound copies in order to scan them."

Eventually, he found them all, made copies — a huge stack — and mailed them to the NPR Ed team here in Washington, D.C. And last year, NPR Ed compiled the data. Today, we've updated the collection. 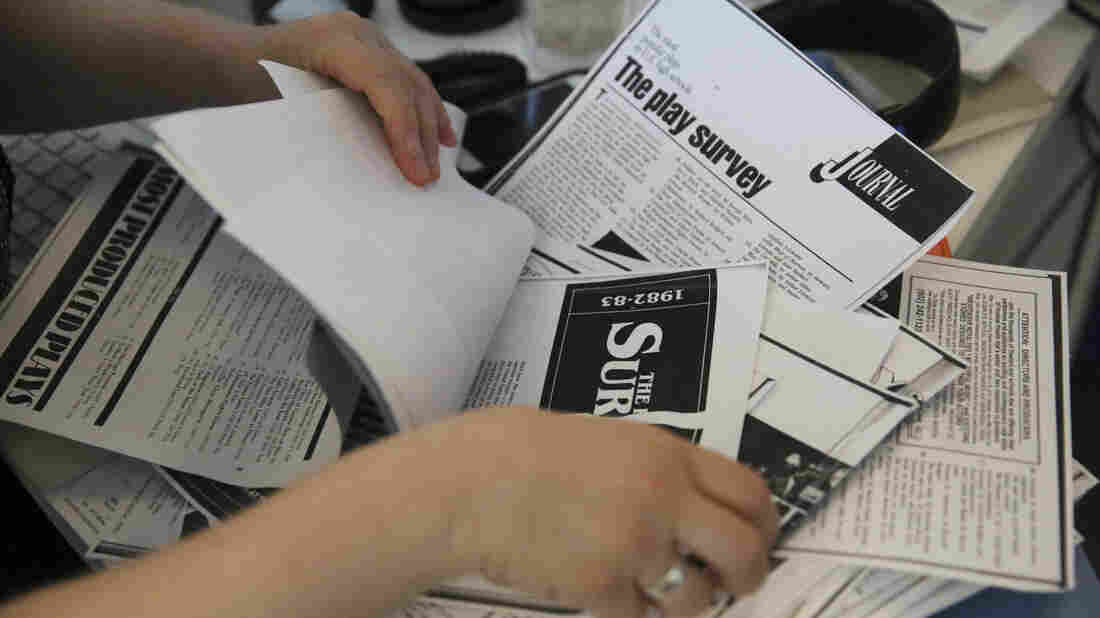 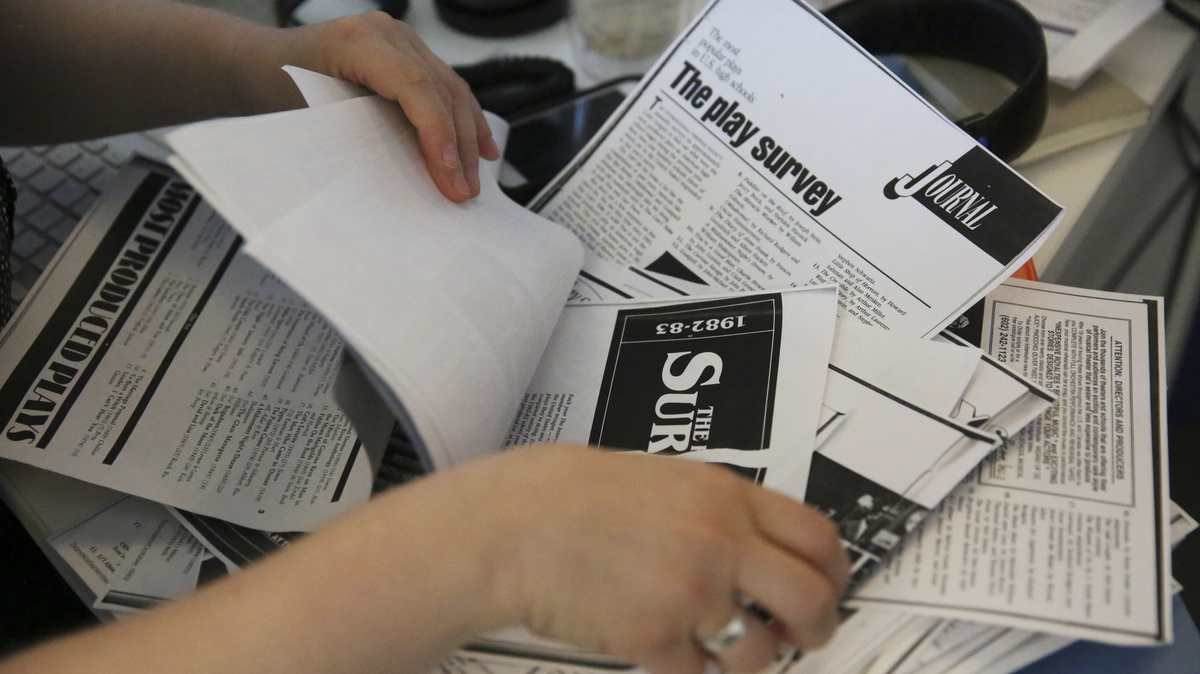 The NPR Ed team analyzed more than 100 pages of data from old issues of Dramatics magazine.

Over the past 78 years, the most popular plays have consistently been Our Town and You Can't Take It with You, according to our analysis.

"Most high school teachers need a big cast, lots of female roles, and something that won't scare your grandma," says Corathers, who has been with Dramatics since 1979.

For both plays: check, check and check.

Indeed. Even into the 1980s it was the most-produced high school play in America, topping the list every year that decade but one, 1982, when it fell just short of Our Town.

One thing is obvious: These plays are old.

"In the '60s the language and subject matter changed," explains Corathers. "It was also excruciatingly expensive to put on a play, so new plays had small casts. People were just not writing plays that could be produced in high schools."

In 1976 — noticing that schools were eschewing new for old — the magazine's editors wrote an op-ed. They urged schools to produce more contemporary works.

"Only four plays are fresh to the list this year," editor Thomas Barker bemoaned. "Four of sixty-eight."

Barker's argument: Theater should reflect society, and society had changed.

A year later — with little movement in the rankings — the editors backed down:

"No more going out on limbs, no more coaxing, no more labored analysis," they wrote. "We will let the charts speak for themselves."

And Corathers believes that, even today, those old staples of the stage are still relevant. Good theater is good theater, he says, no matter when it was written.

Looking at the nearly 80 years of data, another trend stands out: More often than not, popular plays stayed popular over time.

Corathers offers this explanation: School theater directors and educators use the magazine's survey to find ideas for next year. The rankings make it easy for a theater director to sell the school's principal on a safe slate.

Musicals didn't really make waves in rankings until 1960. But Bye Bye Birdie and Oklahoma! have been the most popular titles ever since.

In recent years, musical tastes appear to have shifted, with more contemporary titles moving up the list.

Disney Theatrical plays a substantial role. "Live theater is adapting animated films," says Corathers, pointing to Beauty and the Beast. "They are instantly family-friendly. They are familiar stories with great songs and lovely music."

In 2009, Dramatics noted that Memorial High School in Houston was on trend as it performed Disney's Beauty and the Beast — the top-ranked musical of the current decade.

But don't retire the standards just yet. During the 1963-64 school year, the magazine highlighted a performance by Preston High School in Preston, Idaho, of Bye Bye Birdie — the fourth most popular musical of the 1960s. It then cracked the top five in the '70s, '80s, '90s and 2000s.

The rights to perform

One last tidbit. The popularity of many productions (especially musicals) seems to depend almost entirely on licensing. High schools can't produce a show until it has run its course on Broadway and in regional theaters.

In 1975, the amateur performance rights for Godspell became available, and it's rumored that the licensing agency's telephone switchboards were jammed for days after. That year, Godspell was the top high school musical.

Same's true for Les Miserables. The school version was released in 2002. And by 2003, it had cracked the top of the list.

For many of these years, the Dramatics data set for high school productions served as more of an index than a comprehensive ranking. Our own Bob Mondello (movie critic, yes, but also a theater aficionado) reminds us that "the Educational Theater Association is only polling its member schools in the lists it prints in Dramatics. The organization had 500 members in 1938; it has close to 5,000 today."

Corathers estimates about 12,000 high schools in the U.S. have drama programs.

For 2017, the survey's reach widened, with more than 3,000 schools responding. For the first time, the survey asked how many people came to see them. The answer? Nearly 50 million.

In a spreadsheet, we compiled separate lists of the plays and musicals listed in Dramatics' annual survey. Because of inconsistencies in the lists over time (some years included the number of schools while others listed only a rank), we scored shows according to their rank in a given year: 15 points to the No. 1 show, 14 points to the second, and so on. Any show that ranked below 14 was awarded 1 point. For more information on this project, email npred@npr.org.