Accessibility links
Election 2008 In-depth coverage of the 2008 presidential election, Democratic and Republican candidates, and primary elections and caucuses. Listen to audio and video reports from the campaign trail. Interactive features include a primary calendar and an interactive election map.

January 23, 2009 • If you've never heard of Bettye LaVette, the soul singer who belted out "A Change Is Gonna Come" with Jon Bon Jovi at the Inauguration Celebration at the Lincoln Memorial on Jan 18., you may be wondering why.

January 23, 2009 • Although many Americans heard Barack Obama's inauguration speech, they probably weren't listening for plyptotons and catachresis — but Geoff Nunberg was.

January 20, 2009 • Street artist Shepard Fairey created the iconic red, white and blue Obama illustration that became the unofficial poster of the campaign. Although his campaign poster never became official, Fairey has been commissioned to design the official poster for the inauguration. 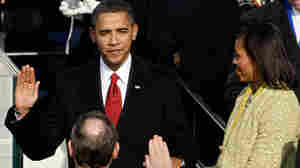 January 20, 2009 • "Today I say to you that the challenges we face are real. They are serious and they are many. They will not be met easily or in a short span of time. But know this, America -- they will be met," President Barack Obama said in his inaugural address.

November 20, 2008 • President-elect Barack Obama is considering Arizona Gov. Janet Napolitano as head of the Department of Homeland Security. Kent Alexander, who went to law school and served as U.S. attorney with Napolitano, talks about the her qualifications.

November 13, 2008 • Howard Dean, former presidential candidate and chairman of the Democratic National Committee, implemented the "50-State Strategy" to help the Democrats win big in 2008 — and it appears to have worked. This campaign approach doesn't write states off as "unwinnable."

Where Does The Republican Party Go From Here?

November 11, 2008 • After George Bush's unpopular presidency and John McCain's decisive defeat, there is a battle underway for the soul of the Republican Party. Conservative leaders weigh in on how to reinvigorate the GOP.

Where Does The Republican Party Go From Here?

Making Sense Of The Election From Baghdad

November 7, 2008 • While his family was at home watching the U.S. election results, Capt. Nate Rawlings was watching CNN on a military base in Iraq. He discusses his experience and his soldiers' reactions to Barack Obama's victory.

Making Sense Of The Election From Baghdad

November 6, 2008 • Robert Kuttner has reported on elections for more than 30 years. His new book, Obama's Challenge, looks at the Herculean obstacles the president-elect faces — and what it will take to tackle them.

You Wanted Change? It's Time To Help

November 6, 2008 • Civic improvements are accomplished by individuals, not primarily in a "top down" manner. Why not ask — or at least ponder — what we can do to help?

How Obama Mapped Out His Path To Power

November 5, 2008 • President-elect Barack Obama has followed an extraordinary path that lifted him from the category of "flash in the pan" first-term senator to the Oval Office in less than four years. His well-organized campaign always seemed to know how to respond to crises.

How Obama Mapped Out His Path To Power

November 5, 2008 • John McCain faced long odds in the presidential election, but his advisers say he stood a chance until the global economic meltdown. His handling of the crisis lost him support. And his choice of Sarah Palin as his running mate affected his campaign.

November 5, 2008 • Support for Barack Obama is strong among many in Iraq, but Iraqi and American officials agree that the situation in the country will not suddenly change. Word of Obama's win became a prime topic of conversation in Baghdad's markets.

November 5, 2008 • There is one thing we can proclaim today, a day for poetry and song: The election of Sen. Barack Obama as president of the United States of America means that "The Ultimate Color Line" has, at long last, been crossed.

November 5, 2008 • Latino participation in the election increased dramatically in the Western states Democrats targeted. The Obama campaign, Spanish-language media outlets and unions pushed hard to get out the vote in Latino communities and the effort may have given him an edge.

Once Undecided, A Voter Reveals Her Choice

November 5, 2008 • In a conversation just days before the 2008 presidential election, Constance Griffin, 35, said that she was torn between John McCain and Barack Obama. We learn who Griffin supported — and what she thinks of the race's outcome.

Once Undecided, A Voter Reveals Her Choice

November 5, 2008 • We spent Election Night with members of the local Republican party in Cuyahoga County. It was "Christmas Eve" for some until John McCain gave his concession speech. One black Republican woman explains why she is very worried about the future of the country.